“First, let me say that I'm tired of all of this talk about ‘snubs’ — I thought for every one of [the snubs] there was a justifiable reason. What no one wants to say out loud is that ‘Selma’ is a well-crafted movie, but there's no art to it. If the movie had been directed by a 60-year-old white male, I don't think that people would have been carrying on about it to the level that they were. And as far as the accusations about the Academy being racist? Yes, most members are white males, but they are not the cast of ‘Deliverance’ — they had to get into the Academy to begin with, so they're not cretinous, snaggletoothed hillbillies. When a movie about black people is good, members vote for it. But if the movie isn't that good, am I supposed to vote for it just because it has black people in it? I've got to tell you, having the cast show up in T-shirts saying ‘I can't breathe’ [at their New York premiere] — I thought that stuff was offensive. Did they want to be known for making the best movie of the year or for stirring up s—t? ‘American Sniper’ is the winner of the year, whether or not it gets a single statuette, because for all of us in the movie industry — I don't care what your politics are — it is literally the answer to a prayer for a midrange budget movie directed by an 84-year-old guy [Clint Eastwood] to do this kind of business. It shows that a movie can galvanize America and shows that people will go if you put something out that they want to see. With regard to what it did or didn't leave out, it's a movie, not a documentary. I enjoyed it, I thought it was well done, and I can separate out the politics from the filmmaking.” 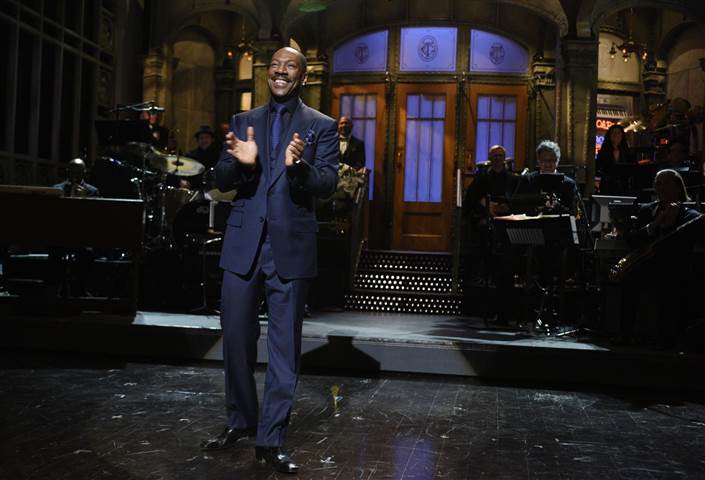 “As the A-list cast began to prep for Sunday’s primetime event, which drew over 23 million viewers, Macdonald pulled Murphy aside in a dressing room for an hour and tried to persuade him to do the ‘Celebrity Jeopardy’ sketch. ‘When it’s over, I’m convinced he’ll do it,’ thought the comedian.Adding to the ‘SNL 40’ drama over the weekend was the fact that Bill Murray was golfing across the country. ‘With Bill Murray, golf always comes first,’ Macdonald said.To the relief of ‘SNL’ creator Lorne Michaels, Murray eventually flew to New York to participate in sketches like his hilarious ode to ‘Jaws.’ Murphy, however, opted against the laughs.According to Macdonald, he didn’t want to further shame Cosby–public enemy No. 1 on the Internet–who already faces a litany of sexual assault allegations for drugging and raping dozens of women. ‘He knew the laughs would bring the house down,’ Macdonald said of his decision. ‘(But) Eddie decides the laughs are not worth it. He will not kick a man when he is down.’” 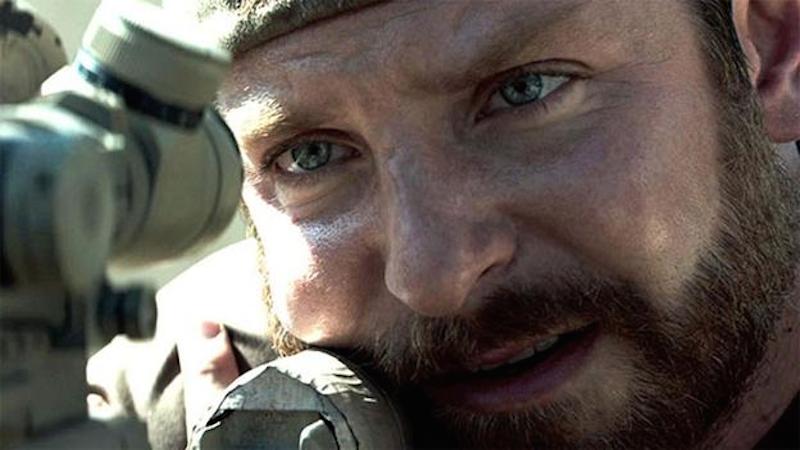 "'Selma' and 'American Sniper': Is accuracy important?": BBC's Tom Brook offers his take on the controversy.

“During Oscar season it’s important that any charges of fabrication or misrepresentation are addressed rapidly – or else they might stick.  Two years ago members of the US Senate Intelligence Committee took issue with ‘Zero Dark Thirty,’ claiming that it was grossly inaccurate and misleading in its suggestion that torture led to the location of Osama bin Laden. There was never an effective early rebuttal by the studio to that accusation – and the film, which had been seen as a strong Oscar contender, never recovered. ‘Zero Dark Thirty’ took home just one trophy. ‘My feeling is that a lot of these discussions are actually pretty interesting because they encourage people to look beyond the surface of the movie,’ says [Scott] Foundas. ‘I think it’s great to talk about what a film’s politics are, what kind of ideologies are operating in the film, what may or may not be implied by omitting something or including something.’ Despite all the heat that’s been generated by the recent scrutiny of fact-based movies it’s unlikely that any of it will have an impact on the outcome on the Oscars race itself because the two frontrunners for best picture this year, ‘Boyhood’ and ‘Birdman,’ are both works of fiction and therefore immune to charges that they may be less than truthful. Filmmakers will always want to tell real stories and to sell their work they will sometimes claim the authority of fact. Yet they also want the license to fictionalize and still maintain what they’ve put together amounts to the truth. But it’s a concept of truth-telling that just doesn’t hold up for a broad swath of shrewd moviegoers who are just a Google search away from fact-checking these films.” 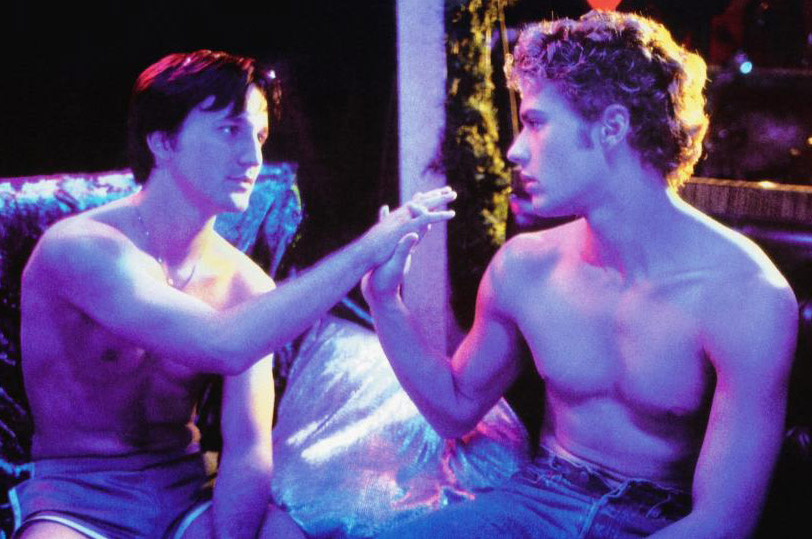 "'54' Bombed in 1998. Now It's Been Resurrected as a Cult Gay Classic.": Vulture's Louis Jordan looks back on Mark Christopher's once-forgotten film.

“Like Studio 54 itself, the film was suffused with homoeroticism. ‘It was the first time I had to go to the gym for a movie,’ remembers Breckin Meyer, ‘because the wardrobe was a satin pair of running shorts and an Italian horn necklace — and we were filming in Toronto in the middle of winter.’ One of the film’s key scenes was a kiss between real-life best friends [Ryan] Phillippe and Meyer — Meyer’s first onscreen kiss. The scene was later cut — deemed too risqué for the mass-market crowds to which the studio hoped to appeal. ‘There was a part of us that was a little sad nobody ever got to see it,’ says Phillippe of the kiss, which was restored for the director's cut. ‘We did something that was relatively bold for two young male actors, and we took pride in the places that the original story went. So, it’s nice that people finally get to see Breckin and me kiss.’ After shooting wrapped, Christopher and Percy assembled a rough edit of the film, which they screened for Miramax in February of 1998. Christopher says the studio loved that cut, but still wanted to audience-test it. Phillippe was a relative unknown when cast, but the teen horror hit ‘I Know What You Did Last Summer,’ released while ’54’ was being shot, had turned him into a burgeoning teen idol. Mike Myers was fresh off of ‘Austin Powers,’ and Neve Campbell had just scored with ‘Scream 2,’ a role that had helped move her away from her prim ‘Party of Five’ image. A cast that felt iffy when filming began suddenly seemed like a box-office draw, particularly for teens. (Not exactly Christopher's intended audience.)” 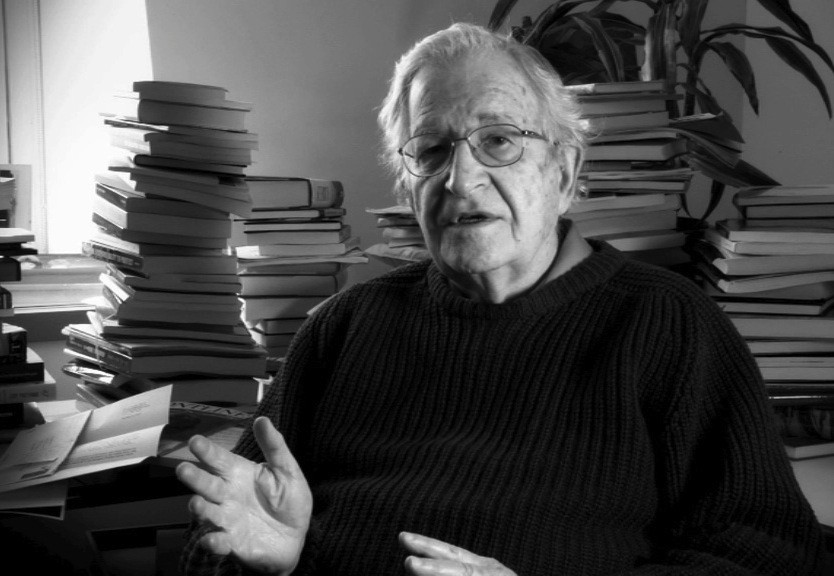 "The World of Our Grandchildren": At Jacobin Magazine, Noam Chomsky explains how America paved the way for ISIS.

“Britain, before the US, had typically preferred radical Islamism to secular nationalism. And when the US took over, it essentially took the same stand. Radical Islam is centered in Saudi Arabia. It’s the most extremist, radical Islamic state in the world. It makes Iran look like a tolerant, modern country by comparison, and, of course, the secular parts of the Arab Middle East even more so. It’s not only directed by an extremist version of Islam, the Wahhabi Salafi version, but it’s also a missionary state. So it uses its huge oil resources to promulgate these doctrines throughout the region. It establishes schools, mosques, clerics, all over the place, from Pakistan to North Africa. An extremist version of Saudi extremism is the doctrine that was picked up by ISIS. So it grew ideologically out of the most extremist form of Islam, the Saudi version, and the conflicts that were engendered by the US sledgehammer that smashed up Iraq and has now spread everywhere. That’s what [CIA officer Graham] Fuller means. Saudi Arabia not only provides the ideological core that led to the ISIS radical extremism, but it also funds them. Not the Saudi government, but wealthy Saudis, wealthy Kuwaitis, and others provide the funding and the ideological support for these jihadi groups that are springing up all over the place. This attack on the region by the US and Britain is the source, where this thing originates. That’s what Fuller meant by saying the United States created ISIS.” 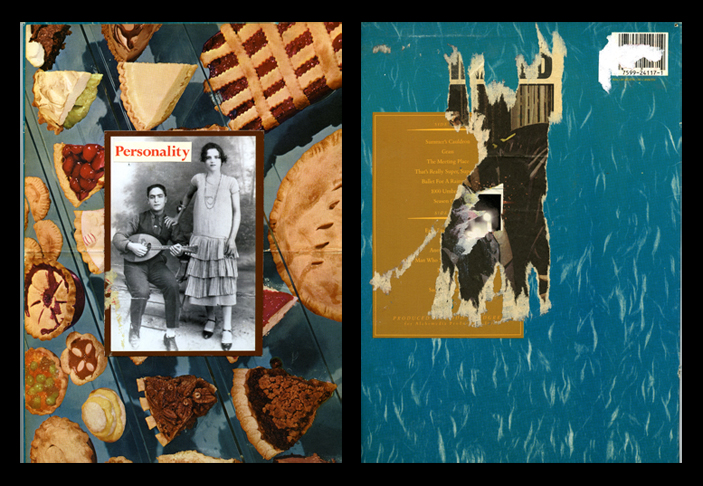 This 2013 collage, "The Death of Cpt. America," is one of many provocative artworks on display on the new site of accomplished mixed media artist/actor/musician Jeremy Blackman (a.k.a. Stanley Spector in "Magnolia").

WORLD OF TOMORROW : Teaser trailer from don hertzfeldt on Vimeo.