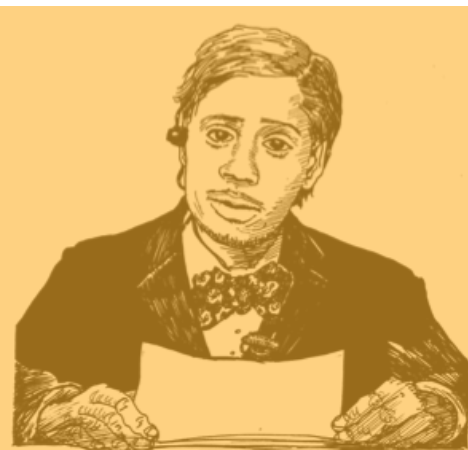 "If He Hollers Let Him Go."   Rachel Gaadzi Ghansah for The Believer on the (cultural) search for Dave Chappelle 10 years after he left his own show.

"Besides race, three things make Dave Chappelle’s comedy innovative and universal: wit, self-deprecation, and toilet humor. This is the same triumvirate that makes Philip Roth’s writing so original. Woody Allen’s movies, too. Chappelle had a keen sense of the archetypal nature of race, and understood just as acutely how people work on a very basic level. In a Chappelle’s Show sketch about the reality show Trading Spouses, a black man sits on a toilet in a white family’s house and flips through a copy of People magazine while taking a dump. He looks up: 'Who the fuck is Renée Zellwedger?' In another sketch, a stodgy, Waspy white man (Chappelle in whiteface) lies in bed with an attractive black woman in classy lingerie. He wants her. But he wants to make love with his pajamas on. Chappelle did such a good job of truth-telling, on every subject, that nobody knew what to do when he just stopped talking. In no way did his quitting conform to our understanding of the comic’s one obligation: to be funny. To talk to us. To entertain us. To make us laugh. We aren’t used to taking no for an answer, to being rejected, especially not by the people who are supposed to make us smile. Especially not by black men who are supposed to make us smile." 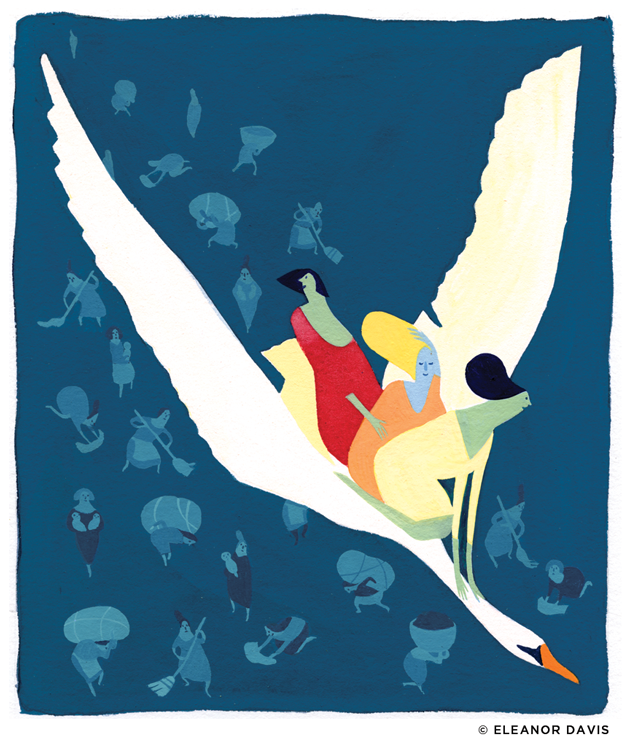 "Facebook Feminism, Like It or Not." For The Baffler, Backlash author Susan Faludi goes to town on the vast limitations of Sheryl Sandberg's "lean in" manifesto.

"If you were waiting for someone to lean in for child care legislation, keep holding your breath. So far, there’s no discernible groundswell. When asked why she isn’t pushing for structural social and economic change, Sandberg says she’s all in favor of “public policy reform,” though she’s vague about how exactly that would work, beyond generic tsk-tsking about the pay gap and lack of maternity leave. She says she supports reforming the workplace—but the particulars of comparable worth or subsidized child care are hardly prominent elements of her book or her many media appearances. Sandberg began her TED Talk in December 2010, the trial balloon for the Lean In campaign, with a one-sentence nod to “flex time,” training, and other “programs” that might advance working women, and then declared, “I want to talk about none of that today.” What she wanted to talk about, she said, was “what we can do as individuals” to climb to the top of the command chain. This clipped, jarring shift from the collective grievances of working women to the feel-good options open to credentialed, professional types is also a pronounced theme in Lean In, the book." 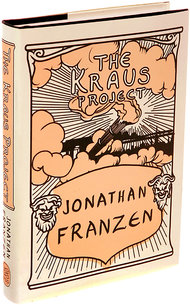 "A Translation and a Soapbox." For The New York Times, Dwight Garner details how the acclaimed novelist drops the ball in his nonfiction efforts, such as his newest, “The Kraus Project,” a translation and annotation of a series of essays by obscure Viennese journalist and satirist Karl Kraus. "'The Kraus Project' is more often a disheveled and talky assault on everything the author sees when he opens his laptop or clicks on a television, including, but not limited to, Facebook, smartphones, 'the high-school-cafeteria social scene of Gawker takedowns and Twitter popularity contests,' the hipness of Apple products, reality TV, Fox News, Amazon, even the “recent tabloidization” of the AOL home page. His overarching points are valuable and well made. He’s among those people, and I am sometimes among them, who have brooded over books like Sherry Turkle’s ‘Alone Together’ and are wrestling with apocalyptic doubts” and wondering whether our 'insane cultural moment will spell the end of an essential part of us.' But this book’s series of drive-by pea shootings (he pings Salman Rushdie for condescending to tweet) are beneath him. Mr. Franzen’s whole mode of being — the way he mostly runs silent and deep, issuing a novel every 10 years or so, refusing to embrace social media — was already his most incisive possible rebuke to the way he suspects so many of us live now. To watch him lean down and mess with Gawker, or with the Twitterati, is like watching a hedgehog stop to lecture a field full of foxes — Why, you’re living all wrong, you slinky omnivores — and being eaten in the process, his ribs used as toothpicks." 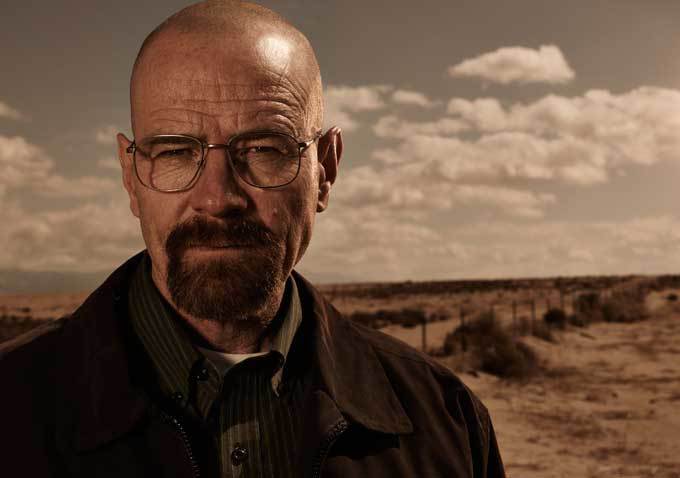 "Why 'It's Like a 13-Hour Movie' Fails to Do Justice to Great TV." For Indiewire, Ronan Doyle makes the case for TV as an art form that deserves to be considered unto itself.

"Where cinema, at its best, invites us into a world for 90 minutes or so, great television barges into ours, fostering in our minds and living with us every off-air moment like a parasite we're pleased to have. A TV show ages alongside us, its evolution acting as a benchmark for our own as we grow up in tandem with its characters. Its monopoly over the cliffhanger comes, aside from the obvious commercial concerns, as a natural extension of its integral purpose to replicate the feel and flow of real life: how often, after all, are our everyday problems immediately solved? That's perhaps never been better seen than in the 'Up' series, surely the most profound use to which TV's capability for long-form storytelling has yet been put." 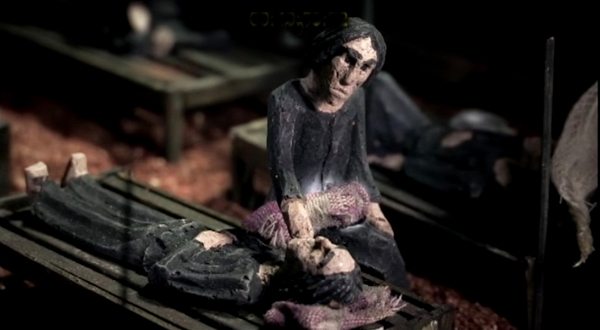 "Everything we’ve seen [at this year's VIFF] has been on some form of video—excuse me, 'digital cinema.' Apart from the occasional 35mm or HDCam show, DCP projection, after a couple of years of teething pains, is the norm. Not that this guarantees uniformity. Albert Serra’s Story of My Death, a peculiar portrait of the elderly Casanova, still looked (probably intentionally) like it was shot on VHS. The furor about festivals’ conversion to digital formats, discussed in this 2012 blog entry and extended in my little e-book, belongs firmly to history. Henceforth film festivals will be file festivals." 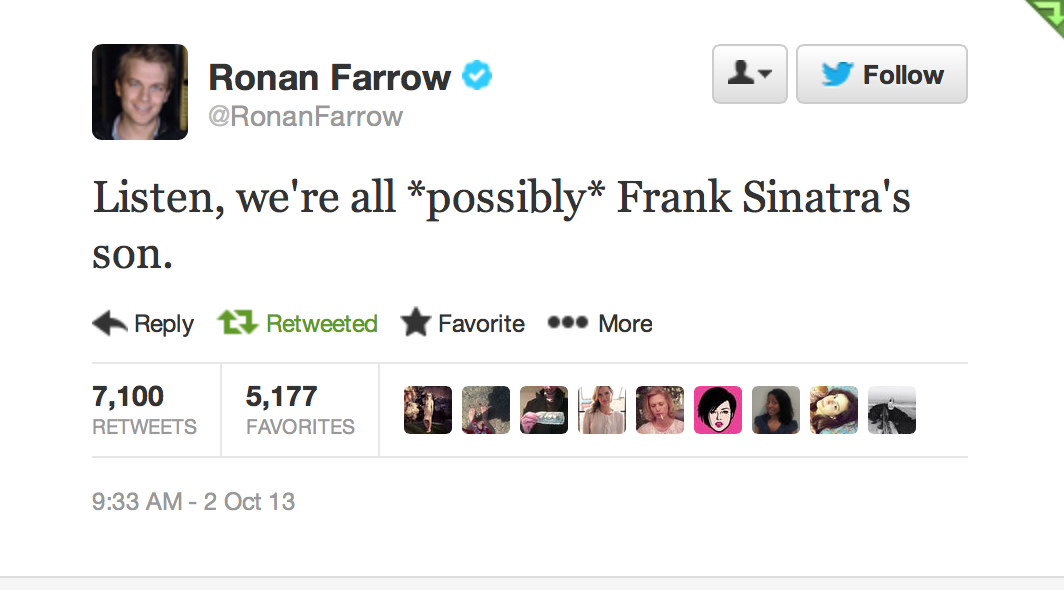 Ronan (formerly Satchel) Farrow's response to the rumors he may be the son of Frank Sinatra rather than Woody Allen.

A trailer for "The Wes Anderson Collection" by RogerEbert.com's Matt Zoller Seitz.