"The Walking Dead" and the Return of Event TV

AMC's "The Walking Dead" returns Sunday, October 13th to, once again, remind network executives of what they're doing wrong. As more and more new 2013-14 programs premiere to DOA ratings, the stark contrast between how viewers are approaching network television and how they're approaching AMC programs like "The Walking Dead" and "Breaking Bad" becomes more remarkable with each ratings release. Network programmers have to feel a bit like Rick (Andrew Lincoln) and his crew, trying to survive, but knowing it's a short-term prospect as they struggle against the barbarians at the gate. How has AMC defied the erosion of network TV ratings over the last few years? How have they broken the bell curve of the medium to not just remain stable but also see their hit shows actually become more successful?

Whereas as most network shows slowly erode over time, as more and more viewers jump ship or decide to relegate it to a lower priority in their DVR Season Pass, AMC has found a way to reverse that trend. While network median ratings continue to diminish, as fewer people watch live television every year, AMC has watched their numbers reach levels that even their most optimistic executives couldn't have imagined. Of course, quality matters above all else, but they have also found a way to get people to watch live television again by embracing social media, promoting interaction with fans, pushing live discussion, and encouraging the unpredictability that demands viewers watch on Sunday nights or risk spoilers. 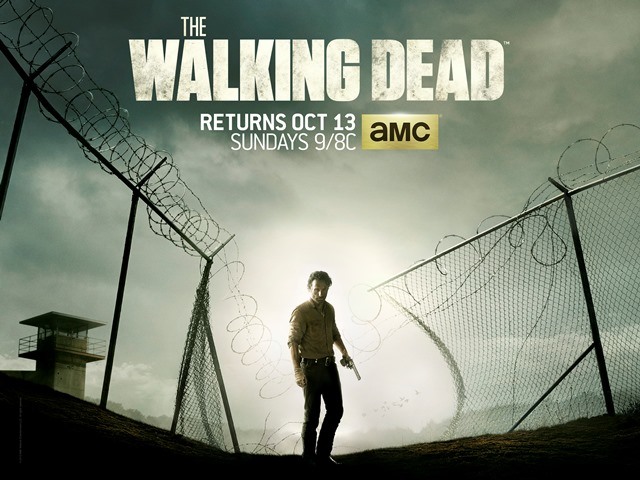 First, a little perspective. There used to be a sense that there were different metrics for network and cable TV. Something was a hit…"for cable." AMC has erased that distinction. Yes, hitting 2 million for a small, reality show is still a huge success for most cable nets, but AMC proved that the ceiling was much higher for their original programming than anyone ever expected. Just over 3 million people tuned into ABC's "Betrayal" on this past Sunday night, marking it as a likely candidate to follow "Lucky 7" into the cancellation bin. Over on AMC earlier this year, the third season finale of "The Walking Dead" broke 12 million viewers. And the episode of "Talking Dead" that followed the finale crested 5 million viewers, a higher total number than the highly-promoted series premieres of NBC's "Welcome to the Family" and "Sean Saves the World" last week. When you dig deeper into the numbers and consider the coveted youth demo differences between AMC and the networks, the story becomes even bleaker for the nets.

How does AMC do it? How do they get a show like "Walking Dead" to increase in viewers every year when even hits on the networks are in decline? The final episode of "Breaking Bad" wasn't just a "hit," it more than doubled the average of last year's episodes. The final episode of "Talking Bad" beat most episodes of the show it was recapping from its series run. 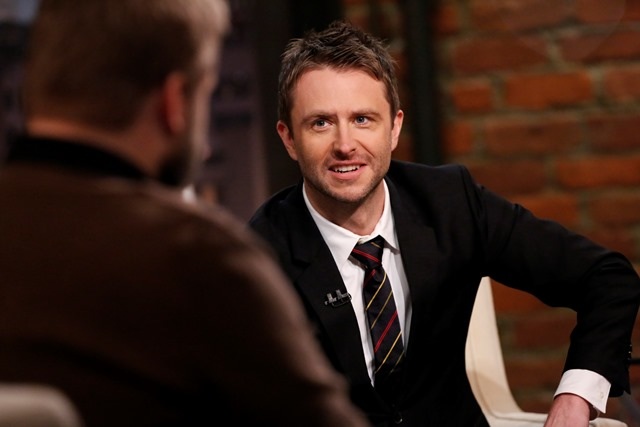 The "Talking" shows are certainly a part of it, both in the buzz they help create and what they represent about these programs. Even if people don't watch the Chris Hardwick–hosted affairs, they add to the feeling that buzz is building not around the water cooler the next morning or over the course of the week but rather that very night. In 2009, Andy Cohen, an executive producer of most of the hits on Bravo, started a discussion show called "Watch What Happens." It was deceptively simple—Let's talk live about all the crazy things that happened on our shows tonight. It worked, helping to build buzz and setting the model for AMC's "Talking" series. Even if you don't watch the recap shows, their very existence gives people the sense that they're missing out on something if they haven't seen the main shows that the "Talking" panels are discussing that night. It blurs the line between scripted television and the one thing that has proven to be erosion-proof: Live TV.

It also has helped both "The Walking Dead" and "Breaking Bad" immeasurably that both productions embraced Netflix, allowing viewers to catch up on what they missed before new episodes aired. Building buzz without a way for latecoming viewers to jump on the series bandwagon has always been a major problem for the nets. Even over the course of programs like "LOST" and "24," lots of people didn't tune in because they simply didn't know what had happened before. When the full run of "Breaking Bad" hit Netflix in time for viewers to be caught up for the final eight episodes, it only increased the inevitable smash ratings for the series finale. Being able to catch up on "Walking Dead" on the streaming service makes watching new episodes that much more attractive. 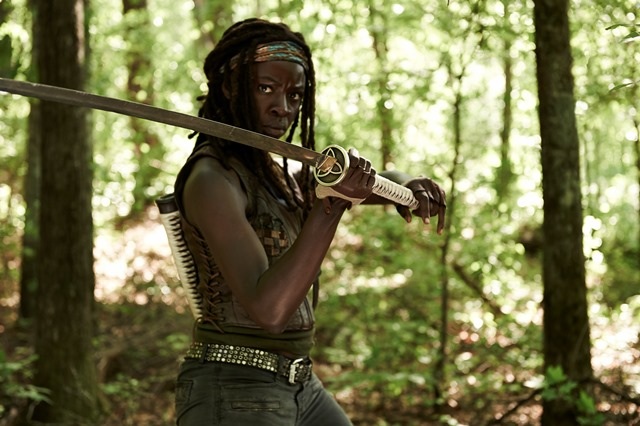 However, we should never forget that Twitter, "Talking," and texting mean nothing if viewers don't like the show. Quality is still the most important ingredient, and "Breaking Bad" would still be a critical hit without AMC-promoted hashtags, Netflix, or "Talking Bad". It's a matter of proportions. It wouldn't have been as BIG a hit without those elements and that's what the nets so often miss. Other networks have been unable to get viewers to critically-acclaimed shows like "Hannibal" largely because they've been unable to build the same buzz that AMC can. The new market requires more than advertising overload (the common approach of the broadcast nets). It requires not just something to talk about but also that feeling that we have to be watching when the program airs or else we'll be missing out on something special.

Case in point—With the deaths of Shane and Dale in their second season, the creators of "The Walking Dead" sent notice to their fans that they needed to be watching every night in order to see who was still going to be alive the following morning. It introduced a sense of unpredictability that became amplified across season three and continues to create dread in season four. "The Walking Dead" is a program that fans feel they need to watch live or else risk being assaulted with spoilers mere minutes after it ends on Twitter. Anyone is expendable, which simply hasn't been true to this degree on network television. "LOST" built buzz by killing off some major characters, but we always knew Jack, Kate, Hurley, and Sawyer weren't going anywhere. Oddly enough, the "OMG approach" to writing on AMC's biggest hits may have arguably hurt their other programs, in that viewers frequently characterized the recent, brilliant season of "The Killing" as too slow and seem to have given up entirely on "Low Winter Sun" (although one can hardly blame them, given how unfulfilling that program felt this year when compared to "Breaking Bad"). One hopes that cable shows don't sacrifice solid writing—like that last season of "The Killing"—for just running strings of "gotcha" moments, but that aesthetic of unpredictability has found a firm thematic home on "The Walking Dead," a show where it makes total narrative sense to not have any sacred characters. 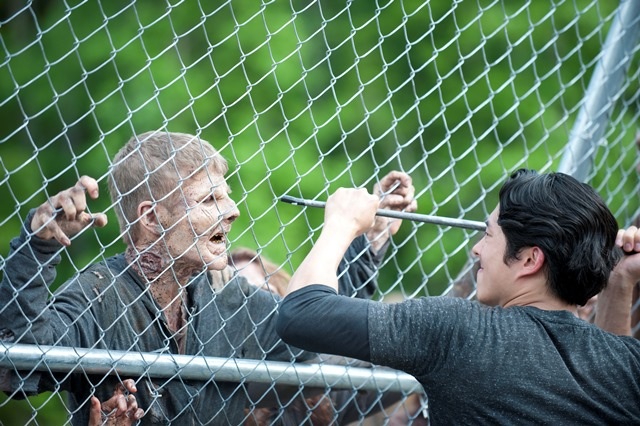 The few remaining souls on AMC's zombie hit are still in their prison sanctuary at the start of season four, now building a much bigger community, complete with younger characters who need teaching and survival training. Rick is the de facto leader, but he's still a fragile one, and a brilliantly-scripted encounter with a woman on the edge of sanity shows him what he still has to fight for. 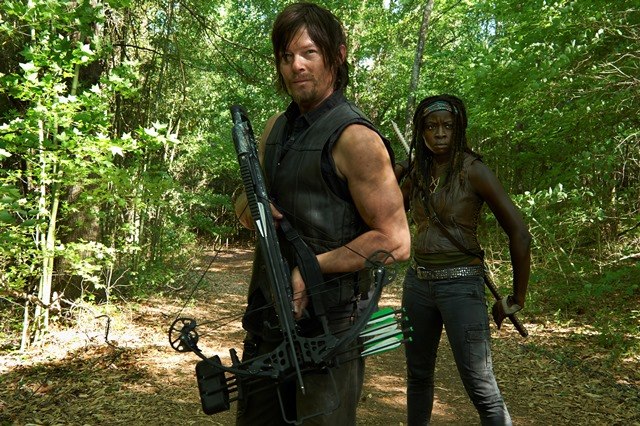 Meanwhile, Daryl (Norman Reedus) has become an idol in the community. He's the warrior of the group, deigned the best one to protect the new recruits. A deadly threat from within the prison that I won't spoil looks to dominate the first arc of the new season, one that has already received a bit of bad buzz after losing yet another showrunner in Glen Mazzara, who's now been replaced by writer Scott Gimple. The new showrunner wisely turns his first season premiere, "30 Days Without An Accident," over to director Greg Nicotero, the makeup expert who shows off his skills with a notable amount of undead effects. By the end of the episode, they're literally raining from the sky in a memorable "Did you see THAT?" moment that AMC surely hopes people will be tweeting about not later in the week, when they watch it On Demand or on their DVR, but rather that very night. And I know a few network executives who will be watching to see if they do.