The Political Idealism of Gary Ross

Who is America’s most successful political filmmaker? While most would argue divisive names like Spike Lee or Michael Moore, I’m going to nominate Gary Ross. You know his films: “Big,” “Dave,” “Pleasantville,” “Seabiscuit,” “The Hunger Games” and now “Free State of Jones,” which opened last Friday. His work routinely captures the zeitgeist, but with no indie credibility or claim to auteurship, he rarely gets the credit, and his themes and motifs don’t get discussed. This should change. A close reading of his career reveals an acuity at telling political stories that attract broad, bipartisan audiences in an increasingly polarized era. He may also be the most idealistic filmmaker working today.

Idealism is not to be confused with political purism. Purists are everywhere these days. From social media to the op-ed pages, they have to come to dominate political discourse on both sides of the aisle. Purists reject nuance in their politics. They view political compromise as counterproductive and steadfastly refuse to seek common ground on those who disagree with them. Purists are divisive; idealists seek to unite us behind something positive.

Ross is an idealist but not a purist. Before he got into directing, he was a hugely successful screenwriter, penning such feel-good hits as “Big” and “Dave.” Both films have a common thread; they are about the “redemptive power of innocence,” as Ross has put it. They depict idealistic characters who enter cynical institutions—corporate America and the White House—and return them to their more innocent roots through honesty, enthusiasm and an utter lack of guile.

“Big” and “Dave” were crowd-pleasers, and (or perhaps because) the politics that lurked underneath their crowd-pleasing stories were simple. Josh Baskin, played by Tom Hanks in “Big,” was a yuppie analogue, a grown man-child thrust into a position of economic power. While his youthful vigor may have brightened the mood of his glum co-workers, the film is still a relatively shallow probe into the corporate culture that so defined the Reagan era. The politics of “Dave” are equally superficial; the administration taken over by Dave Kovacs (Kevin Kline), a presidential look-a-like asked to secretly step in when the real president falls ill, looks, at first, a lot like a liberal fantasy. Kovacs reshapes the presidency as an apparatus of the working class, but he does so only through his everyman charisma; the film’s dismissal of the actual work of governing and consensus-building makes its ideal ruler seem more like an authoritarian strongman than the leader of a democracy.

When Ross finally got into the director’s chair, he started to atone for this simplicity. His political perspective became richer and more nuanced. No longer was he content to simply hold up idealism as a virtue. He began to explore idealism from many angles, examining how the concept is used and packaged in order to satiate the masses. 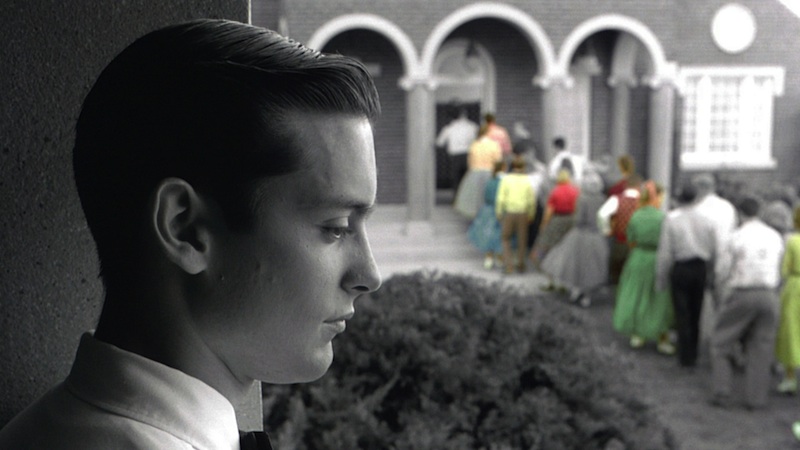 In his directorial debut, “Pleasantville,” David (played with literal wide-eyed optimism by Tobey Maguire) is an idealist in a cynical world. He doesn’t quite fit in at high school and is overwhelmed by complicated contemporary issues like global warming, so he finds comfort in the TV Land-style pleasures of the story’s eponymous TV show, a 1950s domestic comedy in which things are simple and true and right. When a magical remote control transports him and his bad-girl sister Jennifer (Reese Witherspoon) to the TV world of Pleasantville, David is initially thrilled to be living in such a wholesome place.

But over the course of the film, Ross lifts the veil on Pleasantville and finds that social order comes at a social cost. His TV mother Betty (Joan Allen) has a sexual awakening that serves as a symbol of the second-wave of feminism. As David and his classmates start to come to life, they turn "colored"; town authorities, threatened by their otherness, start to crack down with a series of laws that resemble Jim Crow. Ross has been clear about his political intent. After a decade or so of hearing politicians like Ronald Reagan, George H.W. Bush and Bob Dole (“I want to build a bridge to the past”) clamor about a return to the prosperity of the 1950s, buttressed by a film industry that seemed set on supporting that fantasy (films like “Back to the Future,” “Diner,” “Stand By Me” and “Peggy Sue Got Married” made Hollywood seem like a ‘50s nostalgia factory), Ross felt compelled to remind audiences of the real social dynamics at play during this so-called better era, in which conformity quashed individuality—and prejudice and fear consumed our democracy. The 1950s were a simpler time, he points out, as long as you were white and male.

David is still idealistic at the end of “Pleasantville,” but it’s an earned idealism, and such characters populate Ross’ next three films. “Seabiscuit” was an unabashed love letter to American resilience at a time when the country needed it most. The film, which was nominated for seven Oscars including Best Picture, came along less than two years after 9/11, and its Depression-era tale of damaged Americans—including a disabled jockey, a failed businessman and the injured horse itself—resonated with a nation recovering from its own national trauma. It’s not one of Ross’ most nuanced works; “Seabiscuit” lacks a self-critical apparatus to elevate it beyond its propagandistic tendencies, but much like George W. Bush in the days after 9/11, it was the film we needed at the time.

But even through its rose-tinted nationalism, "Seabiscuit" celebrates a strain of idealism borne out of hardship and loss. The horse’s owner, played by Jeff Bridges, is the best model of this thinking. Riffing on his role in 1988’s “Tucker: The Man and His Dream,” Bridges plays the happy-go-lucky bicycle repairman who gets rich when he starts selling automobiles (he describes them as “the future”). But his life comes crashing down with the market; he loses everything, including his wife, who leaves him after the money goes away. The positivity with which he shepherds Seabiscuit—and, the film argues, an adoring nation—to success is inborn, but it’s also a product of his loss. He refuses to let Seabiscuit retire or be euthanized after an injury because he just can’t stand to see another defeat.

Nine years later, Ross returned with his most successful film yet, the mega-blockbuster adaptation of “The Hunger Games.” Although he was hardly a household name, it’s easy to see why producers trusted Ross with the first installment of what they hoped would be a franchise that would make lots of people rich. Ross had demonstrated an ability to turn political material into a mainstream hit, and “The Hunger Games” would be one of the most political blockbusters ever made. Its dystopian story of class revolt tapped into the spirit of both Occupy Wall Street and the Tea Party, and while pundits from both sides tried to claim the film’s politics as their own, its enormous commercial success clearly showed that it transcended party lines.

Again, idealism is the subject at hand. Katniss Everdeen is a most reluctant hero, who becomes an unwitting symbol of an uprising. People follow her, but she’s not sure she deserves it. The subsequent films in the franchise directed by Francis Lawrence delve more deeply into the way symbols are used and abused by those in power, but Ross deftly set the stage by defining the oppressing world of the Capitol in broad but efficient strokes and refusing to cave in to the film’s more sensationalistic elements. In explaining his refusal to rely too heavily on special effects and (particularly) 3D, Ross said that to do so would be “exploiting what the book condemns: a media-centric society where entertainment in that culture devolves into spectacle, and that spectacle evolves into political control.” 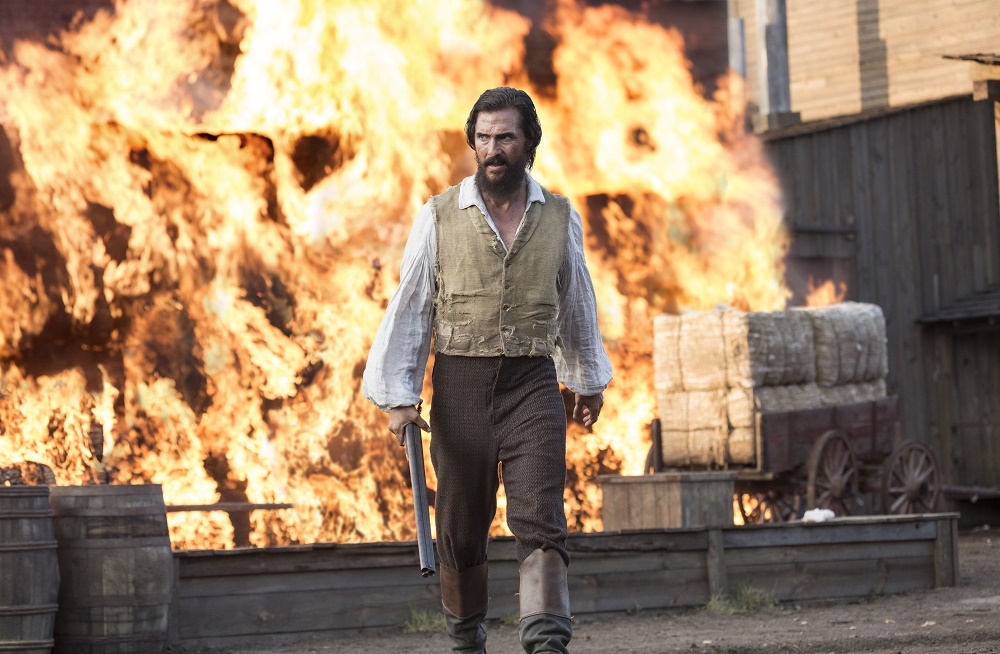 Ross’s latest, “Free State of Jones,” is by most accounts his first significant misstep. It’s one of those labors of love that a director works on for a decade and, after a big hit, gets the capital to make a reality. It’s a film that, if the weekend grosses are any indication, someone probably should have stopped. In addition to its general narrative failures, its racial and gender politics are woefully outdated, relying on a politically incorrect “white savior” archetype and relegating its women—without any agency of their own—to the jobs of wife and mother.

And yet it touches our political moment in eerily specific ways for a story that was ten years in the making. Its tale of a deserter from the Confederate Army who starts his own army, and eventually “free state,” may have been pitched as a racial story, but what drives Newton Knight (Matthew McConaughey) and his merry band of outsiders together is economics. Many poor white Southerners join his cause because of unfair taxation laws, income inequality and disillusionment over the war; when white savior Knight tells an escaped slave that he left the Confederacy because he didn’t want to die over cotton, the slave laughs and replies, “Me, too.”

Knight starts off as a cynic; as he helps his followers shed their racial divisions in pursuit of an economic utopia, he becomes an idealist. In this way, “Free State of Jones” captures our anti-establishment moment in which the old rules no longer apply. In 2016, voters on both the right and left are threatening to refuse their party’s nominee. Some Republicans are even planning to vote for Hillary, their once-hated rival, while disillusioned Sanders supporters are looking into the Libertarian Party and Gary Johnson. This is the brand-new world that “Free State of Jones” reflects, and it demonstrates once again the virtues of that director who can speak the language of politics to a truly bipartisan audience. Ross has his finger on the pulse of our democracy, and even if the box-offices grosses are not always kind, perhaps history will be.