There are dozens of alien languages spoken by at least as many different life forms in "Star Wars: A New Hope", but when you remove English, the language spoken by its main characters, something sweet happens: The film's images and sounds, which are as familiar to many of us as a close relative, become almost new. Dubbed in Navajo (with English subtitles), it's as if "Star Wars" has dyed its hair a color that makes its eyes pop and its teeth gleam anew.

This version produced by the Navajo Native Museum made a stop Sunday night in New York City at the Smithsonian's National Museum of the American Indian as part of an eleven-venue tour this fall. (Most of the other screenings have been in Arizona, Oklahoma and Kansas.)

Ellyn Stern Epcar* oversaw roughly 70 voice actors representing five distinct Navajo dialects enacting the story of rebel fighters at war with an evil galactic empire. All the resonances you might imagine emerge from this take. When Luke Skywalker discovers the charred remains of his family, massacred by Imperial Stormtroopers, the scorched earth policy of 19th Century American Indian fighters comes to mind. When Obi-Wan Kenobi tutors Luke on the ways of the Force, it evokes the generic Native American mysticism we know from pop culture (even though actual Navajo religious beliefs are a lot more varied and complicated than "Stretch out with your feelings."). The Imperial Commanders seem to speak in a harsher dialect with relatively gruff voices. In their crisp, dark uniforms, they push the Nazi metaphors that were always there to the limit. The Storm Troopers retain their thankless cannon fodder status, sounding like put-upon grunts whose fate in the eventual Death Star explosion is still worrisome. 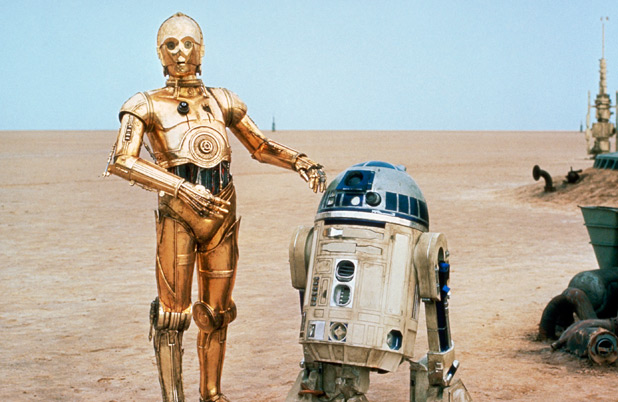 The nicest surprise is how C-3PO, voiced this time by a woman, becomes a soulful and complex bundle of tensions and contradictions. 3PO respectfully gathers the bodies of slaughtered Jawa for burning in one scene (the first such solemn burial in the series), but later hisses, "I can't abide those Jawas. Disgusting creatures!" when encountering a living one. C-3PO's anger, self-pity and self-loathing come through as tragicomedy in this vocal performance. He (she?) transfers the Jim Crow discrimination he routinely faces (most famously at the Mos Eisley Cantina) to his fellow droids and to anyone at or beneath his station. Miraculously, we still love him because, underneath all of his cowardice and political maneuvering, he is a mindful and lonely soul: His fretting over wounded R2D2 at the end of the movie, wherein he offers to donate any of his own parts necessary to restore his companion, is heartbreaking in plaintive, feminine Navajo.

Yes, this is "Star Wars" I'm talking about. No, I'm not smoking anything.

Navajo Princess Leia is sweeter and prissier than Carrie Fisher. She seems more the precocious teenager Fisher was at the time, which makes the putdowns she lobs at 30-something Harrison Ford that much funnier. Both Han Solo and Luke Skywalker sound tougher than their American incarnations. Luke's famous whine is gone, making it easier to see the seriousness that long underappreciated Mark Hamill brought to his character's angst and arc. 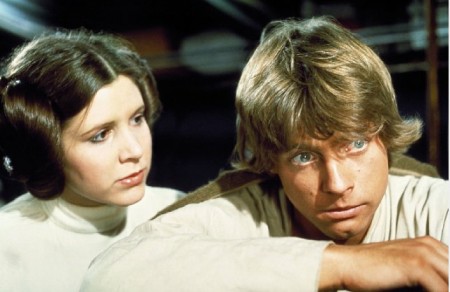 To experience "Star Wars" in an unfamiliar but beautiful language is to appreciate how much care and ingenuity went into its design. To see it with English subtitles is to appreciate the one aspect its creator has never been celebrated for, the dialogue. Watching this presentation 36 years after the film's initial release puts the cornball one-liners, space jargon, florid villain-speak and screwball Han-Leia squabbles in the Old Hollywood context Lucas always intended.

The only element that mars this sensation of reading a timeless ancient text is the computer graphic "improvements" Lucas added to the film in 1997. The creatures, vehicles and architecture pasted onto Lucas' Kurosawa-inspired formal compositions were meant to broaden the film's scope in ways not possible in the late 1970s. They're like putting spinning gold rims on a classic Duesenberg roadster.

If anything, the new Navajo dialogue almost makes the CGI alright, bringing out what I read as the most personal and touching aspect of Lucas's original vision. He was trying to create teeming worlds in a galaxy exploding with diverse cultures and languages. This was the curiosity of a white boy from Modesto, California, where, if "American Graffiti" is to be believed, the most exotic personage he might have encountered growing up was the voice of faux "negro" Wolfman Jack on the radio. Adding bigger, louder, more outlandish and energetic characters to the "Star Wars" melting pot years later was a way of indulging that curiosity to an extreme. It didn't work, but the symphonic range of Navajo voices Wheeler has brought to "Star Wars", laid against the sonic poetry of composer John Williams and sound designer Ben Burtt (especially in the always-gripping, cathartic Death Star assault) reminds us that the intention was grand and lovely. It was nice of Lucasfilm to let Wheeler and company produce this gift to the Navajo Nation and anyone curious about Native American culture. But I can't wait until some YouTube joker adds this inspired soundtrack to the stately, corny CGI-free original.

*Originally this essay incorrectly credited Manuelito Wheeler as the ADR director of the dubbed version. He was the person behind the idea, and produced this version, but Ellyn Stern Epcar cast and directed the Navajo voice talent.