Author's note: This month’s short film, Don Hertzfeldt's “World of Tomorrow," is currently available worldwide on Vimeo for $3.99 as a 30-day rental.

Most short films have no hope of making any money. They are usually small passion projects meant to travel the world’s film festivals before they end up on the filmmaker’s website, via a YouTube link or another streaming service. Only precious few move on to the status of an On Demand movie that one has to order on Vimeo or iTunes (and, of course, there are the elite 15 films that go on to be nominated for Academy Awards). A short film has to enjoy monumental success on the film festival circuit before it can be counted on as a money maker for one of those services to list it with a price tag. Yes, it is possible that short films can make money, or at the very least, help make some money back for the filmmaker, who is likely in the red.

This month’s short film, Don Hertzfeldt’s 16-minute animated masterpiece “World of Tomorrow,” exists online, but will cost $3.99 to order (as a 30-day rental). I normally avoid featuring such titles. Part of the appeal of this column is being able to offer a film for free, along with the review and the Q&A with the director. But “World of Tomorrow” is special enough that it warrants a column devoted to it; I certainly wouldn’t showcase it here if I didn’t feel it would be worth your money. Along with its 30-day-rental availability, the film certainly demands repeated viewings. Of all the short films I’ve seen this year (roughly 150 of them), this is my absolute favorite.

Hertzfeldt’s “World of Tomorrow” shares the same animation aesthetic as his 62-minute film “It’s Such A Beautiful Day,” which consisted of three of his shorts, all concerning the same characters. The beings of "World of Tomorrow" look like stick figures any kindergartner could draw, but the lovely, minimalist landscapes they inhabit are a feast for the eyes. The title suggests a futuristic travelogue of sorts and that is precisely what Hertzfeldt delivers, all through the eyes of Emily Prime (voiced by Winona Mae), an adorable four-year old who accidentally turns on a communication device that puts her in touch with an adult third-generation clone of herself who exists 227 years in the future. The Emily clone (voiced by Julia Pott) uses time travel to bring Emily Prime into this future. “You’ve heard of the internet,” says adult Emily. “Welcome to the outer-net.”

From there, Hertzfeldt treats the audience to a series of brilliant absurdist set pieces involving a museum display of an aging human being, discount time travel for the less affluent members of society who want to avoid “dying horribly,” robots on the moon and the transference of precious memories. Like “It’s Such A Beautiful Day” and Hertzfeldt's other work has demonstrated, within the absurdity lurks a sense of longing for a connection, a soulsick-ness. The adult Emily recounts her days falling in love with unintelligible monsters and inanimate objects while working alone on the moon, training robots to be afraid of the dark.

This may sound like a lot to take in, and perhaps on first viewing it is, but “World of Tomorrow” is so funny and endlessly inventive that it hardly matters if it takes a couple viewings to catch and digest all of its ideas. Hertzfeldt has created a rich tapestry of concepts that are both heartbreaking and hilarious, while using the simplest animation tools to create a universe that looks unlike anything else out there. But the true masterstroke of this is the casting of his four-year-old niece Winona, whose voicing of Emily is so wonderful and charming, one almost wishes she could have her own feature. Julia Pott’s delivery as adult Emily has the right tone as she tries to maintain an authoritative presence while also trying to decipher Emily Prime’s brand of gibberish.

I have seen “World of Tomorrow” more times than any other short film in the past few years. It gets richer and funnier with every viewing. While it is a futuristic piece, it has a potent message about appreciating the present. "World of Tomorrow" reminds me of why I love doing this column, and why there has never been a more exciting time for daring artists who express themselves through short films. As Emily says, “Now is the envy of all of the dead.” 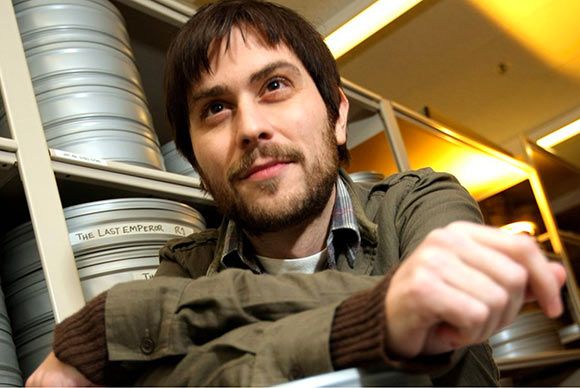 Let's talk about the voice work.  How did you go about creating Emily? Is everything she says scripted?

Everything adult Emily says was scripted, and everything little Emily says was not. She was voiced by my niece, who was only four when I recorded her. I realized really quickly that there was no way I was going to get her to say any of the lines I'd naively hoped her to say. So instead of trying to coach her, I threw out my lines and quietly recorded her over a few days as we drew pictures and played with toys and stuff. I created her character out of her natural reactions. Then I rewrote the story to make everything fit, mainly lots of dialogue, and brought in Julia to record her lines and the other half of the conversations. It was tricky, but really fun to puzzle out. My niece lives in Scotland, so it wasn't an easy option to just go get additional material from her. It was this or nothing, I had to figure out some way to use whatever was coming out of her mouth. As a writer, I actually felt a lot of the pressure lifted because now I had this weird little collaborator. It was kind of like working with an improvisational actress who was half-crazy, and then disappeared.

The film has a comedic tone that recalls Douglas Adams' work. Would you consider him an influence?  What other influences might there be?

Someone else said that too, and I'm embarrassed to say I'm not really familiar with his work. I have a vague memory of reading part of one of those “Hitchhiker” books in the 7th grade but I must have given it up and went back to Stephen King or something. The influences for "World of Tomorrow" were a bit scattered. I'd wanted to make a science fiction film for a long time, so I had a backlog of spare ideas floating around, some of them over ten years old. A few other pieces of the story came directly from a graphic novel I wrote in 2013, which itself was probably heavily, overly influenced by Edward Gorey, though I'm not sure if that really reflects in the movie. Other moments can come from things as simple as hearing a song lyric. My writing is usually a mess of unrelated stuff ... things drift by, get scribbled on Post-it notes, and I eventually gather them together and try to make sense of it. Overall, I've always been a big fan of pulpy science fiction, the optimistic yet somehow terrifying science fiction of the 40's and 50's, where logic took a back seat to some really giant, weird ideas. Some sort of abstract, horrible space doom was always right around the corner, you could disintegrate into a black hole, go mad inside a computer for eternity, or get accidentally marooned thousands of years into the past, yet it was all in the plucky spirit of progress somehow. There's not a lot of sprawling, weird-idea driven science fiction around right now. It's mostly trended towards realism, like having to rescue Matt Damon from Mars. I remember when I first saw "A.I.", the moment it suddenly said, "2000 years later," I thought, "Yes! Yes, show me that!" and I realized how desperate I was for seeing those big risky weird ideas again. Because even if they fail, at least they did it really interestingly.

So much of your work encompasses with works of classical composers like Strauss and Wagner. Does music help inspire some of the sequences you produce?

Most of the time, finding the right marriage of music comes after the fact. I animated a thing for "The Simpsons" where I played a Chopin piece on the piano—that's the only music I can think of right now that I had in mind before I started drawing. I may be misremembering this, but I'm pretty sure the Richard Strauss waltz in "World of Tomorrow" came in after everything was animated. I probably knew I wanted to use it, but I didn't know where yet, or how frequently. Incidentally, speaking of "A.I.", apparently Stanley Kubrick had intended to use that same Strauss piece for the film, but he never got the chance. So I swiped it instead.

Both "It's Such A Beautiful Day" and "World of Tomorrow" have themes of unrequited love and loneliness.  What brings you back to these themes?

As a writer, it's more interesting when things don't work out. "Happily ever after" is a pretty boring story to tell. Unrequited love and loneliness is also probably far more common and relatable in most people's lives. I wanted Emily's stunted emotional progress to be as clumsy and painful as every adolescent experience. Most of us gravitated towards all the wrong partners and hurt people on accident in those first messy relationships. Emily is just going through the same thing, only with rocks and fuel pumps and strange creatures. When we recorded the line, "He followed me around for seven years saying unintelligible things," Julia said, "Yep, been in that relationship."

With "World of Tomorrow" being more of a science fiction piece, do you see it as a part of a bigger film that we'll eventually see (like how "Beautiful Day" was comprised of three short films)?

I don't know. I don't think so. After I finished the first part of "It's Such A Beautiful Day" in 2006, I think I immediately knew I wanted to continue that story, practically right where I'd left off. Those three parts flow together pretty seamlessly now as one solid thing. "World of Tomorrow" feels different, more disjointed. That story feels finished, though maybe Emily doesn't. It might be more interesting as a series of individual shorts with their own themes and places in time. Maybe you don't even need to watch them in order. I have a new set of recordings of my niece at age five and she already sounds different, and she recently turned six. I'm not sure if we all want to sign up for doing "Boyhood" in space, revisiting her across time in pieces here and there over the years ... but it's interesting. Who knows. But putting it in a feature-length container with some sort of overarching narrative feels less free right now.

How do you like the Vimeo-On-Demand platform for your film?  Will it be made available anywhere else?

"World of Tomorrow" is still in theaters. I think it's soon opening in more of them, and it's later appearing on a limited-run Blu-ray we're releasing. Vimeo's been a really great match, and it'll be staying up there for the foreseeable future too. I'd love to also bring it to a platform like Netflix. "It's Such a Beautiful Day" has found a huge new audience there, but they don't seem very interested in shorts.

I’m ready to get moving on two new films but I need to get the Blu-ray out of the way first. Film restoration is one of the most boring things I ever find myself doing ... everything is looking really beautiful, the Blu-ray will be great, etc, etc. But I'm really looking forward to animating again.

WORLD OF TOMORROW from don hertzfeldt on Vimeo.