One of my favorite moments when programming short films for the just-completed Chicago Critics Film Festival is finding that one short film that makes the cut within just a few minutes of watching it. The Swedish documentary “Ten Meter Tower (Hopptornet)” has such a simple and compelling idea that it’s hard to imagine a programmer not wanting to watch it with a big audience. When the film played at the Music Box this past May, I sat in the back row and listened to the audience gasp, laugh and recognize their own anxieties when it comes to taking a literal giant leap.

Axel Danielsen and Maximilien van Aertryck’s film is quite simple: A camera focuses on a high-dive in an indoor swimming pool. We can tell by watching the people who are about to jump that it sits at a great height. The average person stands, takes a few deep breaths, walks up to the edge and just as they are about to jump, they get cold feet and walk to the back and re-think whether or not they have the guts to do it. We have all had that moment, often when we’re younger and getting on a diving board for the first time, looking down and having a gut-check moment. “Ten Meter Tower (Hopptornet)” depicts all sorts of men, women and children attempting to make that leap.

Danielsen and van Aertryck wait at just the right time to cut to a split-screen shot of the diver and the pool itself. The high-dive is clearly mic’ed so we can hear every gasp and every conversation between two potential jumpers playing rock-paper-scissors as to who will go first. The film occasionally goes silent as it depicts a slow motion shot of jumpers in mid-air. Perhaps it is not the landing that frightens people, but the free-fall itself and the length of it.

What I often heard from people who see the film is how surprising it is to see so many women and young girls making the jump with little hesitation while the more ultra-masculine males have a hard time working up the nerve. There is certainly a psychological experiment to made from that, but gender examination is not the film’s sole intent. This is a wonderfully executed and funny look at our fears and what makes us all finally take a deep breath and make the jump. 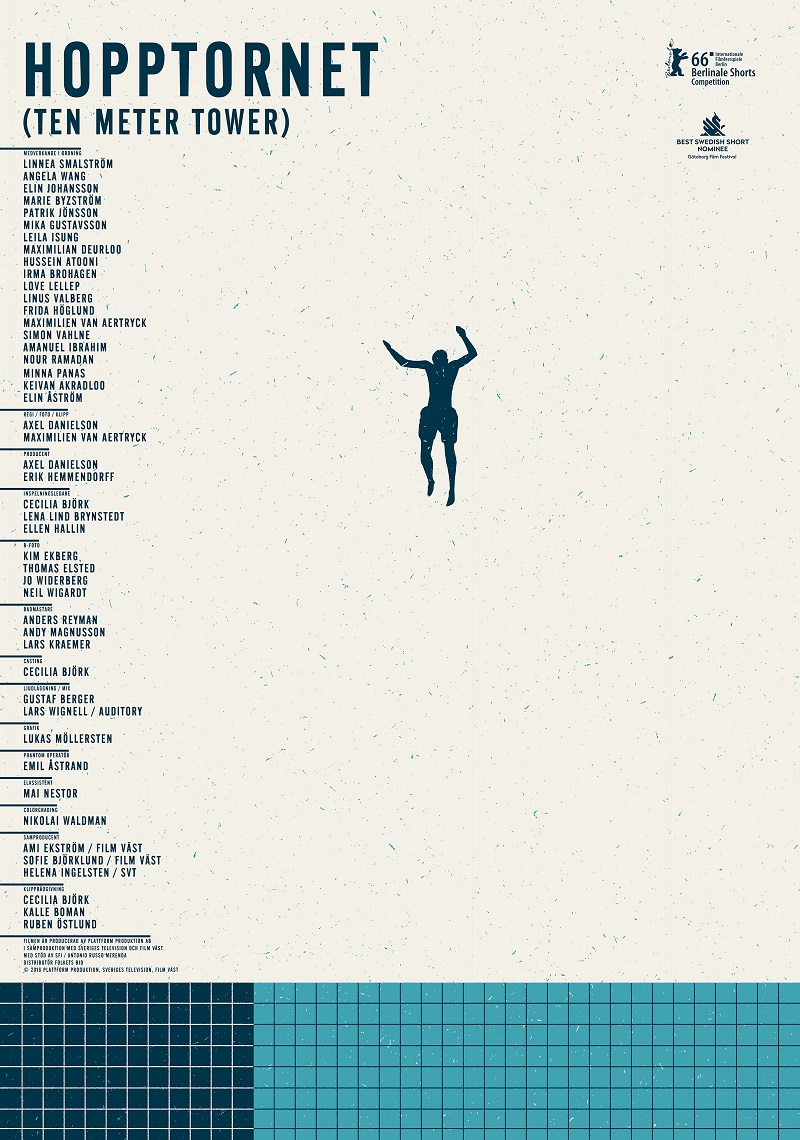 This is one of those perfectly simple ideas for a short film. Where did the idea come from?

We talk about our films as studies, rather than films. Our challenge and desire when working on “Ten Meter Tower” has been to capture precise images of people in a vulnerable state, a situation strong enough that it could work without a classical story frame. The drama had to be within the image, so we discussed where we would find this setup. The high dive tower seemed to be the perfect place for this kind of study. The questions we had was: can doubt inside the mind connect to the image and the audience? What does decision making look like? Artistically: How can we use long takes and single shot scenes and no storytelling and still make it entertaining?

We filmed it all with six cameras and several microphones. The shoot was three days but it took two years of idea work and planning.

At Plattform Produktion we have these two interests in common; to study human behavior and the need to catch moments of life in real time while it’s happening within the frame of the camera.

I’m guessing the subjects were aware of the film being made. How did you recruit them to participate?

Through an online advertisement, we found 67 people who had never been on a 10-meter diving tower before, and had never jumped from that high. It was important for us not to conceal the fact that this was an arranged situation, and thus we chose to show the microphones within the frame.

We cast people through a casting website for the shootings. There were three parts of the contract:

1.  You can never have jumped from 10 meters before.

2.  You must stand up there for two minutes before you make the decision.

3.  We don’t pay for any damages of your body

There were about 40 people in front of camera during shooting. They were all paid “extras-salary” no matter if they jumped or not. We were as interested of those who did not as of those who did.

We cast as broad and diverse as possible, the oldest is 78 (the woman that almost climbs down and then changes her mind) the youngest was 9. We wanted to show that these are human conditions that are the same no matter heritage, age, your sex or color of your skin. These two human behaviors, the instinct of fear and the will of doing it anyway, have shaped us for thousands of years and unite us as species on this planet.

Were you surprised by any of the participants and their willingness or unwillingness to go through with it?

Our objective in making this film was something of a psychology experiment: we sought to capture people facing a difficult situation, to make a portrait of humans in doubt. We’ve all seen actors playing doubt in fiction films, but we have few true images of the feeling in documentaries. Ultimately, about 70 percent of those who climbed did jump. We noticed that the presence of the camera as well as the social pressure (peer pressure from those awaiting their turn beside the pool) pushed some of the participants to jump, which made their behavior even more interesting.

What went into the idea for changing the lighting for the slow-motion scenes?

Like many cases in film history the explanation is far simpler than you would imagine. Due to the nature of high speed shooting you have to have extremely special pulse-light made for high speed shutter rate. The explanation is that we just used all light we could afford on the people on the platform and the spaces with less light seem darker than they actually are.

We knew this from the planning of the film, and knew we would have no problem with the change in forms, because the slow-motion images by nature are superficial and will function as contrast to the other images.

You work as co-directors. How do you two divvy up the directing duties?

We actually divvy directing, production, cinematography, editing and everything around the films. Our partnership is founded in a common point of view on the world and what is lacking, both in society and in the film industry. (The decisions emerge from almost a dialectical method with thesis and antithesis and become synthesis.)

In the autumn of 2015 we began a collaboration with The National Evening News in Stockholm. With the help of the networks technicians we found a way to record—live—the studio cameras while the evening news were being presented. With this footage, showing news anchors shifting into and out of their roles, we made a short film called "Because the World Never Stops" which had its premiere at the Toronto Film Festival in 2016.

We are also producing two documentary projects for other directors. One taking place in a refugee camp in Iraqi Kurdistan where children use cameras to visualize their experiences from the war. The other is an unsentimental film about the largest political media event of the year in Sweden: The Almedalen Week. Both presented as works in progress at this year’s SIFF (Seattle International Film Festival).