What if everyone you owed money to suddenly appeared in person as you strolled through Central Park? That’s what happens to Norman (Kieran Culkin), a young New Yorker who just wants to stop arguing with his girlfriend, Claire (Mae Whitman) about their relationship. As they argue, one by one, someone comes out of the woodwork and approaches Norman about the money he owes. Claire gets so frustrated with Norman’s behavior, she leaves him at the park to fend for himself. Eventually, because two of the people approaching him are Norman’s shrinks, the situation becomes an impromptu therapy session that Norman must deal with on his own.

Chicagoan Noah Pritzker wrote and directed the ten-minute short “Approaching A Breakthrough” and Woody Allen’s influence becomes apparent from just the first ten seconds: The jazz piano intro, the young couple bickering through Central Park, the shrinks playing such a vital role in the narrative. Even an appearance of someone from Norman’s past becomes a significant part of the storyline. Many of the tropes are there, but Pritzker manages to make them seem more fresh than Allen would be able to do today. It helps that Pritzker is around the same age as his actors and can write his dialogue in a way to make it palpable for people in their age group (Allen’s dialogue written for people 50 years younger than him often has cringe-worthy results).

While some might find this kind of material a bit off-putting in the same way people just don’t care for Allen’s work, Pritzker’s slow reveal of the debt collectors has a charm about it that makes it a fun little gimmick for a comedy. One wonders how Allen himself never thought of it. Culkin is a nice choice to play Norman and Whitman has been coming into her own as a solid romantic lead (see also: “Operator”). They are a believable couple, although by the end, one wonders what they are like when they are not arguing. Another short for another day, perhaps. 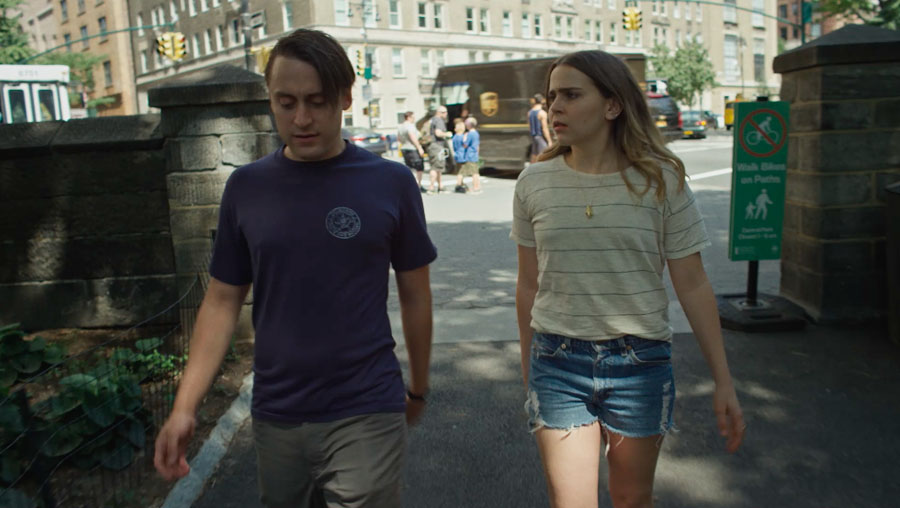 I’m sure you’ve been asked this a lot, so I’ll just lead with it and get it out of the way: Are you a Woody Allen fan?

Yes, of course. As a kid I was always drawn to the Jewish humorists and writers like George Kaufman and S. J. Perelman and Lenny Bruce and Mel Brooks and Woody Allen. When I wrote this short, I was living in LA and missing New York, and wanted to make something in the spirit of my favorite New York movies, many of which are Woody Allen films. His short "Oedipus Wrecks" definitely had a big influence on Approaching A Breakthrough.

How did Culkin and Whitman get involved?

I met Kieran on my first feature, "Quitters," and we stayed in touch afterwards. I had the idea for this short and sent him the script and thankfully he was game to play Norman, and went so far as reaching out to Mae to ask if she'd play his girlfriend in the movie. He knew she'd make a good on-screen argument-partner and I think he was right. I'd always loved Mae as an actor and was thrilled to get to work with her. They're both incredibly smart and generous, as was the rest of the cast.

Is there a kind of “true story” that inspired this?

I moved away from New York with some loose ends I probably would've tried to tie up had I known I'd move back a year and half later. It felt a bit like lighting your house on fire before hitting the road only to realize your car keys were still inside the house.

What were the challenges of filming an indie short during the day in Central Park?

The upside is that it's free and it's Central Park. The downside is that it was comically hot and muggy and loud. We had helicopters circling Trump Tower, some marimbas and bongos being played by groups of children, and then it started raining so we had to move everything and everyone into a tunnel nearby.

I am in the early stages of casting a new feature that will hopefully go in early 2018.

Approaching a Breakthrough from Noah Pritzker on Vimeo.