Ordinary F**king People: Modes Of Verisimilitude in “Boyhood” and Richard Linklater’s “Before” Movies

Once the shock and awe of the production story of Richard Linklater’s lovely film “Boyhood” started to wane, grumblings in the multimedia critical universe began to rise to a particular surface; why go so ga-ga over a movie that chronicled twelve years of a set of characters’ lives over the course of an actual twelve-year production since, after all, documentary filmmakers including Michael Apted told the life stories of a group of growing kids over intervals of seven years in the “Seven Up” films, Truffaut had made a series of films, chronologically, telling the tale of young Antoine Doinel as he morphs from a pre-adolescent rebel to a relatively contented but neurotic Parisian bourgeois, and so on. Of course, the substantial differences between these films seems pretty obvious on not even inordinately close examination…and, more importantly, I don’t intend to file a complaint about things other people are saying about “Boyhood.” I’m just starting off with the analogies coming from ostensible skeptics because I think there’s something unique in writer/director Linklater’s approach to verisimilitude, and it’s particularly interesting in contrast with other films with which “Boyhood” shares a kinship. 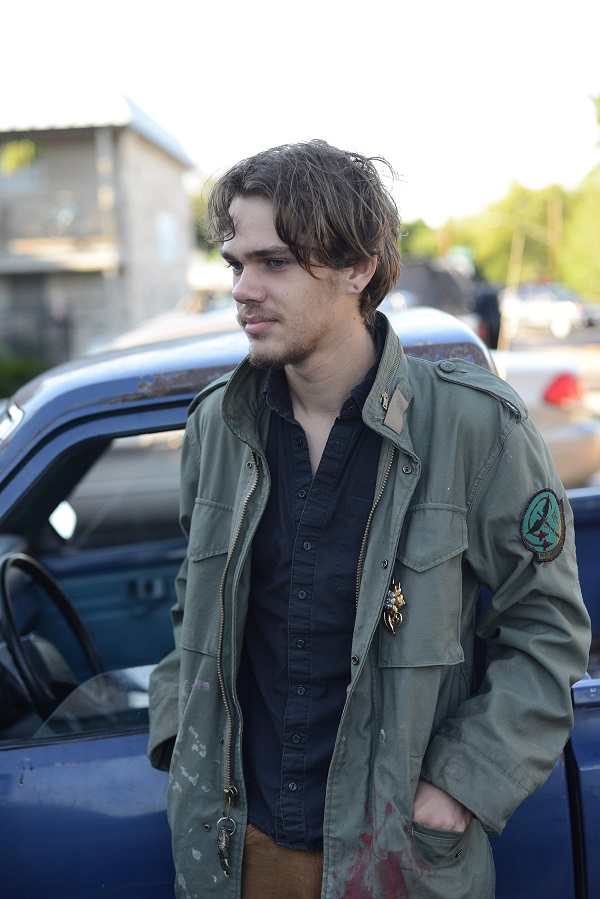 The movie is such a strong, intimate account of multiple aspects of the life and times of its protagonist, Mason, who’s played by Ellar Coltrane with an exemplary mix of commitment and unaffectedness, that it’s easy not only to see the movie as exclusively his story but to believe that “Boyhood” partakes entirely of his point of view. Despite the fact that he worked in the phantasmagoric modes of rotoscoped animation in his films “Waking Life” and “A Scanner Darkly,” Richard Linklater isn’t often cited for his acute visuals. But there’s a fluidity to perspective in “Boyhood” that finds the filmmaker astutely using rhyming shots. For instance, there’s the very first shot of the movie, that of a blue sky, over which the minimal opening titles are seen, after which the audience gets more than a few seconds to drink in the sight of the clouds and the visible atmosphere of our world. After which the movie cuts to a shot of six-year-old Mason, lying on the grass and looking up at said sky. Near the very end of the movie, Linklater’s camera actually descends from the sky, to follow now eighteen-year-old Mason’s dingy Toyota pickup truck (from which he’s removed all but two of the letters of the manufacturer’s name from the hatchback, leaving only the greeting “YO”) as he drives to his last destination in the movie, the unnamed, far-from-home college he’s starting. The movie’s characters articulate philosophical ideas in often clumsy ways, which is an entirely deliberate aspect of Linklater’s simulated verisimilitude. But Linklater’s camera is largely eloquent in its almost pantheistic generosity throughout.

Linklater’s not bound by “rules,” even as he goes about creating a seamlessness in his freedom. Early on, in the sequence where the viewer meets Mason’s father, Mason Sr., a somewhat feckless and callow young away-from-home dad (Ethan Hawke), Patricia Arquette’s mom takes Mason Sr. outside after the kids (Mason’s lively older sister is played by Lorelei Linklater, the filmmaker’s daughter) have spent a day of fun with him. She’s going to dress him down for a number of things. The viewers see their confrontation through the same window the kids do; they don’t hear the dialogue, although at the end of the exchange when Hawke’s character pulls out an envelope and presents it to Arquette we have one idea of what the fracas has been about. Oh, so we’re going to see everything through the eyes of the kids? Not entirely. Just moments before this sequence there’s a much quicker shot, easy to miss, of Lorelei Linklater’s ebullient Samantha running up to just-walked-in-the-door Mom and showing off the bracelets Dad got her on their day out. And the shot is from the dead-on point of view of the mother character. Instances such as this are, in fact, threaded throughout the film, and they are emblems of Linklater’s humanist generosity. 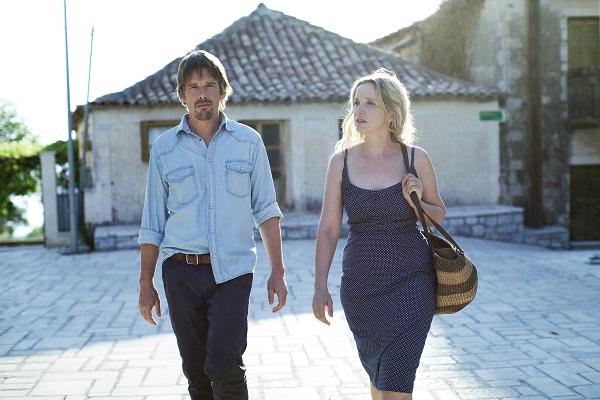 That quality is also on display in a scene later in the film, after Mason’s dad, first seen as a wannabe musician and a minor ne’er do well, has straightened out, remarried, and become a father again. Mason spends his fifteenth birthday in the company of Mason Sr.’s new in-laws, older, church-going country folk who gift Mason with an engraved Bible and a 12-gauge-shotgun. The initial awkwardness of the scene sure does get big laughs in a New York theater, but that’s not the fault of Linklater’s presentation of the characters or what they do, which is plain and straightforward. And in fact Linklater raises here, without protesting too much, by subsequently showing the kindly father in law, and Mason Sr., teaching Mason and Samantha how to shoot. Which one can’t help noticing they actually kind of enjoy. A little later on Hawke’s character offers to keep the gun at his place, as Arquette’s character isn’t likely to want it in her house. This seems a character detail, just as Mason Sr. using his kids as Obama canvassers in 2008 seems a function of that character. Linklater’s politics are left-liberal, as anyone who’s seen “Fast Food Nation” can tell you; but just because he makes motion pictures about beings akin to him doesn’t mean that “Boyhood” is ideologically determined as a “liberal” movie. It’s philosophical fulcrum, articulated by a new character at the movie’s end who observes that it’s time that has its way with us, rather than the other way around, works in a different way in Linklater’s much-bruited “Before” films. These are pictures that take place at heightened points in the characters’ lives, points at which they believe particular things about themselves and are forced, within a very short period, to pick their assumptions apart. Despite the fact that Jesse in the “Before” films grows up to be a published novelist, these movies don’t deign to depict him as a great artiste. Similarly, Mason Jr.’s enthusiasm for photography, and his own aspirations with respect to that form, aren’t used to turn him into a post-modern Stephen Dedalus. “Ordinary f**king people! I hate ‘em!” Harry Dean Stanton barks in one of the most memorable moments in “Repo Man.” What Linklater’s films suggest is that, actually, there’s nothing inherently wrong in becoming an ordinary person, especially if you can find your way to being a decent one.