Mapping my Childhood Through Monster Movies

It was the life-changing moment that sent me on the path to being a cineaste or at least a fanboy. There was a party at my Aunt Phyllis' house. I think it was in San Jose, CA, or some other part of bland suburbia that would soon be known as Silicon Valley. My mom and dad were in the dining room with the other grown-ups getting bombed on screwdrivers made from Donald Duck Orange Juice that was probably meant for the kids' breakfasts. I remember a dog, sliding-glass doors, some kind of mood-lighting and actual shag carpeting.

It was getting dark outside, so the kids couldn't play in the backyard anymore. As we filed into the living room and gathered around a wooden, console TV-set that probably weighed a ton, one of my cousins asked if I'd ever watched "Creature Features."

I hadn't, but whatever "Creature Features" was, it sounded awesome.

My cousins manually turned their TV to KTVU Channel 2 of Oakland, and "Creature Features" began with an intro of cobbled-together film clips of werewolves, vampires, aliens and Vincent Price. All of this was set to a piece of dirty funk filled with wah-wah pedal bass as a demented vocalist screamed variations on the show's title while taking the time to introduce our host, Bob Wilkins. Wilkins, for his part, eschewed the Dracula drag that was de rigueur for horror hosts in other parts of the country. Instead, he looked like a kind of proto-hipster with his horn-rimmed glasses, side swept bangs and outsized cigar. Enthralling his audience by telling them to turn the channel, Wilkins lent an air of authority to a film library that desperately needed it.

So for the next two hours I sat transfixed as Wilkins curated the spectacle of a mammoth, upright squid laying waste to grass huts while scooping villagers into its maw in the Japanese less-than-classic "Yog: Monster from Space" (1970).  As if the squid already wasn't enough, the film closed with an epic clash between a crazy-looking giant crab and an equally enlarged turtle as a volcano spewed lava onto a Pacific atoll. This thing called "Creature Features" definitely lived up to its name.For most of my life, I could never affix a date to these hazy childhood memories of my first encounter with this local monster movie show, but now I can. For their book, "Shock It to Me: Golden Ghouls of the Golden Gate" (UHF Nocturne, 2011), co-authors Mike Monahan and Lon Huber combed through old "TV Guides" and newspaper TV listings kept on microfiche at public libraries, and compiled the airdates of every monster movie show that ran in the San Francisco Bay Area from the late 1950s up to 2011. Where Facebook plots our lives from the moment we first log in whether we want it to or not, with "Shock It to Me," I can now construct a kind of crude timeline of my childhood through my memories of watching monster movies on TV, the all-pervasive electronic medium of the time.

On page 76 in the extensive chapter on Wilkins' 1971-79 run on "Creature Features," I find that "Yog: Monster from Space" aired on Saturday, September 20, 1976. I was six years old, and was maybe two weeks into the first grade, which explains the last throes of summer feel that the party at my aunt's house exuded. "Yog" didn't run on "Creature Features" again until January 21, 1978, a date by which I'd already racked up a troubling number of hours watching monster movies on local television. With the release of "Star Wars" in May 1977 only deepening my obsession with science fiction, there was no way that I was seeing "Creature Features" for the first time at that point.

Out of the theta-wave induced dream state that is childhood, my next clear memory of having seen "Creature Features" comes almost two months later on November 8, 1976 with a showing of "Lost in Space" producer Irwin Allen's junky remake of "The Lost World" (1960). Where I find the movie's reptilian cockfights between crocodiles and monitor lizards with fins glued to their backs to be pretty revolting now, I thought "The Lost World" totally delivered the goods at a time when I judged the quality of a film only by the number of monsters it had in it. By this standard, "Valley of Gwangi" (1969), a lesser Ray Harryhausen effort with dinosaurs attacking cowboys, was a far better film than "Casablanca" (1942) with its total lack of monsters. 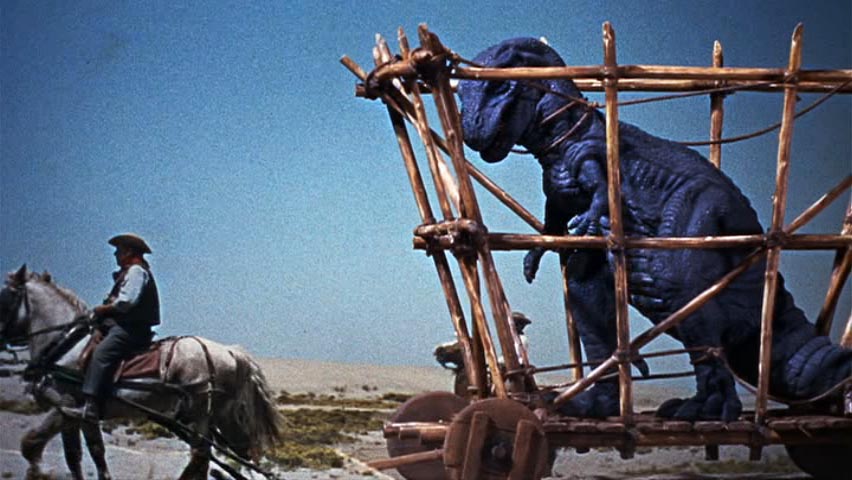 It's a safe bet that I first saw "Frankenstein" (1931) on "Creature Features" on May 15, 1976, but I can't be entirely sure. "Creature Features"' 9:30 p.m. start time still kept the show tucked behind my bedtime when I was six, even on Saturday nights. There's a good chance, that I first encountered Boris Karloff with bolts sticking out of his neck two years earlier on May 4, 1974 on "Monster Matinee," a show that was hosted by a guy in a white gorilla suit dancing to "The Monster Mash." Although Monahan and Huber inform us that the show only ran for five and a half months on KTTV Channel 11 in San Jose, I do remember that white gorilla.

May 12, 1978 was the night that my Grandma Nina and I bonded over a "Creature Features" showing of "The Creeping Terror" (1964), a zero-budget piece of frustration where a moldy piece of discarded carpet menaces South Lake Tahoe. While coming back from a commercial break, Wilkins flashed a hand-drawn title card on the screen that read, "This film is rated P.U." My grandmother nearly fell out of her chair laughing at that. By the end of the show, Wilkins had taken to threatening to quit broadcasting altogether and open a worm farm. Worm farms were kind of the Bitcoin of the '70s.

Despite my steady televised diet of seeing walking corpses drink the blood of the living or toss little girls into ponds, I don't remember being particularly scared by any of this with a couple of exceptions. First, there was any time that Wilkins showed just the trailer for "Night of the Living Dead," which sent me scurrying from the living room for the safer confines of the kitchen. And then there was "The Blob." 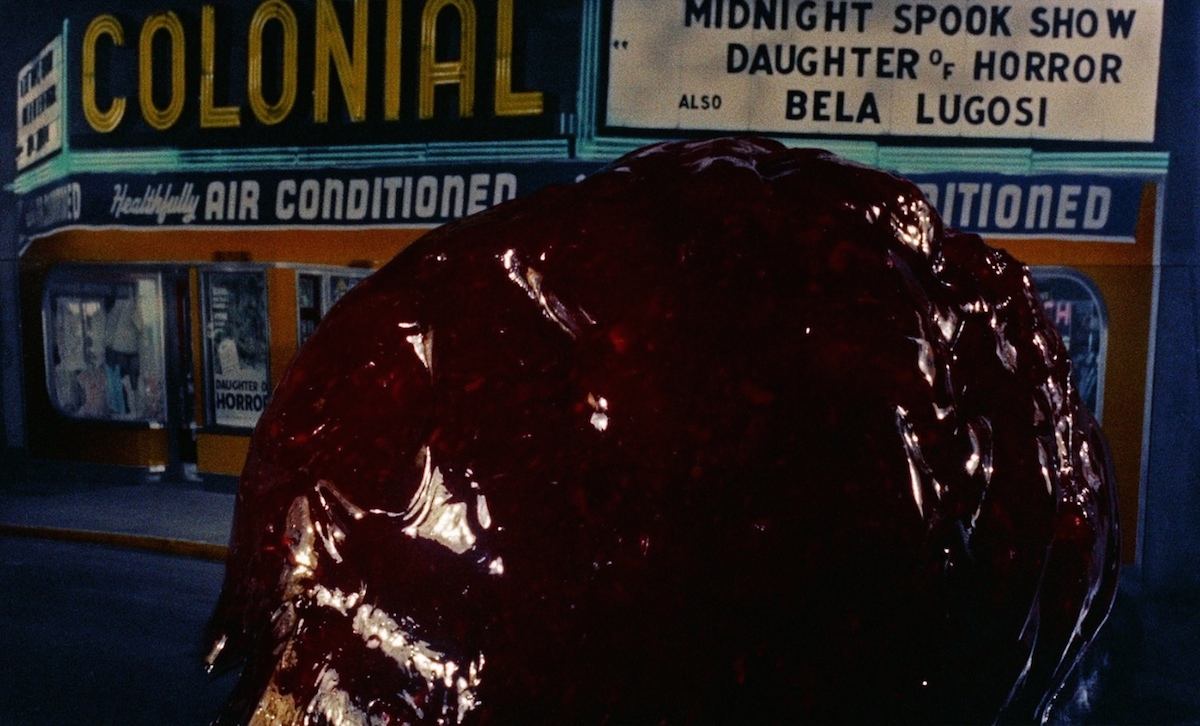 The house was full of boxes because we were in the process of moving. My mother and father had separated, and the house I grew up in was sold as part of the divorce settlement. Adding to an already tense situation, my pet hamster had also chewed its way out of its plastic Habitrail, and was loose in the garage among stacks of even more boxes. I was watching "The Blob" on "Creature Features," and for some reason my mom picked this time to go to the neighbors' house across the street to borrow some masking tape or something, leaving me all alone when I was way too young to be left alone.

She said she'd only be gone for five minutes, but that five minutes stretched into 20, giving the blob plenty of time to devour hobos and small town doctors. Every little creak of the house or sound coming from outside had me jumping out of our ugly tweed couch. I became certain that the gelatinous mass from space had consumed my hamster. It only seemed like a matter of time before it oozed into the house from underneath the backdoor to get me.

My mom returned to find me in tears, but still watching as the blob has Steve McQueen and his girlfriend trapped in an old diner.

"I locked the door," she said, wiping the tears from my eyes.

"But the Blob can crawl in under the door," I said, choking back tears. "It can get in anywhere."

And now I know that this whole partially TV-induced trauma took place on September 11, 1976. Just a year earlier, my mom and dad were together, partying at my dad's sister's house. Somehow, everything had fallen apart in that short time. Marriages were dissolved. Houses were sold. Schools were switched. Lives had turned upside down. While monster movies (and comic books, and monster movie magazines) offered me some escape from so many childhood cataclysms, I also now know that I was always drawn to this stuff even before I was at the center of a family court custody battle.

Flipping through the pages of "Shock It to Me," I see the schedules for "Chiller Diller" on Saturday afternoons on Channel 2 and KBHK Channel 44's "Ghoulie Movie" and "Monstrous Movie"—shows that provided me with a majority of my movie watching as a kid due to their earlier start times. But the book's focus on shows that specialized in horror and science-fiction films leaves out "Movies 'Til Dawn" on KICU Action 36, where I first encountered a print of Kubrick's "Lolita" interrupted by incessant ads for MMM Carpets when I was around the same age as the film's title character. This was an event that blew my young mind as much as seeing "Yog" did, but exactly when did this happen? I might have to sift through that aging microfiche to find out.

AUTHOR'S NOTE: "Shock It to Me" researcher Ron Huber passed away after a battle with cancer on February 3, 2014. In addition to compiling the TV listings for "Shock It to Me," Huber also maintained the UHF Nocturne website, an invaluable resource for late-night movie addicts from Northern California. Huber's work in chronicling local television had value, and he will be missed.