“Lost in Space” is a dim-witted shoot-'em-up based on the old (I hesitate to say “classic”) TV series. It's got cheesy special effects, a muddy visual look, and characters who say obvious things in obvious ways. If it outgrosses the brilliant “Dark City,” the previous sci-fi film from the same studio, then audiences must have lost their will to be entertained.

The TV series was loosely modeled on the novel The Swiss Family Robinson, about a family shipwrecked far from home and using wit and ingenuity to live off the land. I loved that book, and especially its detailed description of how the family made tools, machines, and a home for themselves, and trained the local animals.

The movie doesn't bother with such details. After a space battle that is the predictable curtain-raiser, and a quick explanation of why and how the Robinson family is setting off for a planet called Alpha Prime, the film takes place mostly onboard their saucer-shaped ship, and involves many more space battles, showdowns, struggles, attacks, hyperspace journeys, and exploding planets. In between, the characters plow through creaky dialogue and exhausted relationship problems.

Imagine the film that could be made about a family marooned on a distant planet, using what they could salvage from their ship or forage from the environment. That screenplay would take originality, intelligence and thought.

“Lost in Space” is one of those typing-speed jobs where the screenwriter is like a stenographer, rewriting what he's seen at the movies.

The story: Earth will not survive another two decades. Alpha Prime is the only other habitable planet mankind has discovered. Prof. John Robinson (William Hurt) and his family have been chosen to go there and construct a hypergate, to match the gate at the earth end. Their journey will involve years of suspended animation, but once the other gate is functioning, humans can zip instantaneously to Alpha Prime.

There needs to be a hypergate at both ends, of course, because otherwise there's no telling where a hyperdrive will land you--as the Robinsons soon find out. Also onboard are the professor's wife Maureen (Mimi Rogers), their scientist daughter Judy Robinson (Heather Graham), their younger daughter Penny (Lacey Chabert), and their son Will (Jack Johnson), who is the brains of the outfit. The ship is piloted by ace space cadet Don West (Matt LeBlanc), and includes an intelligent robot who will help with the tasks at the other hand.

Oh, and lurking below deck is the evil Dr. Zachary Smith (Gary Oldman), who wants to sabotage the mission, but is trapped onboard when the ship lifts off. So he awakens the Robinsons, after which the ship is thrown off course and seems doomed to fall into the sun.

Don West has a brainstorm: They'll use the hyperdrive to zap right through the sun! This strategy of course lands them in a galaxy far, far away, with a sky filled with unfamiliar stars. And then the movie ticks off a series of crises, of which I can enumerate a rebellious robot, an exploding planet, mechanical space spiders, a distracting romance, and family issues of trust and authority.

The movie might at least have been more fun to look at if it had been filmed in brighter colors. Director Stephen Hopkins and his cinematographer, Peter Levy, for some reason choose a murky, muted palette. Everything looks like a drab brown suit, or a cheap rotogravure. You want to use some Windex on the screen. And Bruce Broughton's musical score saws away tirelessly with counterfeit excitement. When nothing of interest is happening on the screen, it just makes it worse when the music pretends it cares.

Of the performances, what can be said except that William Hurt, Gary Oldman and Mimi Rogers deserve medals for remaining standing? The kids are standard-issue juveniles with straight teeth and good posture. And there is a monkeylike little alien pet who looks as if he comes from a world where all living beings are clones of Felix the Cat. This is the kind of movie that, if it fell into a black hole, you wouldn't be able to tell the difference. 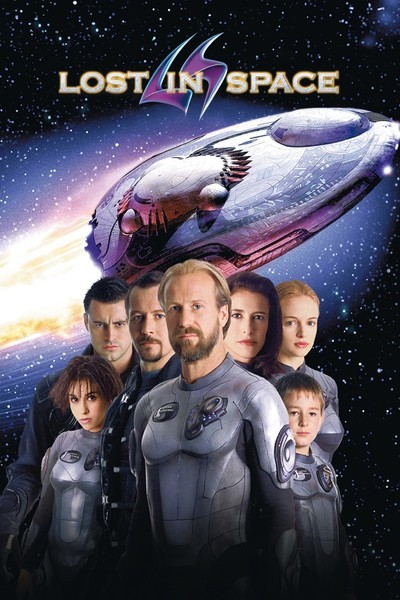 Jack Johnson as Will Robinson