Keeping the Darkness at Bay: Disney’s “Something Wicked This Way Comes”

“Could he say that love was, above all, common cause, shared experience? That was the vital cement wasn’t it? Could he say how he felt their all being here tonight on this wild world running around a big sun which fell through a bigger space falling through yet vaster immensities of space, maybe toward and maybe away from Something? Could he say: we share this billion-mile-a-hour ride. We have common cause against the night.”

I didn’t read Something Wicked this Way Comes for the first time in school, either as an assignment or by prowling the spinner racks of paperbacks at the library. I read it in the fall of 2011, October to be exact. My father had entered a nursing home and would never recover from an illness that he would die from three years later. I was in my first serious relationship and the question of moving in two states away was swirling on the horizon. Big changes were in the air. It crackled with the electricity of the orange of the trees and the death of old selves and dreams. Those faded dreams backed in turn by the danger and promise of new ones. It was the perfect time and mood in which to read the book. I watched the 1983 movie version of it soon after. Jack Clayton’s “Something Wicked This Way Comes” is one of the best and most underrated from Disney’s “dark” early ‘80s period. If the film doesn’t quite plumb the magistral depths of Bradbury’s book it is a heartfelt film, touched by autumn’s chill and aching sweetness of knowing that childhood is coming to an end. 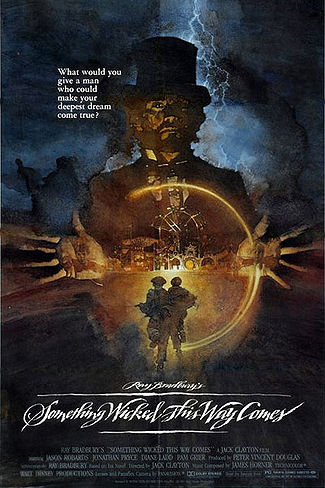 In a small town in Illinois, two boys are entering that age where adolescent friendships are tested by encroaching adulthood. Jim (Shawn Carson) itches to grow up and leave the confines of his small town. Will (Vidal Peterson) wants to hold on to their carefree days a bit longer, a wish no doubt worsened by his relationship with his much older, seemingly distant father (Jason Robards). Robards’ character seems lost in himself as he cleans the town library in the evenings. One night, a train carrying a carnival pulls into town. It’s lead by the mysterious Mr. Dark (Jonathan Pryce) and its attractions offer the carnival goers access to their wildest dreams. And with that, person by person, the darkness the carnival carries begins to seep into the town.

Shot by Stephen H. Burum, the film is a perfect encapsulation of autumn in a small midwestern town. Golden colors of trees and twilight give way to stark black shadows and buildings and carnival tents that look ready to swallow you whole. The picture perfect town here recalls the paintings of Norman Rockwell and advertising illustrations of J.C. Lydecker in it’s apple-cheeked children and shoppers bustling down main street in sweaters and long coats. These images dissolve into the lurid colors and inky blacks of the carnival’s carousel and Mr. Dark’s clothes. Holding it all together is one of James Horner’s best scores. The gentle strings of children at play giving way to the screeching woodwinds of the carnival train arriving in the dead of night. The music takes in the sweep of leaves tumbling to the ground and recalls the unease of passing an abandoned house where you swear you thought you spotted a figure watching you from a window. 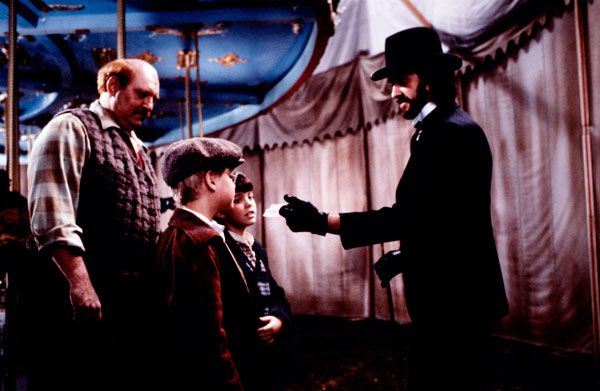 The performances are uniformly excellent. Carson and Peterson are wonderful, believable as boys their ages without falling into mugging and feeling like the automatons that would populate later Disney Channel sitcoms. Robards as Will’s father is wonderful, a man disappointed by life but not broken by it. And, in the end, able to rally a courage forged in love to save his child and the town. And Pryce is great as Mr. Dark, all snaky smiles and faux affability that barely bothers to mask a dark heart. And Pam Grier turns in an eye-catching but sadly silent role as Mr. Dark’s accomplice, a beautiful siren who can appear as an ancient witch one moment and a passenger on a ferris wheel the next, watching the crowd with hungry eyes.

As “Stranger Things” is set to return for its second season, it’s interesting to see how the '80s had nostalgia for earlier decades. Pop culture has always been a curious mix of looking back and treating what came before as a golden age while also looking forward and worrying about what the future holds. In other words, very much like the characters in this film. The boys are eager to grow up, but the cost of growing up too fast is terribly high, giving the story its teeth. The reason we cherish those special seasons in our lives is because they end. It’s awful to grow up, but it’s liberating too. The world becomes less mysterious in some ways, but we pass into the important roles of teachers and guardians. If we remember the lessons we learned, and never completely forsake the imagination, we are capable of keeping the darkness at bay, at least for the night. And we’re more capable of that the more we have each other to count on. And that sentiment is where “Something Wicked This Way Comes” becomes piercingly melancholy. It’s feels like a movie made for a vanished age. But there is no vanquishing evil for good, and there is no extinguishing hope either. We just sometimes need the reminder that we are stronger than the shadows. And, for that, “Something Wicked This Way Comes” feels more necessary than ever.