I only saw Julie Harris once on stage, in "The Gin Game," her last appearance on Broadway in 1997. She did something uncanny in that play, and I will never forget it: every line she said didn't seem to be a line but seemed to be something she had just thought up. She wasn't acting with her co-star Charles Durning but seemed to be just interacting and talking off the top of her head, as she would have in a room with him, not on a stage. That might sound like what all actors are trying to do, but how few of them actually manage it! Maybe it was just a trick she had. Maybe it was a series of mannerisms that she had crafted over a lifetime of practice until they became magically convincing as a life being lived out on a platform under lights and with an audience watching.

"The Gin Game" is a decent play, a sturdy vehicle, though far from the quality of some of the world-class material Harris had played as a young actress. But I'll never forget the way she gradually revealed that the polite old lady she was playing was actually a bitter loser. When she spoke of a petty act of vengeance against her estranged son, Harris's voice took on a thick and gloating and triumphant quality when she cried, "I fixed his wagon!" Harris had an actor's face, which meant that she could make it beautiful or plain or anything else she wanted to, but her voice was unmistakable: breathy, plaintive, constantly biting into her words like apples and swallowing them down so fast and with such greed that you worried that she would make herself sick on words. Harris's voice was somehow burnt to a crisp, as if her oversized feelings had left this voice a scorched earth terrain that could still somehow bear all the emotional fruit she would need for the winter and beyond.

She was born in Grosse Pointe, Michigan, and her socialite mother was disappointed in Harris's lack of interest in dating and coming out parties. Harris was a born actress, an overly sensitive girl who would always stay sensitive to others. She did some theater in New York as a young woman before getting the role of her life: Frankie Addams in Carson McCullers's masterpiece on adolescent outsider-dom, "The Member of the Wedding." "I was twenty-four, at that time, and Frankie Addams is supposed to be twelve and three quarters years old, so I was twice her age," Harris said. Harold Clurman, her director, advised Harris to not worry about acting childish or like a child. "Your age doesn't matter," he told her. "You could be fifty-two and still play that part. If you put yourself in the circumstances and properly feel her pain people are bound to think you're the right age." 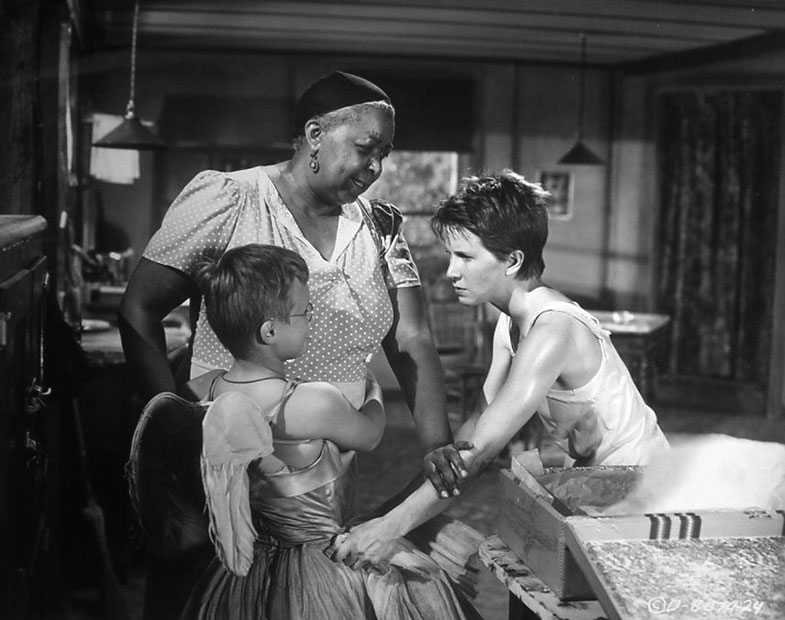 And so they did, and thankfully Fred Zinnemann used the original cast of the play when he directed his 1952 film of it. This is a performance from Harris that deserves to be legendary. She is a purely poetic actress, and no other actress or actor has ever had more poetic material than "The Member of the Wedding." Harris rips into all of these heightened McCullers speeches with such lyric abandon that it's easy to get lost in Frankie's freakishly insightful observations, her huge emotional needs, her fears and her imperious anger, her longing to fit in and her defiance in the face of more ordinary people. Harris goes all out, and there are very few other actors who have ever been this good so far out on a limb. When Frankie is pulled screaming from the wedding car of her brother and left in the dust as the car pulls away, Harris is so deep down in her character's bottomless adolescent pain that it feels like she'll never make it out again. This is a performance to be savored, to be studied, to be treasured for every McCullers line and every Harris line reading.
Advertisement

"The Member of the Wedding" is Harris's signature part, and the film of it would be enough to secure her place in the pantheon of American actors, but she will always be best known as Abra, the girl that James Dean loves in "East of Eden" (1955). That is Dean's movie, but Harris is right there with him, helping him, listening to him, feeling a kinship to him as one emotional freak to another. She seems to get a genuine delight from just looking at his extravagant physical contortions, and there's nothing at all conventional about her reaction to him. Harris is the first person to really get James Dean on screen, and she does it right in front of us with all of her feelings firing at once at him, her empathy, her flirtatiousness, her humor, and her stubbornness.

After scaling the heights of Frankie's fierce and verbose solitude, Harris seems to find some relief in focusing her attention on another person who happens to be absurdly beautiful and also absurdly needy and nasty and helpless. Think of her reclining out in the grass and listening to Dean's Cal, toying with a blade of grass in her mouth, or up on the Ferris wheel with him, when she shyly admits her lack of connection to his brother Aron (Richard Davalos), her official boyfriend.

Harris proved that she could be funny as Sally Bowles in "I Am a Camera" (1955), a film of her stage success, which won her the first of five competitive lead actress Tony awards. She gleefully camps up her own mannerisms in that movie and highlights the fun in Sally's exultant phoniness, so that even being stuck with Laurence Harvey as her leading man doesn't impede her much. All in all, "The Member of the Wedding," "East of Eden" and "I Am a Camera" made for an extremely distinguished start to what might have been a major film career, but Harris focused instead on the theater and on live TV, appearing as Joan of Arc and Queen Victoria and in lots of vehicles that were not exactly worthy of her in between stints as Nora in "A Doll's House" and Ophelia in "Hamlet." She started to get typecast as spinsters and neurotics, like the fearful Eleanor in "The Haunting" (1963), and her last worthwhile film role was in another McCullers adaptation, "Reflections in a Golden Eye" (1967), where she played an invalid who has cut off her nipples with a pair of garden shears.

From about 1970 on, Harris's film and TV career strangely deteriorated. She was treated and cast, it seemed, as just another working actress, as if everyone had forgotten that she was one of our special performing artists, one of our most vivid interpreters of emotional extremes. She played surprisingly little Tennessee Williams, even though she seemed made for parts like Alma in "The Eccentricities of a Nightingale" or Hannah in "The Night of the Iguana." On stage, she acted in acclaimed one-woman shows as Emily Dickinson, Charlotte Brontë and Isak Dinesen, and what amounted to a one-woman show as Mary Todd Lincoln.

I recently took a look again at her Emily Dickinson show, "The Belle of Amherst," on Netflix. I was only intending to watch a little bit of it, but Harris grabbed my attention and wouldn't let it go until I had watched the whole thing again. I'm not sure that what she does in that show is close to the way Emily Dickinson might have actually been. I'm also not sure that these "great lady of the theater" one-woman showcases were the best use of Harris's talent. But they were certainly better than her seven years on the primetime soap "Knots Landing" in the 1980s, which is unfortunately what many people will remember her for.

The glory of her initial work in the 1950s and '60s is in danger of being forgotten, but those who knew and worked with her will not forget her. I've never heard one negative story about Julie Harris. Whenever anyone talks about having met her or worked with her, a chorus of praise issues forth extolling her kindness and thoughtfulness. A whole generation of actresses that came after her tried to imitate Julie Harris's soulfulness, but none of them matched the intensity of her feelings, the dedication she had to her work, and the insight and compassion she brought to her embrace of the lonely and overlooked of this world, the "little leftover people," as Frankie scornfully called them, who retreat to their rooms and communicate through words because words are the best way we have.