In Memory of Joel

What was I going to do with these two cautious little boys, each clutching a stuffed Care Bear as if his life depended on it while trying to figure out, like Glinda in "The Wizard of Oz," whether the stranger before them was a good witch or a bad witch? 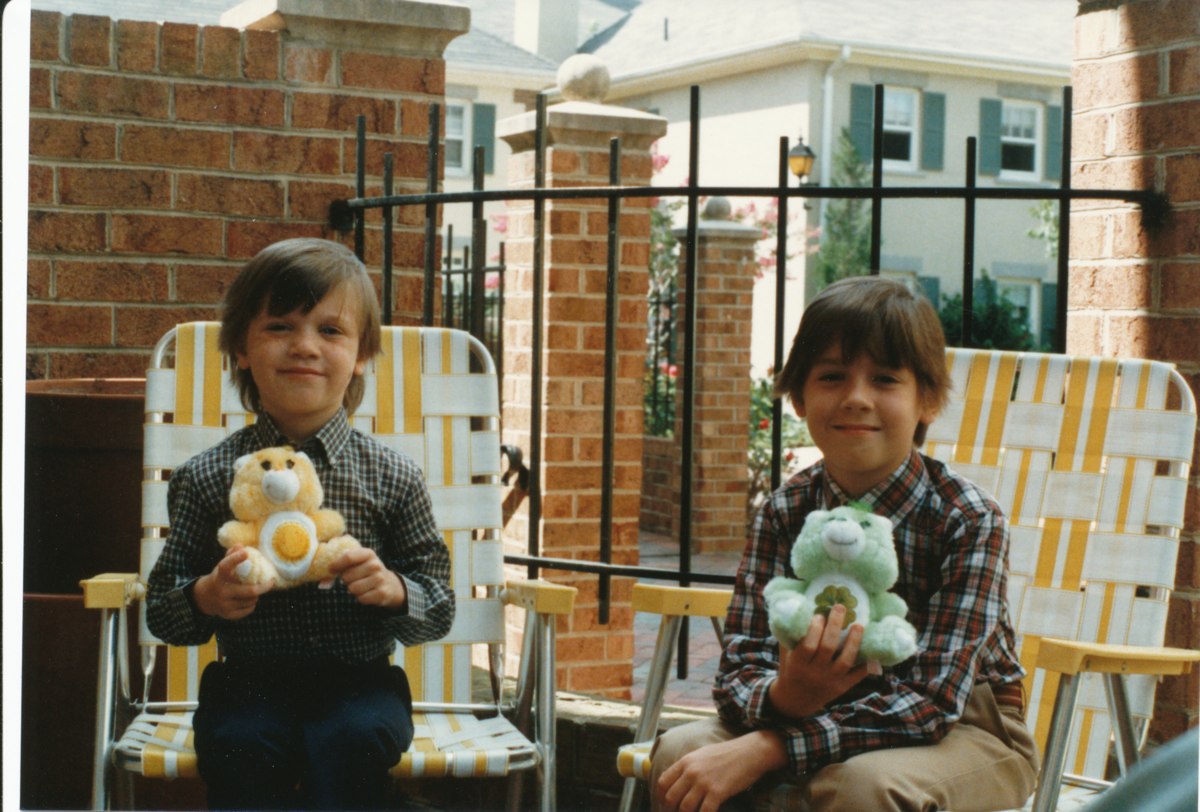 It was 1984 and I was rapidly coming to grips with the fact that I was about to take on one of the most thankless yet rewarding roles that an adult can ever assume: I was now a stepparent. For many summers and several school years to come, I would be sharing responsibility for Joel, then 6 (on the left in the photo), and Christian, almost 8 (on the right in the photo), and trying to find a way to form a bond that I hoped would last for the rest of our lives.
Advertisement

That first year, they seemed to spend an inordinate amount of time eating bowls full of sugar-encrusted cereal with their eyes glued to the inexplicable (to me, at least) cartoon adventures of He-Man and Skeletor on TV—soon to be re-enacted in their bedroom with action figures, of course. Alas, the monotonous power of Grayskull held no sway over me.

Luckily, it didn't take long to find a connection between us: We both loved movies, a fact I realized only after recognizing that the ditty they kept singing at random moments—"Now I'm the king of the swingers, I'm jungle VIP"—was from Disney's "The Jungle Book," recently re-issued in theaters.

The next summer, we were prepared: A VCR had joined our household, suddenly making films old and new as accessible as the nearest Erol's video store. Awaiting Christian and Joel was their very own copy of "The Wizard of Oz" (on beta—do not judge)—unlike me and their dad, they would never have to rely on the whims of network executives for a stingy once-a-year TV showing of the mother of all fantasy films.

They proceeded to watch Dorothy skip down that Yellow Brick Road with Toto, too, every day for the rest of their stay that summer—a ritual that I have since learned is not uncommon among children of the video age. That, of course, all changed when the father of all fantasy films—"Star Wars"—arrived on shelves. Awakening to the sound of wooshing light sabers and beeping droids each day rapidly replaced the strains of "Over the Rainbow" in the morning.

However, I knew we had finally found common ground when we all started laughing until we wept over the antics of a gang of litter-collecting bears supervised by a chubby park ranger in "In the Bag," a 1956 cartoon short attached to a tape of "Winnie the Pooh and Friends." It became a custom for one of us to break into the bouncy tune that accompanied their labors—"First you stick a rag, put it in the bag (bomp, bomp), that's the way it's done, it's a lot of fun (bomp, bomp)"—even years later.

These are the sorts of happy memories that thankfully have come flooding back to me in the wake of last week's terrible news that Joel, 35, and a father of two young boys himself, had died in an accident. That so many of them involve movies has made me somewhat reconsider the impact that home entertainment has had on family life since the '80s.

As much as I prefer a theater experience when it comes to cinema, knowing that you can easily share your childhood favorites with your kids—such as introducing them to the delights of a swashbuckling Errol Flynn in "The Adventures of Robin Hood" or the wonders of a flying Julie Andrews in "Mary Poppins"—in the comfort of your own home can be a welcome godsend at times.

Not that our family did not venture forth into the multiplex regularly. I must have picked a loser for us to see at some point because both Christian and Joel very loudly declared that they did not think they would like "Back to the Future" when I suggested it. My husband, Chris, and I dragged them along, anyway. The result: Unbeknownst to us, they asked their babysitter to take them to the movie again not just once but twice—something we found out when we had to cough up the money for their tickets.

We even took them to see Alfred Hitchcock's "The Man Who Knew Too Much" when it was re-released in the early '80s. They sat there in stone silence, not knowing that the movie was nearly 30 years old. Lord knows what sort of psychic damage they incurred since it did not dawn on me that a film about a kid getting kidnapped might not have been the best idea. But they managed to avoid any Que Sera, Sera-induced bad dreams, at least that night.

Somehow, sneakers regularly played a role in the aftermath of seeing films with them. After attending Tim Burton's "Batman" in 1989, we bought Joel the coolest pair of Converse high-tops I had ever seen. White, as I recall, with purple laces and Joker faces scattered all over. Sadly for me, they did not come in adult sizes.

Then, I showed "Ferris Bueller's Day Off" to my stepsons, a decision I ultimately came to regret. Countless pre-Google hours were spent shopping for the kind of sneakers worn by Matthew Broderick in the playing-hooky comedy (I believe that mission was a failure). However, little did I know Joel eventually would treat the movie as if it were a training manual for how to skip school. Darn that John Hughes.

But the movie that most touched Joel and me was one that I received after I started writing about film for USA TODAY: The 1973 animated version of E.B. White's timeless "Charlotte's Web." My husband and I often took turns reading aloud to the boys before bedtime and the adventures of Wilbur and his spider pal was regularly requested. While the craftsmanship of the Hanna-Barbera movie was nothing special, the voices chosen to bring these familiar characters to life—Debbie Reynolds as Charlotte, Henry Gibson as Wilbur and especially Paul Lynde as the opportunistic rat Templeton—were perfection. If any VHS tape ever got worn out in our house, it was that one.

A favorite memory of my husband is of Joel lying on his bed, wiping tears away while he reads the touching conclusion of "Charlotte's Web" by himself. Thinking back to then, I realize that the book is very much about how death is inevitable in nature—but also how one learns to deal with it by making sure that something of the past continues on in the future.

Wilbur repays his loyal and thoughtful friend Charlotte by looking after her children after she is gone, assuring that a part of her will be carried on.

Already, Joel's family is taking steps to do the same with his two young sons. And, in this difficult time, we can all take some comfort in knowing that his beautiful spirit already lives on in them.