Just when we need laughter more than ever, we lose one of the great ones. And one of the nicer ones, too.

Comedy mastermind Garry Marshall, who died on Tuesday at age 81 after suffering a bout of pneumonia following a stroke, had a knack for knowing exactly what the country’s TV and film audiences were craving even before they even knew it themselves.

After honing his craft by writing for such sitcoms as “The Dick Van Dyke Show” and “The Danny Thomas Show,” the Bronx native created his own slate of hit series by smartly capitalizing on the nostalgia craze for the mid-‘50s and ‘60s that was first hinted at with the 1971 Broadway musical “Grease” and  George Lucas’ “American Graffiti”  in 1973 with “Happy Days,” which ran from 1974 to ‘84. He somehow made greasers, poodle skirts, saddle shoes, and soda shops hip again in our homes on a weekly basis. 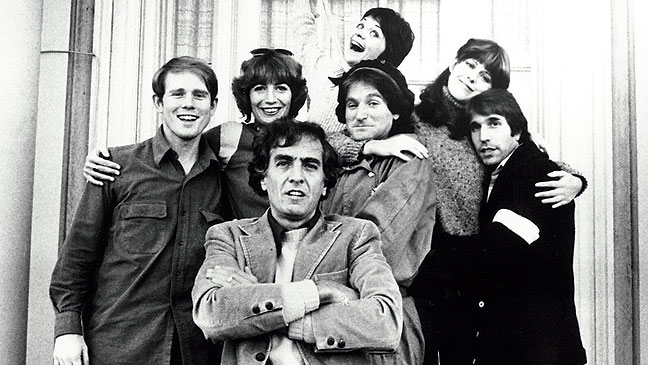 Marshall also had a second sense when it came to spotting talent with that “It” factor. Though onetime child star Ron Howard as nice-guy Richie Cunningham was ostensibly the star, it was Henry Winkler’s leather-jacketed biker The Fonz with his trademark thumbs-up stance and celebratory “Ayyyy!” as well as the put-down “Sit on it!” who became the breakout character of the series. That is, until Fonzie pulled a stunt that involved water-skiing over a predatory fish during the show’s fifth season premiere and launched the phrase, “jumping the shark.”

In a 1995 interview for his showbiz memoir “Wake Me When It’s Funny,” Marshall—who called himself the Norman Rockwell of television—told me he was a sucker for sugar-coating the past. “I am nostalgic, almost to the state of melancholy. Me and Hamlet. I always like to look back and see what went on. It helps me go forward.” 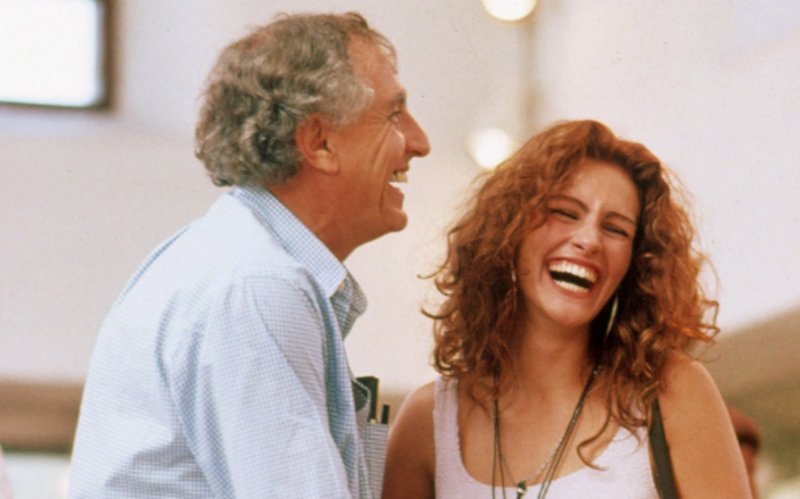 That philosophy came in handy once more when he decided to revive a long-dormant movie genre—the screwball romantic comedy—back when action flicks like “Lethal Weapon” and “Die Hard” were the rage, with 1990’s “Pretty Woman,” an unlikely Disney fairy tale about a beautiful streetwalker who falls for her rich prince of a business-exec  client  that turned Julia Robert into a superstar. He pulled off nearly the same Cinderella stunt for younger audiences with 2001’s “The Princess Diaries,” with a career-making turn by a then-18-year-old Anne Hathaway as a clumsy schoolgirl who learns she is the heir to the throne of a small European country.

Marshall wasn’t Jewish even if he spoke with a distinctive Bronx honk. But if there were ever a mensch in Hollywood, he fit the bill. He was able to charm no less than Julie Andrews into doing her first Disney movie since she won an Oscar for her flying governess in her 1964 film debut “Mary Poppins” as Hathaway’s estranged  royal  grandmother. “I am devastated to hear of Garry’s passing,” Andrews said after hearing the news. “He was a dear friend and colleague…generous to a fault.” She would return for “The Princess Diaries 2: Royal Engagement” in 2004 and there had recently been talk of another sequel.

Also expressing his sorrow was actor Hector Elizondo, Marshall’s good luck charm who appeared in all of the 18 films that he directed, starting with 1982’s medical TV series spoof “Young Doctors in Love.” He was a kind man, an elegant man, and a loyal, loyal man,” Elizondo said of his friend. “He just elevated the atmosphere he was in. He mentored so many people. He loved seeing character in people. He used to say, 'Everybody has talent, Hector! Everybody has talent but it's the character that makes the difference!'"

Yes, Marshall knew from character and his proudly class-conscious middlebrow film work overflowed with it while delivering a moral lesson or two, whether critics liked it or not. His big-screen efforts often displayed a more serious edge than his TV efforts. His second film that has since become a sleeper favorite, 1984’s “The Flamingo Kid,” featured a young Matt Dillon impressing as a middle-class, high-school grad who ignores his father’s advice and falls for the easy-money lifestyle of the older gin rummy players at the beach club where he works. With 1986‘s downbeat “Nothing in Common,” he paired Tom Hanks—who did a guest spot on “Happy Days”—with Jackie Gleason (in his final film) as a carefree ad exec forced to care for his cantankerous ailing father. 1987's “Overboard” was a return to a zanier form, starring Goldie Hawn as a spoiled heiress who loses her memory and is tricked into thinking she is the wife of Kurt Russell’s low-brow carpenter and mother of his unruly sons. 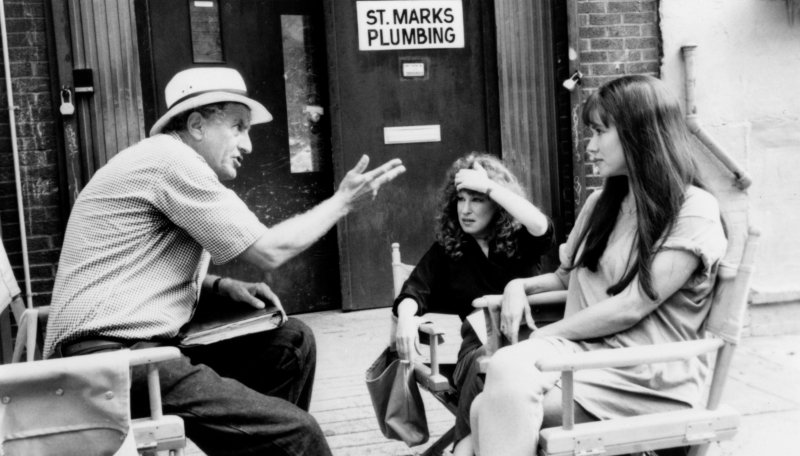 Then came the mother of all tearjerkers, 1988’s “Beaches,” a bosom buddy pic about a brassy entertainer (Bette Midler) and her blueblood childhood friend (Barbara Hershey) who end up rooming together in New York City until have a falling out over a guy. Several husbands, babies, career ups and downs and other life-altering events later, tragic circumstances bring the two chums back together and the bawling begins to commence to the tune of “Wind Beneath My Wings.” Critics cried “foul” instead, but on opening weekend, I witnessed weeping amongst my fellow audience members that took on biblical proportions.

Like sister Penny, whose own directing output included such critical and box-office successes as “A League of Their Own” and “Awakenings,” Marshall would also act on a fairly regular basis. He supposedly has an uncredited role as a hoodlum in 1964’s “Goldfinger.” But he proved much more memorable—if essential—in such supporting roles as the hard-ass casino manager in 1985's "Lost in America," who refuses to refund the life savings that ex-ad-exec Albert Brooks’ crazed wife squanders while playing roulette.

Also classic was his network boss in the soap-opera parody 1991’s “Soapdish,” as he expresses his admiration for TV fare that is “cheap” and “peppy.” He was a regular on TV’s “Murphy Brown” as impulsive network executive Stan Lansing in the mid-90s and made his last acting appearance as Walter Madison, father of Matthew Perry’s slovenly Oscar, in an episode this year of the revived “The Odd Couple”—the original sitcom version of which Marshall worked on in the ‘70s.

While he was influential, Marshall was never going to be cutting edge. His last three movies—2010’s “Valentine’s Day,” 2011’s “New Year’s Eve” and this year's “Mother’s Day”—shared the same cornball premise of an all-star ensemble cast celebrating a specific holiday. Groans could often be heard at critic screenings. But moviegoers ate this schmaltz-soaked popcorn fare up as the three films racked up almost $200 million domestically.

He didn’t have it within him to exude arthouse cool. Instead, he exuded a warmth and an abiding respect for fellow humans that touched almost everything he produced. You have to go back to the Golden Age of cinema to find a filmmaker who gave so many career-boosting roles to actresses. I remember running into him on the Disney lot while eating at the commissary and he greeted me as if I were a family member. We had only spoken once in person and a couple times on the phone but he remembered me. The last time we spoke was for “Valentine’s Day.”

I was doing a piece on the three “Twilight” leads and the films they were doing outside of the franchise. Marshall was savvy enough to cast Taylor Lautner after someone showed him the trailer for “The Twilight Saga: New Moon.” “I saw he could jump around and that his shirt was never on, which we turned into a joke,” Marshall said, “Who could guess he was a fine actor?” He also inadvertently caused a romance to bloom briefly between Lautner and co-star Taylor Swift, and the resulting publicity helped attract a younger age group to the film.

Marshall, as always, knew how to pull the best out of such novice youngsters. “I didn’t whisper ‘Chekhov’ into his ear. He is a physical actor and I had him run hurdles and do back flips. I made them both pop right off the screen. That is 90% of it, really. I love to discover new people. The way the kids yelled out during the titles when Taylor’s name appears, it reminded me of back when Fonzie was popular. Besides, it would be egotistical of me to think they just want see my work.” Egotistical, perhaps. But for most of his career, very true.