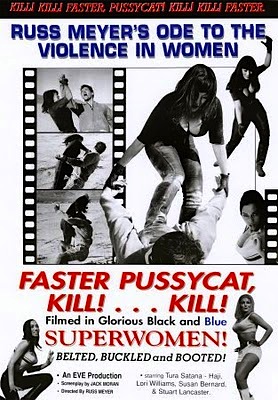 Russ loved to tell me, "Ebert, the damn films still play! Because he owned all his distribution rights, he knew they did. He had 35mm prints of his most successful titles constantly circulating, and believed "Beyond the Valley of the Dolls" could have become another "Rocky Horror" if Fox hadn't been ashamed of the X rating.

I think the one he was proudest of was "Faster Pussycat! Kill! Kill!" That was because it was made on his usual bargain basement budget, filmed with a small crew, and continued to be in demand. A few days before this appearance on Conan O'Brien, Russ called me and said, "Who else has a drive-in movie made in 1965 that they want him to talk about 35 years later on network TV, because it's still popular?"