The Fall and Rise of "Falling Skies"

After the dinosaur adventure disaster that was "Terra Nova," you'd have thought producer Steven Spielberg had gotten the Western Union saying he could no longer get away with re-selling of Reagan era family values and retrograde gender politics in a post-Bush depression. But no—he followed it with the alien invasion programmer "Falling Skies," whose mince pie of musty tropes, Tea Party pandering, reflexive sexism and mansplain exposition style were slathered in treacle. And let's not even talk about the mechanical aliens imported from "Robocop"'s ED-209 without even a thank you note. 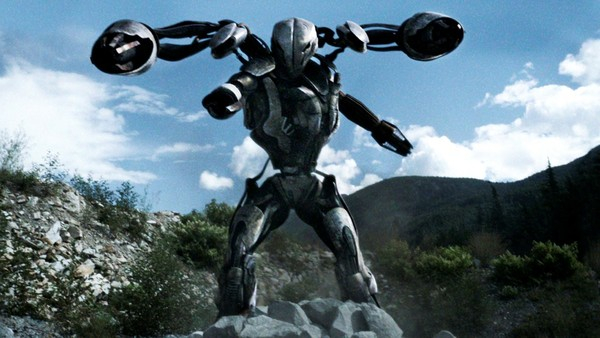 But as Season Three ends we know that hell can freeze over and pigs can fly because, thanks to some top writers in the genre hired, I assume, to revivify and save Spielberg's turkey from the worst of his inclinations, "Skies" is now not only not terrible, but terrific, a smart, overwhelmingly emotional one of a kind. It's become a transgressively spiritual war story that uses the persistence of constant loss as a way to explore how we redefine family in hard times. The immigration allegory and gender power and culture war subtexts enrich but don't overwhelm the show, and the violence is designed to generate anxiety rather than action-film kicks. Yes, it sometimes meanders, but when you think how monumentally terrible "Skies" was so recently, it feels like we're in the realm of the miraculous, and that warrants some taking stock.

The spawn of Spielberg and Robert Rodat ("Saving Private Ryan"), "Skies" starts after humanity loses an alien invasion. A hardscrabble group of patriots—the 'Second Mass', as in the regiment of Battle of Gettysburg fame—fight the brown-skinned, multi-legged, creatures that humans dubbed "skitters," a name that always made me think of delicious candy. The skitters' main threat is in their numbers and ability to use technology to fool young people into believing their side of the story. Later it's revealed that the skitters are actually slaves to the bio-mechanical Overlords. A group of rebel skitters lobby for the right to fight alongside humans, going so far as to wear American colors on their skin. (Again, science fiction is never about the future or space or aliens. It's about Now through a metaphor filter.) 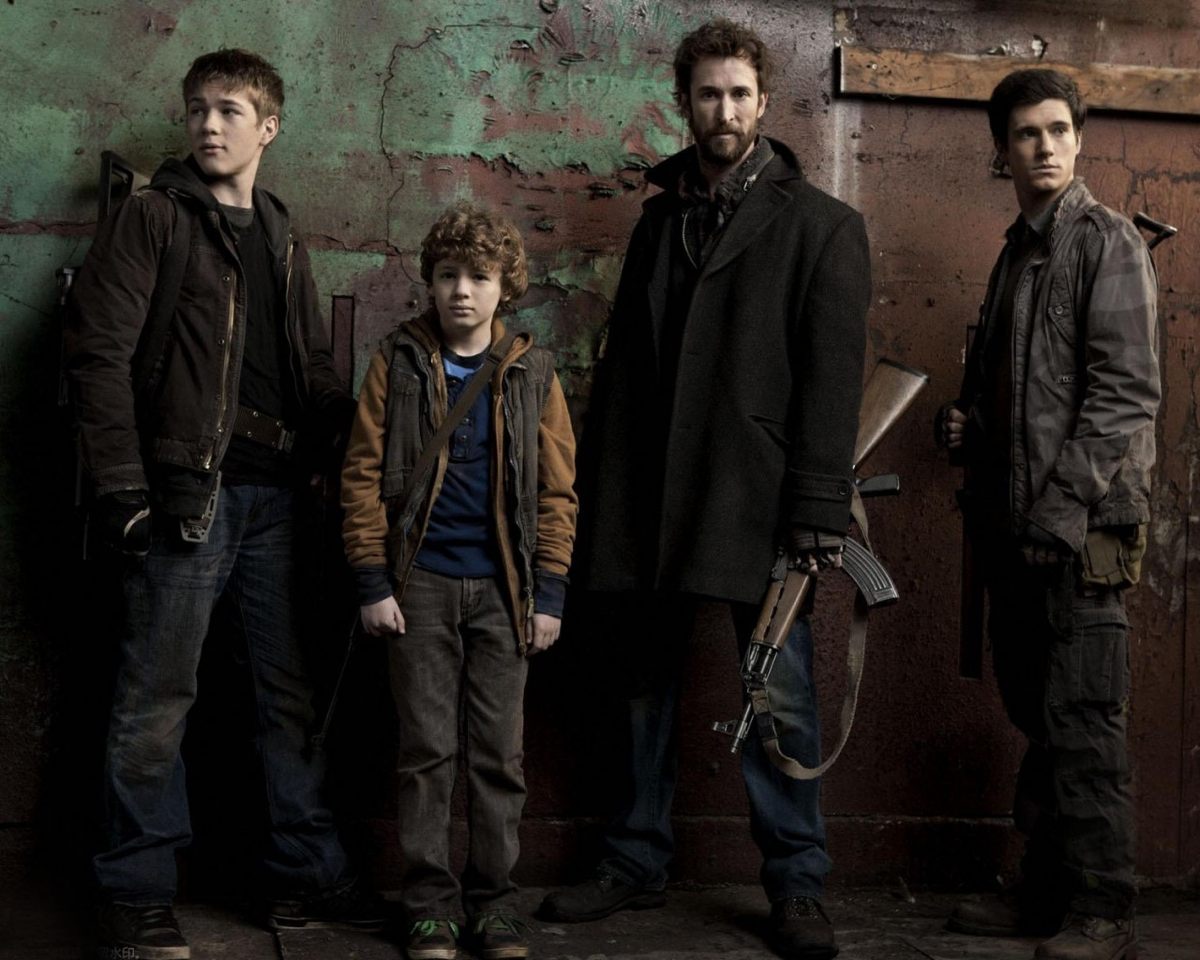 Heading the Second Mass is Tom Mason (Noah Wyle), a former military history professor prone to sudden Revolutionary War ruminations. He has three sons: 16-year-old Hal (Drew Roy), tween Ben (Connor Jessup) and ten-ish Matt (Maxim Knight, in a vulnerably plucky, star-making turn). As if to portray all stages of the male life experience, the show includes Gulf War vet Dan, played by Will Patton with bellicosity turned to 11. With the Second Mass out-numbered, out-gunned and ridiculously dwarfed, tech-wise, the first two seasons are based around Tom's belief that U.S. history proves that the home field advantage always wins. This is what my shrink calls "magical thinking."

Anyway, the show was terrible. And as for "Skies"' women, oy. There was nervous nurse Lourdes (Seychelle Gabriel) playing submissive mouse to Mason's Big Cheese; foxy Karen (Jessy Schram), an alien-possessed Evil Babe so evil you expected her to find a honey blond mustache to glue on and twirl, and ever-surly Maggie (Sarah Carter), a good actor with the badass physicality of Katee Sackhoff but no character to attach it to. But for a pure tincture of "Skies"' female trouble, I present you with the strange case of Doctor Anne Glass (Moon Goodblood), the only female allowed even a very small plot of "Skies"' narrative land. When the Second Mass captures a skitter, Dr. Glass tires of everyone arguing about what to do and just rams her fist up the thing's mouth and jabs at its brain until it dies a shrieking, horrible alien death.

Pretty badass, right? Wrong. The show steals the triumph of Dr. Glass immediately to restore male dominance. She abruptly freaks out, runs away, and dissolves into a puddle of tears on Tom 's shoulder as she whines about her family photographs. Put it this way: try to imagine Tom finally figuring the key to vanquishing the alien menace, breaking down in tears, and wandering the halls for a shoulder to cry on.

Until suddenly they were.

I like to think that Spielberg, a child of divorce who has always idealized the intact, 1950s-style, dad-dominated family unit, took a fearless inventory, and realized that at least some of the problems that had dogged both "Terra Nova" and "Falling Skies" might be solved by people who grew up in an America more defined by a more fluid sense of family—still the core of this show. It's the America of single-parent homes, stay-at-home dads, and single-gender couples who weren't surprised when a May 29, 2013 New York Times piece found that "four in 10 American households with children under age 18 now include a mother who is either the sole or primary earner for her family." 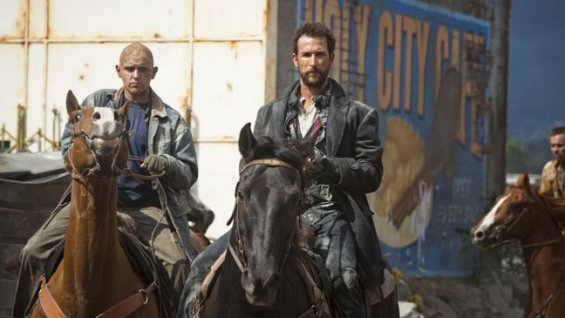 The proof of new-"Skies" is there in the first image of Season Three: a determined young woman's face in close-up looking at a row of lime-dust-covered slaves, the sun glaring. You could be excused for thinking you've tuned into another show entirely. You kind of have. This "Falling Skies" finds humanity aided by The Volm, a noble, melancholic alien race in multigenerational war against the Espheni, the real and proper name for "skitters", which means I don't have to think about delicious candy every time people talk about them.

Thanks to the Volm's tech and humankind's pluck, the Second Mass is actually gaining ground. Still, this lime quarry attack is brutal stuff, with the group's youth a well-oiled killing machine, right down de-harnessed girl Deni (Megan Danso), who casually rips an Espheni's brains out in the quintessential Glassian style. The battle peaks with a classic Spielberg dolly-in/angle-up shot meant to carve heroes' faces in the Mount Rushmores of our imagination. But since Tom—now President of the New United Sates of America—is late to the battle, the image instead admires Deni, Ben, and a bloodied Espheni rebel.

It's the opening volley in the season's real-world America immigration crisis allegory, where the Espheni understand that the most effective way to destroy community is to nurture mistrust and Other-hate and watch people tear each other apart. Having settled in Charlotte, North Carolina, only creates a level of comfort that more easily allows the Overlords' micro-tech probes to go undetected and wreak maximum interpersonal damage while sucking up Second Mass military plans.

No matter what's happening in an episode's story, "Skies" nags at questions that supposed quality shows like "Ray Donovan" and "Low Winter Sun" don't think to even treat poorly, because nihilism is a full-time job. When is the right time to forget your old life? What violence is and isn't justified? Who decides how we pass on our legacy? "Falling Skies" triumphs when it shows people attempting partial answers.

In the episode "Badlands," a silent, shadowed artist welds a "Tree of Liberty" out of bronze and tin for what will be a dreamlike memorial. Public art and the procedures of loss are celebrated as a child choir sings a starkly beautiful, modernist hymn. People hang metal 'leaves' inscribed with the names of their beloved lost on the tree's branches, pausing for prayer. It's "Falling Skies"' creators crafting a new spirituality that works for people coping with old gods that looked the other way. There's a breeze of classic Spielberg optimism here that just makes everything achier. 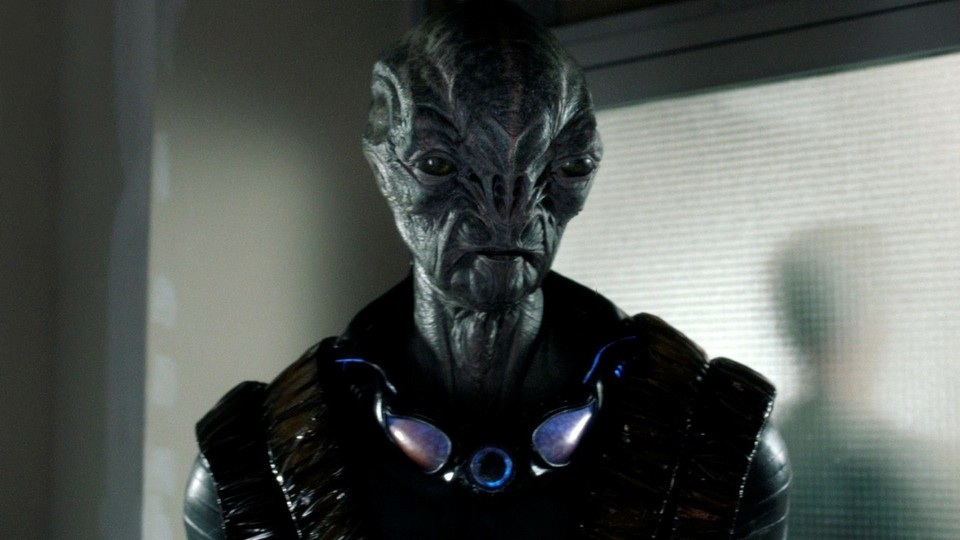 Tom, meanwhile, is arguably closest to a Volm named Cochise (Doug Jones). So it's crushing on a personal level when, after the human/Volm alliance leads to the destruction of an Espheni installation, Cochise' father announces, as nicely as he can, that because humans are physically, intellectually and technologically inferior, there can be no place for them in the ongoing Volm/Espheni war. However, the Volm will be happy to relocate humankind, with full protection, supplies, and housing to…Brazil. Enraged, Tom pledges that humans will fight to their last breath for their planet. Dan splutters about a new, better resistance, one that's all human, dammit! (Dan's daughter, played by Laci J Mailey, doesn't get the downside of a life of protected leisure lying on beautiful beaches drinking Mai-Tais, but the men won't hear of it.)

"Skies"' great new card trick is the merging of macro and micro. While the military deals with their pyrrhic victory, we return to the story of Doctor Glass and Tom's strange child, who grows at a terrifying intellectual rate while continuing to appear as an infant—until there's no hiding her true nature from Tom in a shocker reveal: Still only a few months old, Lexi is now the height of a six year old. When she sees Lourdes in agony and near death from the hundreds of insect-like probes buzzing in her head, a single glance makes them fall out of her eyes and turn to what looks like onyx dust. Then Lexi says "Hi Daddy!"

Kudos to Wyle for getting down the mix of shock, dawning realization that it was something the Overlords did when they abducted him that caused Lexi's difference, and bursting love and pride for her being so awesome. And then his terror for what all of this means: Having an older son, Hal, who caused untold numbers of people to die while under alien control; and Ben, who may have had his harness removed but is still in psychic connection with the Espheni, a boy of two countries who can separate from neither; and now a daughter with the DNA of two worlds. Hal has three children who are immediate danger from a body politic recently betrayed.

But even with his fear of what the fragged Second Mass might do to his family, now poster children for the evils of alien miscegenation, and his barely checked terror of having the Other alive and doing things in his own body—even with all that, Tom doesn't bail, or balk at this radically new idea of family. If anything, he loves them more fiercely. Tom proves himself the equal to Doctor Glass, who all season long has had to live with, explore and control the information about these issues as they developed, never giving in to fear or other peoples' hysteria, alone, for her reasons.

Much like "Battlestar Galactica" finales, this season of "Falling Skies" ends with nothing but exciting question marks. It has so effectively destroyed its settings, goals, and our assumptions while pushing its characters to such no-way-back extremes that it's hard to imagine what the show might be next season. But I'm betting it involves lots of angry villagers.