Ebert Interruptus Feels the "Heat" at Conference on World Affairs

Michael Mann's 1995 modern classic, "Heat," starring the towering duo of Al Pacino and Robert De Niro, will be dissected during the week-long "Ebert Interruptus" event held during the Conference on World Affairs at the University of Colorado Boulder. Named after the late film critic and longtime CWA participant Roger Ebert, the event follows his trademark format for the "interruptus" series, kicking off with an uninterrupted screening of Mann's film during the first day of the conference. The next four days feature screening sessions in which members of the audience are encouraged to holler out, causing the film to freeze so they can ask a question or make an observation. This makes for a deep dive into the filmmaking process that no cinephile can afford to miss.

RogerEbert.com editor Matt Zoller Seitz, a Brooklyn-based writer and filmmaker, will host the sessions this year. He was a finalist for the 1994 Pulitzer Prize in criticism, and is also the television critic for New York Magazine and Vulture.com. Below is a tweet Seitz posted about the film last year. 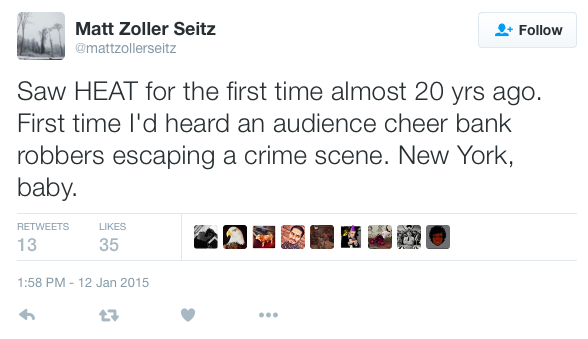 The year marks the 68th installment of the Conference on World Affairs. It runs from Monday, April 4th, through Friday, April 8th, and features free events, panels, performances, concerts and lectures from roughly 100 visiting activists, scholars, artists, journalists and other participants. The first screening of "Heat" is scheduled for 2 p.m. on April 4th in Macky Auditorium. The following sessions will be held in Muenzinger Auditorium at 4 p.m. April 5th, 4:30 p.m. April 6th, 4 p.m. April 7th and 4 p.m. April 8th.

For a full schedule of CWA events and panels, visit the university's official site.