Petzold’s concerns Nelly Lenz (Nina Hoss), a Jewish cabaret singer who survived Auschwitz, only to be shot in the face in the last desperate days before liberation. Nelly is taken to a clinic by a friend, Lene (Nina Kunzendorf), and the surgeon there offers Nelly her choice of new faces. She insists that he try to restore her own. Nelly searches through the rubble and dives of Berlin for Johnny (Ronald Zehrfeld), the husband who may have betrayed her to the Nazis. She finds him, but not the reunion she craves, because Johnny sees only a certain resemblance to the wife he believes is dead. Nelly’s exact features will survive only in memory and photos. But this new face is close enough for Johnny to have an idea. He’ll have this stranger impersonate his dead wife, and collect the money she stands to inherit from the family that the Nazis murdered. 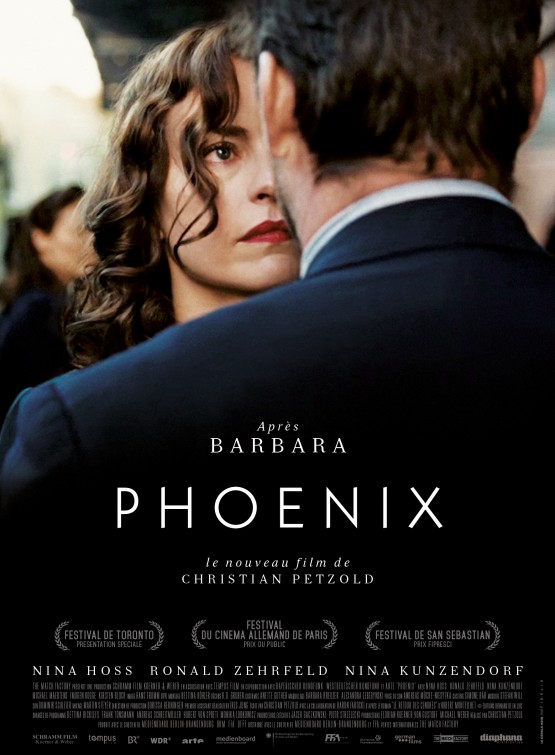 As it happens, Petzold has seen “Vertigo”—any director who hasn’t seen “Vertigo” is one to regard with deep suspicion—but “Phoenix” calls up other influences, too. When Nelly roams the clinic at night, her face hidden behind a mass of bandages, it’s easy to see Edith Scob wandering through her mad father’s mansion in Georges Franju’s “Eyes Without a Face.” When Nelly is dolled up in a black suit with a veiled hat, it evokes Hanna Schygulla, maneuvering through a new but still-ruthless Germany in Rainer Werner Fassbinder’s “The Marriage of Maria Braun.”

The delicate, mournful song “Speak Low,” sung so effectively by Nina Hoss in “Phoenix”’s final scene that it will be forever linked to her, is from the 1943 Broadway musical “One Touch of Venus.” Petzold says he has seen the 1948 movie, in which Robert Walker has brought to life this statue of the ideal woman (Ava Gardner, that is to say, a goddess), and still can’t control her; “Speak Low” is what she sings as she leaves her mortal lover. “One Touch of Venus” is a comedy, yet knowing its plot somehow makes “Phoenix”’s finale more wrenching, not less.

But good movies converse with one another across time, and the connections between them are sometimes in the mind of the audience, not the director. That doesn’t make them irrelevant. “Phoenix,” my film of the year so far, can set off a lot of associations.

One of the film’s few bad reviews came from Peter Bradshaw of The Guardian, who said “reconstructive surgery could never come anywhere near the convincing results shown here: not in 1945 – and not in 2015, come to that. The flaw is fatal, and the fantasy crumbles.” 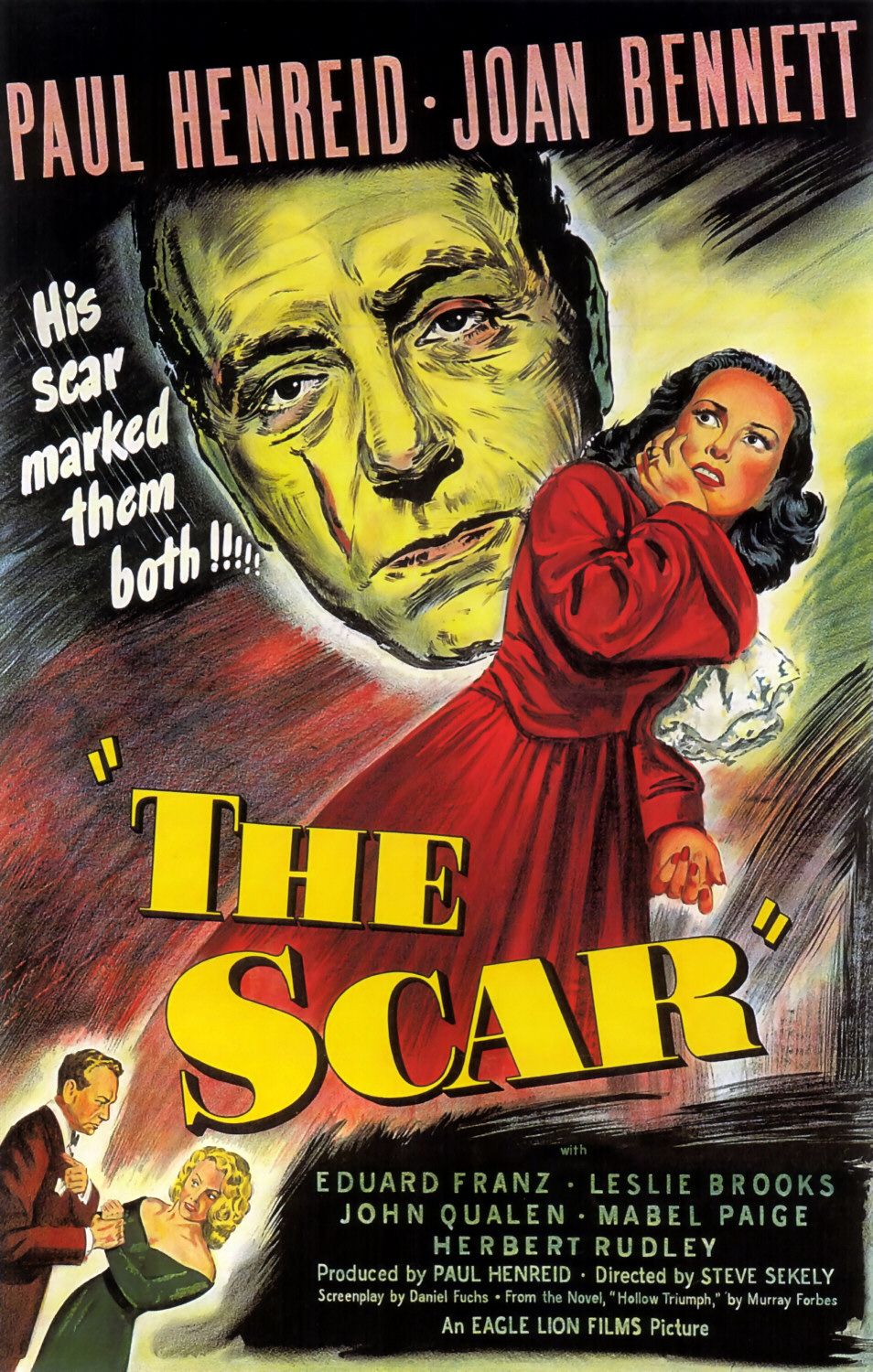 I strongly believe that this is dead wrong. Not merely because it’s an example of the mindset that Hitchcock himself dismissed as “the plausibles,” but also because the plot is not nearly as credulity-stretching as it seems. Similar things have been said about “The Scar,” aka “Hollow Triumph,” a film noir from 1948. Paul Henreid plays Muller, a gangster who encounters his precise double in the person of psychoanalyst Dr. Bartok, save for Bartok’s prominent knife scar across one cheekbone. On the lam, Muller decides to murder Bartok and take his place, and to do so, Muller works from a photograph and cuts his own face.

But in an earlier scene, we see the photographic developers flip the image, reasoning that no one will know the difference. Thus Muller puts the scar on the wrong side of his face. And here is the psychological genius of “The Scar”: The boys from the darkroom were right. Almost no one notices. Not even the secretary, played by Joan Bennett, who was in love with Bartok.

But that’s ridiculous, say the plausibles. No, it isn’t. Think of the people who have a substantial change in appearance—nose trimmed, waistline altered, a bandage or even a cast—and are astonished to discover that almost no one notices. Think of the thousands who go to jail on faulty eyewitness testimony. When Bennett finally figures out the ruse, it’s because she knows the cold, indifferent Bartok couldn’t suddenly began to lust for her. Faces change; emotions don’t.

But like Johnny, we privilege our vaunted logic over our feelings. We think we observe; most of us don’t. And “Phoenix” adds an extra, self-serving layer of reasons why Johnny wouldn’t recognize his wife, and why their old friends would believe that a woman fresh out of Auschwitz looks like post-surgery Nelly: It assuages their guilt. “My wife will never know what I did,” thinks Johnny. “Everything is alright now that the Nazis are gone,” think the friends. 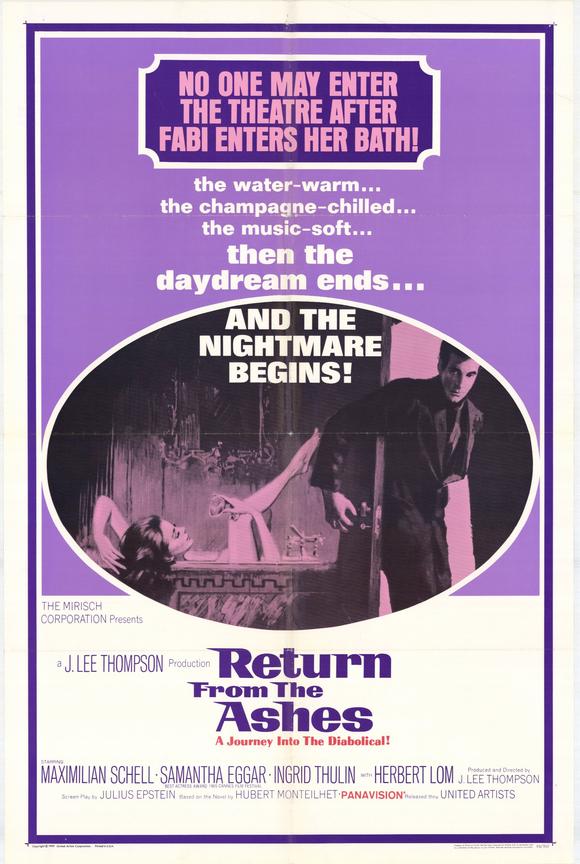 Ah yes, those old friends of Nelly and Johnny, who show up towards the end of the film. That brings me to one movie Petzold, surprisingly, says he hasn’t seen: “Return from the Ashes,” directed by J. Lee Thompson in 1965, based on the same Hubert Monteilhet novel as “Phoenix.” Ingrid Thulin plays a Jewish anesthesiologist who falls in love with Maximilian Schell’s scheming, social-climbing chess pro. They marry just as Paris falls to the Nazis, and she is arrested and sent to Auschwitz. The Thompson film has a far more convoluted plot and isn’t as resonant (despite touching work by Herbert Lom, who basically has Nina Kunzendorf’s part). But it’s highly entertaining, a brash and at times lunatic thriller graced by Samantha Eggar as Thulin’s viperous stepdaughter, a character whom Petzold jettisoned.

The one scene that can stand up to logical comparison with “Phoenix” is the first. “Return From the Ashes” begins on a train to Paris late in 1945. The carriage is full of tired middle-class people, an elderly man, a matronly woman traveling with a little boy of about 10 years of age, and Ingrid Thulin. (Thulin here looks remarkably like post-surgery Nelly: hollowed-out cheeks, bruised eyes, straw-like hair, even a similar shabby raincoat.) The train is traveling very fast. The boy entertains himself by kicking the door to the outside of the rail carriage—bump, bump, bump, as steady and as maddening as a dripping faucet. Then we see his bored, curious hand reach for the door latch. The old man sees it too, shouts “be careful,” but it’s too late. The little boy opens the door and falls through a blast of smoke and air, presumably to his death. The mother wails, someone pulls the cord, the train halts and the carriage fills with people, as the conductor comes to lead the distraught mother away. And of all these passengers, the only one who doesn’t so much as shift in her seat is Thulin. She is utterly still, staring. “Really, such lack of feeling,” says one woman, and the old man starts to agree. Then he breaks off mid-word, as the camera moves to show us the number on Thulin’s arm.

It’s a shattering opening, an example of what melodrama, unfettered by notions of taste, can show that a more sober drama cannot. There is nothing else in the 1965 film that comes so close to suggesting what implacable, hideous cruelty and constant death might actually do to someone’s personality, and it’s the sole moment that throws survivors’ trauma directly in the face of bystanders. It reverses “Phoenix”’s trajectory, putting first what Petzold saves for last.

Because it’s only in the closing minutes of “Phoenix” that we watch Johnny finally, finally get some picture of what he’s done, and what he’s lost. But even then, as Nelly sings and Johnny plays, the audience of blandly indifferent post-war Germans regard Nelly with no trace of guilt. They have already convinced themselves that they did nothing that needed forgiving.

And here is where I come to my last conversation with “Phoenix,” because sometimes, a film can alter how you see something that lies well outside movies. As soon as I got home from seeing the film, I opened my copy of Salka Viertel’s memoir, “The Kindness of Strangers.” She grew up in a well-to-do and cultivated Jewish family in Sambor, Galicia, which is now part of Ukraine, moved to California with her family in 1928, wrote screenplays (including “Queen Christina” and “Deep Valley”) and turned her home into a magnet for people fleeing Hitler’s Europe.

When I read the book, I couldn’t understand Viertel’s decision at the end of this passage, and I am not sure I do now. But in my mind, the trajectory of Petzold’s heroine is now caught up with the following story, permanently.

Viertel’s brother Siegmund, known as Dusko to the family, didn’t make it out of Sambor in time. By 1946 Viertel was convinced that Dusko hadn’t survived; she got one unconfirmed report that her brother had jumped off a train to the camps and been killed by the SS. Frantic to keep any details of Dusko’s fate from their elderly mother, who had managed to reach the U.S. in 1941 and was living in her daughter’s home in Los Angeles, Salka made a point of intercepting the mail every day.

One morning, Viertel opened a letter from a woman named Viktoria, an orphaned Galician who had been raised alongside Salka and Dusko in Sambor, as part of the family. Viktoria wrote, “In 1943 [Dusko] came to my house begging me to hide him, but as we are living in a rented place I could not do it, and since the last German Aktion I have not heard from him again.” Aktion, Viertel knew, was the word used to mean rounding up Jews.

Viktoria closed the letter by saying she now had four children, and asking, “would Salka, who has always been like a sister to me, send us a food parcel?”

I wrote her that she had forfeited the right to appeal to my sisterly feelings. She had cruelly denied shelter to a hunted Jew, whose father and mother had given her love and devoted care since she was born, and she had allied herself with monsters and torturers. My tears stained the paper and I had to stop. Could I reproach this cowardly woman for not risking her life? Hadn’t others, more powerful than she, stood by indifferently when these unspeakable horrors took place? She was only one among millions ….
I tore up the letter, mailed a CARE package to Sambor, and never told Mama what happened.