Usually, I'd be scurrying around the San Diego Comic-Con preview floor looking at the displays, seeing what new and amazing LEGO creations were on display and, after spending a month prior determining the one exclusive I wanted, rushing into line for that item. This year, I only make a slow-speed dash through the throngs for a peek. Wednesday night was the red carpet premiere of the latest reboot installment: "Star Trek Beyond" and I had press seats.

Some attendees received tickets from a fan event at the Los Angeles-based Paramount Pictures. There, attendees were the first audiences to see the new trailer for "Star Trek Beyond" and witness a ceremony renaming a road outside Stage 31 "Leonard Nimoy Way." Others stood in a line earlier in the day for the remaining tickets, given away through a lottery beginning at noon. 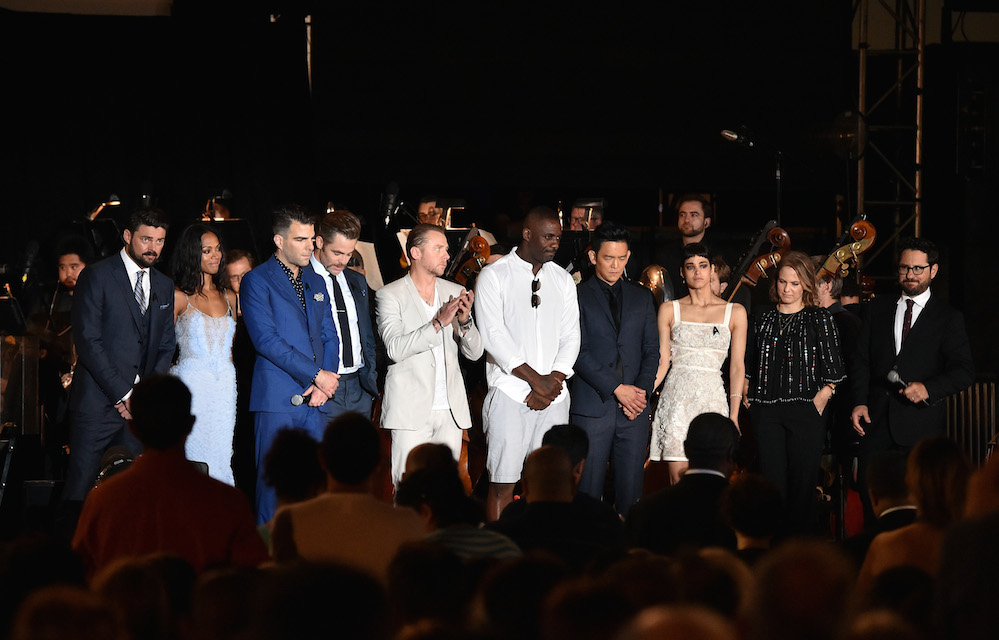 According to Paramount Pictures, this special screening was the first-ever outdoor IMAX premiere at the Embarcadero Marina Park (just behind the Convention Center where SDCC is held). Pre-screening activities included a costume contest and live red carpet interviews streamed on the large screen. Conan O'Brien, who has again at SDCC, served as emcee, commenting, "You’re about to see this film in the one way every filmmaker dreams of their films being shown—on a jumbotron, in an amphitheater, with planes flying overhead.” He introduced all the main cast members: Chris Pine, Zachary Quinto, Karl Urban, Zoe Saldana, Simon Pegg, John Cho, Idris Elba and Sofia Boutella who stepped onto the stage and in front of the orchestra. The men wore suits, except for Elba, who apologized saying his suit was lost at the airport as O'Brien noted his casual shirt and shorts. Composer MIchael Giacchino appeared before the crowd along with director Justin Lin and producer J.J. Abrams. Quinto noted that his first trip to SDCC was in 2007, when he met Nimoy and "bonded with him."

Because Rihanna's song, "Sledgehammer," is played during the credits and this evening's screening featured live music by the San Diego Symphony Orchestra, the video of Rihanna's song introduced the film. Then the orchestra played music from the original series as first lights provided magnificent clouds above the audiences heads, soon followed by a laser show with fireworks. You wonder why more music isn't made for fireworks. 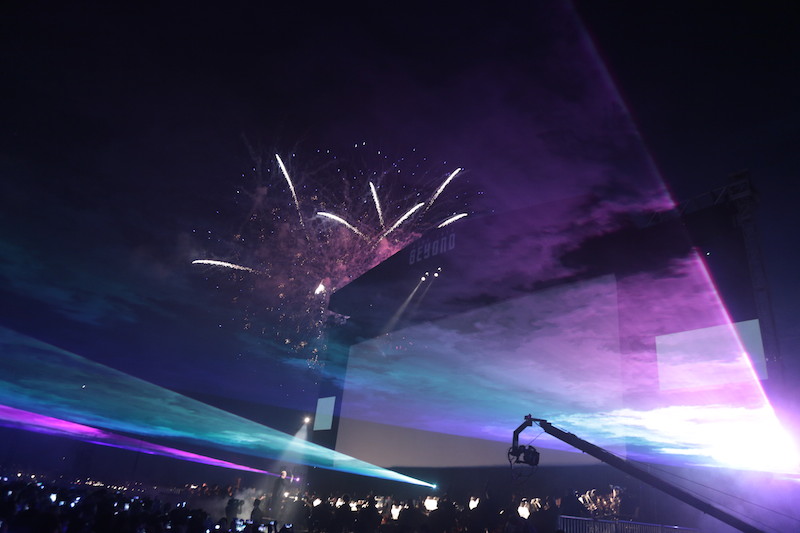 "Star Trek Beyond" is in one sense this Spock's (Quinto) search for himself as he faces mortality. In the reboot saga, Leonard Nimoy was the only one of the original cast who was invited to appear. He became Spock Prime, trapped due to circumstances in an alternative reality and advising the young Spock (Quinto), his version in this reality. Nimoy died before the filming of this movie and in "Star Trek Beyond," Spock learns that Spock Prime has died. Spock (Quinto) and Captain James T. Kirk (Pine) separately question their dedication to the Enterprise's five-year mission, both entering the current adventure as their last.

Kirk ponders, "It's hard to feel grounded when even the gravity is artificial." He's facing a birthday and contemplates his mortality, not unlike the original Kirk (William Shatner) in "Star Trek II: Wrath of Khan." He tells Bones that his father joined the starfleet because he believed in it, but "I joined it on a dare." Bones and he drink some liquor purloined from Chekov, toasting to a future with "perfect eyesight and a full head of hair."

Director Lin and his co-writers Simon Pegg and Doug Jung have provided fans with a movie that recalls some of the chemistry between Kirk, Spock and Bones in the original series. It is a fitting tribute to Nimoy and, in one ending poignant shot, shows that the franchise continues without a good friend. The movie is dedicated "In loving memory of Leonard Nimoy" and "For Anton," whose role will not be re-cast.