This year's Comic-Con International Independent Film Festival Documentary Award winner is about a Southern California native and an SDCC regular who became a Disney Legend in 2007. "Floyd Norman: An Animated Life" is a loving look at the first African American Disney animator.

I had previously met Norman during a special press presentation for the re-release of "101 Dalmatians." Now 81, Norman isn't one of the legendary Nine Old Men, Walt Disney Company's core animators, the last of whom, Ollie Johnston, died in 2008 at 95. Norman is a generation younger, a link between the Nine Old Men and the animators of today.

Norman has received various awards including the SDCC Inkpot Award (2008) and the Comic Art Professional Society's Sergio Award in 2013. He has also written books about being an animator.

Norman has been "like the Forrest Gump of animation." He loves Disney, although sometimes his interoffice cartoons—made to entertain his co-workers—were critical, and he was fired from Disney during his long career. Today, as the documentary shows, Disney dotes on him. He roams the Burbank Disney campus, bringing his second wife to work and sometimes dropping by when she's not even coming in. The studio arranged for Scarlett Johansson to videotape a Happy Birthday greeting to him in the sexiest Marilyn Monroe-style.

Directors Erik Sharkey and Michael Fiore have caught Norman's whimsical charm and his upbeat attitude. Animation is used to bridge and re-enact episodes of Norman's life and times at Disney as well as Hanna-Barbera Productions, particularly his experiences with Walt Disney. There are archival photos and film clips, of course, as well as interviews with his ex-wife (and mother of his five children), his adult kids, his current wife and his fellow cartoonists and partners.

Born in Santa Barbara, Norman remembers the seaside city as the perfect place for a shy artist. He began as an assistant to Bill Woggon on his "Katy Keene" comic books. He eventually ended up in Pasadena at the famous Art Center. From there, not knowing any better, he applied to work at Walt Disney Productions. The conventional wisdom was that Disney didn't hire blacks, but according to Norman, Disney saw talent and not race or religion. He was the first African-American long-term employee in the Disney animation department. 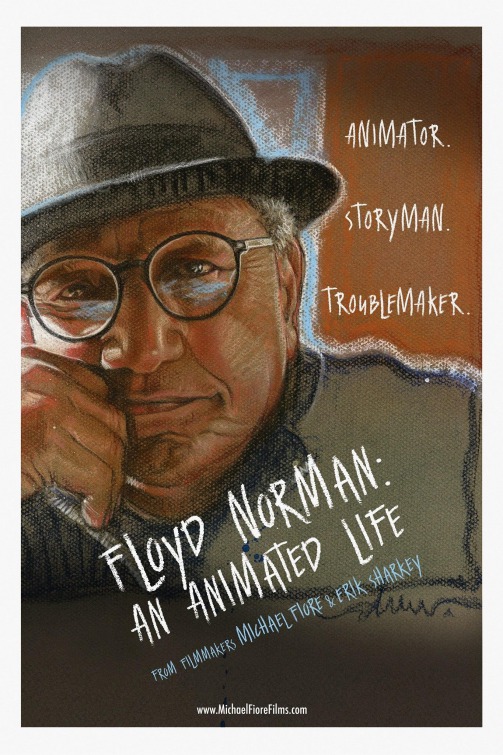 Although he worked on "Sleeping Beauty," his employment at Disney was interrupted when he was drafted. He returned in 1960 to work on the 1961  "101 Dalmatians" and the 1963 "The Sword in the Stone." He also worked on one of my favorites, "The Jungle Book." Richard M. Sherman, who with his late brother Robert B. Sherman, wrote the lyrics and music for that classic, appears in this documentary as well as critic Leonard Maltin and actor/comedian Whoopi Goldberg.

After Walt Disney's death, Norman left the studio, partnering with Leo Sullivan to form Vignette Films, Inc. Vignette was one of the first companies to produce films on black history. The company also produced segments for "Sesame Street" and the 1969 NBC animated special, "Hey, Hey, Hey, Hey, It's Fat Albert."

Norman sometimes scrambled to provide for his family of five kids, something that his children don't realize at the time. In the 1970s, Norman returned to Disney. He has since worked on "Toy Story 2," "Monsters, Inc.," "Mulan," and "The Hunchback of Notre Dame."

According to the film, even after retirement, he refuses to leave the Disney Studios. He's a familiar and beloved figure wandering the halls and spreading goodwill at the Disney Burbank studio. We also follow him to SDCC, and see him participating in the Quick Draw panel where he is one of three cartoonists competing to create cartoons on the spot, riffing off of audience suggestions. That's how SDCC started out—cartoonists and animators meeting their fans. That was before the major movie studios and TV networks moved in and SDCC grew into the big event it is today. At its heart, this documentary is about what Comic-Con was and strives to remain.

"Floyd Norman: An Animated Life" will open in New York City, Los Angeles, San Francisco and Orlando on August 26 for a one-week engagement. If a theater near you isn't screening this whimsical film, you can purchase the Blu-ray, which will include a documentary short, "Floyd and Leo," a round table conversation among animators, cartoonists and writers, "An Animated Lunch" and the theatrical trailer.