Cinematic Poetry: The Restoration of "The Apu Trilogy"

"The great, sad, gentle sweep of "The Apu Trilogy" remains in the mind of the moviegoer as a promise of what film can be. Standing above fashion, it creates a world so convincing that it becomes, for a time, another life we might have lived."

Roger Ebert wrote that about "The Apu Trilogy" when he inducted the films into his Great Movies pantheon in 2001, and we're reminded of this truth with the recent 4K restorations of Satyajit Ray's essential work. Few films are more beloved or more influential than "Pather Panchali", "Aparajito", and "The World of Apu", which have recently been lovingly, remarkably restored after a nitrate fire burned the originals over two decades ago. Now in theaters in New York City and soon making their way around the country, Ray's films have that remarkable ability to transcend time. They will always matter. They will always be important. They will always define what Roger spoke so eloquently about when he envisioned film as an empathy machine, a way to step into another person's life. Watching them again in 2015, Satyajit Ray's films simulataneously transport us to a world not directly like our own and do so with enough relatable human emotion that we see ourselves in it. It is not only another life we might have lived but a reflection of our own.

It was 1992 when the Academy of Motion Picture Arts and Sciences chose to give Ray a Lifetime Achievement Oscar. The producers of the telecast were dismayed at the poor quality of the available prints for the montage and set out to restore Ray's films. The next year, they shipped original negatives, including those of "The Apu Trilogy" to London. Tragedy struck when a nitrate fire spread from a lab to the vaults, burning a few dozen films, including Ray's. What remained was sent to the Academy Film Archive, but the prognosis was dire. They were deemed unsalvageable at the time and it really looked like we might lose "The Apu Trilogy" forever.

Well, technology improves. And, in 2013, the Criterion Collection began an exhaustive project with the Academy Film Archive, transporting the materials that remained to L'Immagine Ritrovata in Bologna. Working delicately with the damaged materials, technicians developed a special solution to rehydrate what they could, physically repairing the film over thousands of hours of careful work. Duplicate negatives from the Academy, the Harvard Film Archive, the British Film Institute, and Janus Films filled in any blanks left by frames that were burned to ash in '93. According to Janus, 40% of "Pather Panchali" and over 60% of "Aparajito" now consists of original negative.

The incredible effort can be seen right there on the screen (at the Film Forum in NYC for the next few weeks before coming to other markets and, one presumes, Blu-ray later this year). The films reveal almost no visual degradation. Occassionally, the picture will jump as if a few frames are missing, but it's hard to believe that these aren't remasters from original material through and through. 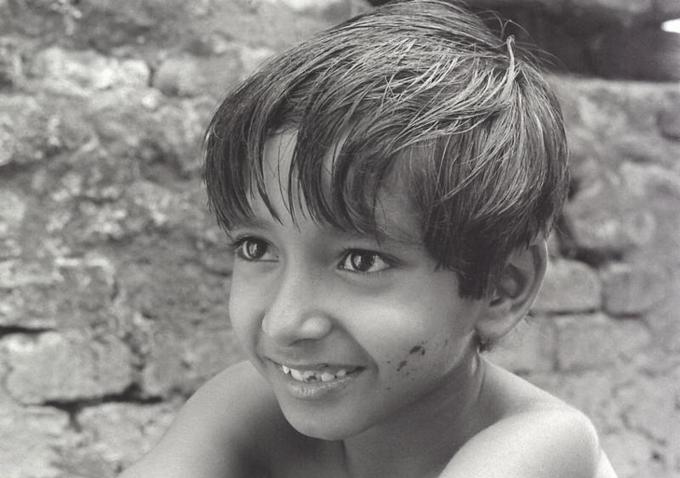 It's also impossible to watch "The Apu Trilogy" and not consider its place in film history. The Criterion Collection recently released Jean Renoir's "The River," a film that has an undeniable influence on Ray in that he met Renoir when it was filming in India. He also met Subrata Mitra, a production assistant of Renoir's, who would go on to shoot "The Apu Trilogy," conveying in Ray's films much of the cinematic river of life approach seen in Renoir's. And the list of films and filmmakers influenced by Ray's is too lengthy to even consider. Martin Scorsese once said about Ray, "Without a doubt, in his films the line between poetry and cinema, dissolved."

To say that Ray's cinematic poetry has "held up" would be a ridiculous understatement. Like Ozu's "Tokyo Story", there's a timeless quality to "Pather Panchali" that's mesmerizing. Without forced melodrama, Apu's family very quickly becomes ours. The primary forces that shape Apu's life are essential to humanity whether they be as primal as hunger or as coveted as the love of family. This is humanity. It will always matter. And Ray's ability to turn that human essence into art shouldn't be underrated. It's not just the themes of "The Apu Trilogy" but how they're conveyed. Just look at the choice of camera position in "Pather". Children like Apu and Durga are often shot from above, eyes upward at adults and the brave new world that fascinates them. Adults, especially those outside of the family, are shot from below, visually giving people like Sarbajaya the towering power of a matriarch.

Durga, one of the most endearing characters in the Apu films, is a little thief who grows up to be a mindful, solemnly beautiful young lady. Even when she isn't present onscreen, her spirit lingers across the three films in this saga of poor but loving family. There are echoes of her behavior, impish, sweet and compassionate, everywhere in the trilogy. She is the best in us, our loving and adventurous nature.

There isn't much new to say about a series that many consider like a loved one, except that they feel new each time—precisely the feeling of wonder and fluttering anticipation you feel when going to meet someone you adore. Apu, his sister Durga, his father Harihar and his mother Sarbajaya haven't aged a day, and the particulars of their story continue to yield astonishing surprises. 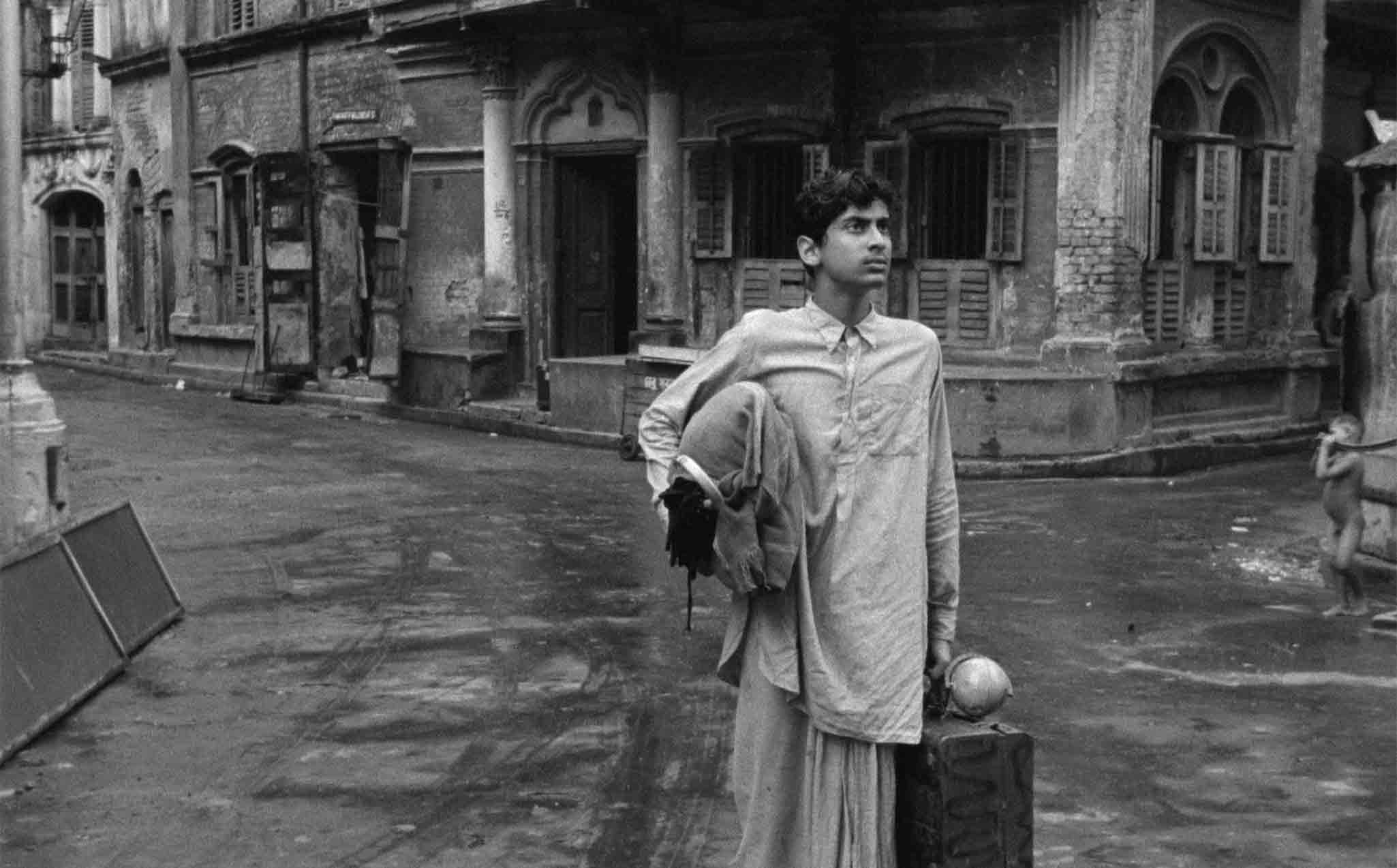 For example: A friend observed that these films are really all about Apu's mother. There's much evidence to support her claim. So many shots linger upon Sarbajaya mentally weighing the fate of her family against the demands of survival, making decisions that no one else considers but which save them from disaster for another day, at least. Ray records these sacrifices in appropriately reverential way that, this time around, made me think of the first shot of Xavier Dolan's "Mommy", in which the camera hovers over the title character, a widower raising a volatile son, as she basks in sunlight—an adoring, sanctifying gesture on the filmmaker's part.

This kind of courtly attention to poor, struggling characters can be devastatingly beautiful in a certain context. Here in America, the context is often one of shame and silence regarding the poor. Even in sympathy, the camera tends to glance condescendingly, offering up so little evidence of an individual. In "Pather Panchali," we learn very little about Sarbajaya's past or her dreams, but we get ample time and space to consider them, to see her as we might see our own mother, or ourselves. European and American films helped Ray figure how to convey these moments in an exciting way, but he refined the approach, arguably applying more patience and restraint (particularly in the lighting) than his heroes, Ford, Renoir, De Sica. As a result, it's hard to accept that Karuna Banerjee as Sarbajaya was not among the non-professional cast members but, in fact, a seasoned actress; that we are not watching, in some sense, a documentary. The same goes for the rest of the family. Ray's manner of passing time with them lets them settle in our thoughts as something more than characters. What they do and what happens to them registers with more force yet with less noise than that of a typical drama of the time—in any country.

When Harihar, a gentle and decent man of faith, appears out of a crowd of strangers in the beginning of "Aparajito," my heart leaps every time. My friend is back! What's he been up to? How has life been treating him since we last passed the time together? Ray knows that anyone who has watched "Pather Panchali" will patiently await the answers, a return on the investment.

Apu, of course, is with us for the duration. We attend his birth, his childhood, his coming of age and his unique but (emotionally) universal initiation into manhood. There is much silence and stillness along the way, but never a dull moment. The artfully mixed natural sounds and the music of Ravi Shankar are a river that Apu navigates. The boat is the camera that cinematographer Subrata Mita pilots. Dulal Dutta's editing sends it along the story's tributaries, channels and deltas with a flow modern filmmakers have simply forgotten. When we are left on the bank by the end of it and must let Apu sail on, there is no time for sadness. We walk away with a gift, a keepsake for a lifetime.