It was a century ago today that Danielle Darrieux was born, and it is just over 80 years ago that she first became a star of the French cinema in “Mayerling” (1936), a romance in which she starred opposite Charles Boyer. Darrieux had begun her film career as a teenager in a comedy called “Le bal” (1931), where she sang, and she was the female lead in Billy Wilder’s first feature as a director, the rapid-fire and scrappy “Mauvaise graine” (1934), which was shot mainly on the streets of Paris.

With her elongated pretty face and her large eyes, which she often widened semi-blankly for a very cute effect, Darrieux was so lovely in “Mayerling” that it was easy to see why Boyer’s Prince would give up his crown and his life for her. She made a trip to Hollywood for “The Rage of Paris” (1938), a minor but charming comedy in which Darrieux speaks English fluently and behaves like a playful, sensual kitten. By all rights that should have started a career for her in America, but she went back to France.

Darrieux’s work rate declined and then outright stopped during World War II and only picked up again once the Nazis were out of power. She had been married to the director Henri Decoin, but from 1942 to 1947 she was wed to the playboy Porfirio Rubirosa, a notorious Don Juan who favored women who were very rich or very beautiful or both. These were prime career years lost for Darrieux, but she made up for this after the war by steadily collaborating with Max Ophuls, for whom she made three major films.

In “La Ronde” (1950), Darrieux plays a married woman who meets a young man (Daniel Gélin) for an assignation, and her excitement as she enters his rooms is sexy and more than a little comic, for Darrieux always had a light touch as a performer. The closest American equivalents to Darrieux would be Myrna Loy or Claudette Colbert, sophisticated women who knew how to hold back and survey men with tenderness and amusement. She tells Gélin that she is trembling with “emotion,” but it is clear in the way that Darrieux plays this scene that she is really trembling with lust and nearly lightheaded with it. (This is a woman, after all, who held Porfirio Rubirosa’s attention for six years.)

There comes a moment in “La Ronde” when Gélin’s character is unable to perform sexually, and Darrieux just patiently waits as he tries to talk his way out of his embarrassment. She even manages to tease him a little before picking just the right moment to lean forward and check the time, at which point his ardor is fully aroused by the physical touch of her body. In Ophuls’s “Le Plaisir” (1952), Darrieux is a tart on a holiday in the country, a dreamer and a pouter with a beauty mark on her chin who finds herself weeping for her lost innocence when she and her fellow harlots visit a church. 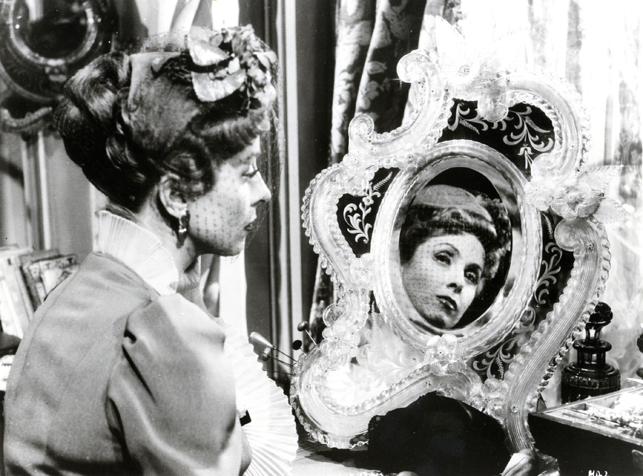 And then Darrieux was the centerpiece in one of the greatest films ever made, Ophuls’s tragic romance “The Earrings of Madame de…” (1953). She does a very funny walk in the opening scenes as she goes to sell the earrings that will keep coming back to her, moving forward breathlessly and with a sort of physical wobble that is close to Marilyn Monroe’s comically “feminine” gait. In most of her movies, Darrieux puts quotation marks around her own behavior to stylize it, and she does that in the first half of “Madame de…” before plunging herself headlong into the annihilating emotion of the second part of the film.

“Madame de…” is a movie that says that you can’t get by on charm forever, and if you lead a superficial life you might eventually be made to pay a price. When her pampered, materialistic character is opened up to love for Fabrizio Donati (Vittorio De Sica), Darrieux does not act the situation but seems to be actually feeling and living it herself; she reaches a height of emotion when she leans against a door and desperately and ironically says, “I don’t love you, I don’t love you” to Donati. This is a film in which Darrieux herself has to interrogate her own charm and set it aside for something far deeper and more perilous. She rises to the occasion, especially in the last scenes where she has succumbed to her love for Donati as if it were a physical illness and her face keeps falling into a romantically obsessed stare.

“The Earrings of Madame de…” was the height of Darrieux’s career, and the various literary adaptations she made after that, like a tame and unsexy movie of “Lady Chatterley’s Lover” (1955), did not do justice to her looks, spirit, or talent. But Jacques Demy rescued her for two films in which she sang: “The Young Girls of Rochefort” (1967), where she wistfully but pragmatically ran a French fry stand, and “Une chambre en ville” (1982), where she played a haughty, tippling widow in a mature, unsparing style that suggested Darrieux no longer cared just about being liked by her audience.

She played Catherine Deneuve’s mother in “Scene of the Crime” (1986), and then she was the matriarch in François Ozon’s musical “8 Women” (2002), in which she ended the film by singing a song about how “there is no happy love.” Darrieux is a lasting beauty of the French cinema and an icon of romance in the movies of both Ophuls and Demy. Above all, in “The Earrings of Madame de…” she had it in her to be the unfinished woman who is finished by love, and that will seal her cinematic immortality along with her very pleasing personal longevity.