She was very short, had serious, beautiful, sunken eyes, her voice was low and raspy and it flowed out of her like a thick current. It was winter 2013 and she was reading from her memoirs in a black box theatre in Chelsea, while her latest photography exhibit played on a loop upstairs. The story she told was of unbearable melancholy. A woman, in her 60s, trying to learn how to date online, and having her heart broken when the object of her affection refuses to be open with her, to write back. She was a titan, a queen, she had helped invent modern cinema without anyone helping her, and here she was, so small and fragile in front of an audience who couldn’t do her the kindness of staying to the end of her talk.

At least twenty people walked out of her talk, each footfall louder than the last.

Finally she looked to the last of the rude escapees, some 30 minutes into her talk, and said “Don’t make noise.”

She wasn’t angry. She was hurt. You could hear it in the way she dragged out the last vowels. Surely Chantal Akerman had earned her audience.

There is, unfortunately or not, a continuity to these events. At the Locarno film festival, her latest film "No Home Movie," was booed. At that same movie’s New York press screening, I counted six walkouts. It’s tragic in a way that Akerman’s art turned so many people away from her, but then…the best and most honest art will always confuse and upset those who aren’t ready for it. And I don’t believe there was a more honest or daring filmmaker of the last 50 years.

Chantal Akerman was born in Brussels to a mother who had survived Auschwitz (this great woman was the subject of many of her best work, including "No Home Movie"). She saw Jean-Luc Godard’s "Pierrot Le Fou" when she was 15, and it changed her life. She dropped out of film school after a short while (her fans would find it hard to imagine her sitting in class listening to someone else’s idea about how films should be made) and started shooting intense personal hybrids of fiction and non-fiction, frequently choosing herself as subject.

She moved to New York in the early 1970s and produced "Hotel Monterey," a silent rumination on the corridors of the rundown building and the people who passed through it. The film is a series of mostly static takes that force you to confront not just the content of the image, but the context, the very idea of a moving image itself. This was her gift. Akerman changed the way an audience relates to moving pictures by asking every member to consider what they would expect from a film. If you’re angry or upset that nothing is happening, ask why you believe that something should? Is film not a visual medium? Is an artist not meant to relay secret truths that only they seem able to divine? What do we value from the experience of sitting in the dark and communing with 35mm film running through a projector? And, more to the point, who is behind the camera?

She returned to Europe after the completion of a few short films ("Le 15/8" and "Hanging Out Yonkers") armed with a revolutionary idea named Jeanne Dielman. Her breakthrough feature is three hours and twenty minutes long, consists of long tableaux of a woman, played by that beautiful wraith of the arthouse Delphine Seyreig, cooking, drinking, walking and making love with a series of men who are not her husband.

At the end of "Jeanne Dielman, 23 quai du Commerce, 1080 Bruxelles," there is finally a burst of action that changes every minute of the movie that precedes it. It was one of the great formalist gambits of the 1970s, and it felt like the first time a woman was filming what it felt like to be a woman. The agony of being in thrall to a male society that had only so many spaces allotted for you to discover yourself. There had been experimental filmmakers before, and many of them had asked you to stare unblinking at ordinary things until you understood something new about what film could do to the human mind, but this was different.

Chantal Akerman was forcing men to look at a woman who could have been any of their wives or mothers, for over three hours. To reckon with female identity and existence, that it is intrinsically, starkly different from the male, and that so much of modern female life is a miasmic routine. She poured cold water on the male gaze. And she did all this before her twenty-fifth birthday.

As so frequently happens with artists who are ahead of the game, the world didn’t really know what to do with her. She became a familiar figure at festivals and was paid many tributes over the years. But for someone who changed the DNA of art films forever, she isn’t taught in film or feminist theory classes (or anyway, I took both in two different colleges and didn’t hear her name once).

As with Orson Welles, as she experimented and got a better grip on her aesthetic identity, she was allowed to drift from the center of our attention. She made a documentary on the celebrated dancer Pina Bausch in the 80s, and a few very charming mainstream comedies with "A Couch in New York" and "Tomorrow We Move," but you wouldn’t know that from a cursory glance at her reputation. Curators failed to keep her legacy in the air between films. When her 2011 film "Almayer’s Folly" (a staggering movie) took a year to make it to a rather negligible art house run, I wondered if she’d done something to make taste-makers mad. Yes and no. She was just herself, and being Chantal Akerman meant asking the world to reckon with its false identities and overcome a relentlessly awful history.

After "Jeanne Dielman", she would make three more masterpieces before the decade was over. The first is "Je, Tu, Il, Elle," on which more in a moment. The next two were autobiographical inverses. "News from Home" is a trance-like documentary that features Akerman reading letters from her mother over footage of her adopted home - New York City. It gives a window into Akerman’s lifelong inherited anxiety, and the ways in which her work was a tribute to the woman who so cared for her, who sent her money to help support her young daughter, making art she probably didn’t understand. Her love for her mother is in everything she did. She was Akerman’s first role model and her window into the beauty and warmth of womanhood.

It’s fitting, if sad, that her final film would be about her final months with her ailing mother. "News From Home" only provides a glimpse into what Akerman had left behind and what she saw as she read these heartbreaking missives from her past life, but didn’t give much indication what Akerman herself was going through.

For that, look to "Les rendez-vous d'Anna." Gossamer Aurore Clement plays an Akerman stand-in, a director on a lonely, nocturnal tour of major cities with her latest work. Clement’s Anna is the flip side of steely Jeanne Dielman, a woman whose doubts escape through cracks in her expression. Akerman’s velvety dolly shots place somnambulant Clement in an earth-toned dystopia she has no control over. Opportunities, chances to prove her worth in front of appreciative crowds of intellectuals, come to look like a never-ending walk towards a firing squad. Akerman could find the raw essence of the female experience, but in "Les rendez-vous d'Anna," she showed that in reality, she still had to deal with the unceasing judgment of those who thought they could decide whether or not she was an artist.

When I first discovered Akerman, I living in a cramped Boston apartment whose ceiling slanted ominously inward where the roof came to a point. I was in film school and just wanted to direct, but all I had proved able to do was drink coffee and watch movies, and none of my instructors seemed in a hurry to let me make features on their time. And then I watched a grimy pirated copy of "Je, Tu, Il, Elle" in my frigid little room and it was like someone took off a blindfold I’d been wearing all my life. It was the first film she made after "Jeanne Dielman" and a refinement of that film’s ideas. Akerman is the film’s star, and she plays a woman who sits in her tiny room, goes out for a dalliance with a trucker and returns to make love to an old girlfriend. It’s shot in high-contrast black and white. Akerman films herself like the subject of a Gustave Courbet painting, resplendent curves and pale flesh intersecting the harsh dark interiors in which she’s trapped. The film treats female bodies like vessels that cannot hold all of the radiant female mind and its innumerable intricacies. Akerman’s cinema was essentially humane, but filled with a potent and necessary rage. She was creating a space for femininity, something still tenuous in art house cinema, to express itself—or at the very least realize that the space it in which it had been confined was not an inescapable one. "Je, Tu, Il, Elle" showed me that a camera and a body could produce truths that eluded artists with ten times Akerman's resources.

I started directing weeks after seeing this movie, and I dedicated my second movie (which has 8 shots and lasts almost an hour and a half) to her. She gave me the gift of cinema, led me to my voice. When you want nothing more than to be a better version of yourself, and someone suddenly hands you the ability to do that, you feel an exuberant debt of gratitude, one you can’t wait to repay.

That’s what drew me to her memoir reading that night in 2013. I wanted to be near her, to thank her in some way for having given me the tools to discover myself and become an artist. I sat there and listened to every word while people all around me walked away. I suppose in the end that’s all you can do for your heroes. You can sit and experience every second of the work they’ve created, because they’re creating for you whether they know it or not. You feel as if you understand each other.

For those of us who needed her, Akerman kept the world spinning on its axis, even though she hadn’t had what you’d call a "hit" since the 1970s. She never made a bad movie.

When the show ended I went up to her and told her how much she meant to me, how her films had made me a director. She just stared at me, like she was frustrated that her work had meant so much to me but couldn’t bring her that same joy. Her loss is a hole in my heart. I miss her so much. 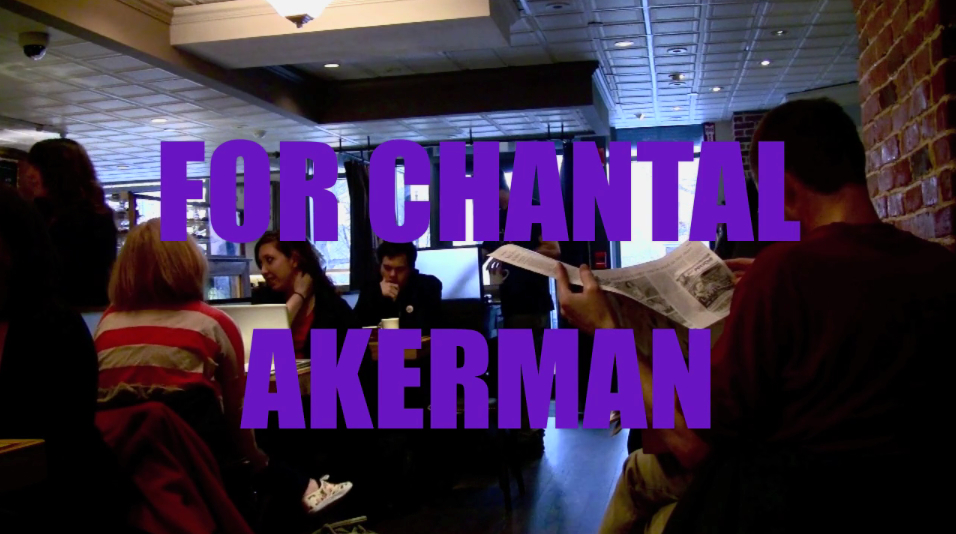