Peter Sobczynski June 27, 2013
Tweet
Jean-Luc Godard has been directing films for well over half a century at this point but for anyone wanting to explore his long and varied filmography in depth, especially if they are based in America, it often feels as if his career more or less ended in 1967 with the release of "Weekend," that deck-clearing orgy of literal and metaphorical chaos that famously ended with the declaration "END OF CINEMA." The results of the initial burst of filmmaking that began in 1960 with the game-changer "Breathless" and include such influential favorites as "Vivre Sa Vie," "
Advertisement
Contempt," and "Pierrot Le Fou" have been duly enshrined as classics and are readily available on DVD and Blu-ray, most of them in lovingly restored and lavishly appointed special editions from the good folks at Criterion, and belong on the shelves of all serious film students.

But as for the numerous films, shorts and videos that he has made since then, ranging from the radical and heavily ideological films inspired by the aftermath of the Paris youth revolts of 1968 that he produced until the mid-1970's, to the tentative embrace of conventional storytelling (albeit on his own particular terms) through the early 1990's, to the deeply personal essay-style format, in which world and cinematic history are often juxtaposed or at odds, that he has been experimenting with ever since, the story has been significantly different. Due to changes in audience tastes and the general drop in foreign film releases in the United States, his post-1968 works become an increasingly rare sight even on the art house circuit. Even if some brave souls were curious enough to want to check out a few of these titles when they hit home video (never the best place to experience Godard's experimental use of audio and video), they were oftentimes out of luck because many of the these titles received little to no distribution through those channels either.

Over the last couple of years, the St. Charles, Illinois–based distribution company Olive Films has been making an effort to redress this injustice by making some of Godard's more hard-to-find titles available at last to the American market on DVD and Blu-ray. This week, the company has released two more Godard obscurities, 1976's "Comment Ca Va" and 1987's "Soigne ta Droite" (known in the U.S. as "Keep Your Right Up") and while these films may not have the immediate impact of his better-known works, they both reveal a filmmaker who, rather than resting on his well-earned laurels, has instead chosen to spend his career challenging himself, his viewers and the very medium of cinema itself in ways that are oftentimes fascinating and frustrating in equal measure.

Made directly in the wake of "Numero Deux," his 1975 return to narrative filmmaking, "Comment Ca Va" takes place within the offices of a radical French newspaper not unlike the real "Liberation." It follows the efforts of its editor (Michel Marot) and a largely unseen stenographer (Anne-Marie Mieville, who co-directed the film with Godard — an early entry in a partnership that continues to this day) to make a documentary following the paper's production process. For the editor, the project is meant to be as straightforward as possible with the end result essentially serving as one big commercial for the paper.
Advertisement
The stenographer, on the other hand, is not as willing to just go along for the ride, and she interrupts the proceedings to inquire about how the press — even in a form as ostensibly radical as this — goes about presenting a story and how their particular combination of text and image can "explain" a story to such a degree that it is the narrative that takes hold in the mind of the reader, regardless of whether it is what actually happened or not. Eventually, this discussion expands to encompass the very cinematic processes that the editor is just taking for granted in the course of making the documentary. Why cut a scene at one particular place instead of another? Why juxtapose this particular image with that particular piece of music or narration? Can the written word, no matter how artfully deployed, truly be used to inform the image or does doing so skew things so completely as to make the entire process irrelevant? 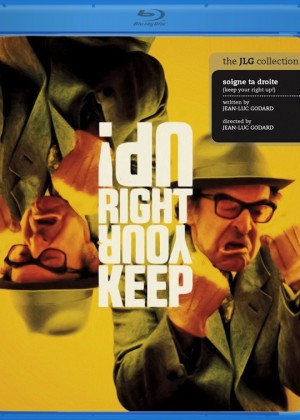 "Keep Your Right Up," like many of Godard's films, is filled with musings on, among other things, life, death, the human condition and, of course, the cinema. The difference here is that this time around he is exploring them through, of all things, an oftentimes comedic framework. In the film, Godard himself appears onscreen (as he did with increasing frequency during this creative period) as a character known largely as The Idiot (and yes, the reference to Dostoevsky is intentional), a filmmaker who is offered the chance to be forgiven for all his past sins if he can create, produce and release an entire feature film from scratch in only 24 hours.

While he is busy trying to come up with ideas and financing, the film also looks in on real-life French techno-pop duo Les Rita Mitsouko rehearsing a new song (as Godard famously did when he filmed the Rolling Stones in the studio during the recording of "Sympathy for the Devil" for his documentary "One By One") and on a lonely man known as "The Individual" (Jacques Villeret) who contemplates the meaning of it all, dreams of dancing with a naked woman who may not actually exist and is eventually placed under arrest. Along the way, there are numerous cameos from European movie stars of the time (with Jane Birkin being the most recognizable to current audiences) and references to literary and cinematic icons ranging from Goethe and Andre Malraux to Jacques Tati and Jerry Lewis.

The discussions that "Comment Ca Va" inspires — involving, for example, the presentation of images and ideas and the responsibilities of those doing the presenting — are just as timely today as they were in 1976, perhaps even more so with the increased number of instant documentaries and other news sources that, thanks to modern technology, allow people to transmit ideas that can influence opinions and solidify perceptions without giving a second thought to the ways in which they are bending and shaping the stories that they are telling. At the same time, the film now takes on a strangely nostalgic tone as it deals with two time-honored methods of conveying information — a newspaper and a camera recording images on films at 32 frames per second — that were incredibly important and useful back then and which are now largely irrelevant today, a fate that Godard himself would not have had the nerve to foresee.

"Keep Your Right Up," on the other hand, is a somewhat dicier prospect. Even granting the admittedly offhand nature of some of his films from this period, this one is particularly scattershot and actually feels like the kind of project that might result from the challenge of creating an entire feature in 24 hours. At the same time, it is interesting to see Godard working in a somewhat lighter and friskier manner than usual and he even shows a surprising affinity for physical humor at times. The highpoint of the film is probably an extended sequence set on a plane filled with oddball passengers and crew members doing various bits of wackiness — while Godard cited scenes from two Jerry Lewis films, "The Family Jewels" (1965) and the little-seen "Smorgasbord" (1983) as the influences for this element, contemporary viewers may find some intriguing parallels between it and the goings-on in Pedro Almodovar's new and relatively unsuccessful stab at wacky plane-based allegory "I'm So Excited." As for the rest, let it be said that comedian Villeret is occasionally quite touching in his scenes and that I have seen the Rolling Stones and, whatever their qualities, Les Rita Mitsouko are no Rolling Stones.

In the end, these two films are dense and complex works that are about as far removed from the concerns of commercial cinema as one can imagine. If you have never seen a film from Jean-Luc Godard before, these are not the best entry points by a long shot. However, for those with some working knowledge of the man and his output, these two DVDs, even with the lack of any special features of note, will help fill in some of the holes in his filmography and reveal a filmmaker continually hellbent on examining and reevaluating the art of cinema and what it can achieve. Besides, if enough interest is generated by these titles, it might inspire Olive or some other brave label to issue that crazy-go-nuts take on "King Lear" and believe me, that would be a cause for celebration.