Buddy Hackett: Up at drama, down at comedy. 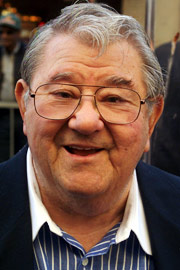 "There was a Vegas casino that offered me twice what I was making," Buddy Hackett was explaining to me one day. "I went to look at their show room, and I said I could never work there. The money didn't matter, because in that room I would never get a laugh."

Why was that? I asked.

"Because the stage was above the eyeline of the audience. You had to look up to see the act. It was great for sight-lines but lousy for comedy, because you can never laugh at anybody you're looking up at. A comic, you have to be looking down at him. My favorite rooms, the audience is above the stage, stadium-style."

What's the logic behind that?

"You look up at drama, down at comedy. A singer, looking up is okay. A comic, it's death."

So when you go to the movies, I said, should you sit in the balcony for a comedy and on the main floor for a drama?

This was one of many conversations we had in the mid-1990s, when we both found ourselves installed simultaneously at the Pritikin Longevity Center, which at that time was on the beach at Santa Monica. Hackett, a great comedian who died this week at 78, was engaged in a lifelong struggle with weight and cholesterol, although once he had me feel his calf muscles: "Hard as steel! I'm a great skier."

Hackett lived nearby, but checked into Pritikin to isolate himself from life's temptations. Other regulars were Rodney Dangerfield and Mel Brooks, who ate at Pritikin twice a week with his wife, Anna Bancroft. At lunch, Hackett would preside over a table of his guests, other comics, including George Gobel, Jan Murray and Soupy Sales.

Once a woman approached the table and said she had a joke she wanted to tell.

"Lady," said Hackett, "go tell your joke at a table where amateurs are sitting. We're professionals here. We got all the jokes we can handle."

One night Buddy brought over a tape of "Bud and Lou" (1978), a movie where he played comedian Lou Costello. He felt he'd done good work in a less than great film, and wanted his Pritikin friends to see it. Hackett's Costello comes across, as many comics do in private life, as a lonely and sad man, and I felt Hackett did a good job of portraying that--even though I never sensed gloom in his own makeup.

Hackett said he once thought he was on the edge of a great movie role. Martin Scorsese called him up and said he wanted to come over and talk to him about working in "GoodFellas."

"He comes over to the house," Buddy says, "and he tells me the scene. Ray Liotta is walking into the nightclub and the waiters seat him, and I'm on stage doing my act. So I ask, what do you want me to say? Where's the script? And Scorsese says there isn't any script. I'll just be in the background telling part of a joke. PART of a joke? "

"I stood up and walked over to the window. I invited Scorsese to stand next to me. 'Isn't that a beautiful lawn?' I said. He agreed that it was one of the most beautiful lawns he had ever seen.

"Take a real good look," I told him, "because you will never be back in this house again. Part of a joke! Get the fuck outta here!"

One day I told Buddy a true story. It took place in 1979, I said. Jack Lemmon came to Chicago to promote "The China Syndrome." He told Gene Siskel and myself he wanted to relax, and suggested we go to the Gaslight Club, where he heard there was good jazz.

Four women at another table were celebrating a birthday. They looked at our table and giggled, and finally one of them approached our table with a menu. "Here comes the autograph request," Lennon said.

"Mr. Siskel," the woman said, "I enjoy your reviews so much! Would you autograph my menu?"

Gene agreed with a smile.

"You've made my day," the woman said.

"In that case," Gene said, "your day isn't over. Did you notice who I am sitting with?"

The woman looked over.

"Ohmigod! Jack Lemmon! Oh, Mr. Lemmon, you are my favorite actor. I didn't expect to see you here! Would you sign my menu?"

Lemmon agreed. Then Gene said, "And your day still isn't over. Look who's sitting right here!" The woman looked at me, and her face broke into a delighted smile.

After I told this story to Buddy, he nodded thoughtfully.

✔ Directory of recent entries in my blog, Roger Ebert's Journal.

✔ The home page of my Web Site.