Editor's Note: When "Showgirls" first came out in 1995, it was dismissed as trash and mocked as high-budget Hollywood softcore. Roger wrote "The screenplay is the fevered product of a very limited imagination, brought to a high gloss in a slick, expensive soap opera." The film went on to an afterlife as camp, shown for ironic consumption by audiences who went to revel in its badness, often while drinking. It's high time someone gave this film another look. And that's precisely what Adam Nayman, a film critic who has written for the Village Voice, L.A. Weekly, Film Comment, Cineaste and other outlets, has done. His new book "It Doesn't Suck: Showgirls", published by ECW Press, is an entertaining but also intelligent look at the movie with fresh eyes. The book will be released tomorrow, April 1st (No word on whether that timing was deliberate…). The following excerpt looks at the opening of the film.

Nomi Malone isn't the first shady lady to set out for Sin City: in 1952's "The Las Vegas Story, a blowsy ex-lounge singer played by Jane Russell gets dragged back to the Nevadan hotspot by new husband Vincent Price only to encounter a beefy ex-flame (Victor Mature). Laid out end to end, the titles of the films set in the Nevadan hotspot tell a florid story of love gone wrong: "Meet Me in Las Vegas (1956), "Honeymoon in Vegas (1992), "Fear and Loathing in Las Vegas (1998), "Leaving Las Vegas (1995). A city of midnight runs and indecent proposals, the primo destination for those looking to get Lost in America — from the road-tripping Griswold clan to the overgrown frat boys of "The Hangover (2009) — Las Vegas has been one of the most frequently filmed cities in the history of American movies, and like Los Angeles, its geography is such that it can only play itself. Nobody is going to mistake a shot of the Strip for anywhere else. And yet Las Vegas is a city with a split personality. It's paradise for the winners and purgatory for everyone else. It's the opposite of the Hotel California: you can leave any time you like, but only after you've made the check out.

The first image of Las Vegas in "Showgirls" is rather uninspiring. Over Jeff's shoulder, we see a line of blinking towers, their light-up signs just far enough away that we can't quite make out the words. "Do you gamble?" Jeff asks Nomi, flashing that good old-boy grin. When she answers in the negative, he tells her, "You've gotta gamble if you're going to win." "I'm going to win," she says, but the remark seems directed inward, as if she's trying to convince herself more than her chauffeur. The truck cruises lazily in to the Riviera casino's parking lot, in effect returning Nomi to the same sort of empty, liminal space that she started from — an indicator, perhaps, that on this journey she will be fated to keep returning to square one.

En route to Las Vegas, Nomi seemed naïve about her prospects, but her wariness was an effective defense mechanism. Now that she's actually made it there, she drops her guard enough that even a transparent huckster like Jeff can get the better of her. He convinces Nomi to leave her suitcase in the car while he fetches his uncle, whom he claims has job connections at the casino. "Ain't anybody ever been nice to you?" he asks, knowing full well that the answer is no and that he's not about to be the first.

In "Showgirls: Portrait of a Film," Paul Verhoeven writes that he and his cinematographer Jost Vacano were aiming for a "very free, fluid look," which entailed the use of the Steadicam, a stabilizing camera mount that isolates the camera from the movement of the operator. An invention of the American cinematographer Garrett Brown, the Steadicam came into vogue in the late 1970s, as it allowed directors to choreograph elaborate tracking shots that could glide through sets and locations without betraying any of the bumpiness or shakiness of traditional handheld camerawork. In "The Shining", Stanley Kubrick exploited the Steadicam's visual possibilities to the fullest, prowling through the corridors of the haunted Overlook Hotel with the eerie serenity of a floating ghost.

The Steadicam is first used in "Showgirls" when Nomi and Jeff go into the Riviera and he leaves her to wander the slot machines, handing her a ten-dollar bill for walking-around money, which she snatches from him like a mongoose trying to kill a cobra. The shot isn't as spectacular as the signature sequence of Martin Scorsese's "Goodfellas" (1990), which descends into the bowels of a New Jersey nightclub in a single fluid take, but it does give us enough time to drink in the setting and to register that the actors are not on a movie set. Verhoeven believes that the Steadicam can impart a documentary quality to a fictional film: "On the screen, it appears as though the camera is following the actors, as it might do in cinéma verité … basically, you never see the camera moving without being motivated by an actor, but I have choreographed the actor so that the camera can find a new angle." 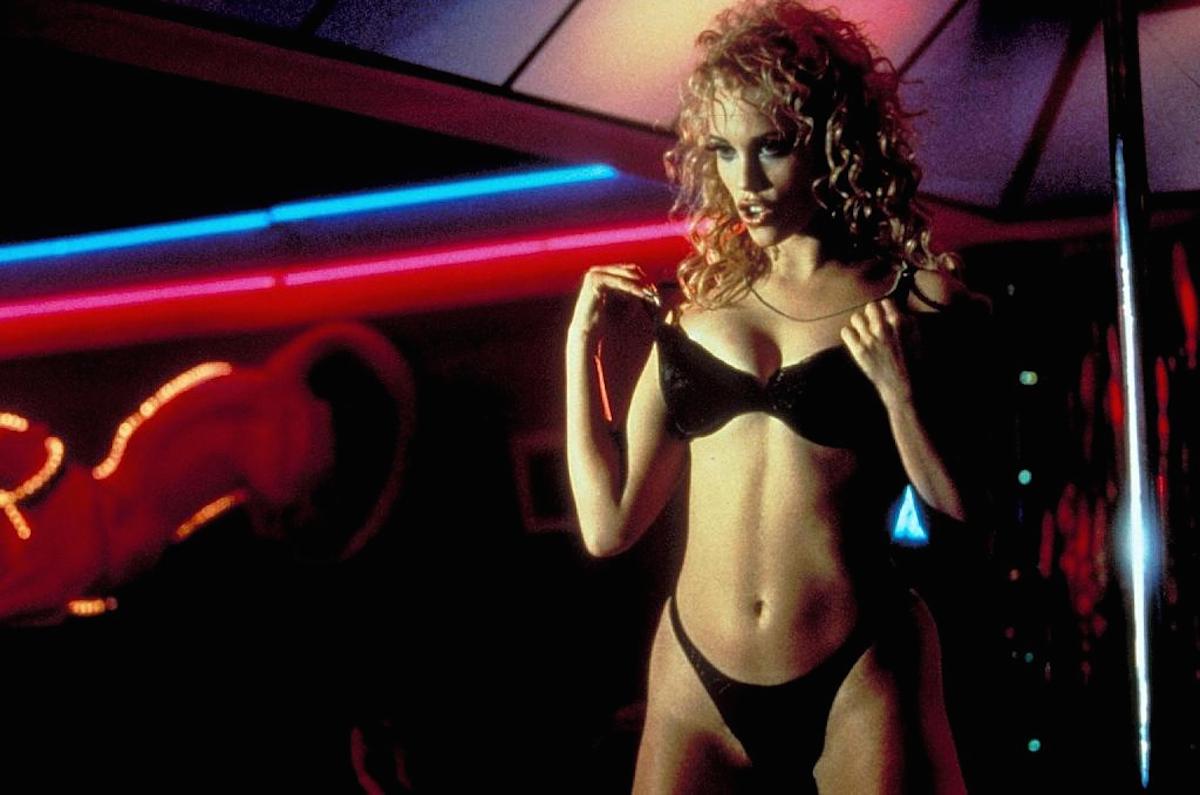 Even if we don't accept Verhoeven's aspirations to "realism" here, we can still see a clear attempt on behalf of the director to undermine the fantasy of Las Vegas that they (and Nomi) have to this point been building up. Like any rude awakening, this jolt is presaged by an almost dreamlike serenity, as Nomi pulls the lever on the first slot machine and is rewarded with a steady stream of coins. But she doesn't quit while she's ahead, and in the space between two cuts, she's back down to zero — and also to the violent, impulsive gestures of her initial appearance, as she punches the machine in rage and frustration.
Advertisement

Like a shark sniffing blood in the water, a man cruises by and propositions Nomi, telling her that he has some ideas about how she can make her money back. "Sooner or later, you're going to have to sell it," he calls as she strides away, seething. Losing the money was a wake-up call for Nomi that nothing in Las Vegas is going to be as easy as it seems, that the town's M.O. is to give you little glimpses of victory before snatching them away. We won't know just how deeply Nomi is stung by the catcaller's insinuation until much later in the movie, but we've definitely seen enough, even in this one brief encounter, to validate Jacques Rivette's claims that "Showgirls" is "about surviving in a world populated by assholes" — not only this guy, with his slick haircut and shirt unbuttoned to reveal a cheap gold chain, but also Jeff, who has swiftly and predictably made off with Nomi's suitcase for the low price of ten bucks.

Running out to the parking lot, Nomi realizes she's been had. With no slot machine around to punch, she starts thrashing the hood of a nearby car, which prompts its owner, Molly (Gina Ravera), to rush over and stop her. She grabs Nomi, who breaks away and vomits on the ground, and then nearly gets creamed lurching out into the middle of the road. Spent and broke, Nomi falls into Molly's arms and begins weeping uncontrollably. 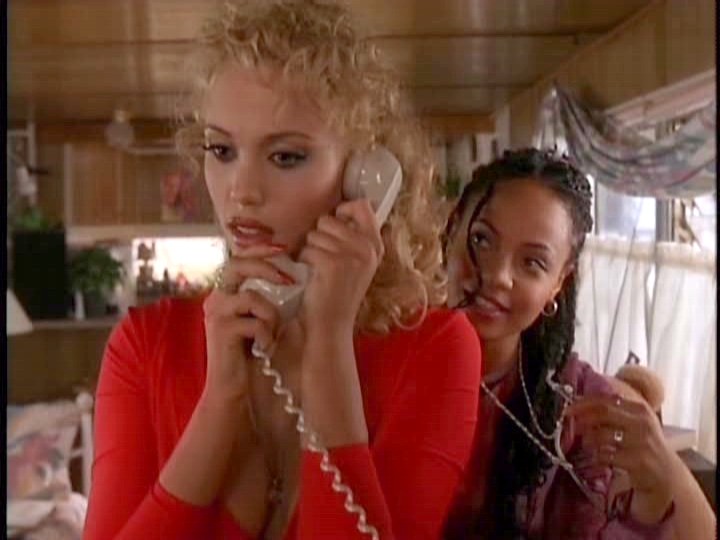 Molly, as it turns out, is the answer to Jeff's question about whether anyone's ever been nice to Nomi. In the very next scene, she sits her down at a fast food restaurant and treats her to some French fries and a soft drink. Nomi is still agitated, however: she files her nails like she's power-sanding a porch swing and stabs a straw into the top of her drink as if to draw blood. She can't even pour ketchup on her food without sending the stuff flying into the air like a squib exploding in "RoboCop." She doesn't want to answer Molly's questions about her past, or her family, or where she's from. But the other woman has a soft, calming presence, and she surprises Nomi by asking her if she'd like to crash at her place for a few days. "Are you hitting on me?" asks Nomi, smiling as if to indicate that this wouldn't be the worst thing in the world. "No," says Molly just as coyly, wrapping her lips around her own straw and taking a pull off her Coke.

"Is she hitting on her? The Molly-Nomi pairing is, if not the most important relationship in "Showgirls," then certainly the most tender. Molly remains a steadfast friend throughout the story, and in the end she's the one person who Nomi proves (literally) willing to fight for. Their ensuing trailer park cohabitation, while not explicitly sexual, is undoubtedly cozy: Molly isn't shy about dressing and undressing in front of her new roommate, and Nomi looks pretty comfortable leaning across Molly's body to grab the television remote.

"When the filmmakers imagine domestic life between Nomi and Molly," wrote Janet Maslin in the New York Times, they see chicks in lingerie who giggle, clutch stuffed animals, fuss about manicures, and say 'What am I going to wear?' and 'Who ate the chips?'"[1] Maslin is not wrong about the sneakily prurient vibe of the trailer-park scenes, although she misses the genuine affection between the characters, feelings that rarely permeate any of the movie's other interactions. Nomi and Molly aren't in love, but they seem to love each other; and in a movie that is in all other respects violently allergic to subtlety of any kind, the affectionate ambiguity of their relationship definitely stands out.