Editor's note: In the new book "Crab Monsters, Teenage Cavemen, and Candy Stripe Nurses," Chris Nashawaty tells the story of the amazing life and career of Roger Corman through a collection of interviews, which Nashawaty has put together into an incredible blow-by-blow collage account (published by Abrams Books).

In this excerpt, Corman, Peter Bogdanovich, Bruce Dern, Diane Ladd, Peter Fonda and others recount the making of "The Wild Angels."

ROGER CORMAN: "As the Poe pictures went on, I felt like I was starting to repeat myself. It was time to move on. AIP wanted me to do more, and I said no, I want to do something in the streets and something contemporary. I suggested the Hells Angels, and they agreed. I hung out with the Angels at some of their parties. They were pretty wild. I only felt out of place once. Chuck Griffith and I brought marijuana to the parties, so we were always welcome. You know, you walk into some party and you look around and you see the best-looking girl, and you go over and start talking to her. Which I did. And Chuck came over to me at this one party and took me aside and said, 'That girl you're talking to is the old lady of the president of the Hells Angels, and he's not too happy!' You've never seen anybody walk away from a girl as fast as I did! I never said another word to her! We based the whole script of The Wild Angels on things they told us—even though I think they embellished some of their stories."

DICK MILLER: "Roger somehow had a sixth sense. I don't know if it was all his own, or if he was getting inside information from somewhere. He just seemed to know what the pulse of the country was, and he pounced on it."

FRANK MARSHALL (producer; post-Corman credits include Raiders of the Lost Ark, Poltergeist, and Back to the Future): "My dad was in the music business as a composer and a guitar player, and he knew John Ford very well. I was invited to one of John Ford's Christmas parties, and his whole stock company was there: John Wayne, Ward Bond, Harry Carey Jr. It was fantastic. There was this twenty-seven-year-old guy named Peter Bogdanovich sort of holding court in the middle of the room. I went over and met him, and we started talking. He said he was a film critic for Esquire magazine. He knew more than there was to know about movies. He knew he wanted to be a director. And he was excited because this fellow named Roger Corman, who I had never heard of, was giving him a chance to direct second unit on a movie called The Wild Angels. I told him if he needed any volunteers to give me a call."

PETER BOGDANOVICH (director; post-Corman credits include The Last Picture Show, Paper Moon, and What's Up, Doc?): "I wasn't a particular fan of Roger's movies. I don't like horror movies. Some of the Poe films were elegantly done, but I wasn't an expert on Roger Corman. In the middle of 1964, my wife Polly Platt and I drove across the country and moved to Los Angeles. One night, we went to see a movie—Jacques Demy's Bay of Angels—and Roger and Robert Towne were sitting behind us. Roger told me that he had read my stuff in Esquire and asked if I would be interested in writing for the movies. Not long after, he asked me to write a script for a big adventure picture set in Poland—like The Bridge on the River Kwai, but cheap. I guess he had made some sort of deal in Poland. He rejected all of my and Polly's ideas. Then he told me he was preparing to shoot a movie called The Wild Angels and asked me to scout locations with him. After that, he offered me $300 to rewrite the script for him. Well, I guess he was happy with it because he then asked me to be his assistant on the picture."

BRUCE DERN (actor; post-Corman credits include Silent Running, Family Plot, and Big Love): "I first met Roger in 1966. Just on an interview. My agent said, 'Roger Corman wants to see you.' And I didn't know much about Roger Corman. I wasn't a big Cormanite or anything. I was just struggling to make a living. I went in and met him, and he told me that he remembered seeing me in a play on Broadway, The Shadow of a Gunman, in October of 1958, which was my first Broadway play. I was on stage fifty-two fucking seconds, so I have no idea how he remembered me! Anyway, that was for The Wild Angels. My wife at the time was Diane Ladd, who's Laura's mother. She was out in the car or something, and I said, 'You know, my wife's an actress,' and she came in. He put us both in the movie."

DIANE LADD (actress; post-Corman credits include Chinatown and Wild at Heart): "When I went in, Roger said, 'You're too young to be married to Bruce Dern.' He gave me the part of the biker girl, Gaysh. It was my first movie. One day, Roger had us all ride really fast on motorcycles on a dirt road, which was very dangerous. In the industry, stunts like that are called 'special business.' And I didn't get paid extra for that. When my check came, I said, 'Wait a minute, where's my special-business money?' And Bruce said, 'Oh, he's not going to pay you special business.' I said, 'I risked my life, what do you mean?' So when the movie was over, I filed a lawsuit against Roger at the Guild. Bruce said, 'If you file that, you will never work for him again.' I said, 'Let me tell you something. Roger Corman is a man who respects people who stand up for their rights, and he respects money. And he will only respect me for this.' Bruce said, 'You're out of your mind.' But I did it, and Roger laughed like hell and paid me." 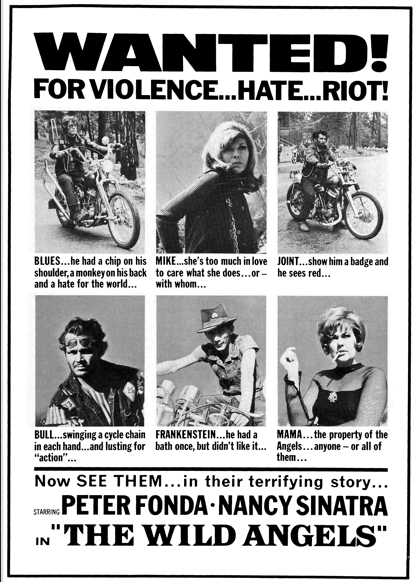 PETER FONDA (actor; post-Corman credits include Easy Rider and Ulee's Gold): "When Roger first said he wanted to make a movie about the Hells Angels, he said he didn't want to make a statement with it. And I thought, 'Oh, wow. Any time you make a movie about the Hells Angels, you're making a statement.' I ended up playing the lead in The Wild Angels and it was my breakout."

PETER BOGDANOVICH: "Roger called just before he was supposed to start shooting and said, 'George Chakiris doesn't like the script. He was supposed to play the lead, and he dropped out. He says the script is immoral. Now what do we do?' He had Peter Fonda cast to play the part that Bruce Dern eventually played. Peter was already set. So I said, 'Well, maybe we could bump Peter Fonda up to the lead.' And Roger said, 'Let's have him come in; why don't you come meet him with me?' Peter came in wearing aviator glasses and a leather jacket, and at one point he took off his glasses to clean them, and put them back on and left. Roger turned to me and said, 'What do you think?' And I said, 'I think if he keeps his glasses on through the whole picture, we're all right. Don't let him take his glasses off, he looks weak when they're off.'"

BRUCE DERN: "Roger treated the Hells Angels with the utmost respect. What struck me about them was they were men of their word. And a lot of them had been either in Korea or were about to go to Vietnam. They were patriots. Roger was only paying these guys $10 a day for the actor, the machine, and his old lady. So he was getting two human beings and a motorcycle for ten bucks. We did the movie in ten days. I had a second unit sequence, where I had to steal a policeman's motorcycle and take off on it. And that entire sequence was directed by Peter Bogdanovich. It wasn't just the people in front of the camera who were learning. On The Wild Angels, Bogdanovich was riding in a sidecar shooting second unit, and Francis Coppola was also behind the camera. John Landis was an extra in the graveyard scene. We were all thrilled to be there—thrilled to be able to go to the University of Corman. None of us realized that's where we were, but that's where we were."

PETER BOGDANOVICH: "At one point during the movie there was a fight scene between the Hells Angels, who were real Hells Angels, and some townies. We didn't have enough townies, so Roger said to me, 'Run in there.' I ran in there, and within seconds I was down on the ground. They were kicking me. I was bleeding from ear to ear. Anyway, we kept falling behind, and finally Roger was fed up and said, 'We're wrapping tomorrow.' And I said, 'Roger, you've got so much of the script left to shoot.' He goes, 'Second unit will do that.' I said, 'Who's gonna direct second unit?' He said, 'It doesn't matter who directs the second unit. My secretary could direct the second unit! You could direct the second unit! Anybody can direct the second unit!' I said, 'Well, I'd love to.' It was an amazing learning experience. It was the first big hit counterculture Hollywood movie, and it sort of started the New Hollywood."

BRUCE DERN: "One of the most disappointing things I've experienced in this business is the fact that Roger never got a chance to direct a big-budget motion picture. The most money they ever gave him to do a movie was 1967's The St. Valentine's Day Massacre, and even that, he had to use all of the Fox contract players, like George Segal. But he did this wonderful thing for Jack Nicholson and me, which was he gave us bit parts in that film. Roger made sure that we each worked a day in the first week, and a day in the last week, so we got paid for five weeks. That was about the nicest thing anybody had ever done for me.