Bob Hope: Thanks for the memories

But it wasn't enough for Bob Hope. He got up early in the morning one day last week to fly in a Lear jet to San Francisco. He let me fly along. He wanted to surprise a ballroom full of Budweiser distributors with an unscheduled walk-on during a sales convention. After a standing ovation and a few quick one-liners ("President Carter didn't invite me to Camp David, maybe because Begin doesn't like hams..."), Hope was back on the jet and flying down to L.A. to tape his comedy special. (Budweiser, not surprisingly, is one of the sponsors for the show.)

"It's got a great title," Hope said. "They're calling it Bob Hope's All-Star Comedy Salute to the 75th Anniversary of the World Series. I'm not sure, but I think it sets a record for the longest name of a TV show."

Hope looked tanned and relaxed and nowhere near his 75 years; he'd worked on his material - for the walk-on and the TV special - while flying up to San Francisco, and now he'd scheduled the return flight for an interview for the World Book Year Book. His schedule accounts for every hour in the day, and he's working somewhere almost every day of the year.

"The man continues to amaze me," says Ward Grant, who handles Hope's public relations. "Here he is 75 years old, and he's working harder than he ever has. We keep statistics. Last year he did 250 personal appearances. Played 39 rounds of golf for charity. Was on more than 40 talk shows. Taped a season of TV specials. Flew tens of thousands of miles..."

Hope's schedule is simplicity itself, for Hope. "It's a great life," he said. "Say I'm going somewhere to do a show. I get there, I sleep late, I have breakfast, maybe I play a round of golf somewhere, or see the sights. Then I'm on at 8 p.m., I do an hour and a quarter, an hour and a half of material, and I'm finished.

"It's a great feeling, working in front of an audience. Keeps you fresh. I love it. But when I'm finished, I'm finished. I want to unwind. That's why I've never played Vegas. They want you to do two shows a night. After the first show, I want to call it a day. I've never liked doing a lot of shows in one day although I've done it, of course, during the overseas trips to entertain GIs. And once when I wanted to set the house record at the Palace in New York, so we opened early and squeezed in a couple of extra shows. I seem to remember they had a 75-minute sea epic on the screen, and to sneak in another show we cut out 15 minutes of waves..." 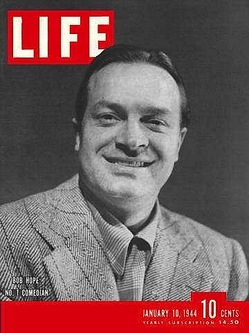 It's been a good and a bad year for Hope. It started tragically with the death of his longtime friend and sparring partner, Bing Crosby. It had its high point when Hope's 75th birthday celebration made him the toast of Washington; he was honored by a special session of Congress, during which, he recalls with a smile, no less than three congressional house rules were broken: "The rules say members can't recognize anyone in the gallery, or tell jokes, or sing. They did all three, if you call that singing..."

Was the congressional tribute the proudest moment of his life?

"One of the proudest, yes. There was a great moment in 1963 when President Kennedy gave me the Presidential Medal. I was standing all alone in a little room opening onto the Rose Garden, waiting to be introduced, and I had the strangest memory. Maybe it was being all alone that inspired it; I remembered standing by myself in front of the Woods Theater on Randolph Street in Chicago, and looking across the street at Henrici's restaurant, and thinking 'They're eating. I'm not.'

"I was trying to break into vaudeville at the time, and not doing a very good job of it. It was just about then I decided to change my first name from Leslie to Bob."

He smiled. "It sounded chummier."

Crosby's death brought an end to plans for them to team up once again with Dorothy Lamour for another Road movie. But now, Hope says, he's thinking of doing a Road movie with George Burns. "It's terrific, the success George has had recently," he said. "And I like to stick around him because he's the only guy out here that's older than I am."

Hope's early motion-picture days were spent at Paramount, the home studio for W. C. Fields. What was Fields like? "Absolutely unique. He had this little gag he'd pull on Paramount. They'd give him a script and he'd take it home, supposedly to study it, and then he'd call up and announce that it needed work but he thought he could fix it. Then he'd just work in one of his old vaudeville routines, and charge them $50,000. On 'The Big Broadcast of 1933,' for example, he stuck in a golf game that had nothing to do with the movie. What Fields didn't know was that Paramount expected him to charge them $50,000, and he was worth it, so they budgeted for it before they ever gave him the script."

The jet landed not far from beautiful downtown Burbank, and two hours later, Hope and Charo, he in a baseball uniform, she in an astonishing variation on a jogger's outfit, were taping their sketch before a live audience in the NBC studios.

The audience was made up of people who just happened to be taking the studio tour when Hope needed an audience, and they looked pleased with themselves for getting to see Hope in person: Their applause and laughter seemed a couple of notches more enthusiastic than they might have been for anyone else, and I remembered a short exchange on the plane.

"I don't want to embarrass you." I'd said, "by referring to you as an institution..."  "Go right ahead," Hope said with a grin.