Unlike the umpteenth not-quite-official sequel in the "Django" series, Sergio Sollima's 1967 movie really IS an obscure spaghetti western worth a non-genre addict's time. A non-addict is likely to be nonplussed nonetheless by the elaborate four-disc set assembled with loving care by the Grindhouse folk. It's one Blu-ray, two standard def DVDs, and a compact disc of Ennio Morricone's superb score, the credits theme of which provided the name for John Zorn's Morricone tribute album. The whole thing's a delight, and as for the Blu-ray, it's a really beautiful 2K restoration of superb materials, presenting a not-insubstantially expanded version of the English-soundtracked U.S. release. The picture itself has a very clever scenario that's conspicuously more knowing than almost anything in the genre save "A Bullet For The General." Like "Bullet," it's conspicuously leftist, which doesn't inhibit it from being an excellent chase picture.

Tomas Milian displays great enjoyment in playing what seems to have been his signature type for a while that is, the creep who turns out not be a creep, really. And Lee Van Cleef gets across in spite of the unfortunate fact that he didn't get to provide his own voice for the English version. —A-

Otto Preminger's second CinemaScope feature (his first was the largely superb "River of No Return," released in 1954, the same year as this one) sees him delighting in the possibilities afforded by widescreen right from the opening, a sinuous and simple traveling shot following Good Girlfriend Cindy Lou (Olga James) into the army camp where (spoiler alert, for the non-opera-buffs out there) doomed Joe (Harry Belafonte) is stationed. The movie has gotten a lot of smack over the years for being "static" but it's really more a matter of Preminger knowing when NOT to move the camera (e.g., when Max Roach is playing a drum solo). This is a beautiful disc of what I consider to be a downright heroic film (yes, its segregated all-black milieu is "unrealistic" but I actually find it kind of refreshing to see a film with no white people in it) and one that's ripe for rediscovery. And Max Roach is in it. No extras though. —B+

"Embrace of the Vampire" (Anchor Bay/Starz)

"Packs a substantial erotic punch," reads a blurb from Entertainment Weekly on the back of the Blu-ray package. Hey, I wrote that! Is it still true of this 1995 movie, and now that I'm happily married and everything? Um…well, Alyssa Milano sure is naked quite a bit in it, and she's a very good looking young lady, and was even more so in 1995. So shut up, okay? The horror/exploitation picture is pretty dumb, former New Wave quasi-icon Martin Kemp is a pretty unconvincing vampire, and the special effects aren't as good as those that would turn up on Ms. Milano's even cheesier witchy TV series "Charmed." Still. It has what it has, in high-def sharp enough to reveal the facial blemishes of much of the young cast, and James Van Der Beek shows up in an unbilled bit part. The audience for this knows who (if not what) it is, if I'm not mistaken. They may buy with confidence. —B-

A very interesting double feature highlighting two pictures from eccentric B-producer Albert Zugsmith, one of them directed by the man. The main feature is a heretofore very infrequently seen 1964 adaptation of the "bawdy" 18th century novel, helmed by none other than Russ Meyer. The disc presents a very sharp and attractive rendition of a very disappointing film. I know—directed by Russ Meyer and co-starring precode cutie Miriam Hopkins and future Fassbinder pretty boy Uli Lommel, what would be not to like? But the director never meshes with his material, and the result is the flattest of his black-and white films. The second feature is a color film directed by Zugsmith himself and starring Troy Donahue. It begins as a wildly eccentric meta-Western with ace lensing by Gabriel Figueroa, and soon devolves into a drawn-out version of the slapstick music segment in an episode of "The Monkees." Again, really well-presented, but for junk junkies only.— B 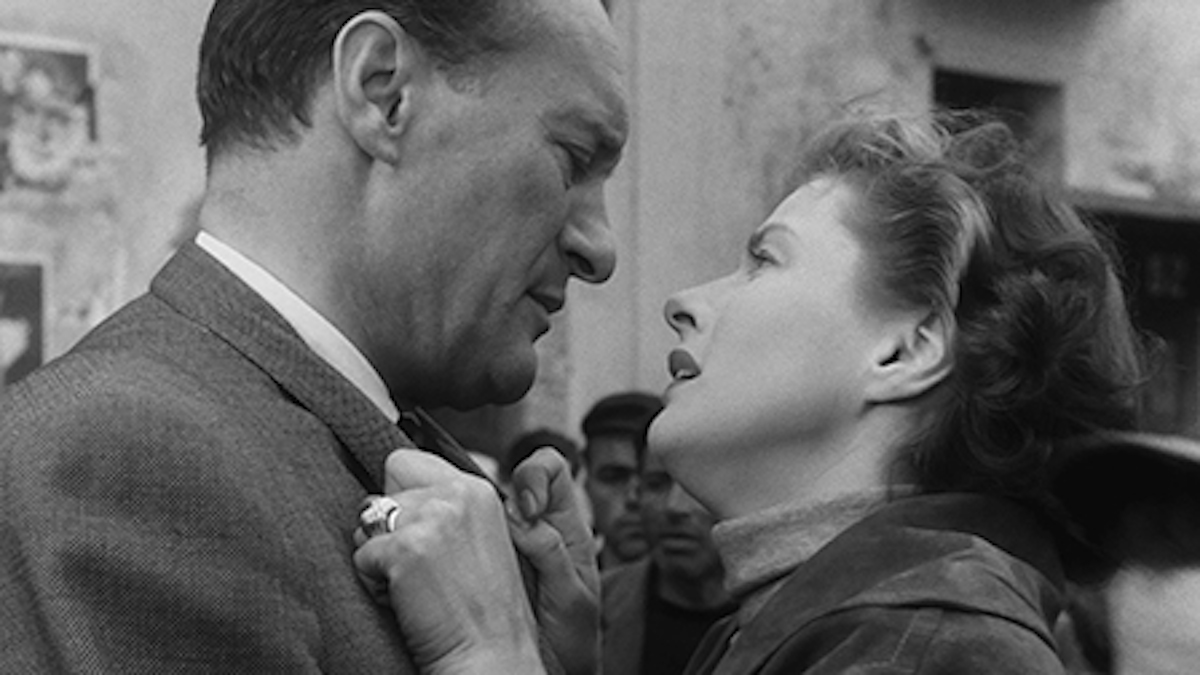 Criterion continue to his it out of the park as regards Rossellini; about four years after its early 2010 War Trilogy box set, featuring the staggering "Paisan" and "Germany Year Zero" alongside the more widely-seen "Rome Open City," the label presents the three tortured, eloquent films the director made with a Hollywood movie-star fan who became a collaborator and then a wife. Meticulously laying out the different versions of both "Stromboli" and ""Europa 51" and bringing the amazing "Journey In Italy" a clarity never seen in the rep house let alone on a home screen, the set constitutes a landmark in film preservation, not just an exemplary consumer good. Extras, both text and video, provide explication—"Stromboli" is really in particular two different movies in its English language and Italian versions, and an interview with film scholar Elena Dagrada details how this came to be. —A+

Child actor turned adult actor and old-Hollywood gadabout Roddy McDowell certainly must have drawn on some observations of showbiz life when crafting his sole directorial effort, a 1970 story ostensibly drawn from the folk song/story of the same name (an alternate title is the more literal "The Devil's Widow"). Ava Gardner stars as a mysterious mansion-dweller who likes to keep young people around in a non-stop quasi-jet-set party. Geez, wonder why. Connoisseurs of keeping-up-with-the-counterculture explicitness will be disappointed that McDowell keeps the dark doings PG-rated (I know I was) but, as if to compensate, he uses a lot of distorting lenses. A typical Olive oddity with a typically passable transfer. I dug it. —B-