A recent item from UK's Daily Mail states that Naomie Harris' Miss Moneypenny will see action again in the next James Bond film, due out in late 2015. If the report is true, rather than sit behind her desk in M's outer office, Moneypenny will rejoin Bond in the field in the movie still being called Bond 24.

The UK press has a cottage industry in printing ridiculous rumors about forthcoming Bond movies and most of them should be dismissed out of hand, like the one that surfaced over the summer about Penelope Cruz playing the villain in Bond 24. Yet the author of the Moneypenny item is Baz Bamigboye, and many of his exclusives about the last Bond movie, "Skyfall," proved accurate. 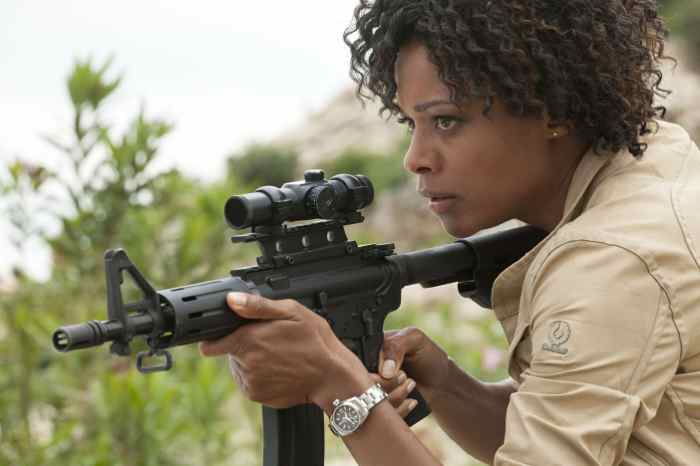 Significantly, he reported more than a year before the film's release that Harris would be the new Moneypenny, a character absent from Daniel Craig's first two films. The producers denied his claim and swore up and down that Harris would play a field agent named Eve. Once "Skyfall" was released it was easy to see why the producers sought to keep the character's identity secret. They wanted it to be a surprise in the final moments that field agent Eve's last name was Moneypenny.

Bamigboye called that one right, and based on several other scoops he appears to have a reliable source in the Bond production offices or the studio. Fans have come to treat his gossip items with respect. In this case, he quotes an unnamed executive as saying: "The idea formulating in Bond-land is for Naomie to be much more of a sidekick to James."

Should this happen in Bond 24, it will contradict Moneypenny's character arc in "Skyfall." She was introduced as a rookie agent who accidentally shoots Bond during the pre-title sequence. After a mid-film dalliance with 007 in Macau, Moneypenny decides she isn't cut out for field work. As "Skyfall" ends she has accepted a position as M's personal assistant and sits at the desk that was her realm in the Ian Fleming novels and original films. She would be the Moneypenny we remember, except that her "customary byplay" with 007 now has a history. 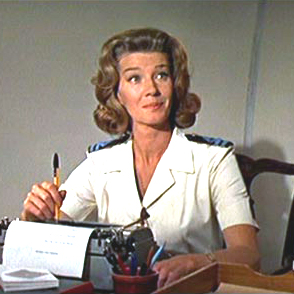 The earliest readers of Fleming's novels may have been mystified as Miss Moneypenny developed into a key fixture of Bond lore. She was a minor character in the books who interacted with M more often than 007. Bond was happy enough teasing the secretary (first Loelia Ponsonby, then Mary Goodnight) he shared with the other members of the double-oh section.

As Bond leaves M's office in the novel "Thunderball," he does pause to chat up Moneypenny. Their interplay prefigures the flirtatious relationship they would enjoy in the movies. This brief passage may well have been the template for the cinematic Moneypenny because "Thunderball" was on the British bestseller lists when Harry Saltzman and Albert R. "Cubby" Broccoli secured the rights to make the Bond movies.

"Thunderball" was also the first book they planned to film. Richard Maibaum had turned in a draft of the script before legal worries over that particular title (Fleming based the novel on an unproduced screenplay he co-authored with two other writers, but didn't give them credit) forced the producers to regroup. They dumped "Thunderball" for "Dr. No," with Maibaum co-writing the script. I have no proof, but Maibaum might be the reason filmgoers know Miss Moneypenny instead of Miss Ponsonby. 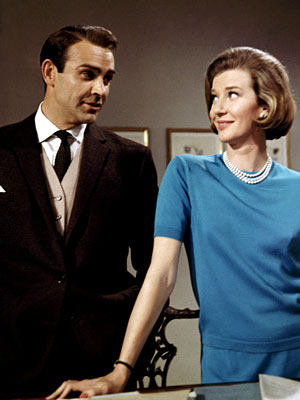 Whoever gave Moneypenny her big break, the character's longevity must be attributed to the first actress to play her, the late Lois Maxwell. Although Moneypenny "dreamed hopelessly about Bond," as Fleming put it, Maxwell portrayed her as a woman who was also a friendly verbal sparring partner and older sister to Bond. She did this without raising uncomfortable thoughts about the incompatibility of those roles. 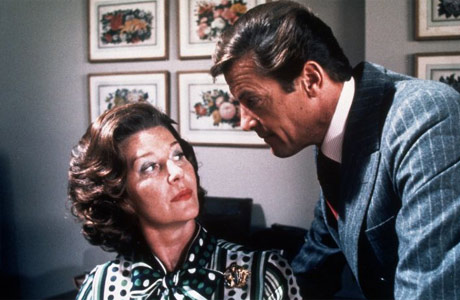 A favorite with audiences from the beginning, Maxwell played Moneypenny in 14 consecutive films from 1962 through 1985. She modulated her performance to serve as a perfect foil to Sean Connery, Roger Moore and, for one time only, George Lazenby. Don't snicker over Lazenby. Maxwell's scenes with him in "On Her Majesty's Secret Service" are perhaps her finest in the series. Try not to choke up when he tosses his hat to her before departing on his ill-fated honeymoon.

When Moore retired after "A View to a Kill," Cubby Broccoli (by then the sole producer) told Maxwell a new Bond would need a new Moneypenny. It was not a popular decision, but it was the right one. Lois Maxwell was beloved, but no one needed to see a sixtysomething Moneypenny swanning over a thirtysomething Bond. 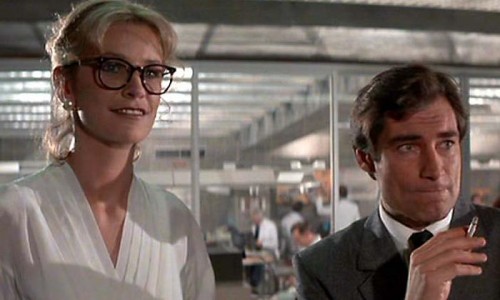 Caroline Bliss played Moneypenny in the two Timothy Dalton pictures. She failed to make an impression, despite delivering the weirdest come-on in the series' history. In "The Living Daylights
Advertisement
" she invites Bond to her flat to listen to her Barry Manilow records. He declines.

Studio financial problems kept Bond out of theaters for six years, and he reemerged in "GoldenEye" with Pierce Brosnan carrying the Walther PPK and a new boss played by Judi Dench. Perhaps the idea to recast M as a woman made Moneypenny redundant. Having the new M dress down Bond as "a sexist, misogynist dinosaur" was brilliant, but having the new Moneypenny (Samantha Bond) accuse him of sexual harassment was overkill. 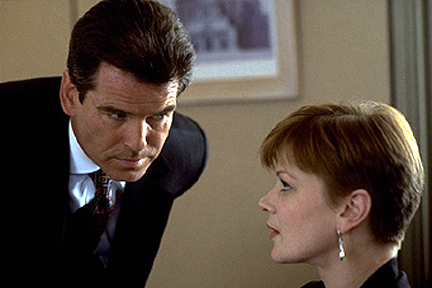 Despite her last name, Samantha Bond was miscast—she was too brittle from the get-go—and the creative choices that shaped her portrayal were disastrous to the character. The sexual harassment line was meant as a joke, but it didn't come off that way. It existed as a broad wink to the audience, that the new creative regime acknowledged Bond's sexist history and they wouldn't let him take Moneypenny for granted anymore. Problem is, he never did. Connery through Dalton regarded Moneypenny warmly. The attempt to break the fourth wall in "GoldenEye" insulted the collegiality of past Bonds and Moneypennys.

This unfortunate scene set the tone for the rest of Brosnan's run. Samantha Bond remained tart and dismissive. Brosnan appeared ill at ease with her. Two former chums now seemed to hate each other, trading insults because tradition required them to speak at least twice a film. They weren't helped by the blunt dialogue that plagued Brosnan's tenure. Moneypenny's "cunning linguist" quip in "Tomorrow Never Dies" makes me shudder just thinking about it.

When producers Michael G. Wilson and Barbara Broccoli (Cubby's children) chose to reboot the series with Daniel Craig's leaner, more aggressive Bond in 2006's "Casino Royale," they left Moneypenny and her MI6 cohort Q out of the picture. Their absence was controversial even among casual viewers (hardcore fans were incensed), but given the mistreatment of Moneypenny (and to a lesser degree, Q) during the Brosnan era, allowing these supporting characters to simmer off to the side until the filmmakers knew how to reintroduce them was a smart way to go. 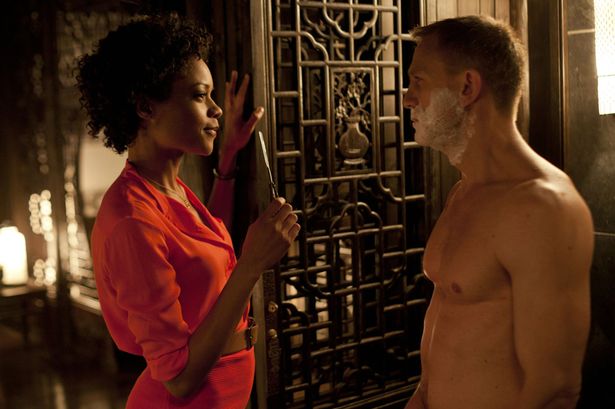 One of the delights of "Skyfall"—a Bond film with many delights—was Naomi Harris' gradual emergence as a modern-day Moneypenny (and to give him his due, Ben Wishaw was superb as a younger Q). Harris certainly enjoyed better chemistry with Craig than putative leading lady Bèrènice Marlohe, although that is partly due to a twist in the script. Harris' performance apparently impressed the producers and returning director Sam Mendes enough to defy the final moments of "Skyfall," which promised a return to the MI6 of the early films, and send Moneypenny back into the field.

Because it just might be true, the Daily Mail item has Bond fans riled up (an easy thing to do, really). The immediate reaction was that that Bond has gone 50 years without a sidekick, and he doesn't need one now. The word "sidekick" has been incendiary, and I suspect Bamigboye's anonymous source chose it poorly.

Bond has never had a sidekick and is known for operating alone, but to call him a loner would be inaccurate. He has collaborated with CIA agent Felix Leiter and other MI6 operatives many times over the years. Citing Bond's independence isn't a strong enough argument against him reteaming with Moneypenny, providing she doesn't shoot him again. 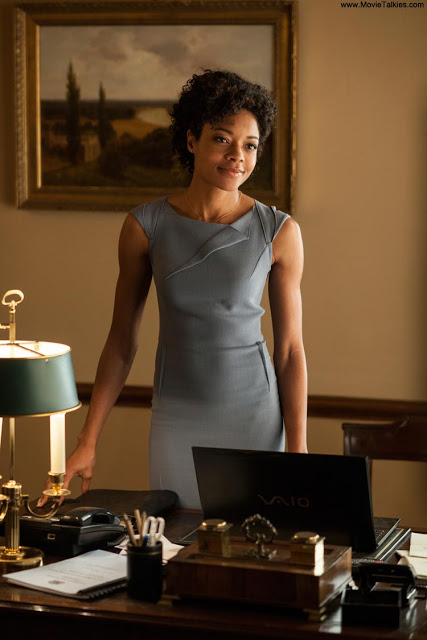 I believe sending Moneypenny on assignment with Bond is a bad idea for other reasons. Even before the reboot, the films were focusing too much on internal MI6 politics. After he spent so much time in London in "Skyfall," I want to see Bond gallivanting around the world again without another MI6 agent in tow or worrying he might fail his next physical.

As I have thought about it, though, my objections to this rumor have less to do with Bond's integrity and more to do with Moneypenny's. After 25 years of getting Moneypenny wrong, the filmmakers, and Harris, finally got Moneypenny right again. Why tamper with that? She doesn't have to join Bond in the field to be an important player. I understand the cries to let Bond be Bond, sure, but I also say let Moneypenny be Moneypenny.