There’s an infuriating, likely apocryphal, story that, after her first screen test, Bette Davis was described as having less sex appeal than the dopey, gangly, and dramatically unsexy comedic actor Slim Summerville. This may never have actually happened, but it feels true considering the longstanding belief that Bette doesn’t just contradict our expectations of how a major Hollywood star was supposed to look at that time but that she’s outright ugly. She isn’t. But that’s not the point. At the beginning of her career no one at Warner Brothers had any idea what to do with her. Then she had a shock of platinum blonde hair, a slim waist, the sort of beauty that electrifies more than allures, and huge doll eyes flickering with a strange luminosity often communicating more than the paltry scripts given to her. Even this early on, there is a spark of something powerful and the beginnings of what would be the foremost thematic preoccupation in her career: anger. It is because of this, in spite of what the studio system’s machinery sought to shape her into, that she became not only a star but one of the most elemental, powerful actresses ever to grace the screen.

In the early 1930s through the 1940s Bette was at the forefront of a curious subgenre known as the women’s picture. The women’s picture could take the shape of a bitter, hothouse noir (“Leave Her to Heaven,” 1945), a musical (“Cover Girl,” 1941), a sharp drama (“Born to Be Bad,” 1950), or an epic melodrama (“Gone with the Wind,” 1939). Despite its shapeshifter status, what links the genre is its concern with placing women—along with their emotional, intellectual, psychological and social experiences—at the center of their own cinematic world. Bette’s image was the perfect balance of china and steel, vulnerability and strength that articulated the shifting cultural dynamics her audience was experiencing during World War II. Underneath this image of the go-getter modern woman, Bette subverts a myth that is perhaps the most recognizable image of female anger in the Western world. 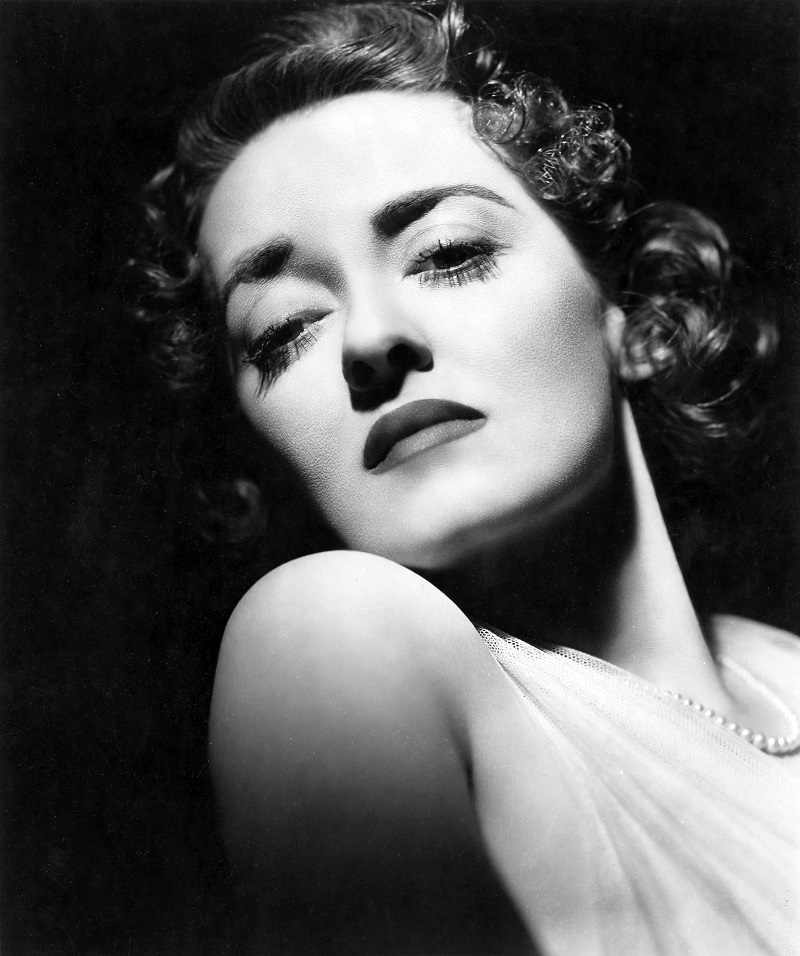 Medusa’s myth is primarily understand in broad strokes: hair of writhing snakes; glare that turns men to stone; her head severed and voice lost to became a weapon for Perseus, later an emblem on Athena’s shield. Ovid added new texture to her past as a young maiden raped by Poseidon in Athena’s temple and turned monstrous by the goddess. The fear of expressing anger and its repercussions is a wounded inheritance for every woman. This is reaffirmed by how Medusa’s myth ends only in tragedy and loss. As girls, we’re told to snuff out this anger and ignore how useful a tool it can be to shape our lives or we’ll be doomed to a lonely existence. It’s a lesson I tried very hard to ignore as a young Afro-Latina, even though anger has an even heavier weight because of certain racial stereotypes all black women are forced to deal with. Then here comes Bette Davis in my life. I don’t remember exactly when I first saw her. In "All About Eve" (1950), during my mid-teens, perhaps when I was grappling with returning from a second trip to the mental hospital. Or maybe it was a little later when I was heading off to college watching her tear her way across the screen in "Whatever Happened to Baby Jane?" (1962). I don’t remember the first film of hers I watched, but I remember how I felt. A surge of recognition. A spark of inspiration. A clarion call through the darkness inviting me to use anger instead of ignoring it or being destroyed by it. Despite the Production Code leading to her most prickly, transgressive characters meeting tragic ends, Bette subverts the myth of Medusa by finding humanity in the monster and giving her back her voice. The earliest, most dynamic signs of Bette’s preoccupation with anger is in "Of Human Bondage" (1934) and "Marked Woman" (1937). 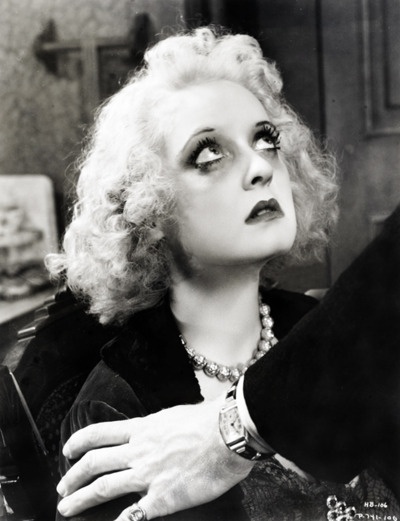 In "Of Human Bondage," Bette plays vulgar waitress Mildred Rogers who both terrorizes and arouses Leslie Howard’s sensitive artist. As Mildred, Bette is a spiteful mess wreaking havoc throughout the lives of everyone in her path. In "Marked Woman," which has her playing off Humphrey Bogart, Bette’s anger is righteous as she stands up to the mob even after a beatdown leaves her scarred. Bette is utterly hypnotic in both roles, dominating each scene she’s in with a blistering presence even when she doesn’t speak. And yet her craftsmanship feels unrefined. She hasn’t fully tapped into what she can do with anger quite yet. A few years later, during her second collaboration with director William Wyler, she does.

When directing his second film, "In This Our Life" (1942), John Huston saw something “elemental” in Bette. It was as if “she had a demon within her which threatens to break out and eat everybody. The studio confused it with overacting. Over their objections, I let the demon go.” Bette made an art out of finding the humanity in complex, unlikable, even outright evil women. In William Wyler’s "The Letter" (1941), she stars as Leslie Crosbie, the wife of a British plantation manager who kills her lover in cold blood at the start of the film and creates a disturbing fiction to cover up what is essentially murder. Leslie is a tricky role to pull off. She’s undoubtedly a femme fatale with cold-hearted ambition and little sense of morality. In lesser hands, she could easily be a shrill, anti-feminist creation. But one of Bette’s greatest strengths is in seeing the woman behind the monster. She’s most known for an anger dripping with braggadocio—loud, vulgar, crackling like fresh fire. This is seen in her set of identifiable acting flourishes—hand-wringing, using her cigarette to punctuate sentences or communicate mood, sharp strides across the screen as if marching into battle—that are easy to get hung up on and even confuse for overacting. In this way, Bette can be construed as a camp punchline, the flattened image of a monstress much like what our culture has done to Medusa. But in doing so you lose the ability to see the way she can subvert our expectations communicating the texture of anger through arguably the best tool in a cinematic actors arsenal: stillness. 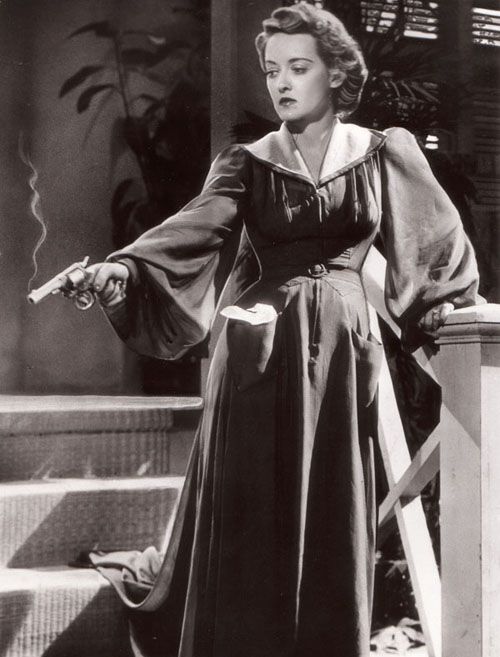 "The Letter" opens outside, in the dead of night amongst the sounds of nature. The near-silence is broken by a man we later learn is her lover staggering from Leslie’s home and the shots she fires again and again until she empties her revolver into his back. Her eyes as bright and hypnotic as the full moon that looms above her. Without her most well-known actorly flourishes, Bette relies purely on a cool, assured physicality. This opening proves Bette was even more powerful in the quiet moments when her anger needed to seethe rather than explode.

Even in her more romantic, tender-hearted dramas, where Bette can sometime be found playing outright martyrs, that anger is still there. While the scripts that lay the foundation of much of her filmography require short bursts of anger from the various characters she played, Bette instead braids a rich tapestry with the emotion carefully evoking its ebbs and flows. We can see it in the sharp way she jabs her cigarette as if violently punctuating each sentence. We can hear it in the way she draws out her words. We can experience it through her gaze, which often feels as sharp as the edge of a blade, or like that jolt of pain when accidentally touching an open flame.

"Now, Voyager" (1942) crystallizes her intelligence as an actress as she recognizes that anger comes in many textures and flavors. The film follows Bette as Charlotte, the sheltered daughter to the wealthy and controlling Ms. Vale, struggles with mental illness and isolation but is slowly able to wrestle from her mother’s grip with the help of a psychiatrist (Claude Rains) and sheer will. As Charlotte, Bette demonstrates the full breadth of anger in inventive ways, even when it seems no longer useful for its protagonist. But Bette understands the way anger propels. Anger can be underscored by the cold ache of loneliness. It can be as hot as the noonday Miami sun. It can simmer beneath the surface of ours lives causing us to quietly rebel until it openly erupts. Throughout her career Bette displays a keen understanding for the emotion in all its complexities—how anger can be tender and righteous, the aftermath of a scar or the creator of one. Perhaps, it’s her understanding of anger and refusal to shy away from its power that caused her to strike fear in the hearts of (male) critics and filmmakers, alike. 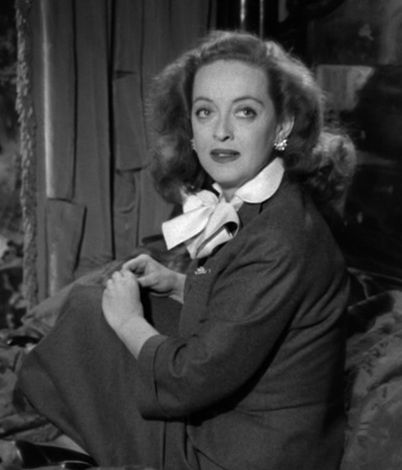 When Joseph L. Mankiewicz decided to cast Bette as the lead in "All About Eve" another director warned him about what he was in for. Edmund Goulding directed Bette in four films, including "Dark Victory" (1939), and said to Mankiewicz, “Dear boy, have you gone mad? This woman will destroy you, she will grind you down to a fine powder and blow you away. You are a writer, dear boy. She will come to the stage with a thick pad of long yellow paper. And pencils. She will write. And then she, not you, will direct. Mark my words.” I’ve never been frightened of Bette like many of the critics and filmmakers who speak of her much like Goulding does. Entranced, inspired, and challenged, yes. But never afraid. Perhaps because watching Bette has always felt like watching my own emotional landscape writ large. Something I believe many women feel.

One of the most layered depictions of Bette’s anger is her least known, in the TV film "Strangers: The Story of a Mother and Daughter" (1979) co-starring another powerhouse, Gena Rowlands, as her estranged daughter. After a twenty-year absence, when the two women come face to face, Bette’s posture is rigid, her face set by a hardened glare. But there’s also the flicker of something else in her eyes, in the way she sets her jaw that speaks to the shared history between these characters and the chasm that has grown between them. This flicker shows how Bette understands that such unbridled anger often is the mark of our most personal wounds.

Bette’s legacy is ultimately predicated upon her unique ability to understand and fully inhabit truly unlikable characters. She excelled at playing wounded and wounding women without an air of apology or condescension toward the characters (or audience). She played complicated characters whose monstrosity sometimes turned physical in the form of thick, mask-like makeup or physical scars. It isn’t that there haven’t been other actresses to take up this mantle. But none have done so with the consistency, honesty, and sheer delight that Bette brings to the screen. But more than anything, Bette turned anger into an art form and showed the humanity in the kind of women our culture often ignores. Through Bette’s artistry, her most transgressive characters aren’t cautionary tales but bold emblems for a way of life too few women are allowed to live. Perhaps Bette’s legacy is even more personal in the way she feels like a voice, an image reaching across the darkness to tell us there’s another way to survive.