You see me here, you gods, a poor old man 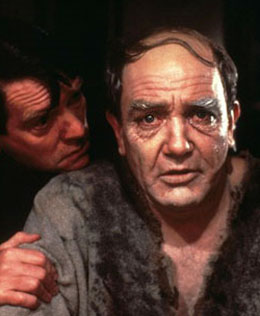 It sounds gloomy, but people in "The Dresser"(1983) stick together and try to go on while believing they are accomplishing something in spite of their mundane reality in and out of theater. At one moment, one character confides to the other about her life spent on theater business: "No, I haven't been happy. Yes, it's been worth it." Norman, played by Tom Courtenay, can say the same thing if asked. 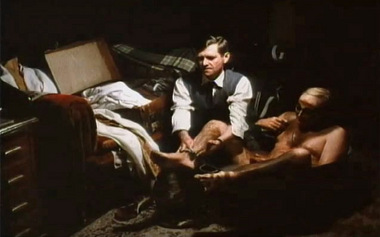 The name of his employer, played by Albert Finney, is never identified throughout the story, but he is "Sir" to everyone in his touring company, and that name is even written on the plate on his dressing room door. It seems Sir was a respectable Shakespearean actor with the glorious past, considering a memorial plate for his Hamlet performance in the dressing room. We are not sure whether he really received a knighthood as his name suggests, but that is just a trivial matter. He has his company firmly under his control while leading his people around the provinces, and no one questions about his authority. 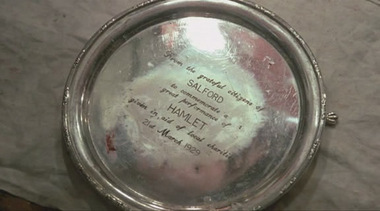 But now his mind as well as his world is crumbling. It is Britain during World War . News about the air raids is heard from the radio. We hear later that one theater was actually destroyed during air raid. Most of the young people have been drafted to the army, so actors Sir has mostly aged performers. He frequently complains about their performances, but Sir himself is a big old ham, and, to make the matters worse, he is losing grips on reality with deteriorating health. The fact that Sir now has to play King Lear for the 227th time is quite ironic. Maybe he was too young to play King Lear before, but now he may be too real to play him -- he's already living through that role with Norman as his Fool. He tears away his clothes and shouts aloud on the streets outside. He confuses the roles he must play tonight. He has trouble with remembering the first line. It becomes clear to others surrounding him that his remaining days are not so many. 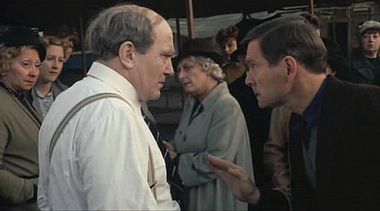 In spite of his problems, Sir is insistent about appearing on the stage, for the show must go on. While others, including his wife and the stage manageress, have some reservation, Norman absolutely agrees with Sir. As usual, Norman supports him, motivates him, and indulges him while Sir's temper unpredictably goes back and forth between pompousness and helplessness. As this dynamic interaction between them goes on, things get started in and out of Sir's dressing room. The other actors are preparing for their roles. The crew is checking the stage and props under the stage manageress' supervision. The seats are being ready for the audiences to come. The show time has come at last, and everything is ready for Sir, but is he all right for coming out on the stage? 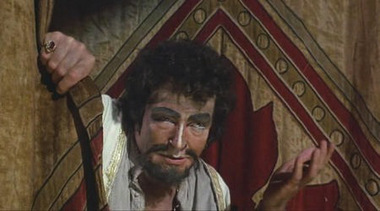 The movie is based on a well-known stage play with the same name written by Ronald Harwood, who adapted his play for the film. Before his playwriting career, he worked as a dresser for the Shakespearean actor Sir Donald Wolfit (1902-1968), and his story was based on his experience during that period. Like the character inspired by him, Wolfit managed his touring company, which performed in London during World War 2, and he was also famous for his performances in Shakespeare plays, especially King Lear.

According to some legends, Wolfit was not that different from Sir. While he was a good actor (he was memorable as Laurence Harvey's possible future father-in-law in "Room at the Top" (1959), he was also a tempestuous and tyrannical boss. Disliking being outshone by supporting actors, he hired mediocre actors, and he drew criticisms for that and other several other reasons. Although he is regarded as one of the notable British stage actors during his time, some of his peers including Sir John Gielgud did not think highly of him (Gielgud: "We always regarded him as something of a joke"). None the less, comparing Wolfit to Sir is no more or less than comparing Anna Wintour to Miranda Priestly, and "The Dresser" was by no means Harwood's roman à clef a la "The Devil Wears Prada". 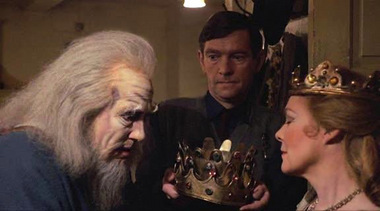 Harwood's story is an insightful drama about people revolving around the stage and their small, shabby world. Sometimes what happens backstage is far more interesting than what the audience sees on the stage, no matter how lousy or good the performance is. There are the human problems involved with vanity, insecurity, discontent, enmity, and so on. There is always nervousness among people before the curtain rises. They often have to adjust quickly to sudden changes or problems by such means as extemporizing, while facing the grim possibility of something worse than a lousy performance. Amid all these difficulties, they sometimes rise to the occasion, and it is exhilarating to watch such a moment like when Norman and others work exhaustively and exultantly together like a "Band of Brothers" for creating the storm effect for Sir playing King Lear on the stage. 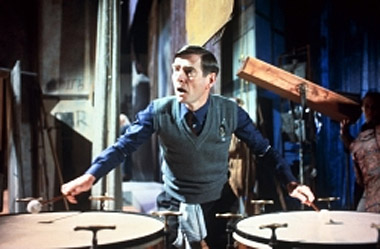 Like many notable movies based on stage plays, the success of "The Dresser" depends on the performances, and the film is driven by a fabulous duo performance by Courtenay and Finney (they were both Oscar-nominated for Best Actor). They look so different from each other on the screen that, while watching it, it is sometimes hard to believe that both actors started their respective movie careers as the members of promising young British actors during the 1960s. Finney began his career with a fiery performance as a young working class hero in "Saturday Night and Sunday Morning"(1960); Courtenay gave an unforgettable performance as a juvenile delinquent defiant to the authorities in "The Loneliness of The Long Distance Runner"(1962). (Both movies, coincidentally, were adapted from Alan Sillitoe's works).

Although he was around 40 at the time, Finney looks convincingly far older as a fascinating shell staggering on the line between vulnerability and arrogance. He is your average egomaniac artist who makes the lives of others hard and takes what he gets from others for granted. He is capable of showing some gratefulness, but that is only after he's overwhelmed by sudden introspection triggered by his performance. Despite all these selfish and petty behaviors, we understand that Sir really needs help and we feel sorry for that. However, this stocky old ham has not lost all of his sound and fury yet, and Finney's vigor goes at full throttle whenever it is required. There is a terrific scene at the train station where he shouts at a train that dares to leave without him with his loud, commanding voice: "STOP... THAT.... TRAIN!" 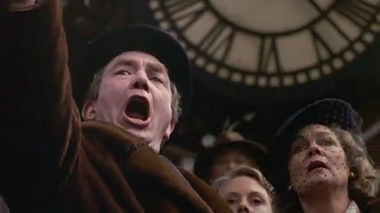 Courtenay, who played Norman in the original play, complements Finney's bravado with his typical sullen intensity coupled with nervous mannerism and quiet desperation. His performance seems sometimes a little too dated and stereotypical at present, but it is still heartbreaking because, inside his exaggerated gestures, we eventually see a sad man who cannot imagine life without his employer. Outside the theater, it is hard for Norman to live with his homosexuality, which is accepted in his world without mentioned much. Around that period, homosexuality was regarded as a criminal activity, and, even when actors gossip about their fellow actor recently jailed for that, they do not directly mention it. 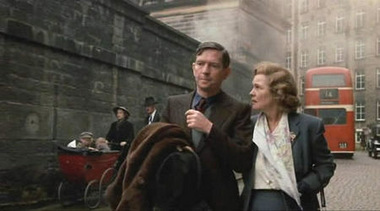 The director Peter Yates, who passed away last month, is widely known for his other notable works like "Bullitt" and "Breaking Away." This film is an actor's movie belonged to Courtenay and Finney, but it should be mentioned that Yates provides the appropriate space and atmosphere for the story in an unobtrusive approach (he was rewarded with Oscar nominations as director and producer). Faithful to its origin by focusing on the main background, the movie rarely feels stagy or stuffy. We are pulled into its small world while observing small details like wigs, makeup, and that funny superstition associated with "The Scottish Play."

The supporting actors surrounding Courtenay and Finney including Eileen Atkins, Edward Fox, and Michael Gough are also good as the people of this world. Unlike his bombastic score for "Krull," a disastrous SF movie directed by Yates in the same year, James Horner composed a sparse, somber score right for the film's gloomy mood. (On a side note: during the makeup scene, his music interestingly foreshadows the quiet part of his classic score for "Apollo 13.")

"The Dresser" is a very good stage play adaptation with a sad, poignant story about a symbiotic relationship between two miserable characters. It is funny because it honestly shows how pathetic and silly they are; it is also moving because it sincerely reveals how seriously and desperately they struggle. Poor Norman. He knows about how their relationship works, but he has been blind to why it works. When the moment of truth inevitably comes upon him, alas, it is already too late for him. "What about me!?"