Waiting and waiting for Godot 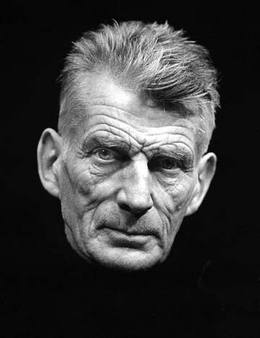 Still, if nothing is changed, it still doesn't mean it will work as a motion picture. Some of the greatest works of literature have been adapted to the silver screen with a faithful structure and direct character quotations, only to fail miserably. Take Henry James' "The Europeans" for example. The novel is a perfectly enriched with interesting characters trying to adapt in a sudden clash of cultures.

However, when James Ivory decided to film it without bringing any major changes, the result was disastrous. The motion picture version is rather dull and pointless even though it stays faithful to the book.

There have been many films similar in spirit to "Waiting for Godot" but rarely does any match the brilliance of the play. There is something universal about its framework (or lack of context) which is why it has been hailed by many as the most significant English language play of the 20th century. Samuel Beckett's masterpiece is without a doubt the most prominent work of the "Theatre of the Absurd." Ever since its premiere on 5 January 1953 in the Théâtre de Babylone, "Waiting for Godot" has been the subject of many debates. 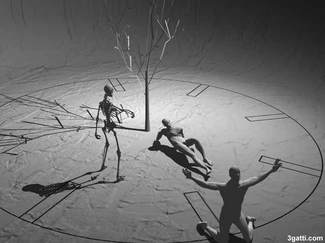 One debate is whether a big screen adaptation would work. This recurring debate of classic literature on film was the subject of much discussion after the recent passing of "The Catcher in the Rye" writer J.D. Salinger. Like Salinger, Beckett was very strict when it came to tempering with his authorial signature. He had specific stage directions; he wanted "Waiting for Godot" to stay toneless. This is probably why he turned down the great Ingmar Bergman. Had Bergman adapted this play, the film's Bergmanesque qualities would step all over the Beckett spirit of the play. In other words, it would no longer be the play we are all so familiar with, but a different personal take on it.

The paradox of making the film your own by staying faithful to the original text is not the only issue here. One thing theatre and cinema have in common is the fact that films and plays are not life, but imitations of life. We get to learn something about life without going through it. Still, the experience of watching a play is very different from experiencing a film, mainly because in film, the camera is a tool used to direct your eyes to certain subjects. The main difference between theatre and film is the aspect of one being live and the other recorded. This fundamental difference when contrasting theatre to movies is very important. Theatre relies mostly on the presence and relationship of the performer to the audience, while film uses technical elements such as camera angles and close-ups to gain intimacy.

There lies the key to adapting "Waiting for Godot" to the big screen. There have been many attempts to capture this play on film. Most often it would not live up to the experience of watching the play because of the process of creativity involved in making a film. I have seen many TV versions of "Waiting for Godot." Most don't even deserve mention because of how horrible they translate. Some overuse music to an extent of transforming it into a musical or use fancy camera shots and dramatic camera movements. 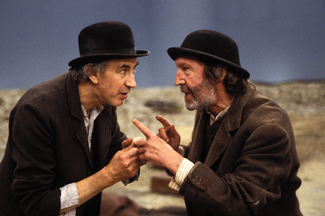 Only one attempt to capture "Waiting for Godot" on film deserves mention. In 2001, an Irish TV movie came out as part of a project titled "Beckett on Film." Director Michael Lindsay-Hogg managed to prove that the play is indeed flammable. The key to his success at doing so was by focusing on directing the actors, marinating the one simple set, and using minimal cinematography. With "Waiting for Godot," it's a case of less is more. Still, watching it on stage is preferred, as Lindsay-Hogg does tend to overuse close-ups. Who is to say I'd be interested in Lucky'sa face more than Vladimir studying the young man? In this version (above), Barry McGovern plays Vladimir and Johnny Murphy is Estragon. The performances are magnificent and worth the viewing alone. While this version is not by any means a perfect one, it still gives me hope that "Waiting for Godot" may one day be perfected on screen.

Assuming that a film would get made - In the case of "Waiting for Godot," the director would have to direct it as a play staying 100% faithful to the stage direction in every single way because we all read, hear, and see things differently. Therefore, a director's vision may ruin this essence for the viewer. In order, to achieve that one would have to strip every cinematic convention and reinvent cinema in a unique way, then again maybe it can't be done and I just wasted too much of my time thinking about it. 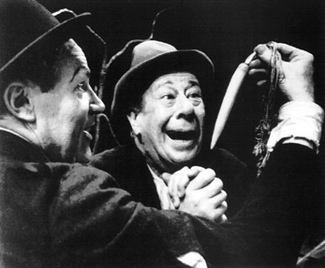 For those of you interested, here's my personal interpretation of the play. I do not by any means suggest that this reveals the truth behind Godot or solves the mystery.

Estragon: "We always find something, eh Didi, to give us the impression we exist?"

Several readers/viewers have interpreted Samuel Beckett's "Waiting for Godot" differently and yet there is no absolute meaning or definition to Godot. It is ironic that the viewer, like the characters of this play, aspires to the knowledge of the meaning of Godot yet neither the viewer nor the characters reach the bliss of knowledge. It is from there that one can connect with both Estragon and Vladimir, for they represent mankind. Therefore, in discussing what they seek, we are discussing what we seek.

I read the play several times, watched several TV versions and witnessed it on stage in London, and for some reason, whenever it ends, a single line sticks with me. I believe this one line relates to the title of the play and encapsulates the meaning of the entire play. Estragon at one point tells Vladimir, "We always find something to give us the impression that we exist." This notion of existence is touched upon several times throughout the two acts. While it is necessary for man to act upon reason rather than feeling, which in this case is the reason for their existence, the humor of it all is the paradox that eclipses everything. We are all limited by this rule of reason. There always has to be a reason for everything. Maybe the significance of the play and the fact that both acts end the same way is that there is no meaning and therefore no reason for our existence. 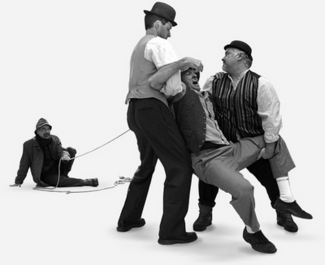 Yet, even though this may very well be the truth of our existence, at the end they still wait in hope for some explanation. Estragon's statement encapsulates the meaning (if there is any) of the entire play. The proof of that is their constant will to assure themselves that they do indeed exist. At the beginning of both acts, Vladimir tells Estragon that they have been at there present location the day before, yet Estragon doubts his claims. During the second act, he even tries to prove their previous presence in their location by pointing at the shoes of Estragon and the hat of Lucky. In other words, he tries to give Estragon the impression that they do exist. However, in doing so he suddenly doubts his existence and asks Estragon in an angry tone if he did see him the day before. Are mere objects the only proof of yesterday and the day before?

Both characters and humankind in general is limited to the frontiers of the mind as well as time and space. Therefore, we can assume that because of that limitation we will never know for sure if we exist or not, we can only give ourselves the impression that we do exist. We wait for something to confirm the reality of our existence yet it never arrives. We wait for Godot. 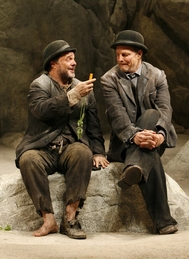 As mentioned before, human beings will never break through the limitations of time and space and time plays a very significant role throughout the play. Pozzo, one of the minor characters in the play, describes the sky as bright and shiny throughout the day but with the passage of time, the sky becomes more and more pale. One can assume that he is talking about life in general. As we age, our skin grows paler just like the sky of any given day. By the end of the play, or two acts or two days, the viewer/reader is given the impression that both main characters have aged. They forget certain aspects; their memory is not whole, just like people of old age. Yet, they still wait for something, anything to give meaning to their existence, or more importantly confirmation that they do indeed exist.

They always find something to give them the impression that they exist. What keeps them going is always "something" that gives them the illusion that they exist. Not just that but allowing ourselves to get distracted by everyday life and its activities helps us cope with this ignorance. Throughout the play, Estragon repeatedly tells Vladimir, "Let's go." To which Vladimir replies, "We can't." Why not, Estragon asks, "Because we're waiting for Godot." This happens after their encounter with Pozzo and Lucky. Their arrival always distracts them from, making the wait more willing. We all go through our daily lives doing our daily activities in a routine. This routine stays the same yet the content of each day varies from one day to the other. Just like the two acts in "Waiting for Godot," the events in both acts are mirror images but the content, what they do and say to each other differs.

The only way out is to hang ourselves and get it over with which Estragon suggests but we most often (hopefully) would rather choose to wait. The fact that they "always find something" means that they feed themselves with false hope that they will reach the true meaning of their existence. It is that spark of hope that keeps them going. This force locks them into waiting for Godot. One might as well express their need for an explanation, their waiting for that key to existentialism as "waiting for Godot."