Varieties of Leaves of Grass 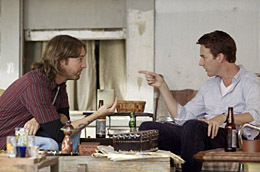 As far as I know, "a mixed bag" is a negative expression, but I think that is an appropriately positive one in case of "Leaves of Grass" (2009) for its seemingly disjointed combination of crime story and philosophy. The movie throws such discrepant stuff into its plot that it could actually make a good shopping list: Latin, marijuana, Socrates, crossbows, poetry, bongs, Heidegger, family, catfish, Whitman, parallel lines, menorahs, swastikas, murder, and so on.

It sounds like a mess, but the film manages to mix them together, and the end product is eclectic in an offbeat way. Sometimes there are profound moments to intrigue us, and then there are absurd ones to tickle us, and then there are sudden bursts of violence that jolt us. The movie freely goes between them as it wants. Some of you may be flabbergasted by the frequent shift of tones of its wacky plot.

My initial response on watching it again was not so different from when I watched it last year. I found it charming, and, when I revisited it later, I found it still weirdly charming. The plot is dopey and sometimes jarring, but the movie follows it rather well. It is balanced nicely between seriousness and goofiness, and, from its well-defined characters, it generates small, enjoyable moments I come to cherish mildly now. Even its hurried conclusion in the third act has an amusing irony considering how the trouble is initiated for one of its two heroes. 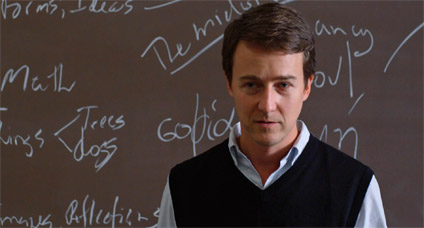 His name is Bill Kincaid (Edward Norton), an Ivy League classical philosophy professor teaching at Brown university in Providence, Rhode Island. He is near the high point in his career as a scholar. His lectures are popular among students at the campus. One female student is so smitten with him that she offers to pleasure to him carnally as well as intellectually to his dismay. People at the Harvard law school also like him very much. They even consider establishing the new department to recruit him. In addition, his recent paper is published in the American Philosophy Journal.

And then the past he put behind a long time ago suddenly calls upon him. He was from Little Dixie, Oklahoma, and he has been estranged from his eccentric family since he left his hometown. As the twin brother of Brady (also played by Norton), Bill takes a plane to Oklahoma immediately after an urgent message about Brady is delivered to him. 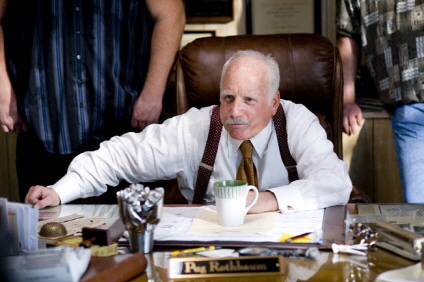 However, that message is the first step of his ex-con brother's shaky scheme to solve a current problem of his. Brady is a illegal marijuana cultivator, and he needs his brother's help in resolving the conflict between him and the local drug dealer Pug Rothbaum (Richard Dreyfuss). Brady's girlfriend Colleen (Melanie Lynskey) will soon have a baby, so he wants to get out of this inconvenient situation as soon as possible. All he asks Bill to do is that Bill acts as Brady for some time while Brady and his friend/accomplice Bolger (Tim Blake Nelson) visits Pug in Tucson for settlement.

Because the film is a crime comedy reminiscent of the Coen brother's convoluted comic plots, it is easy for us to predict that this plan will not work as they hope. Things get complicated with shocks and absurdities, but the movie takes its time in a relaxed mode. Several interesting moments between the characters come along in the plot. They reveal more about not only Bill and Brady but also other colorful supporting characters surrounding them. 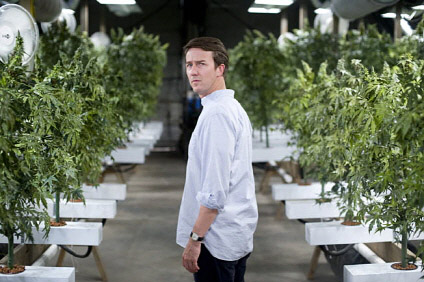 Above all, Brady is a lot more than what he seems to be on the surface. As his brother says later, he is indeed a "colossal fuck-up" who is frequently incorrect with grammar and needs the dictionary to understand what his brother writes, but he is as clever as brother. Not only he does a first-class plant breeding for his illegal product, he also devises and builds an impressive hydroponic system for the greenhouse. And he has some artistic taste in case of decorating his bedroom, although it is not for everyone (including me). 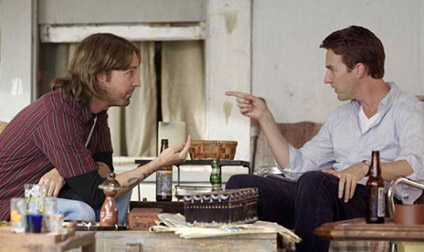 Personally, I find one scene particularly amusing. The brothers have a short talk about one of Bill's papers. While admitting he does not understand all, Brady makes a coarse but succinctly insightful comment: "You all hardly ever write about topics. You write about what some other fella wrote about the topic." When I once took Philosophy 101 during sophomore year, a young unorthodox lecturer told us about such an aspect of South Korean philosophy academia. I guess that tendency is universal.

But the movie also respects Bill, though many laughs come from his reactions to the incidents happening around him. While growing up with his brother under the parents who immersed themselves in the counterculture in the 1960s, Bill desired the guidance for his life unlike his brother. That is probably why he chose to study philosophy -- to find the way to live with a purposeful measure of control amid the randomness of the world. He also chose to distance himself from the family. He changed his accent to be assimilated into his academic world.

He says in his lecture that the balance needed for a happy life is illusory. He emphasizes to his students that your life can be suddenly screwed. But he experiences his knowledge in a hard way. Once he thinks his life is in control, things keep getting out of his control. He can't believe his eyes when the man he incidentally met before suddenly comes into already complicated situation later. Even when he tries to apply a good advice to the real world, the result is far from what he expects. 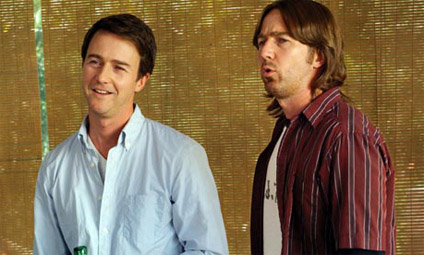 As twins who cannot be more different from each other, Edward Norton gives terrific duo performances. It is relatively easy to put two characters played by one actor together on the screen these days, but the success ultimately depends on the characterization and synergy, and Norton neatly accomplishes his task. While creating the distinctive characters, he also reminds us that they are biologically based on the same genetic makeup. The chemistry between his performances is entertaining enough to forget to detect several techniques for having them together on the screen. 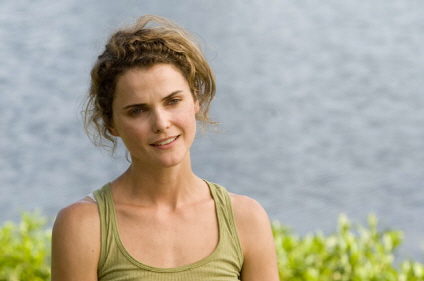 The supporting actors including the director/writer Tim Blake Nelson are the other factors that contribute to the film's quirky charm. Keri Russell is warm as a high school teacher and poet with whom Bill is quickly closer, and so is Melanie Lynskey. Her role is small, but you can understand what Brady sees from her. Richard Dreyfuss obnoxiously but effectively chews his single scene as a pugnacious dealer, and Susan Sarandon gives a short but juicy performance as Bill and Brady's mom who enjoys life at a retirement home in spite of being at least 12 years younger than other occupants. She seems to smoke marijuana as before, but she is a non-nonsense mom to her grown-up sons in spite of that. 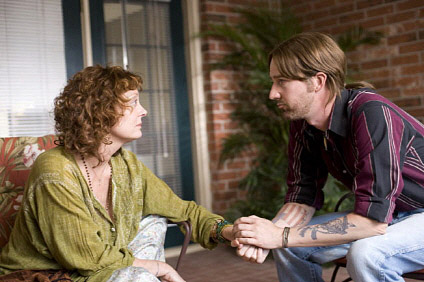 Nelson is more familiar to most of us as a reliable supporting actor, but he is also a good director and playwright. While active in his acting career, he has made few but good films, including "O" (2001), an interesting hybrid of Shakespeare tragedy and modern American high school drama, and "The Grey Zone" (2001), a chilling World War II drama about the people forced to deal with the impossible situation for a very slight chance of survival at the Auschwitz concentration camp.

"Leaves of Grass", his fourth movie, is more lighthearted than his previous works. Nelson was born and raised in Oklahoma, and the movie's background has considerable authenticity. He incorporates the small Jewish community of Oklahoma as a crucial part of the story; that makes his movie look like a distant Okie cousin of the Coen Brothers' "A Serious Man" (2009), another funny story about a university professor who suddenly finds himself in deep trouble.

The film reaches seriousness from time to time in surprising ways. Bill's lecture at the opening scene is quite engaging to hear even if you are not familiar with the metaphysical knowledge. Although I am a guy who is a lot closer to its formal opposite, physical science (when someone says a movie has philosophies, I usually ask what the hell that means), I can say we rarely come across such a lecture like that in the movies; it is really about something.

Later in the story, Bill visits Rabbi Zimmerman (Maggie Siff) about an important matter. When he expresses his confusion, she succinctly points out to him the main cause of the problems in our world. We are intelligent organisms, but we are far from being perfect. We are still biologically animals, and, while trying to solve our problems, we overlook that fact sometimes. Like some characters desperately attempting to solve their own problems in the film, we mess up matters and ultimately contribute to the chaos in the world. We naturally want to find some orders or rules to be relied on, but the chaos continues to reign thanks to us. Maybe it is better to accept the randomness in the world because you cannot prevent it no matter how you try to prepare and control. And help repair the world with others, above all.

"Leaves of Grass" is a good film with smart sides to interest us. I have to admit that it is probably an acquired taste for some viewers, but it is worthwhile to try it at least once. In the middle of movie, there is the conversation between two characters in the car. It is just a casual talk, but it is interesting enough to induce some thoughts. Good philosophical conversation is never hard to understand even though you cannot completely get it.