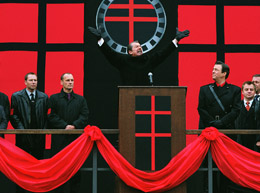 During the revolution Egyptians referenced "V for Vendetta" more frequently than any other work of art. Protestors held up signs that read "Remember, remember the 25 of January." On the internet, Photoshop was used to alter Pharaoh Tout Ankh Amoun's face into a Fawkes smile.

Sarah Abdel Rahman, an activist who ended up on TIME magazine's cover page during the revolution referred to scenes from the film when I discussed the revolution with her. Guy Fawkes' bumper stickers are stuck on the back windows of dozens of cars driving through Cairo traffic; his mask painted red, white and black resembling the Egyptian flag. The list goes on and on, there's no doubt about it, in 2011 "V for Vendetta" stirred up as much conversations in Egypt as when it first spread controversy the day it was released here.

The controversy back then was one that split opinions between critics and film fans alike. Does the film promote terrorism? Is V a terrorist or a freedom fighter? By definition a terrorist is one of two things:

1. a person, usually a member of a group, who uses or advocates terrorism

2. a person who terrorizes or frightens others

V does blow up buildings, but they're usually empty after the curfew and he does kill policemen when they attack him. V is not a typical terrorist, for he terrorizes a group that uses terror to rule the masses. By definition the government portrayed in the picture could be considered terrorists as well for they are a group that "frightens others". The only difference is V could also be considered a freedom fighter. The same can't be said about the members of the British government in the film.

"People should not be afraid of their governments, governments should be afraid of their people." was tweeted endlessly during the revolution, even though I fully disagree with what it says. Fear should not be the driving factor behind anything. In fact, a government should be at peace with its people and vice versa. In other words, there has to be a mutual aspect between governments and their people and it shouldn't be fear by rather a mutual understanding. But this isn't why I decided to write about the film. For a film that better understands this material, I recommend the superior "The Battle of Algiers". Granted the constant referring drove me to revisit "V for Vendetta" and when I did, it wasn't the controversy or the dozens of similarities between both the previous Egyptian regime and the government in the film that caught my attention. I decided to write about how the film delivers its message visually.

James McTeigue's "V for Vendetta" starts with black and white opening credits. The human eye automatically associates black and white with old. Intense military music plays in the background and the images have aged markings on them like they belong to an old film reel. These credits resemble old footage of Nazi propaganda films which plays a major role in this film as historical context is one of its themes.

A narrated voice then transported to the 17th century, 1605 A.D. to be specific. We are introduced to man by the name of Guy Fawkes. He tried to blow up the house of parliaments on November the 5th of that year. Visually we know we're witnessing the story narrated through the costume designs of a period hundreds of years old.

Fawkes is caught and he's about to be executed in front of the public. We get a high angle shot of an angry crowd waving their fists into the air. The fact that the shot was angled from above helps the viewer look down at these people both literally and figuratively.

Fawkes is wearing a white shirt symbolizing his innocence. As the noose is tied around his neck, he searches for a loved one, the only sad person in a sea of angry people. When we finally see her, the shot isn't set up from a high angle suggesting she's the only righteous person there. We then get an extreme close-up of her eyes as a tear slides down her cheek. The use of a close-up is very relevant as it demands and evokes an emotional response from the audience.

The man gets hanged and the camera moves slowly from his head to his struggling body all the way to his feet dangling in the air. As the camera moves down, the figure rises within the frame symbolically expressing a dying man rising to the heavens.

This is considered the prologue of the story as it all happens before the title flashes on the screen. A large V sign lights up the screen, it references two culturally significant signs, the anarchist A symbol and the Z from Zorro. Both of which are very anti-establishment. This sign is hammered to the viewer throughout the picture both subliminally and consciously.

After the title flashes before the screen we are transported to contemporary times. Through careful editing inspired by Eisenstein's theory of montage, we witness two intersecting parallel scenes carefully edited together. They complement one another and eventually both subjects merge within the same frame. V puts on his mask and we cut to Evie (Natalie Portman) stands in front of a mirror. She puts on her make-up. When she switches off her TV, he does too. The mirroring actions suggest that both are heading towards the same path. When their paths finally meet, V saves her from brutal government officers attempting to rape her. 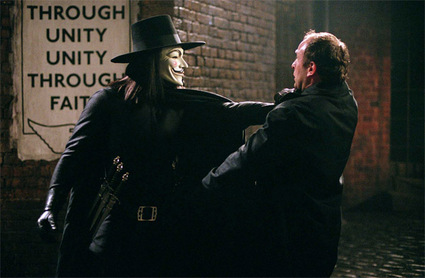 A similar montage can be seen after V saves her from the rapists. After they are set apart, Evie goes to work which just happens to be where V is trying to broadcast a message to the country on live TV. The montage sequence mirrors and reflects the previous one with matching close-ups. Only this time when their paths meet again, it's Evie who saves V.

More mirroring shots occur throughout the picture. Not all of them are between V and Evie. The shots of V talking on TV reflect the ones of the Chancellor addressing the nation. However, both were intentionally captured differently. When V addresses the nation, he speaks eloquently and the screen is clean and well balanced. Yet, when the Chancellor orders his people around, the shots are extreme close-ups displaying his wrinkles and worn out face which symbolizes the old and flawed regime he commands. Also, his shots are often shown from a lower angle meaning the camera was looking up at the subject. This was probably intended to give his menacing presence a sense of power and importance. 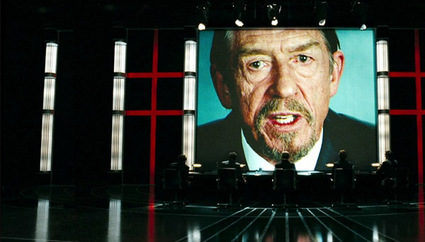 As mentioned before, one of the themes of "V for Vendetta" is historical context. The Chancellor is portrayed similarly to Hitler, and his actions that of the Holocaust. These connotations are presented through carefully designed shots that resemble photographs of that era.

There's also the whole concept of the government officials walking around with a badge that has a symbolic sign on it representing their regime. Costumes play an important factor in this film. Besides the military uniforms, there's the whole concept of V's mask. Early on in the picture, V mentions that the man behind the mask doesn't matter; it's the idea he tries to inject to his followers that is most important. Another clever use of costume design is when Natalie Portman is dressed as a school girl cheerleader visiting a child molesting priest. It is quite clear that Evie is a full grown woman but with through a single costume all is forgotten. Thoughts of pedophilia and sexual abuse are bound to enter the viewer's mind. 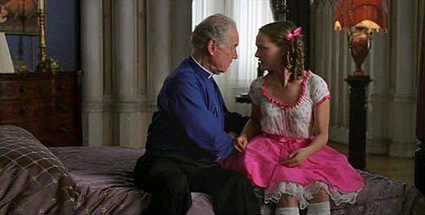 The priest brings back the whole mask concept. Because the priest only seems like a man of God on the outside but from the inside he's nothing but a child molester. In other words like V, the priests is wearing a mask only underneath he's hiding a much uglier soul. His disrespect for his religion is further noted upon when V enters the room to save Evie from another rape attempt. The priest reaches for his gun, which is hidden in none other than the bible.

A more pleasant religious reference is after Evie discovers V was the one imprisoning and torturing her to help overcome her fears. She walks out on the roof and stands in the rain. From this moment on, she's reborn, the rain symbolizes her baptism. We also get a flash of V's rebirth only instead of water it was fire that gave birth to a new man.

Other memorable scenes include the sequence where we get a glimpse of Evie's childhood. In that scene we witness as her mother is brutally beaten and gets arrested while she hides under the bed. The scene mirrors another as she watches a father like figure get beaten and arrested.

As one can clearly see, most shots in "V for Vendetta" are either close-ups, extreme-close-ups, medium shots, some two shots and three shots but rarely any wide shots. I suspect this was also intentional as most scenes take place behind bars, within brick walls of a prison cell, in rooms cramped with people. These scenes evoke a sense of claustrophobia or oppression which is what the government enforces upon its people in the film. However, after V liberates his people, we get a variety of beautifully photographed wide shots. The viewer is no longer trapped within the boundaries of the frames as the director and cinematographer liberate the audience's eyes to deep focus wide shots. V achieves what Fawkes failed to do hundreds of years ago, and at last everyone takes of their masks. Through the collective work of editors, costume designers, musical composers, cinematographer and the director we are presented with a perfect cinematically example of consistent mise-en-scene to visually express the core of the film's message, freedom and liberation. 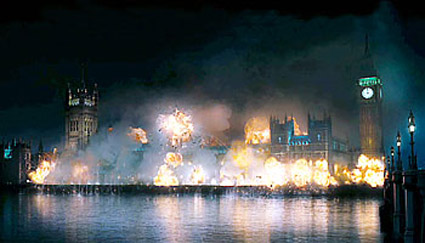 When I marched in Tahrir, I felt a similar sense of unity, the sense of unity can't be described properly in words. You become part of this huge body with a single cause. The roar of the crowds alone spreads goosebumps all over your skin, you look around you and see strangers but for the time being they're your family. You help those in need and they help you, you protect them and they protect you, there's nothing quite like experiencing the same event in masses. It's why we enjoy crowded parties, go the movies in theaters and so on. We tend to be more at ease when embarking on the same incident. So when I watched as thousands marched towards the house of parliaments, all these feelings came back to me. It's a shame it had to end with a beautiful building exploding. Perhaps the V masked people should've continued marching into the building and taken over using foothold. After all, peaceful revolutions can be successful.