Uncle Boonmee as a video installation 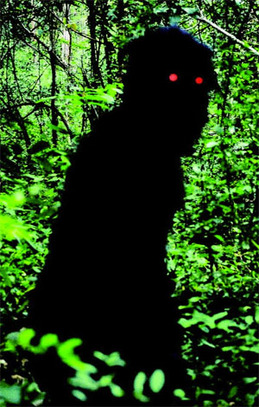 Apichatpong Weerasethakul's latest movie "Uncle Boonmee Who Can Recall His Past Lives" scored some points from me at the beginning. After the enigmatic opening sequence featuring a cow and the jungle shrouded in strange atmosphere, the following sequence with a car going along some country road drew my attention. The land was different, the trees and plants surrounding the road were also different, and the climate was also different, but the mood was somehow familiar to me.

It was not different from what I remember from our family's occasional short journey to my grandmother's country village. We also went there by a car, we also went along a paved country road, and I used to pensively look at the landscape outside car while a little bored in backseat.

Why was my memory about a South Korean countryside stimulated by a Thai movie made in the area I have not known much about? Maybe, I think, the reason is that "Uncle Boonmee" is a retrospective movie about memories. Beginning with a dying man who believes he can remember his past lives, the movie challenges us by throwing impressive visual fragments upon us while intriguing us with its odd styles. The result is rather a mixed bag, and it is not entirely successful as intended in my view, but it is an interesting artwork if we cannot call it "an interesting movie." 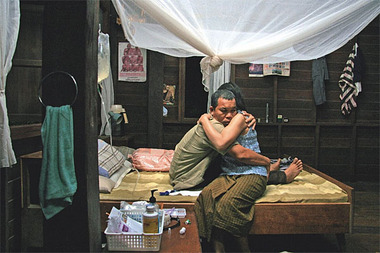 The movie reveals very little about the characters inside that car except that Uncle Boonmee (Thanapat Saisaymar) is dying due to kidney failure. After some time at the hospital, with two of his family members, he is going back to his home in the northeast region of Thailand. His place is in the area next to the border between Thailand and Laos. We see some people from Laos working under him later along with slight prejudice seen from Jen (Jenjira Pongpas), Boonmee's sister-in-law.

After arriving at the house in the afternoon, Boonmee and others have dinner in the dining room as the night descends on the house and the jungle nearby, and we have one of several effective scenes in the film. While they are having a mundane conversation with each other in gentle but monotonous tone(according to Weerasethakul, this flat delivery is the homage to old Thai TV dramas where lines were whispered to the actors and were flatly delivered by them), there is notable awkwardness about the empty space on the left side of their dining table. Then, something slowly appears in that space without much emphasis. The process is so natural and subtle that it took some seconds for me to notice that during my first viewing. 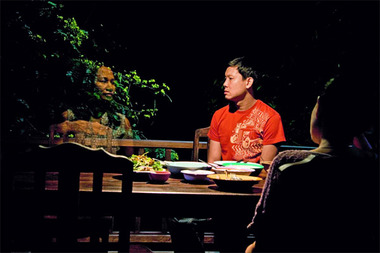 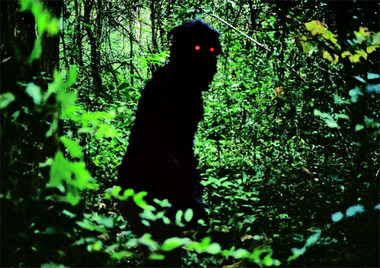 It is the ghost of Boonmee's wife who died 19 years ago. Although a bit surprised by her visit, the living accept her and begin to talk with her as if she were an ordinary guest. If you think this is weird, here comes a weirder thing for you to behold. Boonmee's dead son also comes to see them from the darkness, and he is a monkey man with red eyes (this is another convention from old Thai TV dramas; monsters usually had red eyes gleaming in the dark). I wish Weerasethakul would have had that character stay in the darkness. In the direct light, Boonmee's dead son looks as silly as a talking Chubaka in this utterly serious situation. It may be intended as humorous, perhaps. In IMDb, the movie is categorized as a comedy and fantasy. 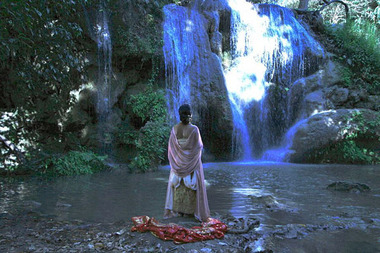 The rest of the movie is not easy to summarize for it freely floats in and out of Boonmee's world while still being elusive to us. After that memorable night sequence, we see Boonmee and Jen interact with his employees on the next day. And then the film momentarily enters the world of folk tales for no reason. An ugly princess is bitter about her face at the pool of a waterfall in the jungle, even though she has an admirer. Later, she has an intercourse in the water with a talking catfish who revers her. It sounds pretty silly (my mind went to that hilarious scene with an underage sheep in Woody Allen's "Every Thing You Always Wanted to Know About Sex, But Were Too Afraid to Ask"), but it is done with restraint and style, and old-fashioned day for night technique adds more otherworldly quality to this scene.

The film is inspired by the book "A Man Who Can Recall His Past Lives." written by the abbot of a Buddhist temple in Weerasethakul's home town. There was really a man named Boonmee and he claimed to the abbot that he could recall his past lives during meditation. Later in the movie, we see Boonmee and others go through that mystical jungle and enter the cave where his first life supposedly began. We are surrounded by ominous sounds. We hear him talking about one of his past lives, accompanied with the montage of photos showing soldiers and a tall man in gorilla suit (I'm not kidding). 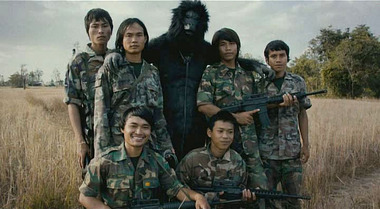 I learned later that "Uncle Boonmee" is a part of Weerasethakul's video installation art project "Primitive," which includes a short film "A Letter to Uncle Boonmee." Using the book mentioned above as the starting point, Weerasethakul subtly integrates several elements from his project into the movie. One of the subjects in his project is a turbulent conflict between the Thai army and communist sympathizers in the northeast region of Thailand in 1965, and Boonmee briefly contemplates on whether his illness is karmic for killing many communists at that time. In addition, Weerasethakul also incorporates autobiographical aspects into his movie; for example, Boonmee's dialysis tool in the movie is the one that was actually been used by his father, who was also afflicted with kidney failure.

With "Uncle Boonmee," I think, Weerasethakul tries to assemble and mix his philosophical and artistic ideas on death, reincarnation, spirituality, and movie along with historical, cultural, and personal aspects from himself and his country on the screen. There are several things I noticed during the second viewing after acquiring some helpful information from Internet, and I think there are still many things unnoticed by me in the movie.

And that promoted me to think about an explanation of James Joyce's Finnegans Wake I came across years ago. In that difficult novel, H. C. Earwicker and his family are continuously transfigured throughout the story while embodying the vast knowledge on human history and cultures contained in the book whose last sentence at the end goes back to its first sentence at the beginning. H. C. Earwicker can be "Here Comes Everyone," and so can Boonmee, probably. We are not sure about his past lives, but his previous lives can be anything shown in the jungle: human beings, animals, or plants, maybe. Considering it is the part of a commissioned art project, "Uncle Boonmee" might be the tip of Weerasethakul's version of "Synecdoche, New York;" these "past lives" sometimes look like small fragments from an elusive bigger world of time and space. 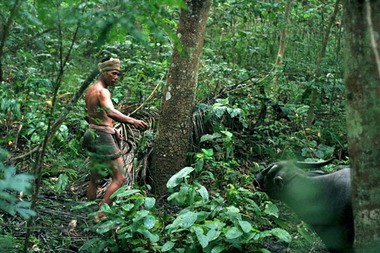 However, despite several interesting thoughts provoked by the movie, I do not think Weerasethaku completely succeeds with his experiment. He indeed provides us beautiful scenes we can appreciate, but the movie is too distant and meditative to be something else. There is little to hold on to in story and characters while it focuses purposely on its space and atmosphere. The characters are presented in long or medium shots in most cases. We are consequently distant from them, even during brief moments when they are allowed to show feelings. The film firmly stays in its position. It never attempts to reach to us while confidently presenting its mystifying images to the audiences. The last sequence does not work for it does not add much to the cluster of images in the film. It has already perplexed us too much.

As a whole, the movie is more like a piece of video installation art. It will not make any difference if you are drowsy while watching it. Or, you can walk into the movie at any point and you still can get the same impression. As a matter of fact, I even wondered whether there will be any difference if the movie is chopped into several coherent segments and then exhibited in an art museum. All it needs is a guidebook they sell us at the entrance of art museums. 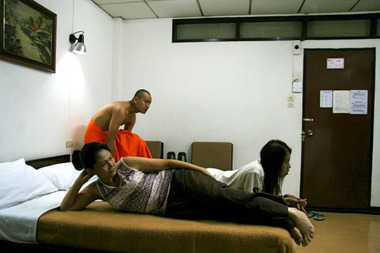 In spite of these sarcastic reactions, I have some admiration for this movie. And I agree with others that Weerasethakul is a very talented director. The movie is slow and evasive, and I do not wholeheartedly like it, but his exploration fascinated me as much as Godard's early experiments in the 1960s. It tries something different; it tries the interesting extension of movie toward installation art. It made me curious about that mysterious jungle and its components while also making me run out of patience.

The movie won Palme d'Or at the 2010 Cannes film festival in last year. Many critics, including our South Korean critics, chose this as one of best movies of last year.

Well, I have lots of reservation about that. I remember my friend Wael Khairy quoting from Roger Ebert's "Awake in the Dark" in one of his reviews: "A movie is not good because it arrives at conclusions you share, or bad because it does not. A movie is not about what it is about. It is about how it is about it: about the way it considers its subject matter, and about how its real subject may be quite different from the one it seems to provide." I don't think I wholly understand what "Uncle Boonmee" is about, but I can say I was distantly absorbed in how it is about.