Tony is troubled as you can get:The villains of "Iron Man 2" 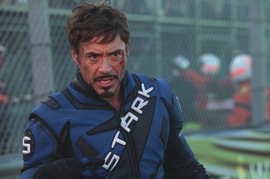 Well, as troubled as you could get in a mainstream comic book. The estimable British TV critic AA Gill once said that people who don't like opera like The Three Tenors. I'd hate to incur the wrath of my fellow fanboys, so I shan't make a similarly droll comparison between comic book aficionados and their ardour - or lack thereof - for the classics, but, suffice to say, the funny books are not the obvious choice when it comes to exploring the truths of the human condition. 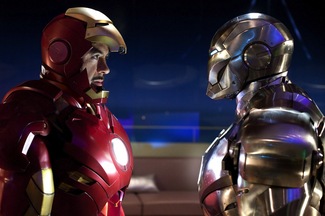 Nonetheless, a soupcon of substance occasionally shines through even in mainstream comics. John Byrne's seminal 1986 miniseries "The Man of Steel," for example, which retconned the early years of Superman, ends with the hero embracing his humanity over his godlike powers. "It was Krypton that made me Superman," he says, "but it is the Earth that makes me human." It's not "The Caucasian Chalk Circle," I admit, but it's still a lyrical evocation of the positivist, progressive message that most superhero comics have preached since the Silver Age.

All of which comes back to Tony Stark, since his relative verisimilitude in the comics was exactly because he was always so frighteningly conservative. Stark was in total contrast to other superheroes: after all, anyone who made a living of producing weapons of mass destruction by day, and using them on adversaries by night, would not really be a hippie. 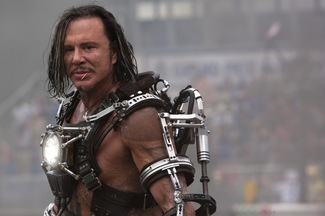 This somewhat sinister core of the character was jettisoned by Jon Favreau in his family-friendly big screen adaptation of 2008. The obnoxious, abrasive, and inherently impetuous representation of America's military-industrial complex in Tony Stark was replaced by Robert Downey Jr's prancing, perfumed, ponce. So, fine, he drank a bit; and, yes, he was loud at times; and, sure, his ego would make Narcissus blush. But his edge had gone - he was no longer an anti-hero: Downey played Stark as a spoiled brat with a taste for fast cars and loose women. In short, he depoliticised Stark.

However, despite this enervation of the lead character, and the film's rather dodgy central theme, "Iron Man" succeeded not just as your typical summer fare, but also as a delightful surprise in a genre that's come to be defined, more and more frequently, by darkness. The cheeky chemistry between Downey and his fellow actors, and the oft-publicised improvisational liberties the cast took with the script, turned the film into a quirky and whimsical comedy of manners. Like a 1930s screwball with robots. Oxymoronically, by shedding Iron Man's most human qualities on the page, Favreau and Downey had made Stark more human on screen. Mind you, it wasn't all fun and frolics. By the end of the film, Tony Stark announced to the world that his company would stop making weapons, and that, yes, he was, in fact, Iron Man. 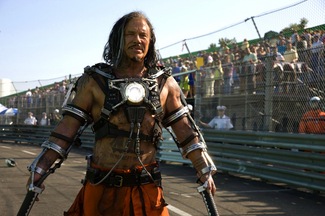 "Iron Man 2" builds on the repercussions of only one of those announcements, and it's not the one I would have liked. Since everyone and their mother went to see it last weekend (and if that was your Mother's Day present, then shame on you, Nerdlinger), it's pointless to provide a detailed recap of the film's plot. Not that there is much of it, anyway. Six months after the events of the previous movie, the Whatchamacallitium in Tony Stark's chest that both keeps him alive and powers his exoskeleton has begun to poison his blood. This is one of the many heavy-handed metaphorical and metatextual vignettes with which the film bludgeons the discerned viewer into submission. The poison running through Stark's blood seems to signify some sort of strife, but the film offers no satisfactory hints as to what that might be. Are we supposed to feel sorry for the way that being Iron Man has gone to his head, and wreaked havoc with his life? I've seen more substance in an E! True Hollywood Story.

This obsession with Tony Stark's patently absurd struggle with fame and fortune would be more palatable if it weren't for the fact that he hangs on to his Iron Man persona with gusto. In an earlier scene during a Senate hearing, Stark dismisses Gary Shandling's sleazy senator's demands to hand over the Iron Man technology to the U.S. government, announcing that he and the suit are one and the same. "Iron Man 2" never questions how Stark deals with his lack of anonymity and the restructuring of his defence company with his responsibilities as Iron Man. But, more importantly, the real missed opportunity is how Stark could reconcile Iron Man the weapon and Tony Stark the peacenik, and that's a pity. 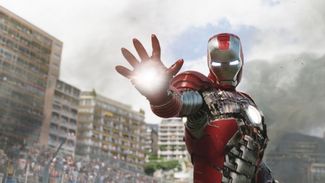 That's not the only plot point that floats aimlessly, like Stark's daddy issues or the extended cameos from Sam Jackson and Clark Gregg ("Hey Kids, Did you know that there is an Avengers movie coming up? Here's Captain America's shield, wink, wink"). Even a delicious scene between the two main villains, Mickey Rourke's leathery physicist Ivan Vanko and Sam Rockwell's clueless arms-dealer Justin Hammer, where the former keeps repeating that he "vants his burd," seems to be a remnant from an earlier draft, with a potential pay-off where Vanko would kill Hammer, and make a quip along the lines of "I said I vanted my burd." Or it could be Rourke messing with Rockwell. Either way, the villains, once again, are great in this film, and allow me to elaborate it further:

The film also lacks urgency. The world seems to turn against Stark after a public altercation with Vanko in Monte Carlo, but the gravity of the situation never quite registers. Escalation, a thread that "The Dark Knight" captured rather well, is almost nonexistent. Stark's drunken antics during his birthday would be more interesting had he been unable to perform his duties as Iron Man, and something truly terrible, like a major catastrophe, actually took place. As it is, the whole second act with Stark's pity party of one lacks any depth, making his subsequent quest for redemption pointless.

Many fans were disappointed by the first film's action - I thought it was inspired. It was lumbering and slow and awkward: just the way two oversized anthropomorphic bulldozers would move as they tried to bash each other into oblivion. The action is much slicker here, though a final sequence where robots chase each other over New York is so dark and fast that I couldn't make heads or tails of who was chasing whom or, in fact, why. Besides, by that time, my mind had already switched off, anyway. 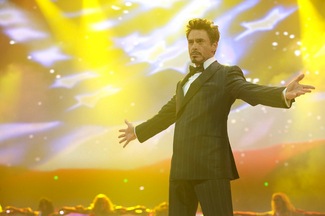 Nevertheless, all of this would be moot, like in the first film, had the cast retained the magic, which they don't. Downey and Gwyneth Paltrow (as his assistant? Lover? Wasn't this already resolved?) lack the chemistry that made their scenes sparkle in "Iron Man," and Don Cheadle (replacing Terrence Howard from the previous film) and Downey just can't replicate the rapport between the latter and Howard. But at least Cheadle gets to wear his own armoured suit, and shoot at things, because Scarlett Johansson, another new addition to the cast, spends the entire film pouting until a rudimentary corridor brawl during the film's finale. No one seems to be having fun. Well, no one, but the comedy duo of Rourke and Rockwell. In fact, I'd like to see those two in a spin-off sitcom.

"Have you done the dishes yet, Ivan? It's your turn!"

"Not before you git me my burd!"