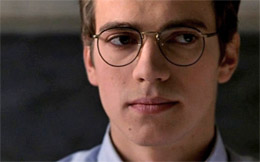 If you haven't heard about Stephen Glass, who was a former employee of the New Republic, you may think he is a nice lad who occasionally screws things up while you watch him at the beginning of "Shattered Glass" (2003). Sometimes it's not easy to be angry about him because he is so sweet and considerate to the people working with him. If it seems they find a problem or error caused by him, he quickly admits and apologizes to them while looking like he is nervous about whether they won't like him any more for that. He frequently asks them as if he wanted to check that: "Are you mad at me?"

With his boyish looks and insecure attitude to draw your sympathy, Glass, played by Hayden Christensen, can get away with many things in that way while remaining a likable guy in his workplace. In addition, he's a rising star journalist of his magazine; although Glass was the youngest employee among the staff members of the New Republic in 1998 (their average age was 26, by the way), he was already a contributing writer to other notable magazines including Harper's magazine, George, and Rolling Stone.

I have not read any of his articles published in the New Republic except "Hack Heaven," but I could understand the reason for his success while watching the film. A young boy hacker who attacked the homepage of a major software company and then made a lucrative deal between him and the company? The debauchery of young Republicans at the political convention? I would not hesitate to read them for a minute if I came across such interesting stories on the Internet.

However, they're really nothing compared to what was revealed about him; it turned out that most of his articles were either partially or entirely fabricated. In its relatively short running time (94 minutes), the movie succinctly shows us not only how he was exposed but also how his misdemeanors had not been noticed in a respectable political magazine like the New Republic, "the in-flight magazine of Air Force One." Sure, articles to be published always go through a painstaking multi-step process before the final approval while being moved here and there around the writer, the chief editor, the copy editor, the fact checkers, the lawyers and many other employees in the magazine, but, as Glass points out at one point, there is a big loophole in this strict system; if an article is mainly based on the writer's notes, the fact-checkers only check the notes unless they want to go further than that for thoroughly verifying its contents.

The people at the New Republic may have wondered about how Glass got the materials for his articles, but they are blinded by their understandable human flaws which are cunningly exploited by Glass. In their eyes, he is a good kid not so sure about himself even with his rising status, and that naturally draws the sincere support from Amy Brand (Melanie Lynsky) and Caitlin Avey (Chloë Sevigny), who regard Glass like their little brother to be taken care of. In case of Michael Kelly (Hank Azaria), who was their senior editor before replaced by Charles 'Chuck' Lane (Peter Sarsgaard), he had some suspicion of Glass when he was informed that one of his articles had a notable error, but, as a good senior editor devoted to his staff, he also had reservation on his doubt; he might ruin a young promising journalist's career just because of a minor fault.

Based on Buzz Bissinger's Vanity Fair article, the director and writer Billy Ray has made a good movie which knows a lot about the world of journalists. While entertained by Glass's fun stories, his co-workers want to be near the sweet smell of his success - and they want to be as successful as him. Brand tries to write something humorous and funny like Glass, but she is frustrated because, as she admits, she is not so good at it. Glass finds himself being ingratiated by the other workers who may be not so different from him - no wonder Glass is harsh to him when he criticizes what that guy wrote in their private moment.

All has been going pretty well for Glass and others, but, like the fall of Enron was initiated by one reasonable article pointing out its questionable success, Glass' success starts being cracked by one reasonable doubt. Baffled by Glass' recent article "Hack Heaven," Adam Penenberg (Steve Zahn), a reporter of Forbes digital, wonders about how the hell he is scooped by Glass, because, as an expert on his field, he has never heard of the names or the organizations in Glass' article before.

While working with his co-workers including Andy Fox (Rosario Dawson) on the matter, he keeps discovering strange things about the article. He cannot find the major software company mentioned in the article, Jukt Micronics, anywhere in US, and he gets no search result from Yahoo at all. There is no such a convention like the "National Assembly of Hackers." There is no such a federal law like the "Uniform Computer Security Act." There is no such a federal government organization as "The Center for Interstate Online Investigation." And there is no hacker named Joe Restil, let alone his agent Joe Hiert. 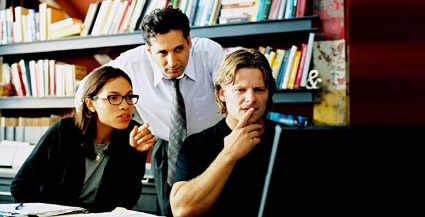 Penenberg and his editor notify Charles Lane, who soon realizes that he is put in a very difficult situation while his doubts are growing minute by minute. Peter Sarsgaard is especially terrific when he quietly conveys to us the accumulating suspicion and fear behind his calm face. Watching Glass pathetically trying to evade Penenberg's questions on the phone, Lane gradually senses that it can be a far bigger disaster then he initially thought.

While all these things are happening, the movie tells us little about Glass' thoughts or the motive behind his fabrications, so he becomes a distant, enigmatic, and unlikable figure as his deceptions are getting exposed step by step. How he tries to wriggle by any means necessary out of the straitened circumstances tightening around him is a compelling drama, thanks to Hayden Christensen' good performance. The more desperately he tries to find an exit, the less chance there is for him to get out of his quagmire - and he still thinks he can do that while the mounting evidence drags hims down to the bottom.

Christensen, who showed us through this film that the stiff acting of his in the Star Wars prequels was not entirely his fault, is effective as a smart young man whose ingratiating attitude becomes increasingly smarmy and annoying in our eyes as it is reveled to us how insincere he actually is - even when he talks about his career in the classroom of his high school. The movie indirectly suggests that he is a pathological liar willing to say anything to be liked by whoever is around him. When his co-workers show chagrin over the dismissal of Michael Kelly and the following appointment of Lane as a new senior editor, he goes further by saying negative things about Lane. But, when he comes to Lane's office later, what do you know, he ingratiates to Lane by saying exactly what Lane likes to hear in his rather uncomfortable new position.

While getting more repulsed by Glass, we come to more identify with Lane on the opposite site, and Sarsgaard's understated but strong performance becomes the moral center of the story (although he was not Oscar-nominated, Sarsgaard received several major critics awards along with Golden Globe nomination). While recognizing what should be done, Lane is a little reluctant about punishing Glass because that action would disrupt his staff; most of them do not like him much for replacing their beloved former senior editor, and he feels pressured a lot by that and other factors while handling this messy situation. 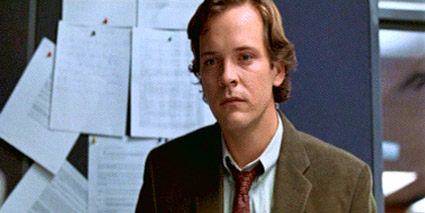 However, as a journalist with firm integrity, he becomes more resolute once he has confirmed that there is no doubt about what Glass has done to the New Republic. When Avey, one of the staff members defending Glass, protests his drastic decision to Lane for, he replies with the cold truth both will soon have to deal with. Sarsgaard and Sevigny play well together in that scene, and the interaction between their performances is crucial in making the transition in their next scene convincing rather than abrupt and awkward. He made the point clear and direct to her, and she comes to understand that with silent realization.

Besides Sarsgaard and Sevigny, there are the other good supporting actors who do more than fill the space in the story in spite of their small roles. Some of them are surprisingly believable as the people living and working in the journalism world, and you may be amused to see that Hank Azaria and Steve Zahn look a lot more serious than usual in their respective supporting roles.

While what is shown in the film is not a big shock to us any more at present (around the time when the movie was released, as some of you remember, a similar scandal occurred at the New York Times), it comes to my mind that, with the rise of Internet journalism, we are now living in the digital era when everything is quickly written, read, and then discarded. In this environment, the misdemeanors committed by Glass can be more easily overlooked, though they can be also easily exposed as soon as they are detected.

"Shattered Glass" is a compelling drama about how people can be manipulated and deceived in spite of their knowledge and experience - and its disastrous consequences. They enjoyed whatever he pitched at the staff meetings, they printed his fictions just because they were entertaining, and they paid a heavy price for that in the end. At the beginning and the end of the movie, Glass emphasizes to us and his audiences; "You have to know who you're writing for, and you have to know what you're good at." Well, he knew, didn't he?