The world has changed, Mr. Bond 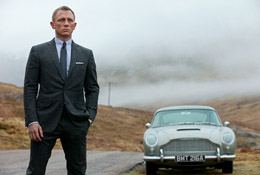 Sam Mendes' "Skyfall" (2012) provides us with one of the best of all the twenty-something James Bond films. It is full of toys, though a different set of toys than we might expect, placing far more focus on the heroes' stories than the villain's plotting. Is there even a real Bond-girl in this movie? And, what about the Bond car? It seems strangely familiar. Rather, whatever traditional Bond characters and trinkets this film skips or skimps on, it replaces with gigabytes of substance. Like you, I have seen all the Bond films - most of them multiple times - even though some of them are just not that good. But, they are James Bond movies, so it becomes almost a duty to the Queen keep up with them as times continue to change. This one, thankfully, is fantastic.

In this film, we again meet Bond's worst villain yet (Javier Bardem), though our real focus is on the twilight of M's (Judi Dench) career as head of the MI6, as well as her role as Bond's surrogate "mom." In the film's requisite opening chase, she has an agent whose riflescope zeroes in on a melee between Bond and his prey, with the problem that they are wrestling on top of a moving train. If the agent shoots, she might hit the wrong person. M makes the choice to shoot. The agent shoots. We gasp. And, we roll into the opening credits. 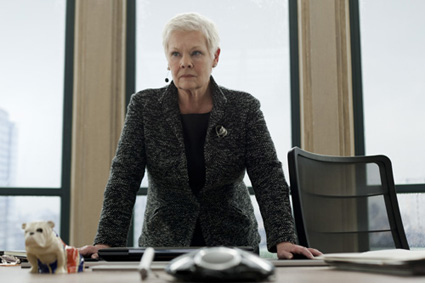 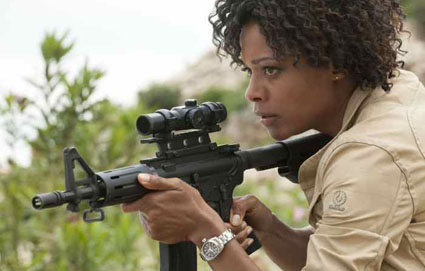 And, that moment raises the first serious consideration in this heavy duty movie: when you are in such a position of leadership that you have to risk lives to take lives to save lives, then you must make massive decisions with minimal warning and fragments of reliable information. Because every choice involves complicated scenarios, there will be few successes peppered by many failures. More than that, there will be consequences, intended and unintended. Beyond that, there will be unfriendly accountability. Meaning, when we take on the role of Atlas, balancing the world on our backs, we had better not blink at the wrong moment, or the sky will come booming down upon us. How many times in this film does something come crashing to the ground from the sky, whether we speak of helicopters, subway trains, or even Bond himself.

These struggles of leadership inform the entire plot of "Skyfall." Accused of losing her sharpness, M gets sentenced not only to volunteer into retirement, but to then stand trial for the choices she has made. She maintains her stiff posture, hardened bravado, and steely-eyed stare, but now her hands tremble. And, while that is happening, she faces the violent blowback of previous choices made on the job, in the form of a spy who has stolen her secret list of agents. We meet Bardem, dressed in unkempt painted bright yellow hair, slippery, shiny white teeth in a rubbery face, and the faint scent of Heath Ledger's Joker, who kill, among others, an MI6 spy named Hussein. On a side note, I began chuckling to myself, thinking that President Obama is not a closet Muslim born in Kenya, but is actually a British Secret Service agent.

Watching this film, I remember our ever expanding operation of drone strikes, which resemble a technological upgrade of that same uncaring anonymous brutality we felt from landmines. In our recent presidential election I was disgusted by the lack of attention (save for one short moment in the last debate) given to this campaign targeting supposed terror leaders, while also killing thousands of innocent civilians, including children. The idealist in me opposes any violence, but the realist in me begrudgingly accepts the reality of war, not only in its cold bloodshed, but also in the balancing of lives. And, we also know that the drone strikes are also a quick recipe to give birth to more enemies, which will then compel another change in strategy. But, these are the choices that a leader faces.

And, these choices recall the next serious consideration of this film: that our world has changed, so too do our methods also change. We recall that moment in that last presidential debate, when Governor Romney challenged President Obama on shrinking the navy, and POTUS responded with his zinger, reminding Romney that we also shrank our use of bayonets and horses. In the Bond movies, when Judi Dench became the new M in "Goldeneye" (1995) in the post-Cold War environment, she accused Bond (then Pierce Brosnan) of following the old world ways of the dinosaurs, though her focus in that specific conversation included a pushback against his legendary chauvinism. Now, the authorities accuse her of sticking to outmoded methods of protecting British interests and populace, thus making everyone even more vulnerable to new threats. She naturally protests that her methods are more urgent than ever. 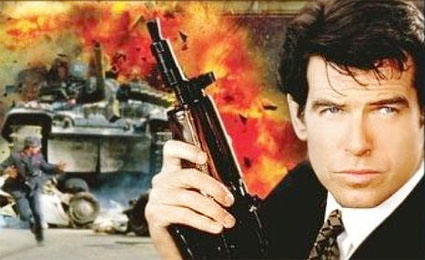 And, she is also that iron willed mother, nurturing her orphan agents through tough love. She is the mother robin who teaches her little birds to fly by kicking them out of the nest. And, when one of her injured children returns with the taste for vengeance, she feigns stoic displeasure, hiding a mother's guilt. But, when another of her children - James Bond - returns with a broken wing, she turns a blind eye to the pain, and sends him along again. This is also the story of two agents suffering from their mother's tough decisions. One of them, Bond, falls out of the nest into a river, losing his own edge, and now seeks to recover it. To do so, he has to return to his roots.

Thus, in taking us forward into the new world, we are also watching a sort of Retro-Bond movie. MI6, now fully immersed in the digital age in technology and staffing, both to its benefit and peril, changes its headquarters. And, where does it go? They shift to hidden caverns once used by Churchill. Further, in order to protect M, Bond must revert to tools from his past lives, finding out that sometimes a knife is a better weapon than a gun. That is the nature of change, is it not: that we can rarely move forward without also reaching back, invoking the lessons of the distant past, while finding out that the utensils from yesterday find new life in the needs of today.

And, looking back to the previous Bond films, I think we all appreciate the current state of James Bond films. "Skyfall" tempers itself from the cartoonish quirkiness of the Moore and Brosnan films. It maintains the burning sentiments of the Dalton films. It has the quiet, charismatic charm of the Connery films. The older Bond films would jump from moment of tension to moment of tension, seemingly every five minutes. This story, however, gets told with great deliberation, moving us from long sequence to long sequence. In addition, this movie provides us with oodles of back story, enhancing the meaning of the deep sentiments.

And, the terrain of cinema has also changed. In the past, Bond's challenge was his American counterpart, Indiana Jones. Bond was the well-dressed killing machine, while Jones was the rugged scholar. Now, Bond faces stiff competition from others of the espionage genre, including the "Mission: Impossible" series, the "Bourne" movies, and frankly, even the toys and humor of "Spy Kids." I'm also realizing that James Bond is the original British superhero. The younger generation might think of Harry Potter, but for us old geezers, it is Bond. 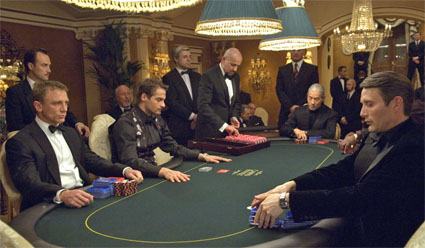 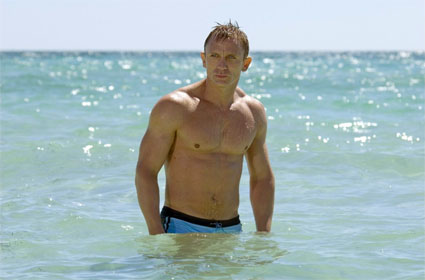 And, as times change, if we combine this film with what may be the best of all the Bond films, "Casino Royale" (2006), I believe we might be seeing the unthinkable: in Daniel Craig, we might have a Bond better than Sean Connery. If it is possible for Britain's "Sight and Sound" magazine to witness "Vertigo" (1958) dethrone "Citizen Kane" (1941) as the greatest movie of all time, then it might be possible to watch Craig dethrone Connery. Times change. If the Broccoli family of producers can keep this team of Mendes and his dramatic expertise, Gassner and his gorgeous production design, and Deakins and his beautiful cinematography, I suspect that it will definitely.