The Pursuit of Powerlessness 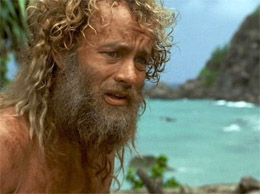 One man. Three acts. Three stories. First, he is an aggressive corporate manager, racing against seconds and minutes to do his work and live his life. Second, he is a quiet man in a peaceful land, where time moves in seasons and years. Third, he is a bewildered man at home, where time has slipped passed him, making him miss the most important events of his life, including his own death. This is Robert Zemeckis' great "Cast Away" (2000). If this were a foreign language film or an independent film with a no-name cast, I am sure it would have received tremendous acclaim. As an American film by a major American director featuring two powerhouse actors (Tom Hanks and Helen Hunt), however, it has been left underrated.

The movie's mistake is that it seems to be the story of a man seeking to return home. After all, it is called "Cast Away." Within its own world, the movie itself does not make this mistake. Rather, in our American world of cinematic conventions, one of the most natural of all stories is the "Get home" story. Among the top money making movies of all-time, this model provides the story arc for "E.T. The Extra-Terrestrial" (2002), "Finding Nemo" (2003), "Alice in Wonderland," and "Inception" (2010), among so many others. When we watch "Cast Away," featuring Chuck Noland (Hanks) crash-landing on an island, we expect it to conform to the norms of the "Get home" formula. So we understand that when the film was first released, its advertising campaign ignited a small uproar for revealing that Noland does indeed get home. To be fair, even Chuck Noland himself thinks he is in a "Get home" movie, until he discovers otherwise. 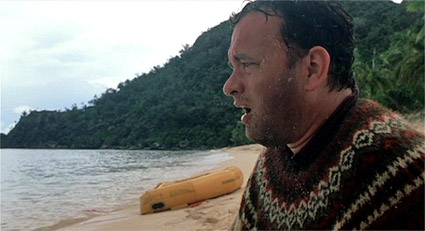 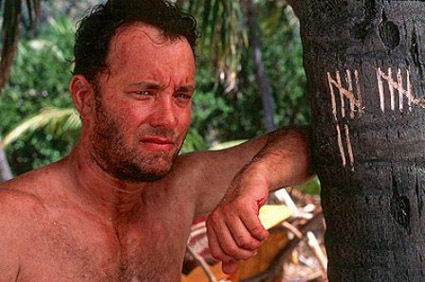 But, this film is not called "Castaway." It is called "Cast Away." First, it is the story of a man trying to juggle his demanding job against the demands of his relationships. Second, it is the story of a man, indeed, trying to return home. And, together, these first two acts also provide the common framework for those "Shipwrecked" stories, like "Hayy bin Yaqzan," "Robinson Crusoe," "Swept Away," "Lord of the Flies," as well as the TV shows "Lost" and "Gilligan's Island." Those from the continent find their social dynamics changing (almost to the point of inversion) as they find life on the island.

I've learned over and over again through my many mini-misadventures that there are some battles in life that we choose, and there are some battles that choose us. Often, those battles that choose us are battles that we would never otherwise embrace. Sometime the battle is a severe illness. Sometimes the battle is a family tragedy. Sometimes the battle is a social challenge. When faced with such battles we summon our strength and capabilities, but sometimes we must first embrace a notion of powerlessness before we can work through the new challenges. Speaking in some hopeful sense, we would like to think that those challenges make us stronger (and often they do), but at the very least, they require us to transform ourselves into persons we never imagined we'd be. The important point "Cast Away" makes is that the ethos of powerlessness yields unexpected hopes from unexpected places. 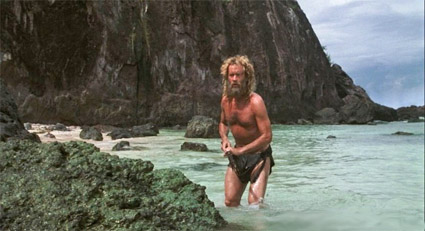 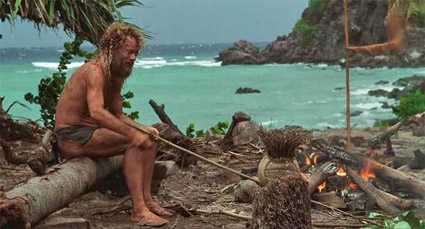 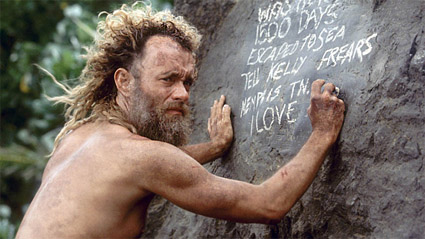 In ancient works, Western and non-Western, authors often faced a pious challenge against making God (or "the gods") characters in their stories. The point is that speaking in the name of the Almighty is the stuff of men (often men) of Divinity. So, authors would instead insert a notion of Fate, that responds to, guides, and compels characters to make particular choices. As a literary device I find it interesting.

As a theology, however, it is a serious problem. Very frequently, cultures and religious outlooks that preach a notion of fate, determinism, or pre-destination would often be cultures or religious outlooks that completely dis-empower their adherents. Often those theologies were promoted and spread by exploitative heads of state or community. The line of reason works as: "You are suffering because God loves you, and God will reward you for your suffering in the next life, but obey your leader in this life and pay your taxes." That is not only nonsense, it is theological violence. Those are traditions of patience, rather than perseverance. Meaning, religion would then be reduced to opium for the masses, to keep the masses down.

But, "Cast Away" takes a very different direction with its culture of powerlessness. The argument here is that there is a greater hand of Fate, with an optimistic future for you in this life, while on the other hand your drive to seize control of your world will be frustrated. Rather, let go, and let the hand of Fate open its arms for you, in this life. But, when it does open its arms, then you will have to make choices. So, Chuck Noland tries to map out every second of his life, and every relationship in his heart, yet something as simple as a toothache begins to debilitate him. Worse than that, his plane crashes. Then, on the island, he keeps trying to forge methods of escape or rescue, but every single method fails. Then, back home, he tries to reconnect with his long lost love, but he is too late. But, when his plane crashes, he finds a raft. On the island, he has exactly enough rope to make his boat. And, back home, he loses his love, but another pathway hints at his heart. 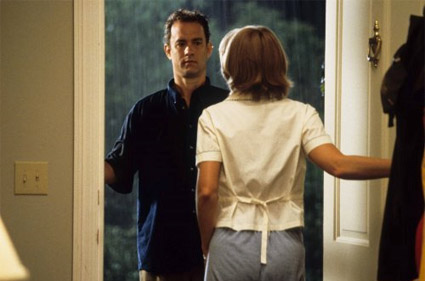 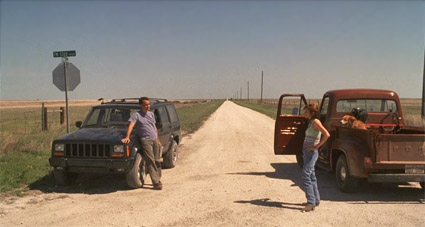 And, the story delves into the nature of relationships. We have innate needs for intimacy and interaction. Chuck Noland was married to his job, so his romance with Kelly Frears (Hunt) suffers. Then, his job betrays him (through the crash). Then, he develops the (in)famous friendship with the volleyball (Wilson, played by Wilson). Then, that relationship takes the direction it takes. Last, he meets the woman with the angel wings. 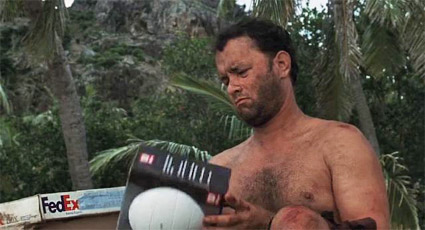 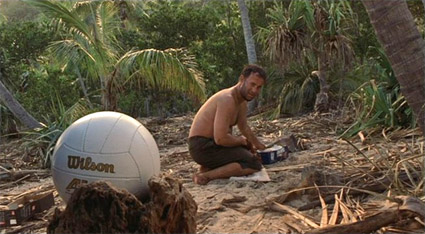 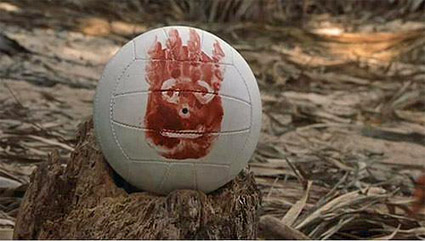 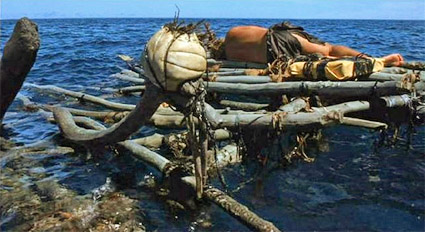 This whole outlook runs so contrary to our popular American notions of independence and domination and destruction. Ours is such an adversarial cultural, through our system of law, our sports, our politics, and our foreign policy, that we thrive not merely on competition, but on dominance. And, the film acknowledges it. Noland works for one of the largest corporations in the world. On the island, he single-handedly seems to devour it of its fertility. But, when he is home, he begins to finally embrace the wind, letting it take him where it will take him, including its directions with his personal relationships. In the end, he is at a crossroad, literally, and is asked to make a choice.

I mentioned earlier that this film would be received differently, had it been a foreign or independent production. But, I think only a few Hollywood filmmakers could make this film, Zemeckis being one of the few. The plane crash sequence is so huge, so frightening, that its budget (even through CGI) would be prohibitive from any other sources. On the flip side, the moments at the end, when Helen Hunt runs in the rain after Tom Hanks' jeep are so intimate that few filmmakers could include the colossal and the quiet in the same film so successfully. 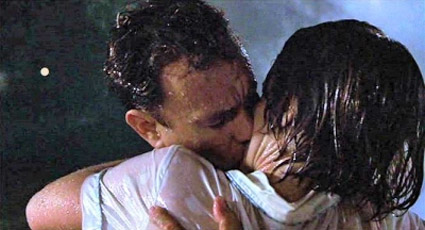 I love telling people that "Cast Away" is one of my favorite films, especially because I love that moment of cordial acknowledgment they give me. "Oh." But, I also love this movie because there are so many awesome moments, that only a Zemeckis could make. But, half a decade after I first watched it, this movie came at the perfect time in my life. Struggling through a very difficult period, I had to discover my own theology of powerlessness as part of a process of later accomplishing huge things I never imagined, and that consequently opened this film for me. At some point, we're each in that raft in the middle of that giant ocean. This story takes our journey to its logical, hopeful conclusion.