The prom night from Hell 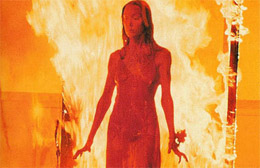 "Carrie" (1976) was based on standard horror material but became memorable thanks to Brian De Palma's ability to keep an audience unnerved every step of the way. Think for a moment of the nature of telekinesis, the film's supernatural gimmick. The ability to mentally transport things is surely not as intriguing or frightening as the gifts of other Stephen King characters, but the director seems to realize that once the public buys it, he can then take liberties and add it to other dimensions related to the protagonist's fears and obsessions. That's s what made the picture unsettling. Some of the De Palma's other films have felt more like exercises in movie craftsmanship ("Body Double," "Raising Cain," "Snake Eyes") but this particular story lent itself particularly well to his usual directorial traits and they felt fresher at this stage of his career. 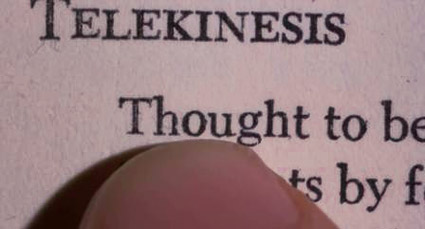 I first became aware of "Carrie" from the paperback edition of King's work, when it appeared at the shelves of the Sears & Roebuck bookshop that I visited frequently as a teen. The cover depicted the title character in all her bloody glory, which made it difficult to miss. A few months later, the screen version became one of my enduring movie-going experiences. The film deals with the story of Carrie White, the outsider in a high-school senior class whose oddness provides her despicable classmates with reason enough to make her life miserable ("Carrie" may be the prime cinematic "bullying" example). Following a particularly distressing event, Carrie's enemies are severely punished--and respond by making sure she's invited to the senior prom where they'll seek the most repugnant of revenges. Consequently, Carrie will fully awaken to her new-found talents and all hell will break loose, quite literally. 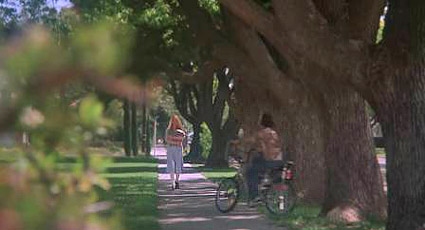 De Palma seems to be on a mission to never let the moviegoer get too comfortable and he does this by constantly shifting the picture's mood from apparent serenity to the extreme opposite. Case in point is the initial locker room montage that starts with the seeming innocence of joyful classmates dancing in slow motion in what appear to be heavenly clouds and then, before you know it, they are back to normal speed and the scene becomes about the hellish fury of a crazed mob. (Most of the girls involved are good-looking and this somehow makes their meanness all the more disturbing). The same applies to most of the scenes with the sinister presence of Carrie's mother Margaret (played Piper Laurie), a religious zealot who is shown as monstrous, pitiful, more than a little campy. Much like in "The Hustler" years before, Laurie is especially good at portraying a severely damaged being and she manages to extract a great deal of humanity from this character, despite playing Margaret way over the top. 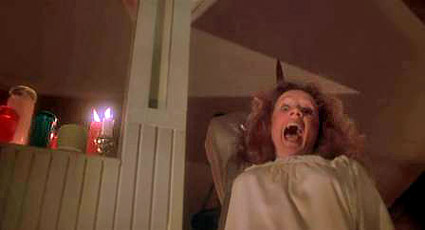 Sissy Spacek's portrayal of Carrie evolves at her various stages, from ugly duckling to mysteriously beautiful prom queen to terrifying cinema icon. Behind her initial creepiness, she's a good soul who clearly deserves a better fate and this puts the audience on her side all the way, right until the point when the mayhem begins and her conversion is complete, as it is impossible to continue sympathizing with a character that now freaks you out in the worst of ways. One perspective for viewing "Carrie" is simply as the title character's rampage of revenge against her tormentors but her story is more reminiscent of a modern day Cinderella tale with the most oppressive of (step) Mothers, an array of evil sisters, a well intentioned but tragic godmother (the Betty Buckley character), a clueless Prince Charming and the unhappiest of ever-afters. 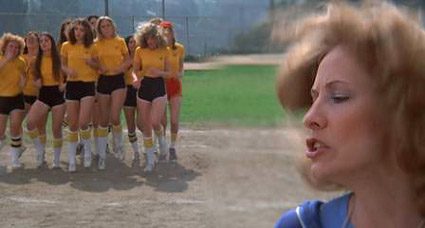 Overall, my main quibble with the picture is that as good a job of casting as De Palma did, this group of actors looks much too old for high-school students. This is a common Hollywood practice; the people there seem to have a problem assigning the parts of youngsters to actual teenagers (think "Grease," "The Last Picture Show" and the various incarnations of "Spider-man"). In this case we are supposed to believe a (then) 27-28 year old actress playing a character who is just reaching puberty. Still, considering that both Spacek and Laurie received Academy Award nominations, it's hard to gripe too much.

The movie doesn't go into great detail as to how Carrie acquired her powers, but they first surface in the scene where she's depicted entering adolescence in the worst of places, companionships and circumstances. During the brief period of her life that the film covers, Carrie realizes that she's not as terrible looking as she always imagined and her unstable mother, in turn, becomes aware of this recognition. She also learns that she has this extraordinary talent which quickly progresses from blowing the occasional light bulb to juggling knives in circus-like fashion. At the same time, her evil classmates develop an insane hatred towards her while their perfect setting for revenge (the senior prom) just happens to be around the corner. 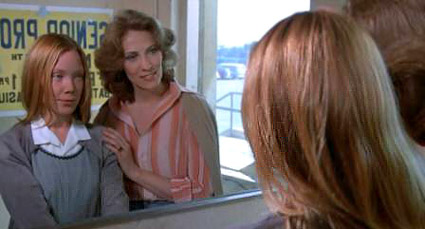 One of the best things about the movie is how it concentrates risky situations in a melting pot and they all explode simultaneously for a memorable conclusion. This is exactly what "Kill Bill" (another female revenge movie) promised all along, but failed to deliver to the full. 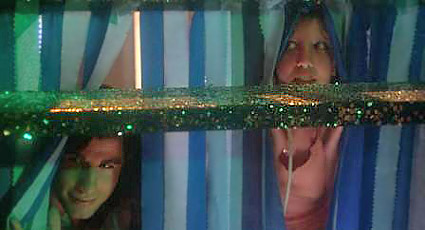 De Palma is famous for his extensive use of diverse cinematic techniques. Some, like the framing of frightening characters from a lower POV and the use of slow-motion/panning shots to d an awful event are suspenseful. Unfortunately, as is common in many of his works, the director tends to get carried away with the gimmicks. There is a scene here that has Carrie's date and friends trying on their prom tuxedos (in fast-motion movement and chipmunk voices). This is not only a pointless and amateurish montage; it also drains some of the suspense from the picture. There's also extensive use of split-screen during the hellish prom scene and, even though it is somewhat useful in portraying various aspects of the chaos at once, there are plenty of camera-crane movements that would have been able to achieve this without resorting to such a distracting approach (split-screen is particularly unbearable when watching the film on full-screen 4:3 TV). 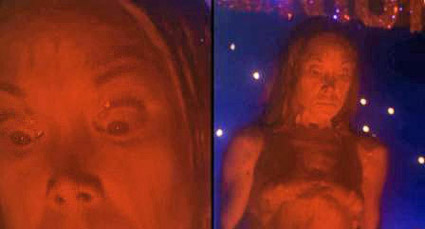 "Carrie" is best known for the most eventful of movie prom nights. Here we find ourselves baffled with the sudden outpouring of good will toward the title character and for a few brief moments there is even the slightest of hopes for a happy conclusion. Things will eventually go sour and Carrie White will transform from joyous Disney Princess to possessed Terminator. De Palma will generate considerable unease in the audience by assigning equally tragic fates to the innocent and guilty alike, except of course for the one lone survivor indispensable to his final "it's only a dream sequence'" sequence (for which he's perfectly set the table). 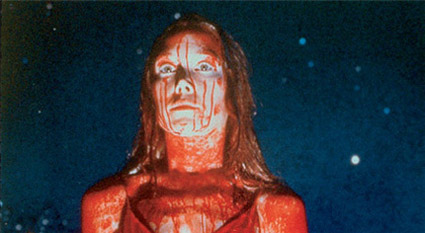 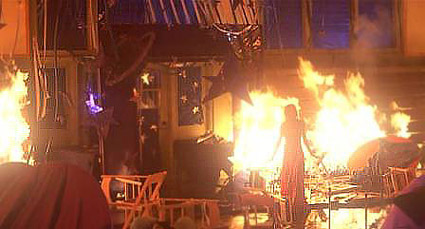 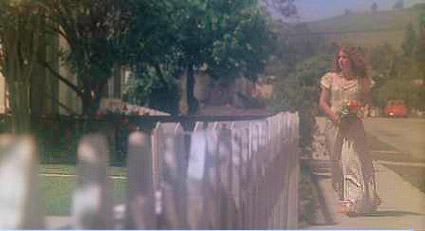 It is at this stage that the director provides Carrie's skills with new, sinister undertones as she now becomes quite able to manipulate fire. We also witness as her mother dies from wounds uncannily similar to those of a religious figure, and Carrie herself meets an inexplicable demise in a house that mysteriously implodes. Maybe it was her own guilt that made her subconsciously do all these things, but there's an earlier scene in which Margaret suggests that the source of her new-found powers is purely evil. The fact that we are never completely sure only makes it more disturbing.

My own first viewing of the "Carrie" was unforgettable for all the right and wrong reasons. At an age when I was only allowed to go to the movies when accompanied by a friend, I ended up going by myself. The trailers for the coming attractions were particularly seedy; the picture had fully done its job. As the ending approached, I didn't realize that a perfect storm had internally developed. When the title character made her final appearance in the ultimate, most copied and most effective of all "dead characters who maybe aren't so dead" sequences, I jumped from my seat and learned it is true that in some instances, your entire life does pass right in front of your eyes. Those fractions of a second were enough to realize that I was sure to die right there and then, and my shenanigans would be discovered in the worst of ways.

A first viewing like this is not easy to replicate and makes it possible to explain why the movie has lost some of its fear factor throughout the years. "Carrie" today looks very dated and it doesn't help that it belongs to the one decade in history whose fads have aged the worst (think of William Katt's matching perm and tux). Perhaps its biggest problem has to do with the fact that every facet from such a notorious movie tends to be incessantly ripped off by many that follow (in this case, even by several from its own director). This is particularly relevant in a picture whose impact depends heavily on the element of surprise. All things considered, maybe it is better this way. Going through such an experience once seems like enough.