The past is not finished with us 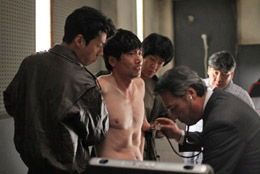 Call it a "torture film" if you want, but the South Korean film "National Security" (2012) darkly resonates with raw disturbing power. The movie itself is a fiction, but the terrible historical fact revealed through that fiction gave me a memorably uncomfortable experience at the screening room last November. We all knew what was depicted in the movie actually happened many times during that dark era in South Korean history, and the movie deeply disturbed us with its unflinching observation of authorized force brutally and mercilessly stomping on basic human rights.

When Kim Jong-tae (Park Won-Sang) is suddenly taken to a police station, at least he knows the reason for his arrest because he's been involved in political activities calling for democracy. As a prominent activist for many years, he knows the police are watching him even when he decides to take some free time with his family. He's not all that surprised when the cops approach him, and he expects he'll return to his family soon because he hasn't done anything "wrong" recently.

He's wrong about that. As soon as he arrives at the police station, he's taken away by National Security Planning agents without any legal procedure. It is Sept. 4, 1985, a day when many South Korean democratic activists were unjustly incarcerated and then ruthlessly tortured under the dictatorship. When Jong-tae finds himself locked up in a shabby room, he slowly realizes where he is: the infamous interrogation center at Nam-yeong dong in Seoul where agonized cries from other rooms are frequently heard along the corridor of hell every day. 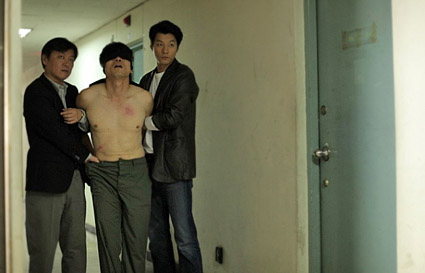 Because the police know everything he has done or said through secret wiretapping and any other means available, he has nothing new to reveal about his political activities, but that doesn't matter to them; through torture, they're determined to make him admit to anything they want. At first, they force him to write everything about himself and his life - with no chance to sleep for three days - but the intensity and barbarity of their cruel process increases day by day to extract "confession" from him.

The director Jeong Ji-yeong wisely maintains a calm, earnest, and focused attitude during the brutal scenes in his movie, while keeping his passion palpitating behind the screen. After being taken to the "VIP room," Jong-tae is broken physically and mentally through a sadistically systemic process which the torturers casually call "construction work." I must warn there are many "construction work" scenes which will make you wince and cringe. A couple sitting next to me left the screening room during one of the most intense moments.

The interrogators prepare to portray Jong-tae as a North Korean spy or sympathizer, and it occurred to me how easy it was for them to concoct a big North Korean spy plot. This tactic worked well when combined with real cases connected with North Korea--especially when a big election day was coming.

I don't deny that there were the undercover North Korean agents trying to undermine the security of South Korean society, but there were also lots of the innocent people who suddenly found themselves labeled enemies of the state, even if they were not as politically active as Jong-tae. They were forced to make false confessions, followed by more torture and false confessions in other interrogation rooms. The organizational map of a newly exposed spy ring would be prepared and, in the final step, publicized by the media.

Considering its sensational subject, "National Security" could easily have degenerated into an exploitative torture flick, but it handles its subject effectively without going too far, and its true horror comes not from the graphic depiction of tortures but from the banality of evil. Jong-tae's interrogators are the main source of black humor beneath this infuriating situation. Even as they're tormenting him, their minds are occupied with the details of their daily lives, including sports, dates or promotions, and there is a ghastly moment when they listen intently to a big important boxing match on radio while professionally going about their electronic "construction work."

This mundane depiction makes their work all the more terrible to watch, and their mindlessly apathetic attitude particularly reminded me of Craig Zorbel's "Compliance" (2012), which is about ordinary people doing horrible things, excused by false authority that cunningly pushes them towards immorality. The interrogators in "National Security" are backed by the real dictatorial authority which was, in turn, unofficially sanctioned by the US government as a part of its Cold War policy. The torturers have no serious doubts about their atrocities at all, merely believing that they're doing something good for their country (and their careers). They're just plain company men, and it is scary to think how ordinary they would appear outside their workplace. 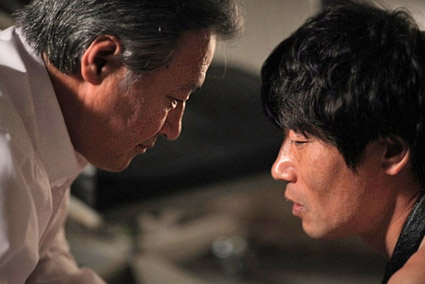 Although the dialogue in the screenplay frequently sounds corny, static and unrealistic, the limited space in the movie is packed with an intensity generated from its focused storytelling and the fearless cast. Park Won-sang stays true to his character as a good man trapped in a hopeless situation. He's thrust into many difficult scenes including the one featuring the notorious water-boarding (complicated, at one point, by mixing red pepper powder into the water .) I worried about the actor's safety, even though I knew that the crew and his fellow performers made the film with care and caution. Exhausted by the continuing tortures, Jong-tae's mind sometimes recedes into memory or hallucinations, and that provides a few short respites for him as well as the audience. Although these scenes are not necessary for the story, they provide background to help us identify with the hero.

On the other side, the small group of supporting actors playing the authorized bullies are very believable at their barbarous work. Special mention must go to Lee Kyeong-yeong, who is truly terrifying because of his cool hardcore professionalism reminiscent of "Marathon Man" (1976). Nicknamed "The Undertaker," Lee's character is an experienced torture expert who knows a lot about how to extract confessions from his subjects, inflicting maximum physical pain while leaving minimal visible injuries. Just when you think he's gone far enough, he'll stomp on you more ruthlessly than you ever imagined.

To the Undertaker, Jong-tae is merely another guy he will work over by any means necessary. We later learn that he's kept busy with many "business trips" around South Korea. He is a man who absolutely believes in what he does for the government and follows orders from above without a second thought: "If the world is changed, you can torture me then." He even casually whistles "My Darling Clementine" during his water-boarding sessions, which makes that song sound as horrifying as "Singin' in the Rain" in "A Clockwork Orange." 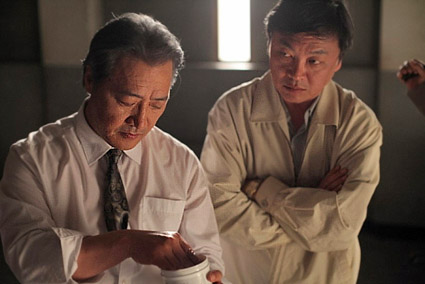 Eventually--this is not much of a spoiler--Jong-tae finds a happy ending. After three unbearable weeks in hell, he's sent to prison but is released a few years later when the democratization movement finally gains its victory after many years of brutal oppression. Although the story and the characters are fictional, the movie is inspired by the experiences of the real-life political activist Kim Geun-tae, who later became a member of the National Assembly and then a cabinet member in the South Korean government. He died in 2011 after a long struggle with Parkinson's disease, which was thought to be triggered by his experiences.

The torture expert is not a composite character. He is also based on a real-life figure notorious for his enhanced interrogation techniques. After hiding from justice for years, he eventually surrendered himself to the police and was sentenced to several years of imprisonment.. He later got out of prison as a born-again Christian pastor, but was stripped of his title because he behaved as if he had completely forgotten every atrocity he had committed in the past. When "National Security" was released in South Korean theaters, he went so far as to say that what was depicted in the film was not true.

This impertinence isn't particularly shocking to me and other South Koreans. After all, the dictator who was above him at that time is still alive and lives well in his nice house in Seoul, while denying his responsibility for many horrendous things including the killings during the Gwangju Democratization Movement in 1980. This former dictator once claimed in public that he only possessed 290,000 won (around $260) when he was ordered to pay his enormous penalty, but he still can manage to go to expensive golf clubs while surrounded by his influential friends and supporters. I'm very eager to know how this "poor" guy managed to make his children into rich and prominent business figures in South Korea. 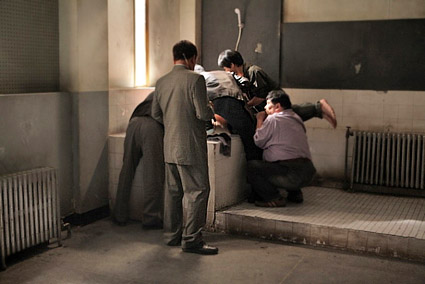 "National Security" vividly presents us one of the most harrowing chapters in modern South Korean history. This low-budget film powerfully reminds South Korean audiences of how much their society has advanced since that era--and how much its painful ramifications have still remained inside their society. Some people argue that it is time to forgive and move on, but, as shown during the final scene of the movie and the final credits, our past is not through with us yet.

Far-Flung Crrespondent Seyonyong Cho's previous review was of The Taste of Money, another film about corruption in his nation.