The smell of the taste of money

You'll probably despise the main characters in the coldly lavish new South Korean film "The Taste of Money" (2012). I was about to describe them as belonging to the top 1%, but given how shallow and hateful these people are, I think it would be more accurate to say "the bottom 0.01%." They're a plutocratic family at the very top of South Korean society. They run a big, influential conglomerate like Samsung and LG (which are also family businesses at their core). They can buy and do anything because of their wealth and the power which comes with it. In their view, they deserve to be called VVIPs, or very, very important people.

The opening scene shows us the private security safe in their company building located in downtown. What's stored inside looks and smells tasty: it's filled with so many bundles of cash that snatching two or three bundles doesn't feel like a serious crime. Maybe they also have another safe for gold somewhere in the building.

The family mansion is located just outside Seoul, where they live insulated from the world. Thanks to the first-class art direction, their sumptuous house is one of the best things about the film; the sleek, modern interior akin to an art gallery on opening day, its polished marble and pricey artwork inviting you to look around with a glass of wine (I liked the screening room for watching movies and the bookcases in the living room).

Recently, the family's company has been in spot trouble with the judiciary owing to the violation of a law, one not well explained in the movie but presumably it's connected to the inheritance process. The family regard this as a minor annoyance to be easily taken care of. All they have to do is grab some money out of the safe and hand it over in briefcases to a public servant able to take care of their problem. In this case, it's a little more difficult than that, but in the end everything will be worked out; even if they suffer a bit in front of the media, they'll just move on with their money and power intact. 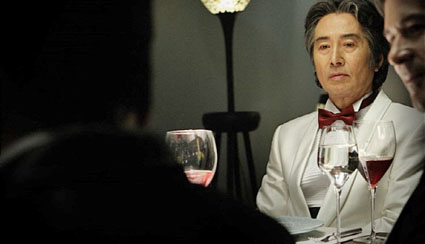 Their life and business continue as usual. President Yoon (Baek Yoon-sik), the official CEO of the company and the head of the family, and his son Yoon Cheol (On Joo-wan) meet their foreign business associate (Darcy Paquet) for an important deal further expanding and securing their wealth. All are reported to and approved by Yoon's aging father-in-law (Kwon Byeong-gil), who still exerts his power as the elder of the family. The movie slyly suggests through his attire and words that this old man had done a lot of dirty workduring his prime, and his occasional use of Japanese cannot possibly escape the notice of the South Korean audiences; what did he do for the business during the Japanese Occupation?

They and other family members are literally strangers only linked by blood and wealth. The marriage between President Yoon and his wife Geum-ok (Yoon Yeo-jeong) has gone through a lifetime of silent mutual blame and resentment. Mired in self-hate, President Yoon is sick of being an employee of his wife's family company. Geum-ok, a cruel middle-aged lady who is the de facto head of the household, is not pleased about his infidelity, but she has managed to tolerate it for long years (she took measures to prevent possible complications resulting from that). The daughter, Na-mi (Kim Hyo-jin), does not like her family and is ready for any chance to hurl sardonic one-liners at them, but she cannot possibly imagine a life without money. In this cold, loveless environment, the children from Yoon Cheol's failed marriage somehow manage to grow up pretty well as normal kids. 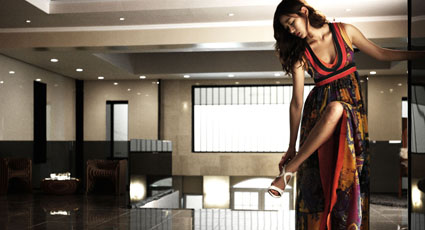 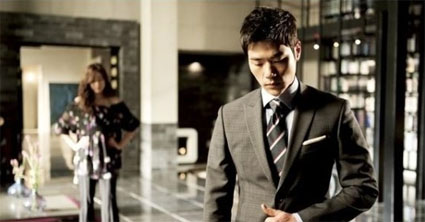 We see the people working for them mainly through the eyes of Yeong-jak (Kim Kang-woo), President Yoon's personal assistant and driver. There are two female servants dutifully moving around the house, and we get to know a bit about the old man's personal assistant (Hwang Jeong-min), who probably knows a lot about where the bodies are buried. There's also a Filipino maid named Eva (Maui Taylor), and her carnal relationship with President Yoon makes the cracks in the family more open than before because President Yoon turns out to be more serious and caring than usual in their affair. His wife becomes even more furious; it's one thing to annoy her with his latest affair, but disrupting their family façade is another thing, so it's the time for her to show who is the one with power and money. 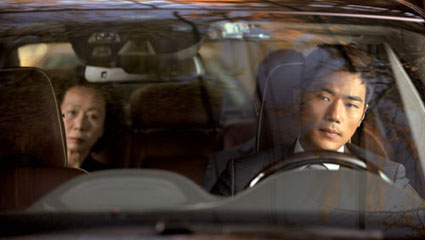 Director Im Sang-soo's previous work "The Housemaid" (2010) - an interesting remake of the famous South Korean classic thriller of the same name, was also about a wealthy family living in similar luxury. That movie seemed to look at its superficial characters with no apparent judgment at first, but then after its grotesque closing scene, I finally realized how horrible they really were and how sarcastic the film's attitude was towards them.

It can be said that "The Taste of Money" is the stylistic extension of "The Housemaid," which now looks like a warm-up exercise. (There are a few references on "The Housemaid" here and there.) The movie sniggers at its characters while observing their immorality behavior from the start, and its icy sarcasm is almost heartless even when some of them try to show feelings at their rotten hearts. A good example is shown during the scene where one character attempts to commit suicide; this is supposed to be sad and tragic at least in his view, but it becomes absurd and pathetic as he finds himself surrounded by others--and none of them thinks about calling an ambulance even though they are taken aback by his attempt.

The movie isn't even kind to Yeong-jak, one of the few characters we're supposed to identify with. There's a scene with him later in the story involving a silly fistfight and the subtext is obvious. As we learned from the Occupy Wall Street movement, no matter how much resentment we feel towards the rich, they remain in power and don't think much about us beyond looking down to say "Show some respect!" or "Get a job!"

The characters are basically ugly caricatures of wealth and privilege living in an opulent dollhouse. To their credit, some of the actors undercut the more mannered performances with a sense of humor. While Kim Kang-woo gives a bland performance as a common man gradually corrupted by his employers' wealth, by contrast Baek Yoon-sik and Yoon Yeo-Jeong rarely lose a sense of decadent fun. Kim Hyo-jin is a jaded daughter more sympathetic than her other family members, and Hwang Jeong-min is imposingly ominous in her manly suits as a woman who knows a lot about her employers' dark secrets (She was impressive as the loony hero's loyal girlfriend in "Save the Green Planet!" (2003) and was terrific as a fanatic unorthodox Christian facing a moral dilemma in "Jesus Hospital" (2011)). As a minor supporting character, the critic Darcy Parquet gamely joins in the rich decadence with his co-actors (his character's name is Robert Altman, by the way), and the Filipino actress Maui Taylor is pitiful as an unfortunate woman who only wants love and happiness in her humble life.

If you're expecting something trashy or revealing, you'll be disappointed with "The Taste of Money." Although it has several R-rated scenes featuring the good old rumpy-pumpy, the movie is essentially a cold satire and not easy to like. The story keeps you at a distance from the characters, and I wonder if it wouldn't have worked better if they'd been a little trashier with its soap drama elements. The film's ending doesn't work well, and the story feels a little too long in its glacial pace especially after its main tragedy reaches its peak; although it was nice to see some of the characters finding redemption through small acts.

I didn't include the movie in my annual list of 10 top South Korean films, but I enjoyed it to a certain degree. It's mildly recommendable because of its impressive art direction combined with a story about sex, power, greed, lust and money. Like one character says in the movie: it's hard not to be addicted to the sweet intoxicating taste of money - and it is also hard to get out of your addiction even if you know that you're being humiliated and degraded because of that.