With any convention, there are parties and San Diego Comic-Con is no different. Invited to three parties, I attended one and a third. The last party was the most elegant and a reception for the latest addition to the Yip Man legend, Wong Kar Wai's "The Grandmaster" (一代宗師)

While I still like a good dance party (even with a crowd devoid of line of dance notions), my Wednesday night Psych-O devotion left me fast asleep when I should have attended the first MTV party at Petco Park on Thursday. The Joss Whedon-only fan panel on Friday, forced me to leave my husband and dogs at the Petco Yappy Hour. At least I have photos of a Wookie walking my collies and a caricature drawn of my collies by slave Princess Leia. 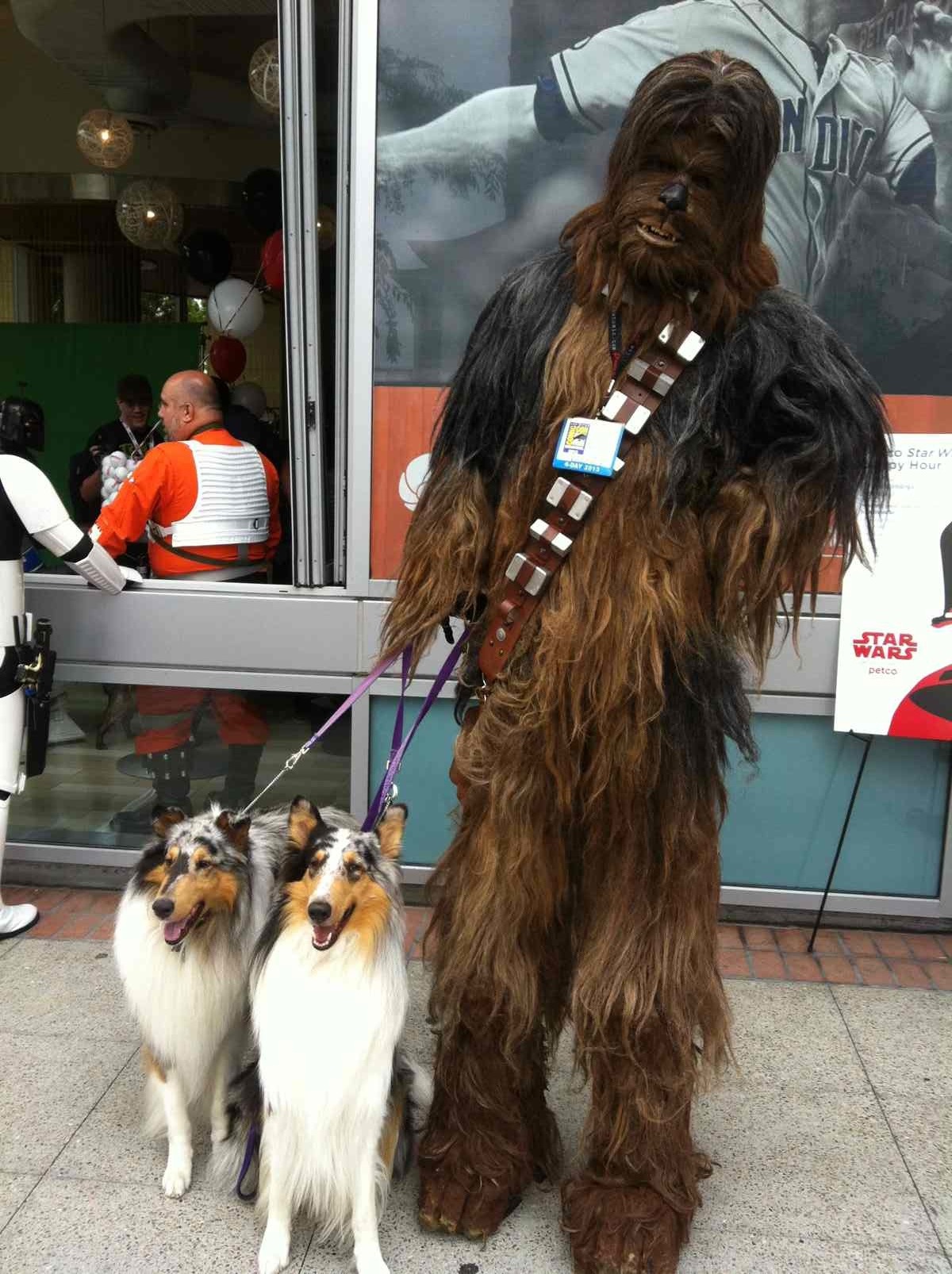 The Wong Kar Wai reception at Katsuya was an exclusive event, more well attended than the midnight showing of "The Grandmaster" later that evening. Meeting my old high school friend at Reading Cinema for the screening, I learned that the SDCC Wolverine panel turned out to be Hugh Jackman introducing a preview fan screening of the full movie for a capacity crowd. While that movie screening was exclusively for Comic-Con badge holders, "The Grandmaster" was open to the public.

The title refers to Yip Man (also Ip Man) and was the subject of controversy. While Wong's movie was still in development, director Wilson Yip's 2008 "Ip Man" was moving ahead starring Donnie Yen and the working title of "Grandmaster Ip Man." Wong felt the titles were too similar and the title of Yip's movie was changed. Wilson Yip's film was eventually released as "Ip Man" and followed up with "Ip Man 2." The supposed trilogy remains unfinished as Yen stepped down from the role. "Ip Man" won the 2009 Gold Horse Award and the Hong Kong Film Best Film and Best Action Choreography awards.

Currently available on Netflix for instant streaming, "Ip Man" is loosely based on Ip Man's life during the Sino-Japanese War. Filmed in subdued colors and a feeling of expansiveness the movie stars (Donnie Yen). The 2010 sequel, "Ip Man 2" picks up Yip Man as he teaches the martial arts in Hong Kong. "The Grandmaster" compresses the time period covered by these two movies into one movie and doesn't depict the sadistic cruelty of the Japanese Imperial Army like "Ip Man."

Since the movie "2008 Ip Man" there have been many projects on the life of this martial arts grandmaster. Yip Man (1893-1972) was born to a wealthy family in Foshan, Guangdong and learned the martial art of Wing Chun. During the Sino-Japanese war, his family lost all their wealth. By the time he had moved from his native Foshan to Hong Kong, he was poor, with nothing but his ability at martial arts to support him. His most notable student was Bruce Lee. Bruce Lee is introduced as a young boy in "Ip Man 2" but doesn't appear at all in Wong Kar Wai's "The Grandmaster." 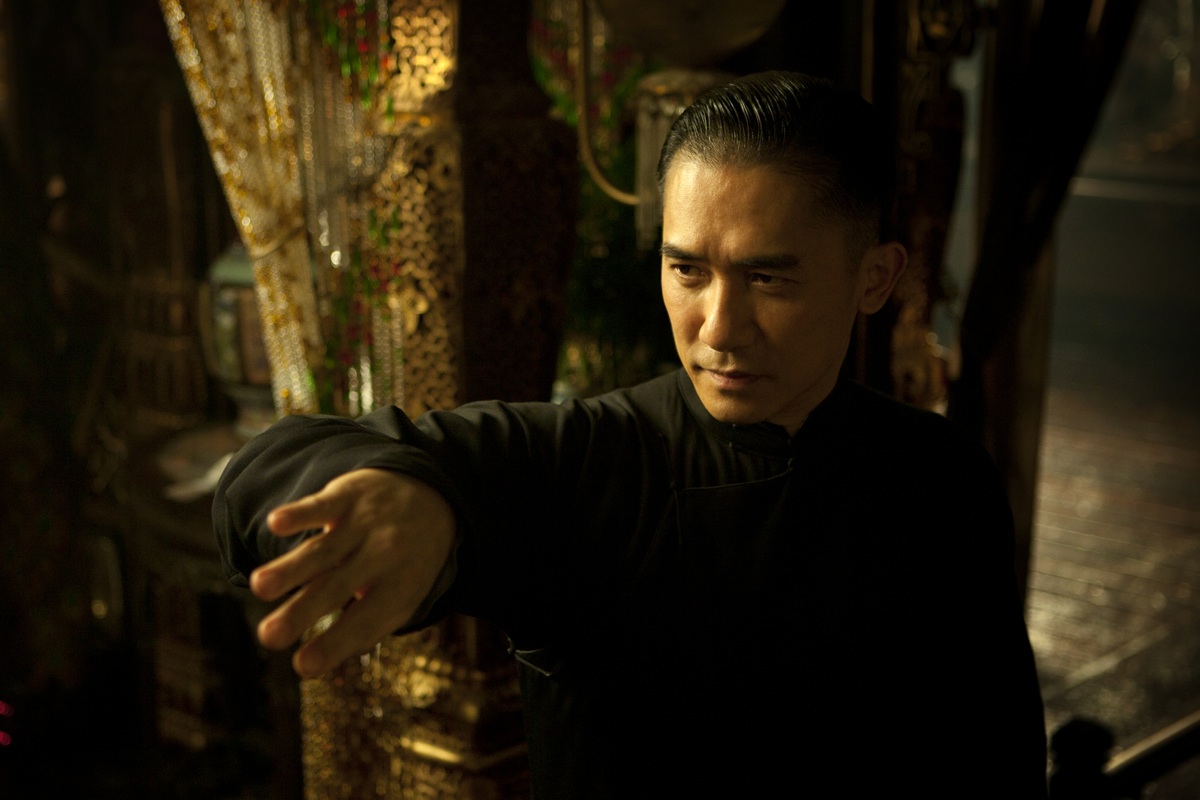 Wong Kar Wai's movie emphasizes Yip Man's (Tony Leung) relationship with two women: his wife Cheung Wing-sing and the daughter of Gong Yutian, Gong Er. The martial arts groups are divided by geography into North and South. Gong Yutian (Wang Qingxiang) has proclaimed one of his disciples Ma San (Zhang Jin) as his heir for the North, but Southern martial arts masters push Yip Man to be their champion. Yip Man is declared the winner, but Gong Er fights to preserve her family's honor.

Gong Er wins, but the challenge for a re-match remains open. Just as Yip Man decides to accept the challenge, buying a winter coat to journey north, the second Sino-Japanese War breaks out (1937-1945). During the war, Ma San collaborates with the Japanese and Gong Er (Zhang Ziyi) becomes determined to avenge this betrayal of both her father and his martial arts school.

Gong Er and Yip Man will meet again in Hong Kong where Gong Er's situation is explained in a flashback that jarringly disturbs the continuity. Gong Er explains how she exacted her vengeance for both her father and China.

Wong Kar Wai's movie shows the action in claustrophobic, tight shots and minimal high-flying wire work or CGI. China might be a large country, but the world of martial arts is small. The editing is well-paced and gorgeously filmed in saturated colors with cinematography by Philippe Le Sound. The first fight scene takes place in the cluttered streets under a heavy downpour, using water to emphasize the lyrical actions. Other scenes show a brothel as the meeting place for martial arts masters, eventually contrasting the severity of Gong Er's hair and dress with the well-made up more richly attired courtesan prostitutes.

The overall effect of the fight editing and the music is lush impressionism, and Wong Kar Wai favors beauty over realism. Zhang Ziyi's Gong Er suffers emotionally without contorting her face into expressions of anguish. Her opium addiction which leads to her death doesn't mar the beauty of her mask-like face. Yet Wong Kar Wai adds plenty of substance to his stylish rendition of the Yip Man legend. Thematically, the movie sets up a parallel between loyalty toward family and country to loyalty to one's martial arts masters. The martial arts school of 64 hands dies in order to preserve family honor and Yip Man refuses to allow his style of kung fu to become a "circus act" when he first opens up a school in Hong Kong.

In a telephone interview, Wong Kar Wai commented that in comparison with Wilson Yip's "Ip Man" his movie "tells you more about the essence of Chinese martial arts. It is not only about the philosophy. You can not understand Yip Man without knowing the background, the wisdom and rituals of China in that time, the golden period of martial arts."

Wong felt that there are so many kung fu films and he thought it would be interesting to make a film to tell the story of the grandmaster, the man who trained Bruce Lee. According to Wong, Ip Man looked like a teacher and not an martial arts hero. He wanted an actor to convey an atypical man, who belonged to a certain class and had a Western education. That's why he felt Tony Leung was ideal. Yet while Donny Yeh has a martial arts background Leung does not. According to Wong, Leung trained for 18 months prior to shooting the film and continued to train during the year the movie was filmed.

As a result, the action scenes rely heavily on the editing and Yip Man's internal struggles are more prominently featured than his fists. For SDCC, reception and screening attendees received a special comic book about the movie.

In Mandarin, Cantonese and Japanese with English subtitles, "The Grandmaster" won the Shanghai Film Critics award for Film of Merit. The movie opened in January in China and was the opening film for the Berlin International Film Festival in February 2013. "The Grandmaster" opens in the U.S. on August 23.