The Asylum Celebrates The Inmates: A Tribute to Roger Ebert and "Beyond The Valley of the Dolls" Screening, Saban Theatre, Los Angeles

A peek of floral-patterned dresses under jackets, a brief swell of psychedelic rock. The exterior theatre doors open and close.

Amongst the dressed-up crowd waiting outside the historic Saban Theatre in Los Angeles, the hints build. Exactly how would this Thursday night in tribute to Roger Ebert and his singular creation with director Russ Meyer, "Beyond The Valley of the Dolls" play out?

With enthusiasm and a well-coordinated generosity, as it turns out. In celebration of the duo's hedonistic trip through the Hollywood music and drug scenes, the film's actors and collaborators mingle with the buzzing audience to re-discover their work from over 30 years earlier. Inside the Saban's Art Deco interior, composer Stu Phillips walks the lobby while his swirling pop score plays over the speakers. Lynn Carey, the soul-bred voice behind the film's band Carrie Nations, cheers on a variety of models at a photo station in the corner. Later, she'll give a stunning solo performance herself.

As we shuffle into the vast, 2000-seat auditorium, the names do too: Kelly Mac Namara herself, Dolly Read; Erica Gavin (Roxanne); Philips's musical collaborator, Igo Kantor; and actress and Russ Meyer favorite, Kitten Natividad. Then, with a request to "behoove" ourselves by veteran actor Charles Dierkop, the evening's first act, a reunited and jubilant Strawberry Alarm Clock, takes the stage. 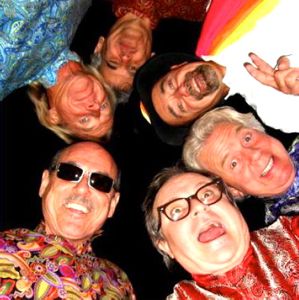 Lead guitarist Howie Anderson kicks things off by using drum sticks to strum the opening to their set. The two drum kits in the background set the pace and the band are off. After ripping through four songs, ending with the film's featured "happening" tune "Incense and Peppermints," bassist George Bunnell recounts how it was Roger Ebert who convinced them to reunite for the 2007 Overlooked Film Fest screening of "BVD."

"He said, 'Whatever it takes to get you guys together,' and we were blown away," Bunnell says. "This has been the result of it, so we couldn't be more thrilled to be here."

The co-organizers of the event, John Wyatt of Cinespia and Hadrian Belove of the Los Angeles nonprofit Cinefamily, take the stage to discuss the film. Wyatt loves the fact that Ebert, an "institution of film criticism, also penned one of the craziest, zaniest, most psychedelic roller coaster rides of a film."

They roll a ten-minute-plus reel of archival gems: a doc snippet on Gene Siskel and Ebert's beginnings on WTTW Chicago, the duo's infamous off-color promo rant on Protestants' prayer habits, and a tour by Ebert of his old cinematic haunts at the University of Illinois. Add in a reunion clip of Ebert and Meyer at the Chicago International Film festival, and it is a garrulous and warm-hearted retrospective — perfect then for Chaz Ebert's pre-film intro about her and Roger's relationship to "BVD."

"This movie was a kind of test for us when we were dating," she said, also hinting that Meyer and Ebert's Sex Pistols collaboration, "Who Killed Bambi?" may take form soon.

"I saw the movie when it first came out, but… I didn't know he wrote this crazy movie. So we went on a date, and I said to myself, 'I have to see this movie again, and if there's anything I really object to, I don't think I can date him.' So he was nervous, but when it was over I said, 'Yeah we can date. It's really groovy."

And indeed it is. Hadrian Belove recounts in his intro that he sees the film as "Eisenstein on speed" and "a great '40s noir adapted into '60s language."

This night is, in fact, my first viewing of the film, and I personally see an "Airplane"-level barrage of wit, innuendo, and occasions where innuendo is too subtle. Bare breasts seem to be equal in necessity to oxygen in this film; Z-Man (John Lazar), Ashley St. Ives (Edy Williams), and Lance Rocke (Michael Blodgett) are inhaling something else though, and it's infectiously fun. 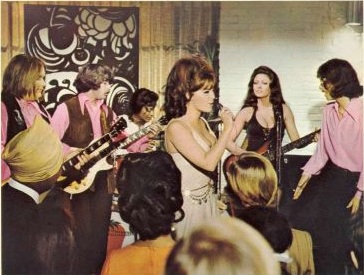 The packed crowd are all clued in on the film's satirical context and whisked away on a surreal cloud of confusion. The experience is transfixing. Dolly Read sits near me, gently poking fun with her companions at her exuberant performance, and throughout she sports a wide grin on her face. After the film, Lucy Blodgett — daughter of the passed actor Michael Blodgett — says it was important for her to be here; her father considered the cast and crew of the film to be like family.

The immense turnout of that family on "Beyond the Valley of the Dolls" attests to this statement, as does the unifying, raunchy, maniacal spirits of the two men missing this Thursday night.