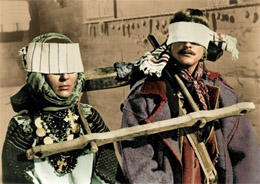 A man suited to expression but made to court contrition instead, the Georgian-born director Sergei Parajanov posed within his all-too-scarce filmography -- beginning with 1951's short "Moldavian Fairy Tale" and ending with 1988's "Ashik Kerib" -- a complete dichotomy of artistic vision and personal reality. His interpretations of the natural world's rhythms are distinctly his own, utilizing punctuations of artifice to decorate exquisite portraits of little-seen cultures set during the 18th-century. But his most critically acclaimed films, such as the tableaux-heavy "Color of Pomegranates," likewise garnered attention from Soviet authorities, and landed him outlaw status and even prison sentences with increasingly ludicrous accusations. Along with "Pomegranates," his 1964 drama "Shadows of Forgotten Ancestors" also fell at the center of controversy surrounding Parajanov, but in its blistering Shakespearian romance based on Carpathian folklore, the film offers an illuminating side to the Armenian director's aesthetic, and a perfect introduction to his stunning body of work.

Divergent to the sanctioned social realism in Soviet film at the time, Parajanov's adaptation of Mykhailo Kotsiubynsky's novel still harnesses a hallucinatory gravity that sustains the film overall. When a chopped-down tree trunk hurtles toward the ground in the opening frames, dodging awareness from the Paliychuk peasant boy Ivan nearby, the film makes the first of many decisions to inhabit nature itself through a POV perspective. Through a camera angle atop the highest branch, we witness Ivan's older brother Olexa forced into a last-second rescue, pushing Ivan out of the way and receiving the fatal blow instead. Olexa's face - frozen in terror and pain - attacks the lens into darkness, and as Parajanov cuts to the brother's lifeless body underneath the tree, the frame tints stark red as Ivan flees the scene in panic. In Parajanov's universe, his characters exist precariously to the natural world around them, even while they attempt to customize it to their needs, and only when it is too late does the perspective expressively shift from man to environment as retribution takes its course. 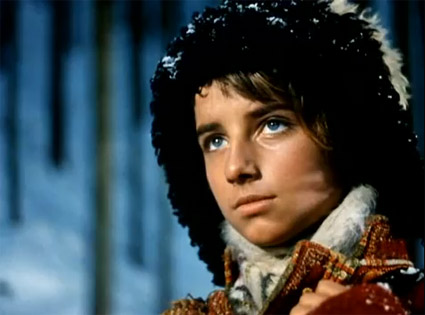 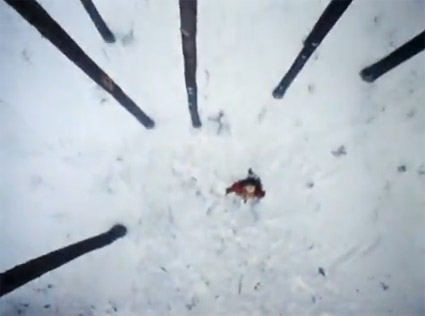 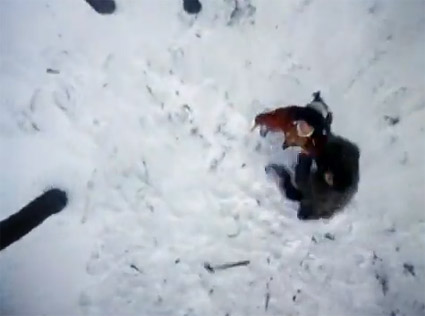 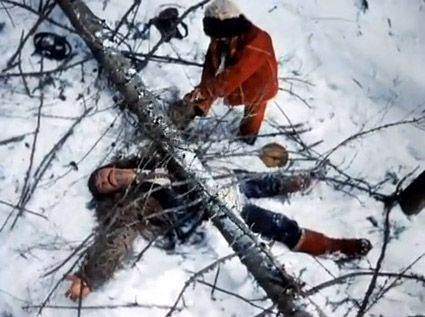 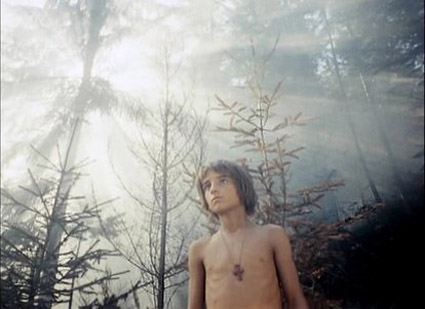 The Paliychuk family's despair only worsens shortly thereafter, as Ivan's father Petyik (Aleksandr Gaj) is killed by the wealthier Guteniuk patriarch after an exchange of petty insults grows heated. Rather than resign to a life of bitter anger like his mother (Nina Alisova) though, Ivan is driven instead towards the similarly aged Guteniuk daughter Marichka, who signals some interest in return. After initial familial loyalty breaks down, the boy and girl gradually reach deeper feelings for one another as they progress into adulthood and finally inseparable love, but the threat of their respective families and lives loom large and threatens to destroy their relationship. In these opening scenes (with Ivan Mikolajchuk and Larisa Kadochnikova playing the adult lovers), Parajanov draws the eye in ten different directions with the amount of ethnographic detail and behavior on show. He explores the textures and customs of Western Ukrainian Huzuls in specific-yet-universal terms, and while Parajanov's elusive resolve never approaches a George Smiley-esque level of layered meaning, an analogous definition of "Control" in Parajanov's film still refuses to come entirely willingly. It is then somewhat of a relief to feel elements of "Romeo and Juliet" sneak into view, as it signals for Parajanov a streamlined narrative from which to spring towards these unique elements of Huzul legend. 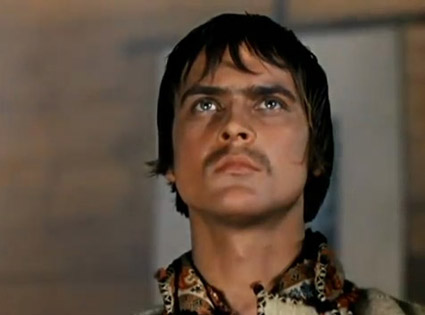 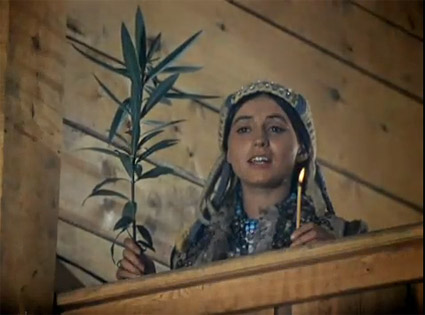 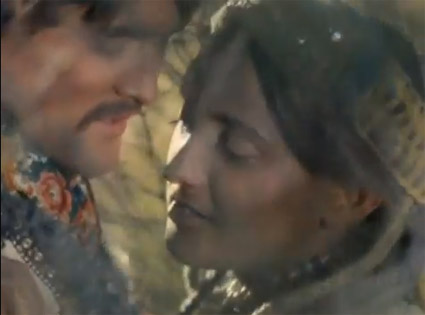 Except Parajanov slyly subverts this direction, instead opting to collapse the Shakespearean narrative into the film's first act, and examining further the tragic intentions for his characters and their lives. Following Ivan's departure from the village as a hired hand elsewhere, Marichka falls from a cliff into the rivers below while trying to save a strayed sheep, and her body is left unrecovered. 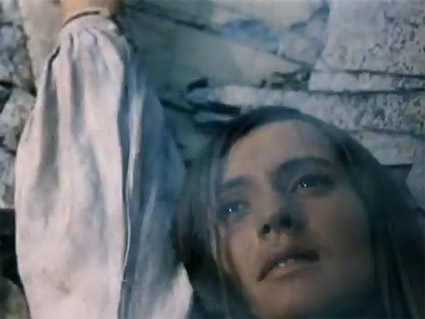 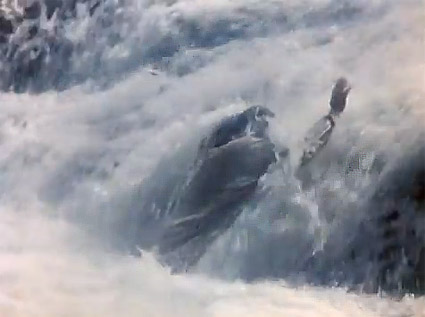 Unaware of this news, Ivan returns home to the sight of search parties being deployed, and when a group led by him stumbles upon the shore-bound body of his once-living lover, it jolts both the viewer and Ivan equally. The narrative feels thrown off a ledge and left to tumble as well, but Parajanov handles this plot reorientation dutifully, exploring Ivan's decade-long mourning with an accurately abandoned tone. However, as the now middle-aged man finds only physical love with the young, property-flush Palagna (Tatyana Bestayeva), the comparative mastery with which the first half is handled seems to doom the second, and as a result the impact is thematically rich but left narratively wanting. 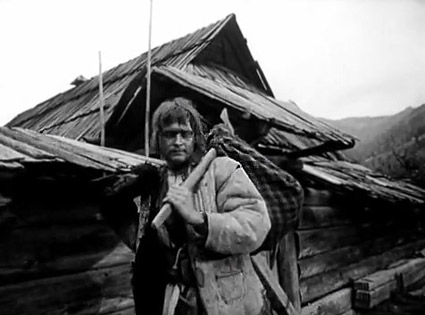 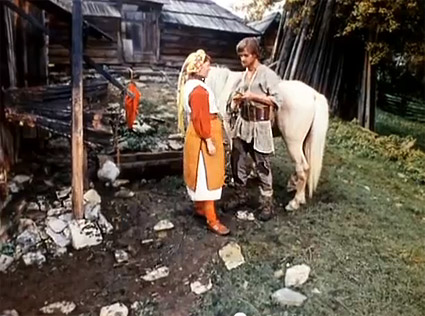 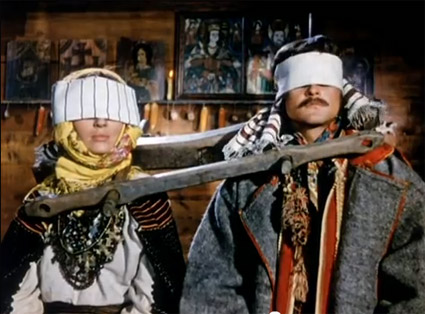 "Shadows" would normally shift in this section toward style over substance, but luckily the film blends volumes of Carpathian folklore into a tidy 90-minute running time that feels packed with nuance and spiritual resonance. Even before Palagna begins an affair with Yura (Spartak Bagashvili), a local magician who seemingly seduces her through the weather itself, Parajanov takes both Christian and pagan acts of symbolism to create a dazzling display of emotion that his visuals abundantly match. If a minimalist when it comes to exposition, he exercises more than enough maximalist tendencies in DP Yuri Ilienko's cinematography alone. Ilienko, along with cameraman Viktor Betsayev, doesn't so much glide through each scene gracefully as he does trampoline with tied shoelaces across each elemental plot twist and turn. Fish-eye and wide angles lenses madly abstract the visual logic of every scene, rendering the majority of shots simultaneously immaculate and ostentatious -- Ivan's water-bound search for Marichka aboard a monstrous log raft, or Yuri's furious attempts to quell an oncoming storm being prime instances - but they are worthwhile additions more often than not. Composer Miroslav Skorik also contributes a score equal in contribution, first announcing itself with a sneering bleach of horns but settling into a melancholic, restless beauty over time. 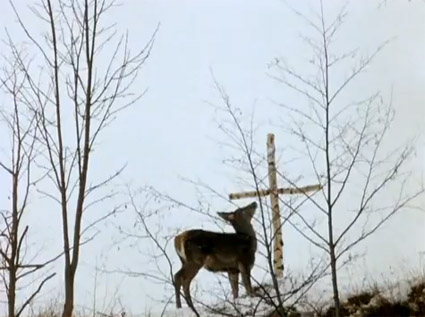 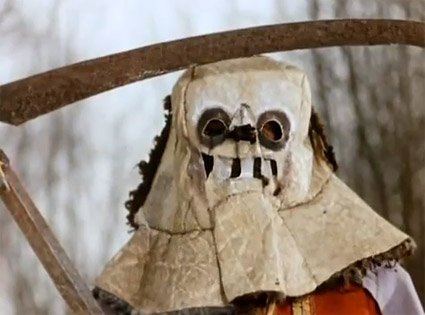 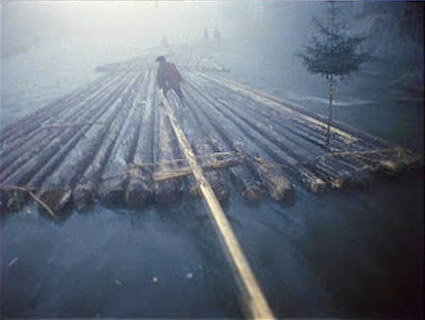 Another element of the score grows increasing in relevance, as repeatedly two voices - representing Ivan and Marichka - sing back and forth to one another, their young voices sounding hesitant yet exuberant. At the film's climax though, following a fatal bludgeoning from Yura to Ivan after Palagna's indiscretions are exposed, a heartbroken, dying Ivan witnesses the spirit of Marichka roaming the nighttime woods, and a deteriorated version of the same tune trickles out. As Marichka spots Ivan from afar, her hand slowly gliding out to greet his cheek, their cracked voices fade as her first touch greets his death, and the film stock tints red for the final time.

This occasion though, the hue bleeds over into the natural surroundings, as tree branches and bushes shine vividly with color. Ivan and Marichka are reunited at last, and the camera cuts back on the pub window, which is filled with children's faces observing the ordeal. 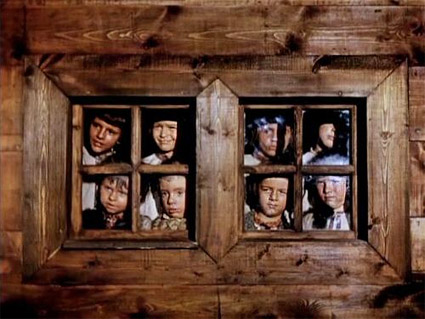 Perhaps they are shocked by the just-transpired violence or the fact of Ivan's demise, but based on the lingering emphasis devoted to their faces, Parajanov seems to be marking the instance these children finally understand the brutal conditions in which they live. Both nature and the organized village around them are fated to expire, and even as these children may hear fables of true eternal love, the one just portrayed promises a very different outcome indeed. Perhaps even at the time of filming, Parajanov glimpsed the controversy that his work would bring upon release, even as the most savage reactions carried with them an awareness of his talent. Nevertheless, "Shadows of Forgotten Ancestors" represents a man at the beginning of public and personal transformation, while his equally worthwhile later films example a man unwilling to let anything but nature take away his ability to depict it.