"Serve the nuts. I mean, serve the guests the nuts" 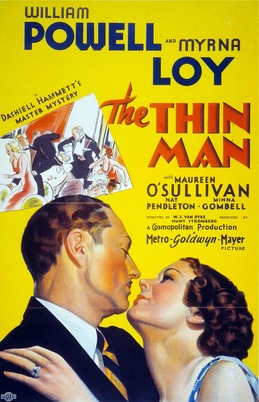 I will do most anything to avoid thinking. At the hint of strenuous thought I flee. I run like the dickens. I do not want my world to be disrupted. Seventy five percent of my energy is spent repairing a glorious cocoon of comfort.

Inside this shelter there is no overhead lighting, only lamps. There are no cold mornings or metaphysical crises. Everything is as it should be. Every question is easily answered. There you will find me licking my wounds, secretly enjoying the tang of blood and pus. Thankfully, for the health of body and soul, this cocoon is under constant siege. The valiant twenty five percent of life force that remains does all in its power to destroy a sheltering that in reality is more prison than sanctuary. This twenty five percent is Saint George. The cocoon is the terrible dragon. It is death.

As Cocteau said, "comfort kills creativity." You will find me angrily hissing this to myself all day every day. On good days I heed the wisdom of the French man. On bad ones I refuse.

On the days Saint George loses this battle I immediately review a list of movies and TV shows I have carefully programmed for pacification purposes. These are films I have seen numerous times. I know the plot and dialogue by heart and so don't need to pay any attention to them at all. I use them only for their mood elevating qualities. Some of them are actually great films ("Mr. Blandings Builds His Dream House"). Others just happen to have a lot of sunlight ("Housesitter"). 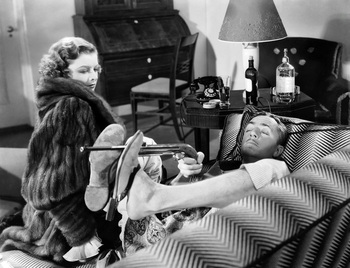 Powell & Loy made fourteen films together, but it might be said (by me) that these are the finest of both their careers. This is in no small part thanks to W.S. Van Dyke, who directed the first four Thin Man films before his death in 1943, and writers Albert Hackett and Francis Goodrich, the husband and wife duo whose dialogue is rivaled only by other married screenwriting geniuses Garson Kanin & Ruth Gordon. Together these five traded creative fluids to birth the stuff of comic legend.

The stuff of Richardson family legend.

These were the very first movies I remember seeing. They were always on, fine tuning the mood of the living room. Attempting to clean the bullshit out of the air. I am indebted to Van Dyke, Goodrich, Hackett, Powell, and Lout. They have kept my family in good spirits. Awkward at expressions of affection, we do so through Nick & Nora.

"...And you can draw your own conclusions" - what movie? My father texted last week. He has a tradition of quizzing me on movie quotes. 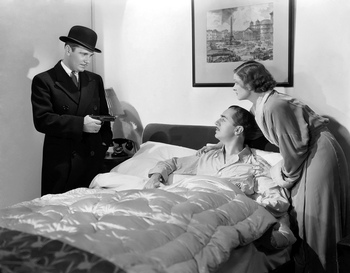 The question isn't about the movie. It isn't even really a question. It's a reminder: Don't you forget the ties that bind. We are an anxious family and we have loved "The Thin Man" since time immemorial. I don't know if the others have figured it out, but I know why:

No world is safer than the Charles'.

True, each movie involves a corpse and a killer, but the murders don't matter. After the first watch, the cases become accessories. I don't care who killed Stinky Davis. I watch for zingers from folks in evening clothes or dressing gowns. I watch for Nick & Nora.

And this is where the comfort is.

The Charleses represent an intimacy so very rare, few people believe in its existence: True security without a whisper of boredom. This is the deep serenity of requited love that maintains its libido. As Gilbert Seldes wrote in a 1937 issue of Photoplay:

"The observer wondered what on earth Nick, the detective, hoped to gain by making love to his own wife; and what his wife was after, wasting her time being in love with her own husband. Yet the picture was pleasing... And it said the one thing about love which the movies had hesitated to say for 20 years." 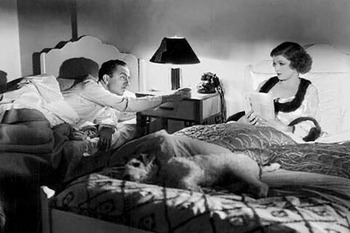 In the Charles' world, a world that I choose to believe is not fantasy, faults are never irritating. Nick's vices are referred to with a sarcasm that enjoys an opportunity for gentle jabbing. Nora's Lucy Ricardo-esque attempts at sleuthing are patiently foiled. But these aren't serious problems. Nothing threatens the Charles' union. They are a calm, but never dull duo. Sometimes, the center will hold.

The tension that arises from unequal unions, when one feels more power than the other, when one is unhappy with their situation, is wholly absent. This is the kind of conflict that usually moves a plot forward; one character pulls for something another doesn't want to give, but here it is different. The true beauty of mystery/action duos, the reason they are so beloved, is this: we get all the drama and danger of a mystery, and all the comfort and security of a healthy relationship. Two persons who are loyal to one another. We desire, perhaps more than anything else, loyalty. We want more of it in our lives, even if it's in a movie. We need to be told that ride-or-die quality really exists. Watson will never leave Holmes. Peel will remain by Steed's side (until Mr. Peel returns), Hastings will continue to aid Poirot no matter how incompetently, Nora will always be with Nick, and Asta the dog will always be with Nick & Nora. 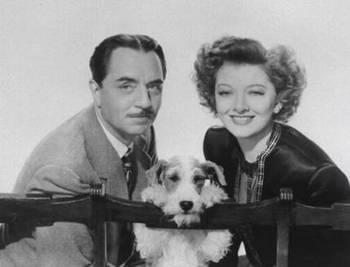 Someone I can't remember once remarked to me, upon observing someone else I can't recall: "A really rich person is someone who's relaxed in their richness. Someone who isn't worried about losing or damaging their luxuries. Someone who will eat spaghetti on a $5000 white couch."

Now if these richies manage to escape obnoxiousness, they'll likely be a blast. I know this because I know Nick & Nora. This is the stock they come from. Though, thanks to Nora's inheritance, the Charleses are of course regular rich, their real wealth lies -- wait for it, wait for it -- in their love for one another. When you aren't worried about losing it, when the permanence of something is accepted, you relax. You have fun. You enjoy your riches. Nick & Nora have fun with one another. They splash around in their love. It's not something to be handled with kid gloves. It ain't precious and thank the lord for that.

Being dainty with a thing (...like making an emotional cocoon) means recognizing a threat posed to it. This danger may be no more than the reality of gravity, but carefulness means accepting as fact a thing's impermanence. Doing so emphasizes our lack of control in the ways of the universe, and there is no place for that in cocoons.

Cocoons are all about hiding from sheer drops and shadows. Things do not end in cocoons, they just go on being. That is why Nick & Nora reign there. They are a fact.

With the Charleses on the dragon's side I really don't see how Saint George stands a chance at all... He has Cocteau though. I guess that's something.

To: Josephine Dolan Hammett (his daughter)

There isn't a great deal of news. I saw the film version of The Thin Man the other day. They made a pretty funny picture of it and it seems to be doing good business wherever it is being shown.

Kartina Richardson blogs at Mirrorfilm and this moi and tweets at WORDS @thismoithismoi.   The trailer is a little film of its own