To anyone who wants to watch an offbeat movie for the upcoming holiday season, "Rare Exports: A Christmas Tale" can be a nice mixed bag full of the goodies to be appreciated. The movie is a dark, amusing horror fantasy with Santa Claus as a malevolent supernatural entity far different from the one we are familiar with. He surely knows whether you are naughty or not, but, instead of giving a present to you, he will punish you if he thinks you are naughty, and his punishment will not be merely shoving coal in your stocking. I have no clear idea about what exactly he can do to those poor naughty children put into sacks, but I guess he is as savage as that murderous Robot Santa in the TV animation series "Futurama," one of whose memorable lines is "I'm going to tear off your skin like wrapping paper and deck the hall with your guts!"

Advertisement
This film is streaming on MUBI.com. Trial subscription available. Netflix and Amazon have it on DVD.

The premise of the film is a time-honored tradition in the horror genre - what if an old story turns out to be real? In the opening scene set on the summit of the Korvatunturi mountain in Lapland, Finland (yes, it does exist in Finland, like the Eyjafjallajökull mountain in Iceland - and it is easier to spell, by the way). Workers hired by an American named Mr. Riley (Per Christian Ellefsen) are drilling into the ground. It is 24 days before Christmas, and they finally discover something significant. Mr. Riley is excited about historically monumental discovery that will put even the pyramids in Egypt to shame. According to the local legend, not as old as you think, this mountain has been known as Santa Claus' residence (postal code: 99999 Korvatunturi), and what they have found is the grave of Santa Claus.

The focus of the story moves on to Pietari (Onni Tommila), a bright young boy who lives in the rural town near the Korvatunturi mountain. He happens to hear what Mr. Riley announces to his hired men when he sneaks into the drill site with his friend out of the curiosity we usually observe from those inquisitive boys. He instantly begins his private research with the load of books on Santa Claus folklore. I wonder where he gets these well-maintained books accompanied with the excellent illustrations shown in the montage sequence; I did not see much of his town in the film, but I am sure they have the library, don't they?

Through his diligent research, Pietari learns the disturbing aspect of the origin of Santa Claus. Long before his image was assimilated into that of Saint Nicholas to become the benevolent figure of the holiday season we know, the pagan version of Santa Claus in Finland, Joulupukki (Yule Goat), was not a nice guy at all. It was said that the local folks were sick of his annual reign of terror, so they lured him to the frozen lake. Santa was trapped below in the lake, and, in the next year, they buried him below the mountain, still frozen in the ice. I heard Yule Goat, originally a spirit of darkness, was actually less diabolical than how he is depicted in the film (He frightened children and demanded the presents instead of giving them - what a naughty dude he was), but, what the heck, we know this film is not a folklore lecture at the campus.

Pietari believes that legend as seriously as I believed the old Korean stories about a thousand-year-old fox with nine tails when I was young (I once thought my mom was that cunning fox and she would snatch my liver at night while my dad went out for business). He is on the alert, especially after finding the unidentified footsteps on the snow outside his bedroom window, but nobody around him takes him seriously.

Meanwhile, the strange incidents are happening around the town, which perplex the adults in the town including Pietari's widowed father Rauno (Jorma Tommila), and then, a mysterious old man appears out of nowhere. Unlike the adults, Pietari knows what's going on. Santa has been very much alive in the ice - and he will soon be back in business. 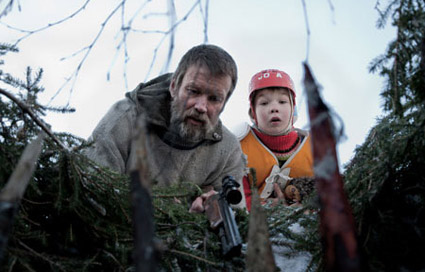 There are effective moments with mounting tension and dread, but "Rare Exports" is essentially an one-joke horror film. The movie knows that, and it takes a wise way to handle its outrageous premise; it maintains an utmost serious attitude throughout its running time. The characters, simple but well-defined, are quite earnest about the matters they come across, and we can accept that they are really threatened by the supernatural entity which is preposterous but certainly not laughable at all.

It amuses us frequently with its sly, subtle humor behind its straight face. I cannot help but be tickled by some of R-rated contents in the film - the naked running figures at Christmas night are not something you see everyday. In the film, there are several clear signs of the influence from "The Thing from Another World" (1951) and its following remake versions, and, when I watched the recent remake version later, my mind instantly connected that movie with "Rare Exports." I wondered at one point why that monstrous alien, who can perfectly imitate any organisms it absorbs, cannot imitate a certain body part frequently shown in the latter.

The technical aspects of the film match its level of seriousness. The movie has a good chilly atmosphere and the excellent wintry location with lots of snow to unfold its story. Though CGI is a little too apparent in the film, it is incorporated well inside the story while not ruining the viewing experience. It is Christmas season, so you may expect the reindeer for Santa running across that beautiful snow field shown in the film, but, unfortunately, the reindeer in this movie meet the fate which is probably worse than being annually hunted by the town people for the meat.

As a consequence, the night before Christmas becomes very desolate for Rauno and Pietari at their house, because now they will be in the financial misery due to the ruined reindeer season. Onni Tommila and Jorma Tommila are father and son in real life, and their relationship is naturally formed in their scenes. The way Rauno lets his son into his workplace next to their house is silly at first, but you can see how a thoughtful father he is to his son. As we expect from the SF/horror movies featuring kids, Rauno does not listen to his son well when Pietari wants to say something important to his dad, but he has a good reason (he has an urgent (and messy) business to deal with), and he eventually helps his son when Pietari has the plan to solve the problem of them and others. I particularly remember the detached but somehow humane conversation scene between the tired father and worried son; it is so dry that it deserves to be included in Aki Kaurismäki's films.

There is also a part that functions well as a fun adventure movie in the story, and the movie ultimately places itself somewhere between the chilly suspense and the feisty innocence. Pietari is surely our plucky young hero to root for; he is smart, and he is brave enough to do some actions I did and will not dare to do. I do not like to watch a child in possible danger, but Pietari is determined to do what he thinks should be done, and the movie becomes as spirited as he is, like the kid adventure movies in the 1980s to which "Super 8" (2011) gives a loving tribute.

"Rare Exports" is originated from the director Jalmari Heldaner's two funny short films made in 2003 and 2005 ("Rare Export Inc." and "The Official Rare Exports Inc. Safety Instructions"). You can find them at YouTube or the website of the film, but I recommend you to watch the film first, for they can be the spoilers. When the climax was over, I was curious about what the characters will do next, and then I was very amused by the film's sweet, whimsy answer to my question. I will not unwrap it before you do, but let's say Helander's short films are intended to be the satires for the commercialization of Christmas. They hit right on the target, and I enjoyed them as much as the movie itself.

Like "Bad Santa" (2003), "Rare Exports" has enough potential to be regarded as the cult film ideal for the Christmas season. The movie is a good chilly horror movie mixed with quirkiness and pluckiness for your winter night entertainments, if you have a little darker taste for Christmas tales. Come to think of it, several memorable films associated with Christmas have their own dark side and that is one of the reasons why they linger on our minds; in case of "Rare Exports," it just has a darker and bloodier side to tell an enjoyable spooky story with gingerbread.