American Masters has a special four-hours for foodies: two new one-hour documentaries on chefs James Beard and Jacques Pépin and two encore presentations on chefs Alice Waters and Julia Child. Together, these films remind us of how far food culture in the United States has come.

The first on the menu is a Kickstarter movie (which raised $29K) directed by Beth Federici and produced by Kathleen Squires: “James Beard: America’s First Foodies.” Set to broadcast on Friday, May 19, 2017, the James Beard documentary will be followed by a re-broadcast of “Julia! America’s Favorite Chef.” The following Friday, May 26, 2017, American Masters will present the premiere of “Jacques Pépin: The Art of Craft” which will be followed by “Alice Waters and Her Delicious Revolution.”

You probably have heard the name James Beard (1903-1985) and his foundation’s annual awards are the Academy Awards for chefs. The film uses illustrations and quotes from Beard’s cookbooks on intertitles and archival photos and film to give us an idea of just who and how big he was. The documentary doesn’t shy away from an essential ingredient of his private life: Beard was more out-of-the-closet than was comfortable for his college. He was a failed actor, but a successful cook and warm-hearted friend.

Beard was born and raised in Portland, Oregon. Federici had just moved back to Portland when her co-producer Squires was at a luncheon at the James Beard Foundation. They wondered: How is it possible a feature-length film had not been made about Beard? According to Federici, Beard was born at a time when only really rich people stayed in hotels; ordinary people stayed at boarding houses. Beard’s mother ran a boarding house and it was a competitive market. Food was important. “She would actually bring chefs from France, but she kept losing them to San Francisco” as they got situated and looked for better opportunities. She decided to train her own staff.

Federici was surprised that Beard success only came after failure. Federici said, “He really started out wanting to be an opera singer. He wanted to be an actor. He was in “The King of Kings” and was friends with Agnes deMille” (director Cecil B. DeMille’s niece).

Throughout the four-hours you feel the interconnectiveness of this foursome. Both Beard and Jacques Pépin feel the social side of the meal is important. Beard worked with Julia who had better rapport with the audience. Julia also worked with Pépin on a cooking show. Waters and Pépin emphasize quality ingredients. Beard, Pépin and Waters focus on seasons and eating local. Beard wrote “Food is our common ground, universal experience.” 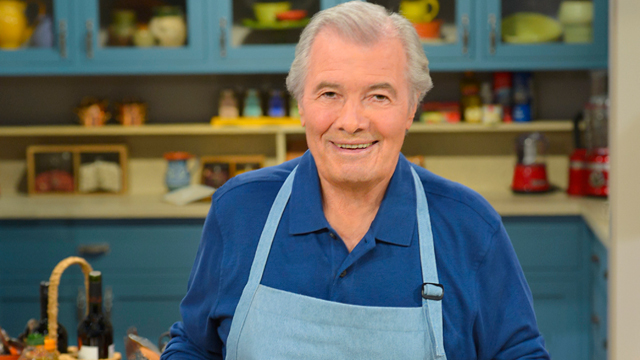 Although he was on the road earning a living, at one point over 30 weeks a year, Pépin was critical of hearing people saying “We’re going to cook for the kid once every two weeks. See how far we’ve gone.” Further he complained is that families have meals, but “they don’t even consume it together, that’s the worse part of it.”

In the Pépin documentary, Anthony Bourdain (“Parts Unknown”) comments, “I believe before you have sex with another human being, you should be capable of preparing them an omelet to Jacques Pépin’s standards the next morning. Wouldn’t the world be a better place?” Pépin came to the US “at a time when chefs were the help.”

Waters talked about how much time she put into making lunches and, as you’ll see in the documentary, Pépin had a show where he teamed up with his daughter. Food is for building good memories between family and friends.

Both Pépin and Waters were critical of the recent trend in chef reality TV shows that pit people against one another and are more about hell in the kitchen than harmonious relationships. Waters noted such programs are “trying to entertain us by pitting us against each other when we're trying to figure out how to cooperate.”

Pépin noted that in France there’s a professional competition for everything from cabinet makes to chefs (as portrayed in “Kings of Pastry”) where it is a question of “getting to a certain level.” More than one person can win. Pépin feels, “you go into a great restaurant with a camera and ther eis nothing happening. Nobody’s yelling at each other. You don’t have the excitement and confrontation that people like on TV.” Confrontation is “the opposite of what cooking is about.”

Waters agreed adding, “There’s a beautiful rhythm you can get into in a kitchen.”

Pépin noted, “There's a great deal of giving and taking. There’s a much better way of teaching than that acrimony. It kind of depresses me when I see that on TV.”

Waters said, “I think it really pushes people away from cooking. You’re not actually using that and going into the kitchen to cook. You’re using it as entertainment.”

Pépin related, “It’s a happy kitchen when you can see that the young people are smiling and happy. They want to do what they are doing. You don’t do it for money. Unless you love it, you’re not going to do it. They are going to produce good food because they love it.”

Waters and Pépin do like the rise of competitive high school cooking teams. Waters has done a class where there are three tables and ten kids at each table. The kids are judged on “how well the work together, presentation and taste and how well they clean up after they finish.” She hopes that PBS will some day to a “cooperative Iron Chef show where really important chefs like Jacques judge kids cooking in that way.”

Waters noted that chef team competitions allow kids who won’t shine in athletics a chance at the spotlight. A few months after these January interviews, a small town high school in Northern California, Greenville High, won the state title at the California ProStart Cup in Pomona, California.

As for movies on chefs, Federici, Pépin and Waters all immediately mentioned the 1996 “Big Night” which starred Tony Shalhoub and Stanley Tucci. Federici commented, “My grandparents immigrated from Italy and opened a restaurant in 1920. It resonated because my parents went through the same thing. They wanted to cook more interesting things, but you have to give the customers what they wanted.” Pépin noted another tie-in, Tucci who co-wrote (with Joseph Tropiano) and co-directed (with Campbell Scott) “Big Night” narrates the Pépin documentary.

“Jacques Pépin: The Art of Craft” premieres on Friday, May 26, 2017, and will be followed by “Alice Waters and Her Delicious Revolution.” Check local listings.